From the Ozarks to the lowlands, the White River represents the diversity of Arkansas. by Rex Nelson | October 18, 2020 at 7:59 a.m. 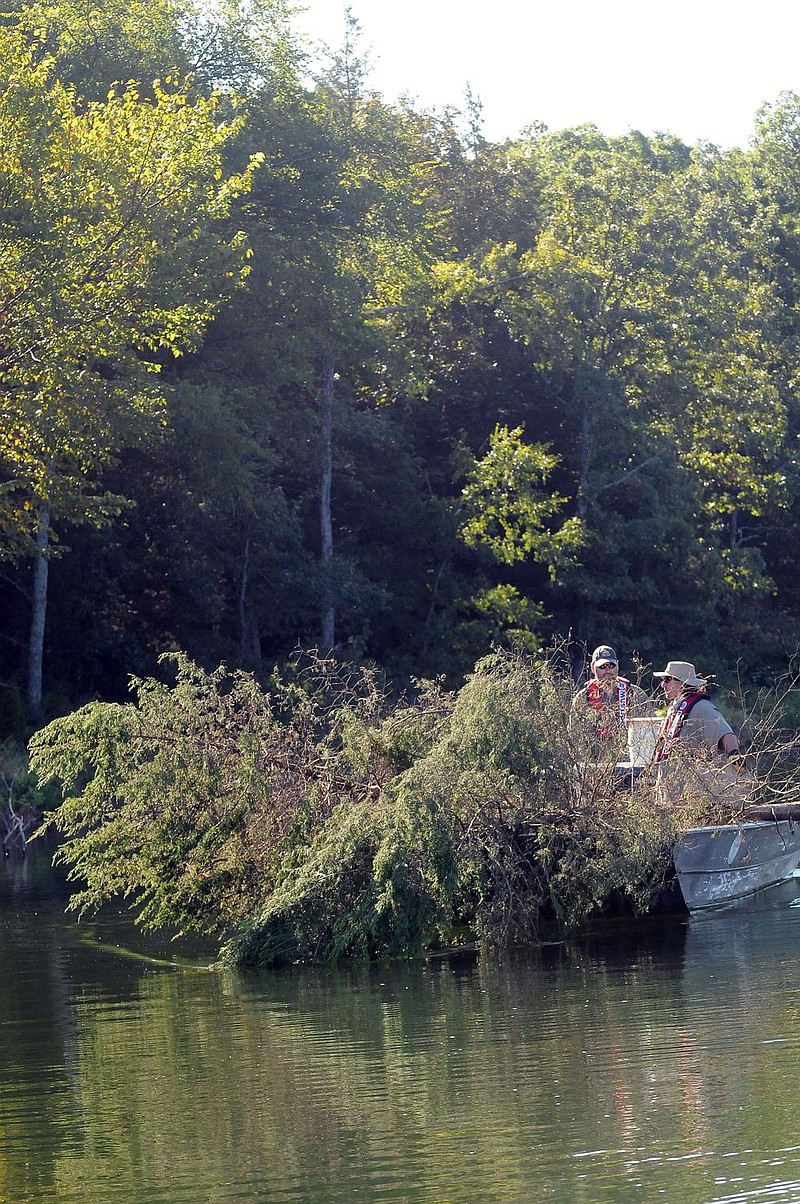 Jon Stein (left) and Kevin Hopkins, fisheries biologists with the Arkansas Game and Fish Commission, transport cedar trees cut from Deer Island and Bear Island at Beaver Lake—created by the construction of Beaver Dam on the White River in Carroll County in 1955—to sub- merge them in the lake for fish habitat. (NWA Democrat-Gazette/Flip Putthoff)

My mother was born in 1925 in the old White River town of Des Arc. Until her death at age 90, she often talked about what it was like to grow up during the Great Depression along the lower White.

There were the boat people who lived on the river and made their money through fishing, trapping and gathering mussel shells that would be stamped into buttons. There were the sportsmen who came from Little Rock and Memphis to fish on it.

Des Arc, one of the state's earliest settlements, took its name from a bayou just north of town. The French had used a term meaning "bow" or "curve" to name the crooked stream. Frenchman Francis Francure received a Spanish land grant and lived on the land beginning in 1789.

According to the Central Arkansas Library System's Encyclopedia of Arkansas: "The city's placement along the White River proved especially profitable in the early years, and Des Arc was at a point at which timber was shipped downstream to other markets. Trees common in the area included walnut, hickory, ash and other hardwoods. In the 1850s, the Butterfield Overland Mail Co. ran through Des Arc, thus making it an important stop for mail and travelers between Memphis and points west."

Des Arc was also a steamboat stop. By 1900, the Des Arc & Northern Railroad had been completed, making it even easier to transport the abundant virgin timber out of the area. Des Arc's significance grew as rice began to be cultivated on the adjoining Grand Prairie in the early 1900s. More than 4,000 acres of the prairie were in rice production by 1906. Des Arc's population more than doubled from 640 in the 1900 census to 1,307 in the 1920 census.

My grandfather, who died in the hot summer of 1980 at age 96, came to prosperous Des Arc in the early 1900s. He later owned the city's hardware store and its funeral home. He served for a time as the Prairie County judge. He would tell stories of the impact the White River had on that region of Arkansas. I spent parts of each summer as a boy at Des Arc and grew to cherish the rich history and colorful characters that mark the lower White River region.

The White is the quintessential Arkansas river--beginning in the Ozarks of northwest Arkansas, meandering through southern Missouri, and then returning home to Arkansas as it transforms from a mountain stream into the big, slow lowland river that I came to love at Des Arc. In its diversity, it represents the diversity of the state it mostly calls home.

The 722-mile-long river flows out of Madison County toward the Fayetteville area before turning north. The White enters Missouri before coming back into Arkansas and heading south. It leaves the hills at Batesville. This is the beginning of the lower White as it flows south for another 295 miles through the Arkansas Delta, passing Augusta, Des Arc, DeValls Bluff, Clarendon and St. Charles before emptying into the Mississippi River.

"The river's course lends itself to a variety of environments--from the seasonal, fast-flowing headwaters of the upper White to the wide, slower-moving stretches farther down the river," writes Aaron Rogers for the Encyclopedia of Arkansas. "Between these two extremes are a variety of smaller streams and lakes that provide excellent habitats for trout fishing. Other species such as bass and catfish are also present. Tributaries of the upper White include the Buffalo and Little Red rivers. Tributaries of the lower White include the Black and Cache rivers.

"Many of these smaller tributaries have their own recreational and wildlife protection areas maintained under the supervision of various departments at the state and federal levels. During the Great Flood of 1927, the White flooded below Batesville, and areas to the north and east in Randolph, Clay and Lawrence counties were also flooded by White River tributaries. Torrents from the Mississippi River even caused the White to run backward at one point."

Keelboats were an early mode of transportation along the White, followed by steamboats.

"Above Newport, sharp bends, rapids and low-water levels along the river during the summer months--as well as the additional manpower required to move keelboats upriver against the current--generally allowed travel only downriver," Rogers writes. "The lower White was navigable in both directions from the Mississippi River to Newport. The river served as a highway carrying supplies and crops from the frontier settlements to river towns such as Memphis and New Orleans.

"Steamboat travel on the upper White began in 1831, and towns along the upper White in Arkansas and Missouri continued to dredge and clear the river for steamboat traffic until at least the early 20th century. After the Civil War, steamboats were gradually replaced by railroads."

Dams on the upper White and its tributaries changed the river forever. But those dams also resulted in Arkansas becoming one of the top trout-fishing states in the country. The impoundments the dams created increased tourism to the state and made Arkansas a magnet for retirees from the Midwest.

Private power companies began exploring the possibility of building dams on the White in the early 1900s, but that never occurred. Following another devastating flood in 1937, Congress approved the Flood Control Act of 1938. That legislation authorized the construction of flood-control reservoirs in the White River basin.

The effort to build dams on the White was led by Congressman Claude Fuller and later by Congressman Clyde Ellis. In 1941, Ellis succeeded in obtaining funding along with additional authorization for hydropower for a dam on the North Fork River just upstream from where it runs into the White River in Baxter County.

The Little Rock District of the U.S. Army Corps of Engineers awarded the construction contract for the dam to the Utah Construction Co. and the Morrison-Knudsen Co. Construction began in the spring of 1941, creating Norfork Lake. The lake covers parts of Baxter and Fulton counties in Arkansas and part of Ozark County in Missouri.

"The Corps chose the dam's final location from four possible sites, 4.8 miles upstream from the town of Norfork at the confluence of the White and North Fork rivers," writes Scott Branyan of Rogers, a longtime fly-fishing guide on the White River. "A spur railroad line off the Missouri Pacific was built from Norfork to the dam location to move equipment, materials (including 1.2 million barrels of Portland cement) and nearly 2,000 tons of reinforcing steel--not to mention gates and miscellaneous metal. During construction, a total of 27,000 railroad cars were moved along the spur.

"Because of wartime shortages, spillway gates were installed sometime later. In the meantime, concrete bulkheads were used to raise the lake level above the bottom of the spillway openings to 656 feet above mean sea level. Rains caused the lake level to exceed the temporary bulkhead elevation by five feet at least twice in April 1945. ...

"During 1940, several hundred small farms were abandoned in Baxter County and left in foreclosure. However, construction of a dam meant prospects for work during the Depression. As soon as word of the approval of Norfork Dam appeared in the newspapers, locals began contacting Ellis to inquire about jobs."

The average number of workers employed was 815. The dam and powerhouse were operational by 1944. A second generator was in use by February 1950. Construction of nearby Bull Shoals Dam on the White River began in 1947. The dam is about 10 miles west of Mountain Home.

"At the time of its construction, Bull Shoals Dam was the fifth largest in the country, and its powerhouse was the largest building in Arkansas," Branyan writes. "When Bull Shoals Lake is at the top of the conservation pool, there are about 740 miles of shoreline. This is increased to 1,050 miles at the top of the flood-control pool."

Powerhouse construction began in September 1950, and generation started in September 1952. President Harry S. Truman spoke at a dedication ceremony for both Norfork and Bull Shoals dams on July 2, 1952.

"The completion of the dam and reservoir immediately began to affect the local economy," Branyan writes. "Media coverage attracted attention to the region and resulted in the growth of the tourism industry. In 1940, there were only 13 businesses in the area that provided overnight accommodations. By 1970, 300 such establishments could be found. Assessed taxable real estate values, per capita income and manufacturing payroll rose dramatically in the following decades."

Further upriver, Table Rock Dam was built about eight miles southwest of Branson, Mo. Table Rock Lake is primarily in Missouri but partially in Arkansas. It was the third of the massive Corps projects in the river basin following the construction of Norfork and Bull Shoals dams. Table Rock Lake covers parts of Taney, Stone and Barry counties in Missouri and extends south into parts of Carroll and Boone counties in Arkansas.

"Congress authorized Table Rock Dam in the Flood Control Act of 1941, but construction was delayed by World War II, the Korean War and the building of Bull Shoals Dam," Branyan writes. "The Little Rock District of the Corps began work in October 1954. The project's name comes from a large rock outcrop in Missouri, a well-known tourist landmark in the early 1900s."

Still further upriver, Beaver Lake was created by construction of Beaver Dam in Carroll County. The lake is 73 miles long and almost two miles wide at its widest point. It reaches from about Fayetteville to the dam near Eureka Springs, covering parts of Benton, Washington and Carroll counties.

Congress authorized its construction in 1954, and the Corps later chose a location near Busch in Carroll County. The first construction funds were included in a 1959 bill. The bill was vetoed by President Dwight Eisenhower because he had been told by the Southwestern Power Administration that the project was only marginally justifiable. Congress overrode the veto.

Dam construction began in November 1960. Construction of the powerhouse started in 1963. Power generation commenced in May 1965, and the reservoir reached its operational pool in 1968.

"Beaver was one of the first Corps reservoirs in the country to provide for municipal and industrial water supply," Branyan writes. "This additional use was authorized by the Water Supply Act of 1958, provided a local sponsor could be found to pay for the extra storage capacity. The cities of Rogers, Bentonville, Fayetteville and Springdale agreed to buy water from the newly formed Beaver Water District, which paid a share of the cost of the project."

The other Corps project in the White River basin was construction of Greers Ferry Dam on the Little Red River, a White River tributary. Construction of that dam began at about the same time that work started on Beaver Dam. Greers Ferry was dedicated on Oct. 3, 1963, by President John F. Kennedy in one of his last public appearances before his assassination in Dallas the following month.

Greers Ferry Lake covers more than 30,000 acres in parts of Cleburne and Van Buren counties and became a major tourist attraction for the state. Thanks in large part to the lake's construction, Cleburne County's population grew from about 9,000 in the 1960 census to almost 25,000 by 2000.

Below the dam, the Little Red River flows to the southeast, emptying into the White River near Georgetown. This is the lower White at this point, a far different stream from the clear, cool upper White of the Ozark Mountains.