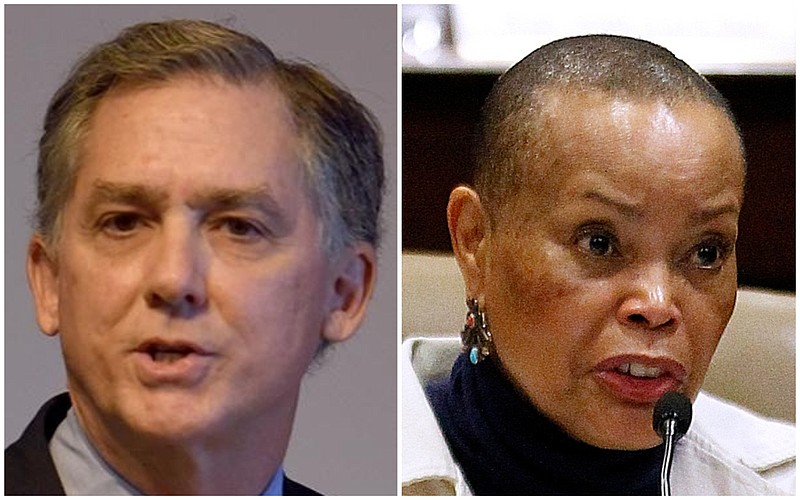 With Election Day nearing, Republican U.S. Rep. French Hill and his Democratic challenger, state Sen. Joyce Elliott, both say they have the experience and the skills necessary to succeed on Capitol Hill.

Arkansas' 2nd Congressional District has been the state's most competitive in recent years. With millions of dollars being spent on both campaigns, it is poised to be a battleground again.

Hill, 63, is the former chairman and chief executive officer of Delta Trust and Banking Corp., a Little Rock financial institution he founded and led before its purchase in 2014 by Simmons First National Corp. of Pine Bluff.

Elliott, 69, spent 30 years as a public school teacher, then ran for the state Legislature, winning first the House and then the Senate.

One of the two Little Rock residents will be elected on Nov. 3 to represent Pulaski, Saline, Faulkner, White, Perry, Conway and Van Buren counties.

"I think that's a common-sense-oriented approach that I get from 40 years of having been in business," Hill said. "People in business who come to Congress are there to solve problems, not just fight over either the tactics or the process. They are there to find solutions to national challenges and propose those solutions and get them enacted into law."

The Democrat also is emphasizing her life experience: not just her decades in the classroom and her time in the General Assembly, but also her journey out of poverty.

Elliott, one of the first students to integrate Willisville High School in Nevada County, grew up with her mother and five siblings in the house they shared with her grandparents.

Today, nothing but memories, and the home's front steps, remain.

Elliott, who earned her hard-fought high school diploma in 1969, hopes to be the first Black Arkansan to represent the state in Congress.

The Democrat says she's a better candidate now than she was in 2010, when she ran for the congressional seat and lost to Republican Tim Griffin, 57.9% to 38.3%. Her campaign has financial resources that were lacking last time and voters know her story, she said.

"People know that I know what it means to grow up in rural areas and grow up poor, and yet still have aspirations and have to work to make sure to get some place. They also know that I'm not anti-big business but I do prioritize people over corporations. ... Folks are struggling and they know I understand that struggle," she said.

Democrats haven't held the seat since January 2011, but they've spent millions trying to recapture it.

In both elections, third-party candidates finished far behind.

"This is just a closely divided district," Webb said. "[Hill] has always had close races and when the votes are tallied, he wins, and we expect him to have a win on election night."

Though he's served just six years in Congress, Hill has Washington experience that stretches back decades.

From 1982 until 1984, he worked for U.S. Sen. John Tower, R-Texas, and also served as a staff member on the Senate Banking, Housing and Urban Affairs Committee.

In addition to his time on Capitol Hill, he also gained experience in the executive branch, serving as a Treasury Department deputy assistant secretary and as executive secretary to the President's Economic Policy Council during the presidency of George H.W. Bush.

He currently serves on the House Financial Services Committee. In April, he was appointed to the Congressional Oversight Commission, which is monitoring $500 billion in Treasury Department funds.

In this election cycle, Hill has raised more than $3 million, while Elliott has received more than $2.5 million. On Sept. 30, with the campaign nearing the final stretch, Hill had cash on hand of more than $1.5 million; Elliott had $586,103.

Bankers' and teachers' groups are buying ads to influence the race.

Party super PACS are pouring in large amounts as well.

"She's got as good a shot as anybody's had in a long time," he said. "It will not be a shocker if we see a Joyce Elliott win on Election Day."

In the closing days, the Hill campaign is portraying Elliott as a tax-raising career politician, more attuned to House Speaker Nancy Pelosi and her party's progressive wing than to Arkansans and their needs.

A Hill campaign leaflet last week called Elliott "as dangerous as they come."

"If Joyce Elliott were elected to Congress, she'd be a member of the Democratic conference and she'd be a member of the Congressional Black Caucus and her first vote would be for Speaker Pelosi to be the speaker of the House. And, in my view, her second vote would be to raise taxes on all Arkansas families, something she's very familiar with since she's done that here in Arkansas," Hill said in an interview.

Hill stressed his own support for the 2017 Tax Cuts and Jobs Act, which instituted a temporary cut on income-tax rates; they are set to expire in December 2025.

"What did we do? We took low-income taxpayers off the rolls, we lowered rates, we added the child tax credit, which should be made permanent, and those are important things for family income," he said. "The average Arkansan kept about $2,000 more here after the Tax Cuts and Jobs Act."

Asked if he views Elliott as a radical, a term he has used to describe other Democratic leaders, Hill said her views are out of step.

"I see her positions she's taken in the Legislature and her positions she's taken over the last 10 years or so since she ran for this job in 2010, as in alignment with [U.S. Sen.] Bernie Sanders and the more liberal, left-leaning policy proposers inside the national Democratic Party, and I believe those ideas are more radical than Arkansas values and more radical than the mainstream of the United States."

Asked to respond, Elliott said Hill's "divisive language" won't do anything to fix the nation's problems.

"When I was 15 and integrating a school and having to live through all that, [I learned] you cannot start a conversation about coming together by calling people names. That's not a good starter," she said.

The principles Elliott is espousing, she said, are mainstream.

The two candidates see differently on a wide range of positions, including coronavirus pandemic policy, 911 funding and abortion.

"There could not be a greater contrast between two candidates than there is between Congressman Hill and his opponent," Webb, the Republican chairman, said.

A Hill campaign mailer described Elliott as a "pro-abortion extremist," and listed a number of abortion restrictions she has opposed.

Among them: the Down Syndrome Discrimination by Abortion Prohibition Act, which prohibits a doctor from performing an abortion if it is being sought "solely on the basis of" a test, diagnosis or belief that "an unborn child has Down Syndrome."

"Sen. Elliott, during her time in the Legislature has effectively been against any attempt to regulate abortions. That's just not been her position. And that's not in keeping with the majority of Arkansans that value life, particularly the most innocent of life," Hill said.

"Legislatively, we are not in any position whatsoever to make decisions for these families and for women. These are medical decisions," she said. "Reproductive freedom is something that is just as important as any other freedom when it comes to what happens to us medically."

Hill has also criticized Elliott for voting to raise cellphone taxes that funded improvement to the state's 911 systems.

The bipartisan legislation, sponsored by a Republican, enjoyed near-unanimous support, passing the Republican-controlled House 85-0 and the Republican-majority Senate 29-3 before being signed into law by the state's Republican governor, Asa Hutchinson.

"It was proposed by lobbyists representing county judges and the cities, and people in the Legislature went along with it, but it doesn't mean it was a good idea, just because it got a bipartisan vote," he said.

Hill says the money could have come, instead, from the state's surplus funds.

"If Republican or Democrat, in my personal view, they should have proposed an alternative to imposing a regressive tax on the poorest citizens of the state," he said.

Elliott said 911 funding was suffering as people switched from landlines to cell lines, so an alternative source of revenue was needed. One-time surplus dollars would not have fixed the problem because the expenses aren't one-time expenses, she said.

"This was an issue that was brought to us, as legislators, by the [sheriffs], by all the law enforcement and by people in the medical field, everybody, all the people who understood that our 911 system was about to crash came [and said,] 'We have to have a solution', and that's what we did," she said.

"I think the administration and Gov. Hutchinson have worked together to marshal unprecedented resources to fight the virus in a public health crisis and to help get the economy back open. I really commend the Federal Reserve for their quick action to stabilize the markets in March," he said.

"I commend the bipartisan leadership in the House and Senate to come together on the [Coronavirus Aid, Relief, and Economic Security] Act and the other bills that helped families and businesses. And I commend the administration for getting money out to families, getting money to our small businesses, getting money to our caregivers, our hospitals, getting [personal protective equipment] manufactured rapidly using the Defense Production Act and ventilators, and providing daily updates to our governors," he said.

Elliott faulted the White House for its handling of the crisis.

"We don't have leadership from the top, and right now, it's been so compromised, I don't know if we can ever get it. President [Donald] Trump just failed to lead on something, I think, that could have galvanized the country," she said.

"Generally speaking, when something like this touches the whole country, that is a galvanizing moment ... for us and we tend to come together," she said. "He chose to use it for division."

Trump failed to listen to the scientists, she said.

"One of the most hurtful things the president's done to this country is the failure on covid because it didn't have to be this way," she said. 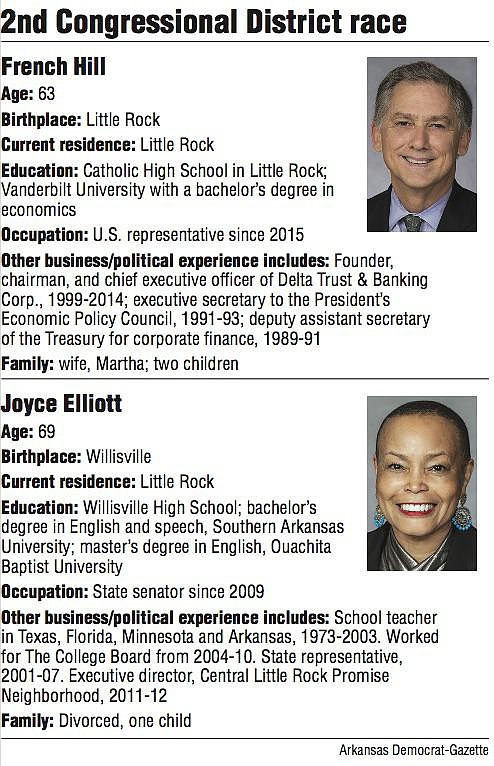