Little fanfare at the Arkansas State Fair this year

Virus rules have kids showing off livestock to sparse crowd by Joseph Flaherty | October 18, 2020 at 9:16 a.m. 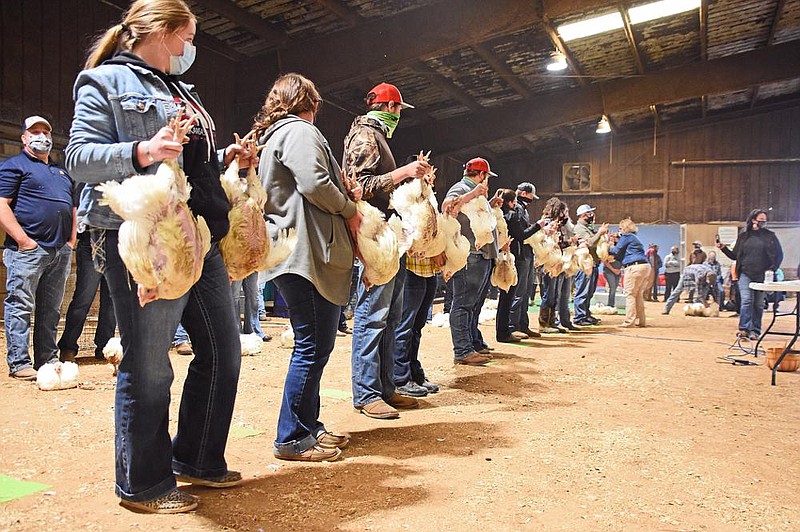 Competitors hold their broiler chickens for judging Saturday during the Livestock Show at the Arkansas State Fair in Little Rock. More photos at arkansasonline.com/1018livestock/. (Arkansas Democrat-Gazette/Staci Vandagriff)

A scaled-back version of the State Fair was underway this weekend, as livestock showings were held Saturday on the fairgrounds with junior competitors and their supporters in attendance, but hardly anyone else.

Over the summer, the board of directors of the Arkansas Livestock Show Association announced members had voted to cancel the fair this year in light of the coronavirus outbreak. The events of this year's fair -- mostly junior livestock competitions -- were scheduled to run from Thursday until next weekend.

In a news release publicizing the cancellation in July, fair president and general manager Doug White suggested that holding a fair with the customary "food concessionaires, carnival rides and games on the midway, commercial exhibitors, livestock exhibitors and support staff" was impossible during the outbreak.

"We considered every possible combination of what might work in this unprecedented time of COVID-19, and came to the conclusion that we could not host a traditional state fair based on the challenges inherent in large crowds," White said in the statement.

Although the outbreak scuttled plans for a traditional State Fair, which according to organizers draws hundreds of thousands of visitors annually to the fairgrounds in south Little Rock, some junior livestock showings were still taking place on the complex near West Roosevelt Road last week.

On Saturday afternoon, young folks participating in a junior livestock showing of wether dam goats led their animals around the sawdust-covered floor of a barn as family members and friends watched from behind a fence surrounding the show floor.

More goats bleated from small enclosures that ringed the center of the show barn.

As their owners held the animals firmly, a masked judge evaluated the goats, before offering comments on their stature using a microphone as the small crowd listened.

Many staff members and attendees appeared to be complying with the event's face-covering requirement, though some were not.

Tim Efird, 58, of Mount Ida, was at the event with his daughters, ages 14 and 13. He said his girls showed two goats in the wether dam class on Saturday and were planning to show again in the market-goat class today.

It was Efird's first time attending the State Fair for the goat competition, he said, though he has attended the event in the past for the calf section.

This year, a lot of animals were at the fair only for a one-day show, Efird said, making the 2020 edition of the fair different from in years past.

Though he said his daughters were hoping to win today, "Everybody wants to win," Efird said. He described the fair as more of an opportunity for the girls to develop a sense of responsibility while raising the livestock.

"My opinion, it helps them in the future with jobs and school and everything else because it kind of teaches them at a early age they've got a responsibility, they've got to do a schedule, they've got to step up and do it -- take care of things," he said.

For his part, Efird said he has had cattle since he was 10 or 12 years old.

A "Taste of the Fair" portion of the event featuring fair-food vendors will be held from 11 a.m. to 7 p.m. next weekend, albeit with a capacity restriction of 500 people and all food packaged in to-go containers.

Additionally, the pageant portion of the fair is scheduled to take place on Oct. 24, when winners of various divisions of the pageant competition, including Miss Arkansas State Fair Queen, will be crowned in a Facebook Live broadcast.