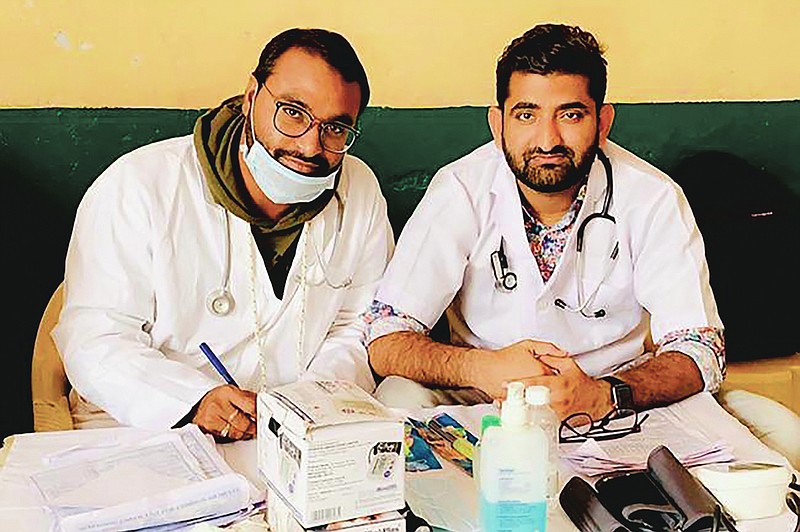 In this October 2019 photo provided by Bharat Sangwan, Joginder Chaudhary, left, and his friend and colleague Sangwan volunteer at a medical camp for women. After the virus killed the 27-year-old Chaudhary in late July 2020, his mother wept inconsolably. With her son gone, Premlata Chaudhary said, how could she go on living? Three weeks later, on Aug. 18, the virus took her life, too — yet another number in an unrelenting march toward a woeful milestone. (Courtesy of Bharat Sangwan via AP)

EDITOR’S NOTE: This is part of an ongoing series of stories remembering people who have died from the coronavirus around the world.

NEW DELHI -- To his family, Joginder Chaudhary was the star son.

The 27-year-old was a doctor, the first from their tiny village in central India. He was the eldest son, counted on to send money back to support his parents. He was a dreamer who wanted to open the first clinic to serve his village.

Chaudhary carried those hopes and dreams with him as he began working at a New Delhi hospital, aware of the risks of his profession as the coronavirus marched through India's cities and distant villages this summer.

"When the pandemic first started, we were very worried," said his father, Rajendra Chaudhary. "But he said to us that this is his duty, and he would have to deal with things like this all throughout his career."

By late July, Joginder Chaudhary was dead – one of the more than 100,000 deaths from the virus in India.

"He never had the ego of a doctor. He talked to everyone politely, and treated the nursing staff and patients with utter kindness," said Dr. Rameshwar Sangwan, Chaudhary's mentor at Dr. Baba Saheb Ambedkar Hospital, where he worked.

Racked with grief, his mother, Premlata, 50, cried constantly and wished that she too would die. Weeks after his death, she contracted the virus and died in August. Her husband said she never went out so he suspects that she may have caught it from him.

Now, the family is mourning her loss – and the absence of the son who was going to bring the family financial security and prestige.

"When he was in grade five, I told him I wanted him to study medicine and become a doctor," his father recalled. "Because I noticed he was very interested in reading and learning."

Since the school in his sparsely populated village in Madhya Pradesh state didn't teach in English, his father sent him to a private school in the neighboring state of Rajasthan, where the younger Chaudhary lived in a boy's hostel.

Like most of his friends, he wanted to study at a medical school in China after finishing high school. He appealed to his father.

Though Chaudhary received a partial scholarship, his father, a poor farmer with a half an acre of farmland, sold the family home and moved them into a rented house so he could pay the cost of his son's education.

At medical school, he quickly made friends because of his down-to-earth and amicable nature, said Aravind Kumar, his best friend and classmate. His friends lovingly nicknamed him "Jackie," a reference to Chinese actor Jackie Chan.

"Jackie was extremely smart," Kumar said. "Coursework that took us an hour to understand, he would understand in 15 minutes."

On returning to India in 2019, Chaudhary was on a mission. While pursuing post-graduate medical education, he found his first job as a junior resident at the government hospital in New Delhi. He wanted to specialize in orthopedics or anesthesia.

Chaudhary spent his first salary on a new motorbike for his father. The family's financial burden was finally lightening.

His parents were also planning their son's wedding. Following the Indian cultural preference for arranged marriages, the parents had set up virtual meetings between him and the prospective bride, another young doctor. The couple had agreed to marry in August.

But in late June, during routine tests, Chaudhary found that he was infected with the virus. After his condition began deteriorating, he was admitted into the covid-19 isolation ward at the hospital where he worked.

"I told him he would easily recover since he was a young and fit man," Sangwan said.

But his condition worsened over the ensuing few weeks as he was shuttled to a private hospital of his choice. After battling the disease for more than a month, Chaudhary died on July 26 from multiple organ failure, after an infection in his lungs caused pneumonia.

Doctors at Ambedkar Hospital, his friends and other donors pooled their money to start a fund to pay for his treatment. Later, Sir Ganga Ram Hospital, where he breathed his last, waived all his fees.

His mother didn't get a chance to see her son or participate in the Hindu cremation ceremony, which due to COVID-19, had few mourners. Mother and son last spoke a few days before his death on a video call. He had assured her he would recover and come home soon.

After his death, she was inconsolable and had a nervous breakdown, said Chaudhary's younger brother Kapil. She stopped talking or eating and would "constantly complain that she too wanted to die," he said.

The Delhi government gave the family USD $135,000 as part of compensation it gives to the families of frontline workers who die of covid-19. Officials also promised a job for Chaudhary's younger brother.

While the compensation will help the family, Chaudhary's father said the absence of his "star son" and wife weighs on him. "This pandemic has ruined my family," he said between sobs. "All our aspirations, our dreams, everything is finished." 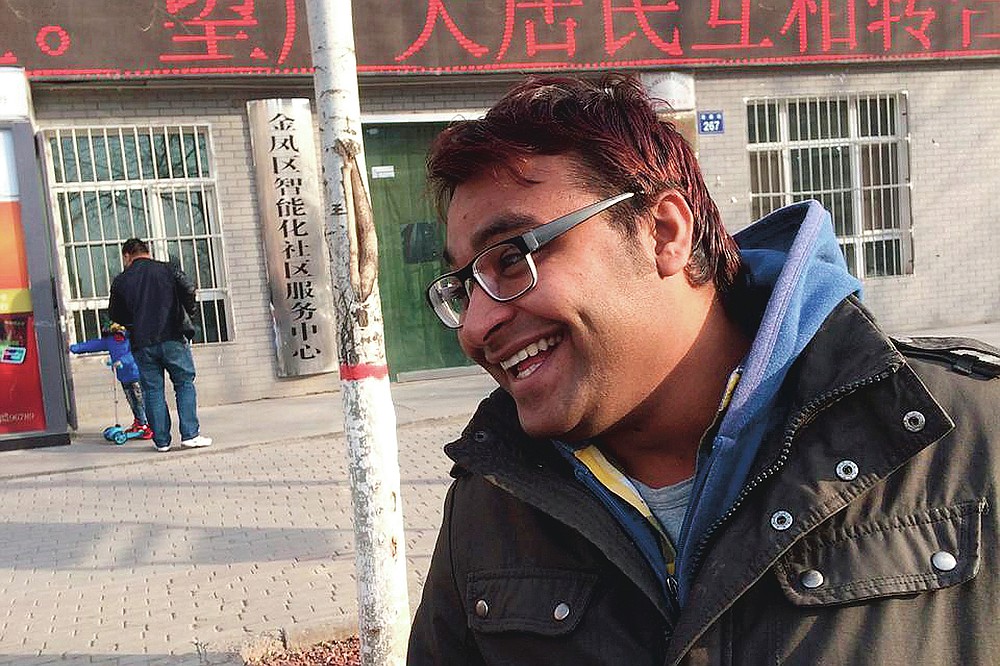 In this Dec. 23, 2014, photo Joginder Chaudhary smiles after completing a clinical class at Ningxia Medical University in Yinchuan, China. After the virus killed the 27-year-old Chaudhary in late July 2020, his mother wept inconsolably. With her son gone, Premlata Chaudhary said, how could she go on living? Three weeks later, on Aug. 18, the virus took her life, too — yet another number in an unrelenting march toward a woeful milestone. (Courtesy of Aravind Kumar via AP) 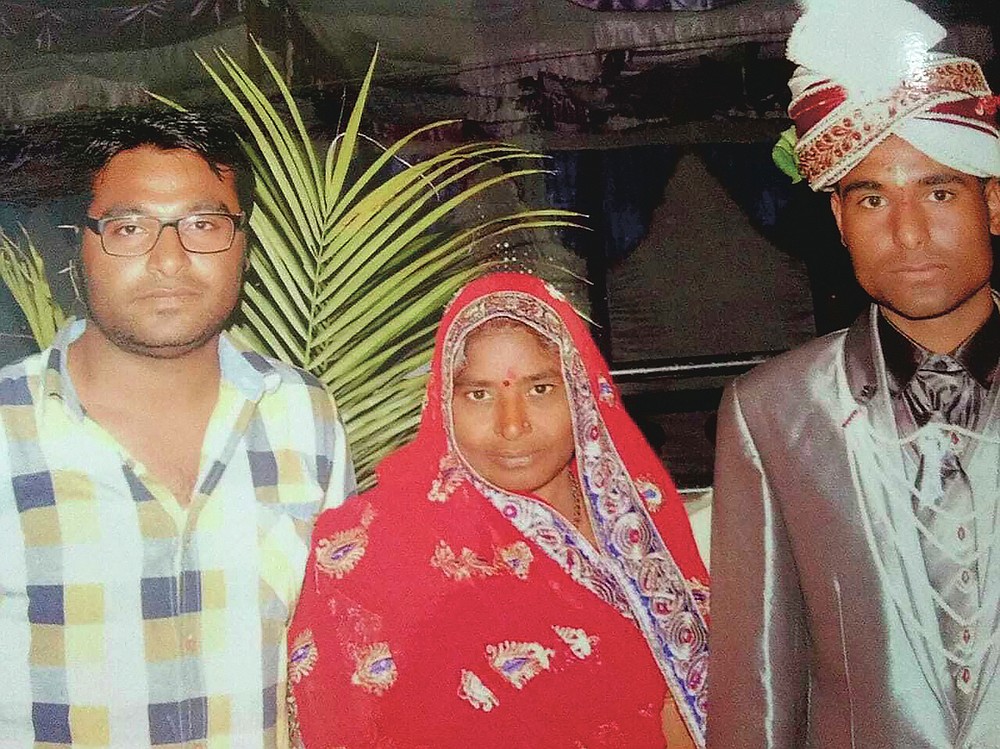 In this Feb. 3, 2014, photo, Joginder Chaudhary, left, and Kapil pose for a picture with their mother Premlata on Kapil's wedding day, in Jhantala, Madhya Pradesh, India. After the virus killed the 27-year-old Chaudhary in late July 2020, his mother wept inconsolably. With her son gone, Premlata Chaudhary said, how could she go on living? Three weeks later, on Aug. 18, the virus took her life, too — yet another number in an unrelenting march toward a woeful milestone. (Courtesy of Kapil Chaudhary via AP) 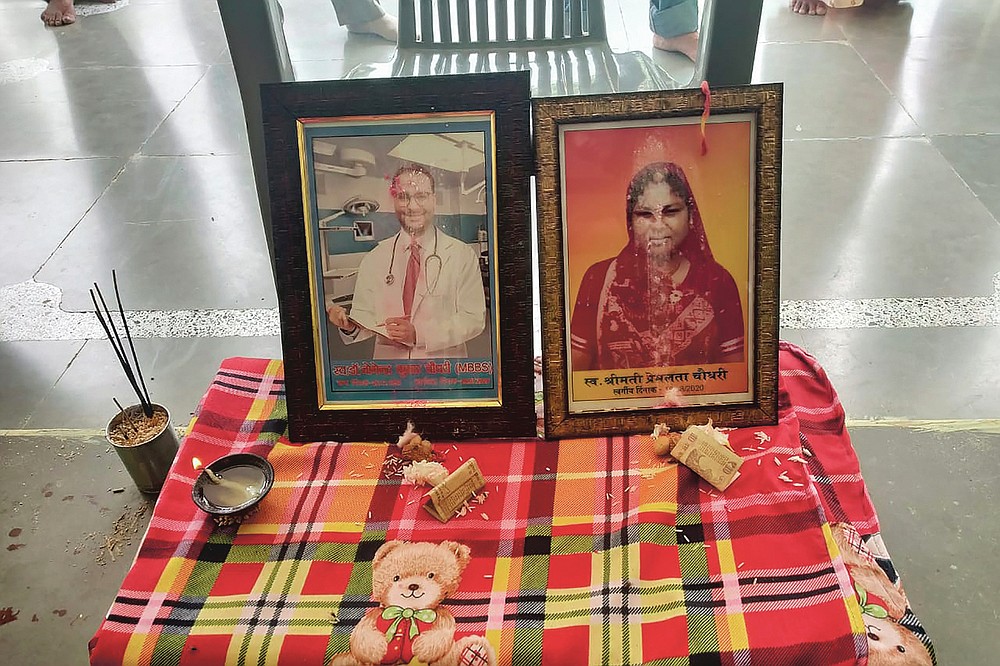 In this Sept. 17, 2020 photo provided by Kapil Chaudhary shows pictures of Joginder Chaudhary and his mother Premlata Chaudhary sitting on a table during a Hindu mourning ceremony held at the family home in Jhantala, Madhya Pradesh, India. fter the virus killed the 27-year-old Chaudhary in late July 2020, his mother wept inconsolably. With her son gone, Premlata Chaudhary said, how could she go on living? Three weeks later, on Aug. 18, the virus took her life, too — yet another number in an unrelenting march toward a woeful milestone. (Courtesy of Kapil Chaudhary via AP)
More News

EDITOR’S NOTE: This is part of an ongoing series of stories remembering people who have died from the coronavirus around the world.