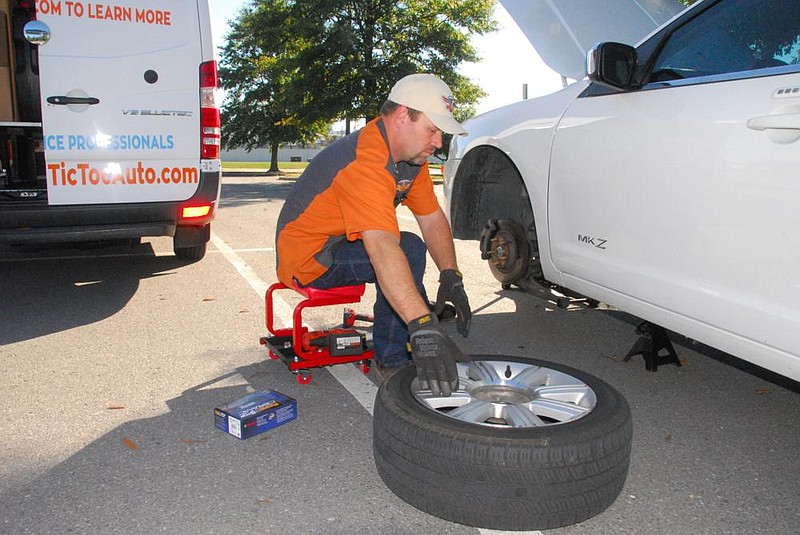 Nathan Moore, lead technician for Tic Toc Auto, gets ready to install a tire after completing brake job for customer in a parking lot next to a downtown North Little Rock apartment complex. (Arkansas Democrat-Gazette/Noel Oman)

Jamie Davidson wants to bring convenience to car maintenance, which means taking the mechanic to the customer.

The company will make in-home visits to change a vehicle's oil, swap out tires, replace old brakes or other basic vehicle maintenance chores.

Davidson said he believes the company also passes another simple test that many businesses fail: The experience.

"Nobody wants to go sit in a waiting room while they get their oil changed or while they get new tires or to drop their car off and have somebody pick them up and take them back," he said. "There's nothing about that that's appealing."

Tic Toc enters an auto repairs industry that already includes 162,000 establishments, both single location companies and companies with multiple locations, in the United States with a combined annual revenue of $115 billion, according to Dun & Bradstreet, the New York business analytics firm.

In a report, Dun & Bradstreet notes that the U.S.-based industry is "highly fragmented" with the 50 biggest companies accounting for less than 10% of the revenue.

They include Firestone, Jiffy Lube, Meineke, Midas, Monro Muffler Brake and Safelite Group, all of which have waiting rooms.

All that is to Tic Toc's benefit, according to Davidson.

"It's one of the last markets that hasn't been consolidated or monopolized," he said. "People have a lot of different choices. We're not trying to be the only choice. I just think for some people we're going to the best choice."

Indeed, while Dun & Bradstreet calls the industry landscape competitive, it has room for innovation.

"Large companies can maximize use of expensive diagnostic equipment and have advantages in purchasing, distribution, and marketing," according to the report. "Small companies can compete effectively by providing superior customer service or offering specialized services."

Davidson said he thinks his model will work for today's consumers just like Amazon.com's success as a retailer.

"For the most part, most stores have failed in the experience part because people no longer want to get in their cars and invest their time to go buy whatever," he said. "They [would] much rather push a button on their phone and have it delivered to them in a day or two days."

That's the same convenience Davidson wants to bring to the car repair business.

"What I'm really selling people is their time," he said.

He got the idea for Tic Toc from his travels on behalf of Strong Suit, which took him to Los Angeles frequently. The residents frequently looked for services that kept them from having to jump onto the city's traffic-clogged freeways.

"Basically everything in LA has become about convenience because traffic is a nightmare, people don't like getting out of their houses, all the typical reasons plus we've gotten very used to pushing a button," Davidson said.

Davidson acknowledges he doesn't get grease under his fingernails, but he instead relies on others to bring the maintenance expertise to the business. They include Gwatney Performance Innovation, the racing and performance parts division of the car dealership network, which also has provided financial backing.

Aaron Salisbury, Gwatney's fixed-operations director, said changing oil at dealerships is a loss leader and they would prefer customers use Tic Toc for basic maintenance and save the big items for the dealers' service department.

"It makes a lot of sense for us," he said. "And no matter how good the coffee is or how fresh the donuts are, it's still a waiting room."

Like all startups, Tic Toc remains a work in progress. The company has two trucks, two mechanics -- lead technician Nathan Moore and Nick Honea -- dispatcher Raliegh Sanders and Keith Hoelzeman, who is in charge of marketing and technology.

For now, Tic Toc's reach is limited to central Arkansas. But the company is hiring.

It's also testing a subscription service where in exchange for a monthly fee, customers can get four oil changes a year, two tire rotations a year, fluids topped off and "a couple of more additives we're working on," Davidson said.

The company also offers the same services for company fleets with 20 clients.

"Our fleet division is essentially a way for you to not have to pay your employees to get the vehicles serviced and you're not taking out your vehicles when they should be on the road making you money," he said. "We do our fleet services after hours and on weekends."

Tic Toc is for anyone who doesn't have a lot of free time and doesn't want to spend what little free time they have on a routine but necessary task like vehicle maintenance, he said.

Davidson has aspirations for scaling up the company.

"If this works in Little Rock, it will work anywhere," he said.

And while Tic Toc's concept makes sense, it's not enough to be successful, Davidson said.

"The hardest thing about starting a business like this isn't that it doesn't make sense to people," he said. "It's just changing people's behavior. It's getting people to do something differently than they have been doing it.

"But what I will tell you is that once people try our service, they don't go back once they figure out, whoa, I can get this done while I'm mowing my grass at home or while I'm sitting in my office at work or whatever. They're not going back."