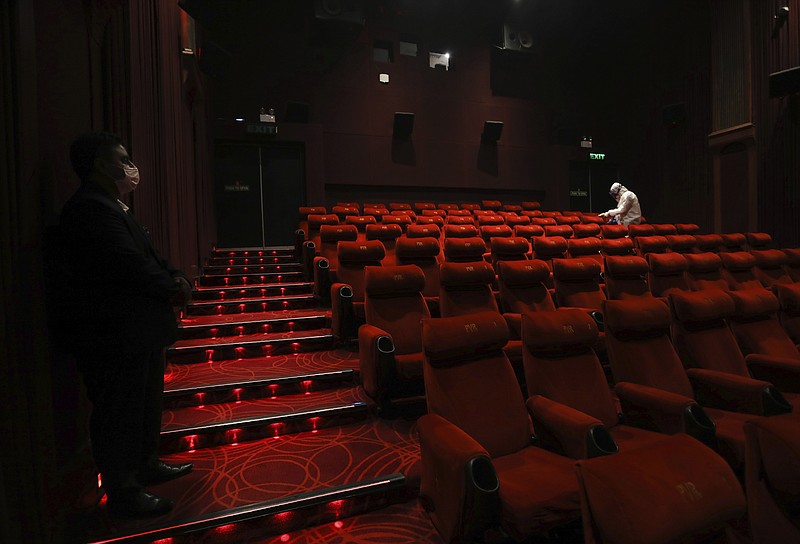 FILE - In this Friday, July 31, 2020, file photo, a worker of PVR cinemas, a multiplex cinema chain, sanitizes a theater during a press preview to show their preparedness to handle the COVID-19 pandemic in New Delhi, India. After seven months of total blackout, cinemas reopened Thursday, Oct. 15, in several parts of India with few older titles on the marquee and shows limited to half the capacity. The reopening of movie theaters comes at a time when India’s confirmed coronavirus tally surpassed 7.3 million. (AP Photo/Manish Swarup, File)

NEW DELHI -- Seven months after screens went dark, cinemas reopened last week in much of India with mostly old titles on the marquee -- a sign of the country's efforts to return to normal as the pace of coronavirus infections slows but also of the roadblocks that remain.

The return to movie theaters comes as India is registering the highest number of daily cases globally and is expected to soon top the list worldwide in terms of total number of reported infections, passing the United States. But trends also suggest the spread is beginning to slow.

Nearly 10,000 theaters closed in mid-March when the government imposed restrictions to fight the virus, which has torn through India, killing more than 110,000 people. Cinemas are among the last public places to reopen -- a hugely symbolic move in a country known the world over for the lavish productions pumped out by its Bollywood film industry.

Every year, the $2.8 billion juggernaut produces more than 2,000 films that feature complex dance routines, singing and spectacularly large casts, serving to unite a diverse nation of 1.4 billion people. The industry's success over the years has embedded moviegoing into India's contemporary culture and been a boon for the economy, which, since the pandemic began, has nosedived to its slowest growth on record.

But even if theaters are reopening, filmmaking still hasn't rebounded. Reeling from zero box-office returns in this pandemic year, Indian filmmakers have not lined up any new big-ticket releases and have pushed any films they have made directly to online streaming platforms like Netflix and Amazon Prime.

Such struggles can be seen the world over as the pandemic has devastated the entertainment industry. Earlier this month, a major American movie theater chain said it would temporarily shutter hundreds of locations in the U.S. and the U.K.

Movie theaters pose some of the biggest infection risks since they put people in a closed space, where the virus can spread easily, for an extended period of time.

To minimize the danger, Indian cinemas have separated seats, staggered show times and are encouraging digital payments. Masks and temperature checks are mandatory.

"We have put everything into place, maybe more than what has been prescribed," said Gagan Kapur, regional head of the PVR Cinemas in New Delhi.

Still, some Indian states have been cautious.

Authorities in Mumbai, the home of Bollywood, put off reopening cinemas. The southern state of Maharashtra, of which Mumbai is the capital, is the worst-hit in India, with more nearly 37% of the country's covid-19 fatalities.

Older films like "Tanhaji," a historical epic about a Hindu warrior who rises against the Mughals, "Thappad," a social drama on domestic violence, and "Shubh Mangal Zyada Saavdhan," a rom-com featuring a gay couple, were played across multiple screens. "PM Narendra Modi," an unabashed hagiography of the Indian prime minister that was released last year, also ran in some places.

The reopening of cinemas comes as trends suggest a decline in new infections.

India saw a surge in July and added more than 2 million in August and another 3 million in September. But it is seeing a slower pace of coronavirus spread since mid-September, when the daily infections touched a record of 97,894. It is recording an average of just over 70,000 cases daily this month.

But some experts say India's tally of more than 7.3 million total infections may not be reliable because of poor reporting and inadequate health infrastructure. India is also relying heavily on antigen tests, which are faster but less accurate than RT-PCR tests.

Health officials have also warned about the potential for the virus to spread during the religious festival season beginning later this month.

"The next 2½ months are going to be very crucial for us in our fight against corona because of the winter season and the festival season," Health Minister Harsh Vardhan said Wednesday. "It becomes responsibility of every citizen to not let our guard down and follow covid-19 appropriate behavior to curb spread of the infection."

Information for this article was contributed by Shonal Ganguly of The Associated Press. 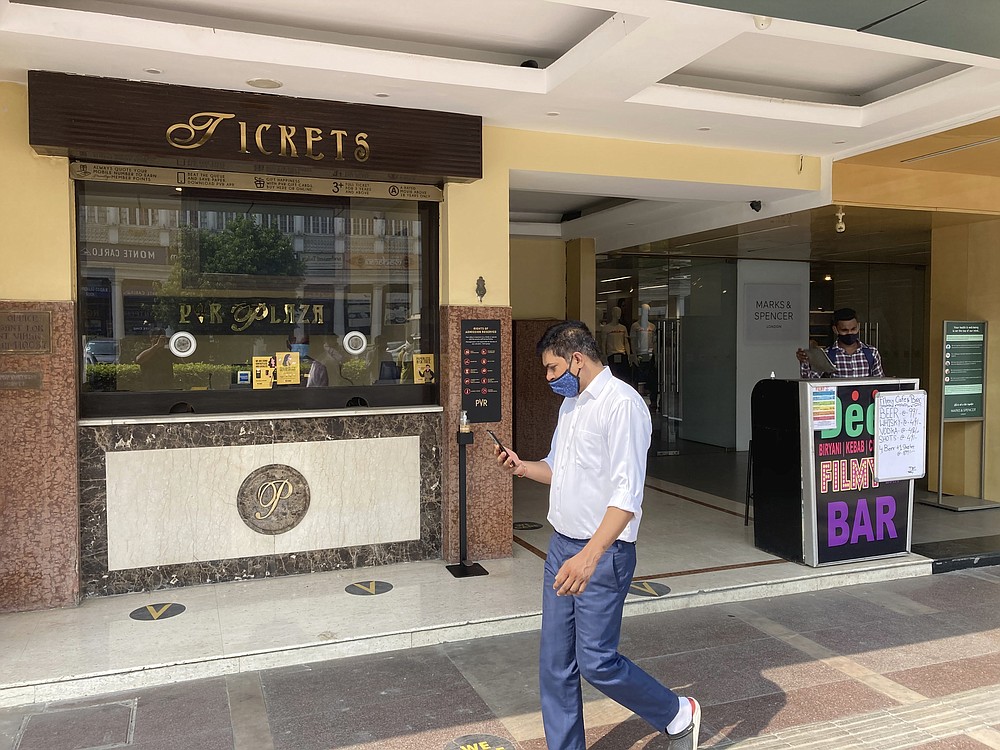 A man wearing a face mask walks past the ticket counter of a movie hall in New Delhi, India, Thursday, oct. 15, 2020. After seven months of total blackout, cinemas reopened Thursday in several parts of India with few older titles on the marquee and shows limited to half the capacity. The reopening of movie theaters comes at a time when India’s confirmed coronavirus tally surpassed 7.3 million. (AP Photo/Shonal Ganguly)
ADVERTISEMENT