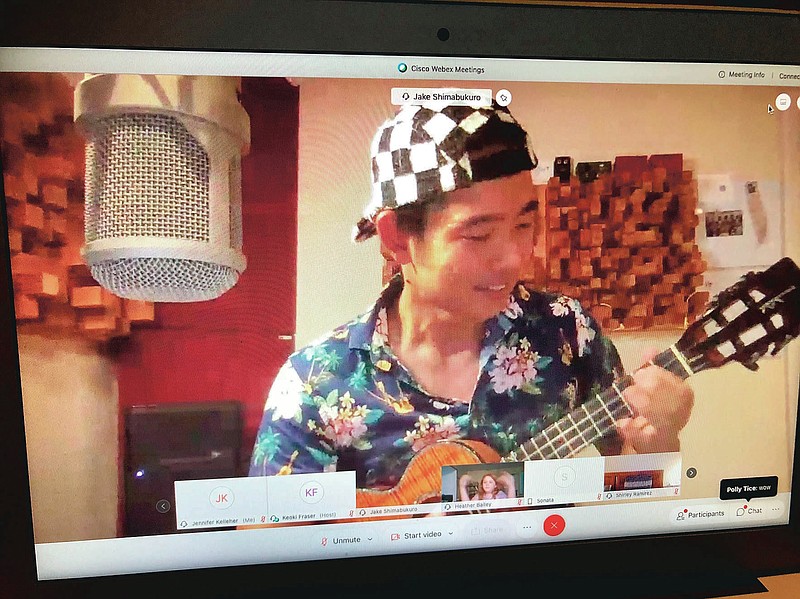 This Friday, Sept. 25, 2020, photo of a computer screen in Honolulu shows internationally renowned ukulele virtuoso performing at a virtual concert organized by the principal of a small Hawaii school. Aikahi Elementary Principal Keoki Fraser is using local star power to help his school community feel connected and uplifted during the uncertainties of the pandemic. (AP Photo/Jennifer Sinco Kelleher)

HONOLULU -- Some of Hawaii's most popular musical artists have appeared before an unlikely audience -- a small elementary school on Oahu's windward coast.

These are gigs with a purpose: The principal dreamed up the virtual concerts, presenting headliners like internationally renowned ukulele virtuoso Jake Shimabukuro, as a way of bringing together a community struggling with the pandemic.

"We have probably the best ukulele player -- one of the best ukulele musicians in the entire world -- that's gonna come and play for you guys tonight," said Aikahi Elementary School principal Keoki Fraser as children and parents tuned in from home computers. "And, he's from Hawaii."

Fraser is trying to organize concerts every several weeks as his school, like most Hawaii public schools, continues to educate its students remotely.

There have been five concerts so far and they've featured locally well-known artists like singer Kimié Miner and reggae artist Kolohe Kai.

Tabitha Persaud, mom of three Aikahi students, remembers Fraser coming to the parent-teacher association with the idea of approaching big names. "Can we do that?" she wondered. "Will they do that for us?"

She was surprised by the caliber of the acts, but "they're in the same situation as we are. So, I mean, they're not having to go anywhere and leave their home or anything. So it's really simple for them."

"We just hit them up," said Fraser, who graduated from the local high school. "We love to get people that are influential that the kids look up to."

During a recent Friday concert, Fraser invited former student Dylan Kunz, now a seventh grader, to play ukulele as one of the student performers to open for Shimabukuro.

Kunz, who idolizes Shimabukuro, was stoked. "He's the reason I started playing," he said. "It keeps me motivated to keep playing."

Shimabukuro himself attended Hawaii public schools. Before performing, he explained that he started playing when he was 4 years old; his mother was his first teacher.

As he played an upbeat flamenco piece, followed by the Beatles tune "In My Life," the online conferencing platform's participant boxes showed children swaying to the music. A mom twirled her daughter around.

The chat panel lit up with messages like "mind blown," and "that was amazing."

The concerts are open to all. For one performance, about 1,200 viewers tuned in, Fraser said.

"I think it's so much fun to see the smiling, happy faces of all the kids, and covid has taken so much away from the kids," said Amy Kunz, Dylan's mom. "I think principal Fraser, in doing this, is really hitting home on that social-emotional aspect, that even though we're not in school, we can still make these connections and have fun." 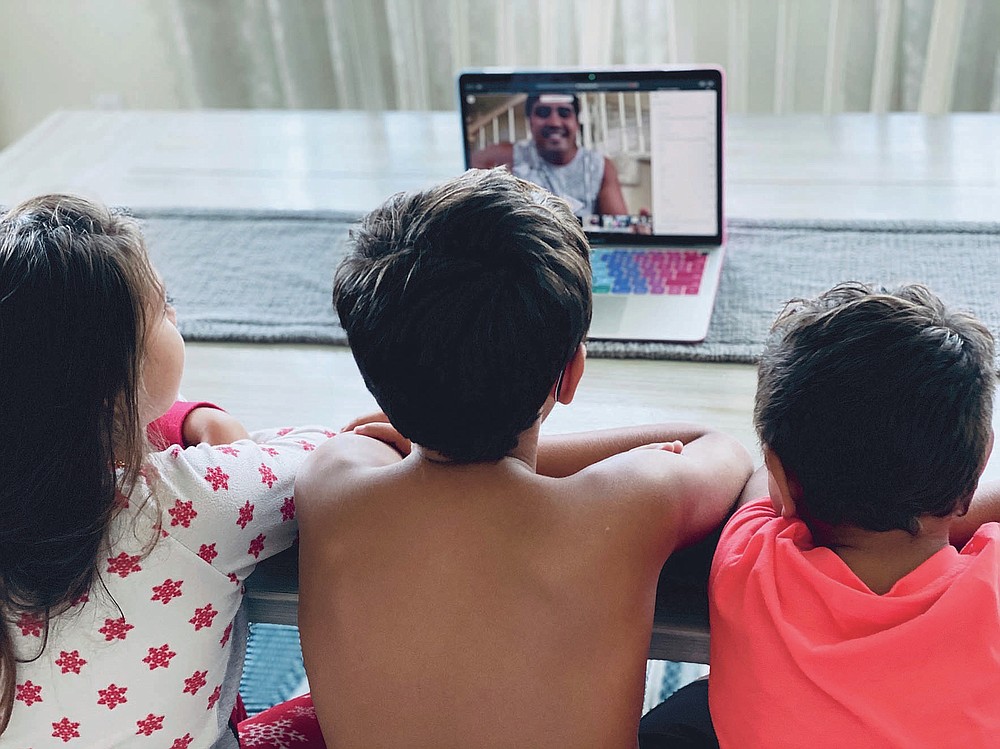 -This photo provided by Tabitha Persaud shows Isalyne Persaud, left, Ivan Persuad, middle, and Immit Persuad, right, watch a concert featuring reggae artist Kolohe Kai from their home in Kailua, Hawaii on Aug. 21, 2020. Internationally renowned ukulele virtuoso Jake Shimabukuro and singer Kimie Miner, one of the most popular artists in Hawaii right now, were among the other headliners of recent online concerts for a Hawaii elementary school. Aikahi Elementary Principal Keoki Fraser is using local star power to help his school community feel connected and uplifted during the uncertainties of the pandemic.(Tabitha Persaud via AP)
ADVERTISEMENT