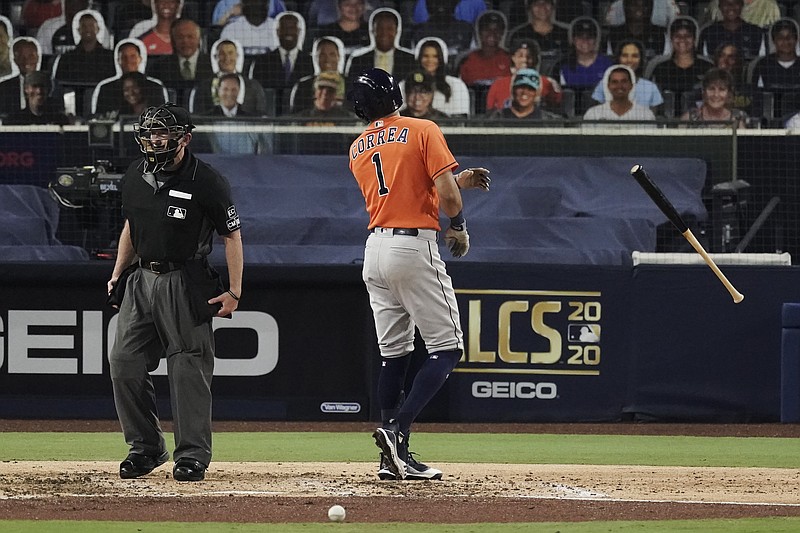 SAN DIEGO -- The Houston Astros spent this odyssey of a season as baseball's biggest villains.

When Aledmys Diaz flied out with a runner on first to end Game 7 of the AL Championship Series, the bad guys finally lost.

Ridiculed, roasted and ripped all year long after the revelation of the franchise's sign-stealing tactics in previous seasons, the Astros still summoned enough October heart and poise to reach the brink of another World Series. Manager Dusty Baker's club even came agonizingly close to matching the biggest playoff comeback in baseball history in a wild ALCS.

"The legacy of this group is that these guys are ballplayers, and these guys are men," said Baker, who took over the team in January. "They've been through a whole bunch other than on the ballfield, and these guys can forget whatever problems that they've had that's out there and come together as a group. These guys will be forever friends."

Houston fell behind early and never caught up in a 4-2 loss to Tampa Bay in Game 7 on Saturday night, coming up short of an astonishing series comeback after three consecutive victories.

Although they couldn't quite conjure one more incredible postseason feat, this playoff run should be a source of pride for these Astros long after the boos stop.

If fans are allowed back in most stadiums in 2021, this tarnished franchise probably won't hear the end of 2020 anytime soon -- but the Astros who return next season plan to greet the condemnation with the same mental toughness they demonstrated this month.

"I think we showed the kind of team we are," said Lance McCullers Jr., who pitched four-hit ball into the fourth inning as the Game 7 starter.

"We weren't on a revenge tour," McCullers added. "That's not what this was. This was just a bunch of guys coming together and wanting to play good baseball and wanting to go to another World Series. That's what this was. We fell short of our goal, but a lot of growth and a lot of impressive people stepped up."

After winning two of the previous three AL pennants and the 2017 World Series championship, the Astros played the entire season under a large, dark cloud after the revelations of the scope of the team's scheme to steal opponents' signs with a center-field camera and relay them to Houston's batters, partly by banging a trash can.

Despite that ominous beginning to an already weird season, Houston's veteran core never stopped fighting -- and in October, the Astros demonstrated the proudest reasons for their impressive postseason success.

"I've never had so much fun playing baseball as I did with this group of guys," shortstop Carlos Correa said. "Everything -- the pandemic hit, spring training 2.0, everything, we didn't fold. We kept battling."

The Astros' wild year began in January with the firings of Manager AJ Hinch and General Manager Jeff Luhnow. But several Astros veterans from those tainted seasons remain on the team, and the players weren't sanctioned.

They reported to spring training in February only to face widespread condemnation from their fellow major leaguers as the team that every other team loved to hate.

The Astros were relentlessly ripped by their opponents and castigated online from spring training onward. They were soundly booed and serenaded by the banging of trash cans whenever opponents' fans were allowed to be around them during this coronavirus-shortened season.

A fan even got a megaphone and broadcast his condemnation of the 2017 Astros into Petco Park from an apartment balcony beyond the outfield fence in Game 4 in this ALCS, calling them out individually by name as cheaters.

Some Astros ignored the hate, while others like Correa reveled in it. The beloved Baker provided a level of respectability, but the Astros were set to face a long regular season as the most reviled team in the majors -- until the coronavirus pandemic upended everything.

When baseball finally got back underway in July, the Astros played in largely empty stadiums where opposing fans couldn't boo or heckle them -- although they tried. Fans gathered outside Dodger Stadium to express their displeasure when the team buses brought the Astros to Chavez Ravine for a regular-season series against the Dodgers, who lost the 2017 World Series to Houston in seven games.

After an offseason of turnover and injury losses, the defending AL champions struggled through a mediocre regular season and made the playoffs only due to the expanded field. At 29-31, they had their worst season by winning percentage since 2014.

That's when they swiftly returned to the superb big-game form they've had so consistently over the past four years -- whether or not they knew what pitches were coming.

"I'm extremely proud of this team for fighting every single day, battling every single pitch and going out there and playing hard for one another," third baseman Alex Bregman said.

The Astros lost the first three games of the ALCS by a combined 11-5 to the deep, talented Rays. Rather than giving up, Houston became the second team in baseball history to win three in a row after being down 0-3 in a playoff series.

Houston's follow-up to its 2019 pennant is even more impressive after a wholesale upheaval of its pitching staff -- a huge factor that was barely noticed when the collection of second-choice starters and rookie relievers pitched superbly in the ALCS.

The Astros lost Gerrit Cole, who signed with the Yankees, and Justin Verlander, who needed Tommy John surgery. They also went into October without most of their preseason bullpen due to injuries.

Houston's lineup of veteran hitters simply kept slugging, and the Astros fought to the brink of the World Series.

"This team is a bunch of fighters with a tremendous amount of perseverance and fortitude," Baker said. "One thing is for sure: We'll be back in this position next year." 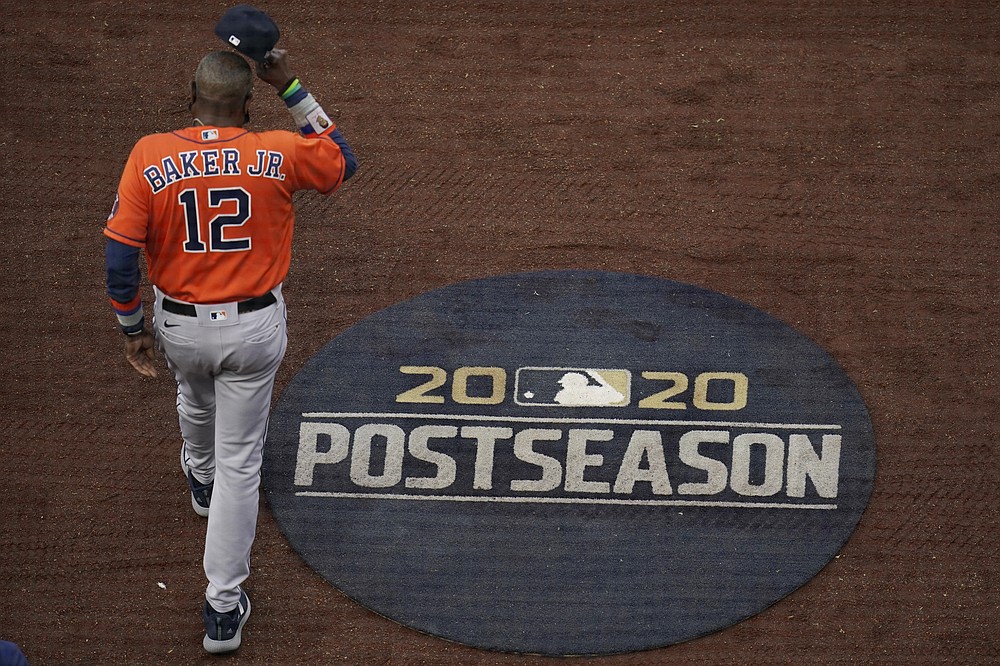 Houston Astros manager Dusty Baker Jr. walks out to the infield for the national anthem before Game 7 of a baseball American League Championship Series between the Houston Astros and the Tampa Bay Rays, Saturday, Oct. 17, 2020, in San Diego. (AP Photo/Gregory Bull) 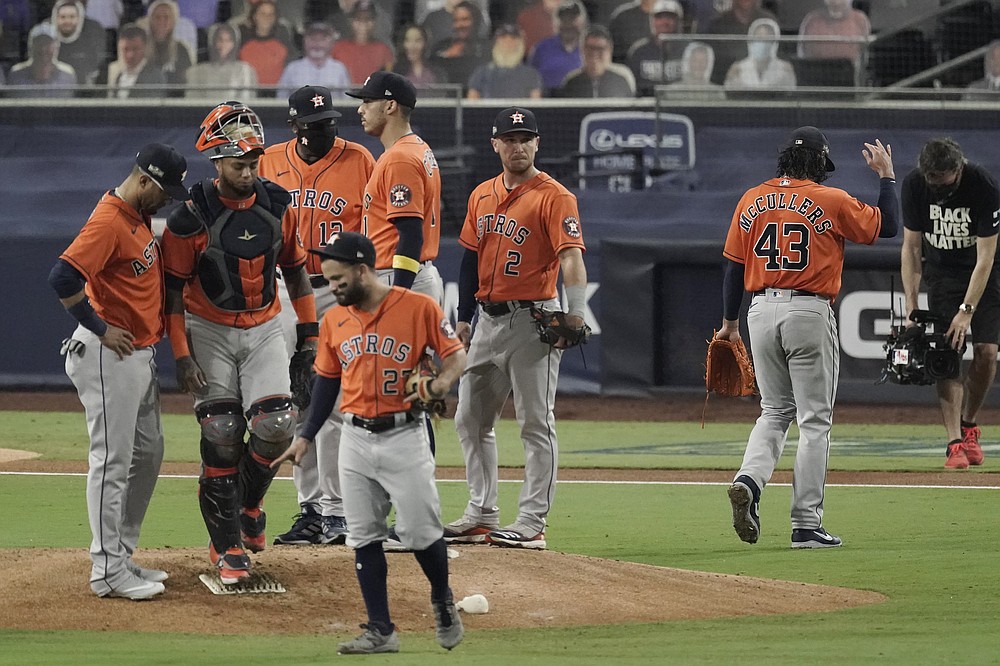 Houston Astros pitcher Lance McCullers Jr. (43) walks off the field after being relieved during the fourth inning in Game 7 of a baseball American League Championship Series against the Tampa Bay Rays, Saturday, Oct. 17, 2020, in San Diego. (AP Photo/Jae C. Hong) 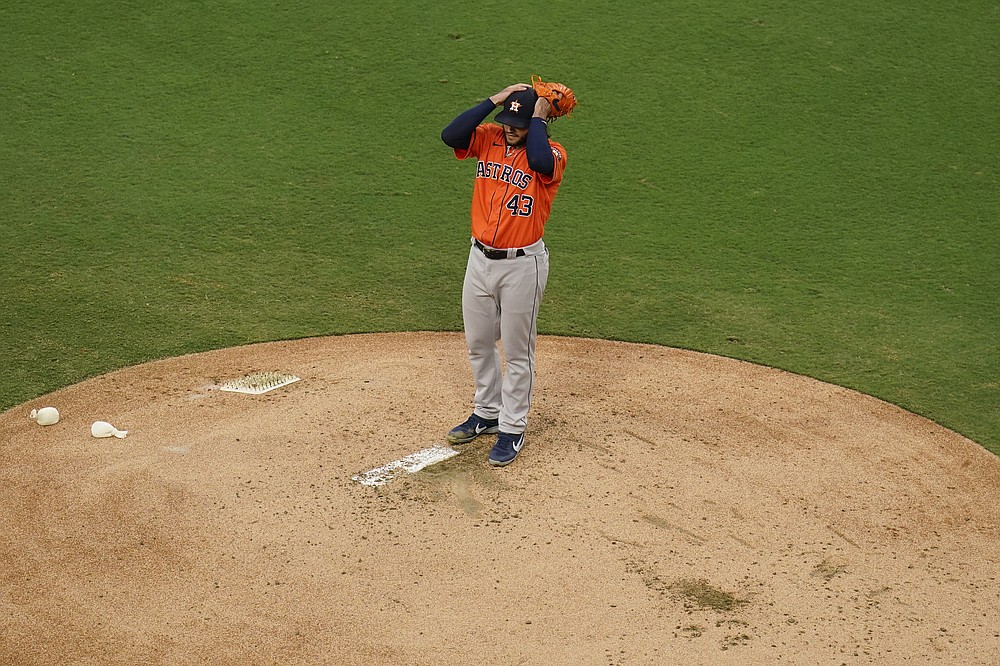 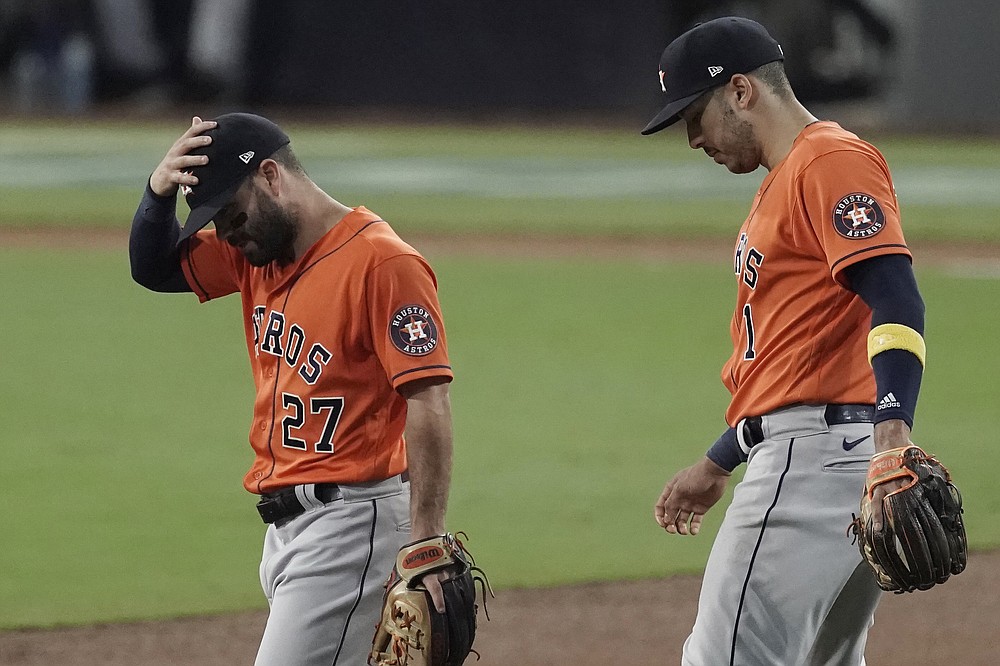