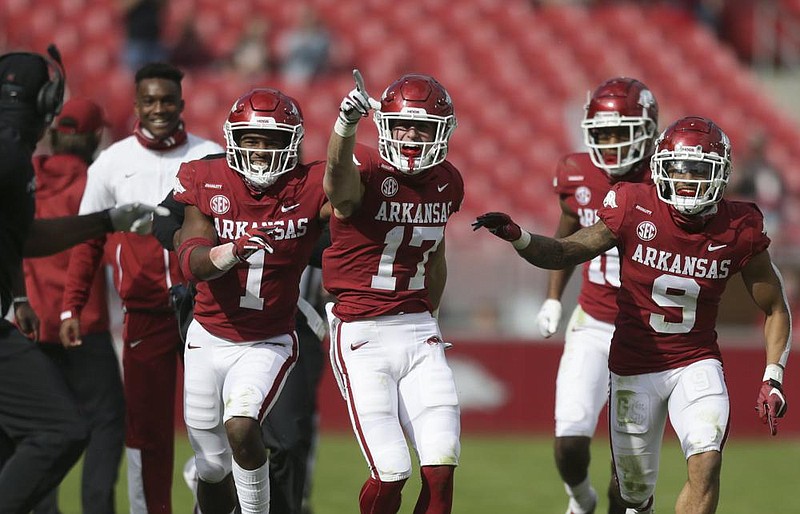 Arkansas defensive back Hudson Clark (17) celebrates with Jalen Catalon (1) and Greg Brooks Jr. (9) in the third quarter after the second of his three interceptions Saturday against Ole Miss in Fayetteville. All three contributed to the Hogs’ six interceptions during a 33-21 victory. More photos at arkansasonline.com/1018razorbacks. (NWA Democrat-Gazette/Charlie Kaijo)

FAYETTEVILLE -- The University of Arkansas confounded the hurry-up Spread attack of the Ole Miss Rebels with six interceptions in Saturday's 33-21 upset at Reynolds Razorback Stadium to move into the NCAA lead with 10 interceptions through four games.

The Razorbacks lead the FBS by one interception over Kentucky, which has posted nine in the same number of games. Syracuse and Pittsburgh have eight interceptions each, in five and six games, respectively.

Look for SEC and possibly even national awards this week for Arkansas defenders, led by pick-sixes from Jalen Catalon and Grant Morgan and three interceptions from walk-on freshman cornerback Hudson Clark.

The Razorbacks played nearly game-long zone defense and read the eyes of quarterback Matt Corral to give him and Coach Lane Kiffin fits.

"The game plan, they tried to keep it as simple as possible," Clark said. "We were in zone most of the time, then we'd run a little blitz. too, and put an extra guy in the box.

"We just saw how fast they would go and how fast they got set up. I felt like it was easier for us to be able to sit back in the zone and read the quarterback. Because we worked on that all throughout practice."

Arkansas jumped up to No. 7 nationally in turnover margin with a plus-5 margin against Ole Miss. The Razorbacks cashed their seven takeaways into 24 points, while the Rebels did not score on either of their two takeaways, a fumble recovery at the Arkansas 17 and an interception at the Ole Miss 39.

The Razorbacks have 13 takeaways and 7 turnovers through four games for an average turnover margin of plus-1.5 per game.

Treylon Burks' amazing catch and toe-drag touchdown in the fourth quarter pulled down the No. 1 ranking on ESPN SportsCenter's top plays Saturday night.

Burks made the catch in the back left corner of the end zone, jumping high to get his right hand on a 7-yard pass from Feleipe Franks before bringing it into his midsection and touching his right foot in the end zone before falling out of bounds.

Burks was awake just after 1 a.m. to tweet about the No. 1 ranking: "It's always been a dream to make sports center top 10."

The folks in the UA athletic department's marketing and graphics departments had their troll game working at 100 against the Rebels.

The @ArkRazorbacks Twitter account posted a short video showing Thomas the Tank Engine, the kids' show icon, wearing an Ole Miss face covering and crashing into a puddle of water on a falling bridge. The video was a play on the Rebels' "Lane Train" theme with Coach Lane Kiffin, with a sign announcing "All Aboard" on its side. Then the video cut to a depiction of Sam Pittman as the "conductor," with defensive coordinator Barry Odom and offensive coordinator Kendal Briles as his sidekicks.

Kiffin, never one to back down from Twitter fun, responded to the video on Sunday, writing, "Creative [with a thumb's up icon]. Congrats. Very well coached Team. See ya next year."

Also, inside Reynolds Razorback Stadium, the sound system played "Baby Shark" loudly as the Razorbacks celebrated the win, a play on the Rebels' "Land Shark" theme.

The Razorbacks have three of the top four tacklers in the FBS ranks in terms of tackles per game, including linebacker Grant Morgan at No. 1 with 52 tackles on the season for an average of 13.0 per game.

Razorback linebacker Bumper Pool and Missouri's Nick Bolton are tied for second with an average of 12 tackles per game in three outings for 36 each.

Arkansas redshirt freshman safety Jalen Catalon has 45 tackles through four games, an average of 11.25 per game that has him tied for fourth with Auburn linebacker Zakoby McClain.

Catalon is the only defensive back among the top 27 players in tackles per game.

Grant Morgan, playing with an injured left elbow, nearly had a critical interception midway through the fourth quarter. Given another shot minutes later, Morgan did not drop the opportunity. The senior picked off Matt Corral over the middle then showed smooth moves to get the interception into the end zone.

After making the interception on the 23, Morgan easily side-stepped a dive from Corral around the 15-yard line. Nickel back Greg Brooks Jr. gave Morgan a good block on tight end Kenny Yeboah, who then got back into the play. Morgan gave Yeboah a jab step right and put him on his rear with a cut to the left, which cleared his way into the end zone ahead of a futile dive from offensive lineman Nick Broeker for the game-clinching touchdown with 3:07 remaining.

"I told the team that Morgan, if I'm a running back I might be a little bit worried about it," Pittman said. "He took that back to the house."

Ole Miss Coach Lane Kiffin had words of advice for quarterback Matt Corral, who entered the game as the NCAA's total yardage leader with 407 yards per game, but wound up passing for 200 yards and throwing 6 interceptions to go along with 2 touchdowns.

"We've already talked and just said, 'This game can be really humbling, and you've got to be very careful of reading all your stuff during the week and how great you are and all this,'" Kiffin said of his conversation with Corral. "It'll bring you right back down. Once you start playing really well, people ... study you. And today they read his eyes and played all zone, and he's staring guys down and that's where the interceptions came."

Kiffin said of Grant Morgan's 23-yard interception return for a touchdown, "Three guys could have picked it."

Stoned at the goal

The Razorbacks stopped two Ole Miss drives that reached their 1-yard line, one on the Rebels' first offensive sequence and another in the third quarter as Coach Lane Kiffin elected not to try field goals.

Ole Miss drove 59 yards after forcing a three and out on the game's first series. On second and goal from the Arkansas 2, Greg Brooks Jr. held Jerrion Ealy to a 1-yard gain. On third down, Jonathan Marshall and Grant Morgan combined to held Ealy up for no gain. On fourth down, Matt Corral mis-handled the ball in the backfield and Jalen Catalon swooped in to recover the fumble at the Arkansas 4.

The Rebels got their running game in gear with their first possession of the second half, with Ealy piling up 20 yards and Snoop Connor adding 18 more during a 74-yard march to within inches of the goal line.

On fourth down from the 1, Brooks and safety Myles Mason combined to slam into Connor at right guard and keep the Rebels out of the end zone.

"Two goal-to-go situations and we don't get any points out of that," Ole Miss Coach Lane Kiffin said. "There's so many opportunities that you think about ... the game became a one-score game in the fourth quarter, had we not screwed all that up early, you know, we're up by three or four scores."

Ole Miss tight ends Kenny Yeboah and Dontario Drummond, who turned in two-touchdown games against Alabama and Florida, respectively, were mostly silent against the Razorbacks.

Drummond caught one pass for 14 yards, while Yeboah went without a catch. Drummond was targeted three times, and at least one of his targets wound up in an interception, as cornerback Hudson Clark jumped over him to pick off a pass at the Arkansas 29 late in the third quarter.