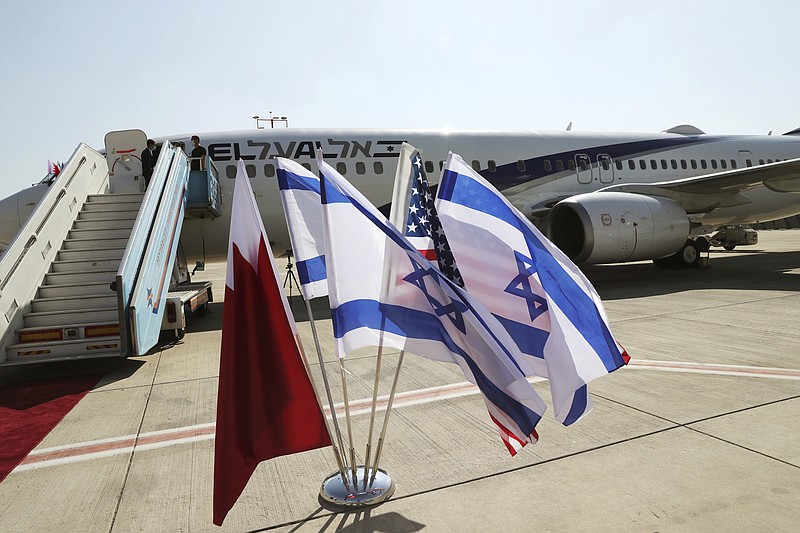 The national flags of Bahrain, Israel and America, flutter in near the Israeli flag carrier El Al plane that will fly an Israeli delegation, accompanied by U.S. aides, to Bahrain to formalise relations and broaden Gulf cooperation, at Ben Gurion airport in Lod, near Tel Aviv, Israel Sunday, Oct. 18, 2020. (Ronen Zvulun/Pool Photo via AP)

The U.S.-brokered agreement capped a one-day visit by a high-level delegation of American and Israeli officials to Bahrain.

Bahrain joined the United Arab Emirates at a festive White House ceremony last month marking the "Abraham Accords," a pair of U.S.-brokered diplomatic pacts with Israel. While the UAE's deal with Israel formally established ties, the agreement with Bahrain was less detailed and included a mutual pledge to follow suit.

Sunday's visit appeared to complete that task, clearing the way for the countries to open embassies and exchange ambassadors in the coming months.

"It was indeed an historic visit, to start opening relations between both countries, to have fruitful bilateral relations in both fields," said Bahrain's foreign minister, Abdullatif al-Zayani, at the signing ceremony.

"Today we made the first formal step in bringing closer ties between the countries," Ben-Shabbat said. "We were accepted with open arms, with warmth and cordiality."

"This is an important step in stability in the region, in bring prosperity to all the people in the region and in the countries," added Mnuchin.

[Video not showing up above? Click here to view » https://www.youtube.com/watch?v=WHsr1fzs2Xk]

Israel's agreements with the UAE and Bahrain have marked diplomatic victories for the Trump administration and for Netanyahu.

But they have come under heavy criticism from the Palestinians, who have long counted on a unified Arab stance that recognition of Israel should come only after the Palestinians achieve an independent state of their own. The agreements reflect a shifting Middle East, in which shared concerns about Iran and business opportunities have overshadowed the Palestinian issue.

The Palestinians have severed ties with the White House, accusing it of being unfairly biased toward Israel. U.S. officials have in turn cultivated ties between Israel and Arab states, hoping to increase pressure on the Palestinians to reduce past demands in peace talks.

Bahraini civil society groups and opposition figures, already targeted in a yearslong crackdown on dissent, have also spoken out against normalization with Israel.

Israel's commercial El Al Flight 973 -- a nod to the international dialing code for Bahrain -- flew through Saudi Arabia's airspace en route to Manama. Although Saudi Arabia has not normalized ties with Israel, it has signaled tacit support for the moves by its Gulf neighbors, which reflect shared concerns about Iran.

In a rare recording, the Islamic State condemned the move toward normalization with Israel, identifying the UAE and Bahrain and also accusing Saudi Arabia of showing "subservience to crusaders" and Jews.

"Here now, the Jews have come to you and are walking freely in your streets and countries, feeling safe and secure with approval from your tyrants and supported by your edicts," said the group's spokesman, Abu Hamza al-Qurayshi. He also called for attacks to undermine the Saudi economy.

It was the first recording by al-Qurayshi in about a year.

Information for this article was contributed by Sarah El Deeb of The Associated Press. 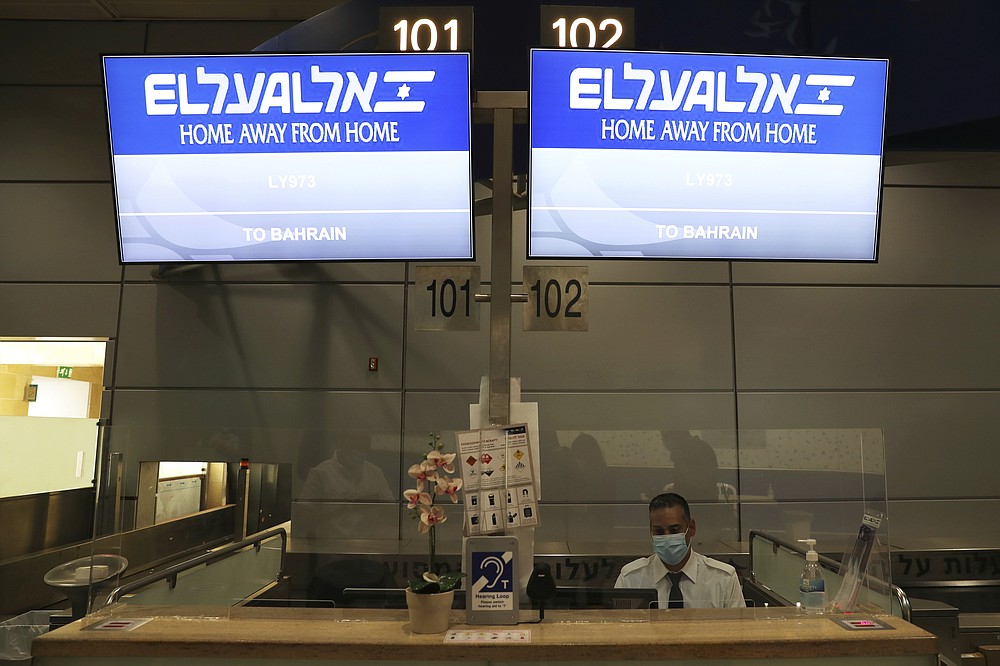 Signs at the counter of Israeli flag carrier El Al shows flight details to Bahrain as Israel is due to send delegates to Bahrain to formalize relations and broaden Gulf cooperation, at Ben Gurion airport in Lod, near Tel Aviv, Israel Sunday, Oct. 18, 2020. (Ronen Zvulun/Pool Photo via AP)
ADVERTISEMENT