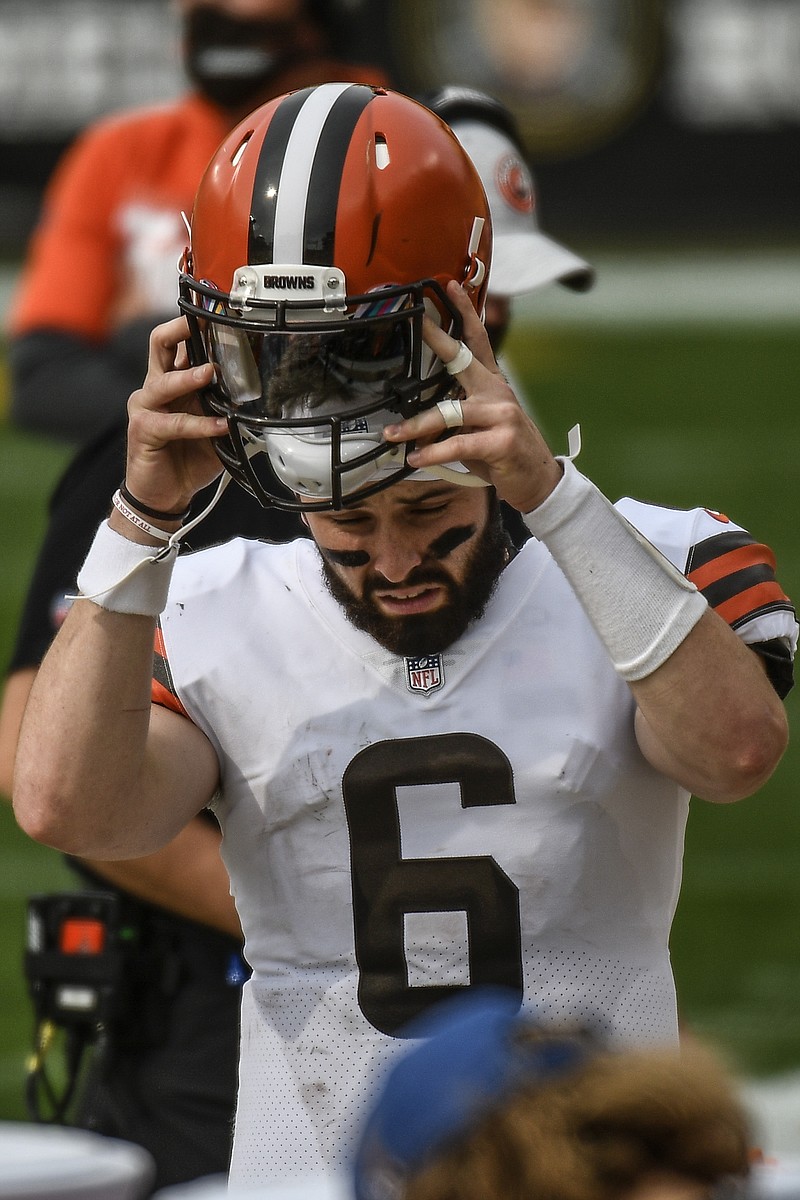 Cleveland Browns quarterback Baker Mayfield (6) pulls off his helmet on the sideline after being sacked by the Pittsburgh Steelers during the first half of an NFL football game, Sunday, Oct. 18, 2020, in Pittsburgh. (AP Photo/Don Wright)

PITTSBURGH -- One by one the dominos toppled.

The NFL's best running game fell first. The passing game came next, quickly followed by the optimism that somehow things would be different for the Cleveland Browns.

It never is. Not in Pittsburgh anyway. Players change. Coaches change. Decades change. The result when the Steelers host the Browns does not. Pittsburgh wins.

And while the Browns might be on their way back to relevance, the Steelers provided a stark reminder of how far Cleveland still has to go in a lopsided 38-7 victory on Sunday.

James Conner ran for 101 yards and a touchdown, Ben Roethlisberger passed for 169 yards and a score and Pittsburgh's defense chased aching Browns quarterback Baker Mayfield in the third quarter. The Steelers improved to 5-0 for just the second time in the franchise's 87-year history.

Pittsburgh sacked Mayfield four times and picked him off twice -- including Minkah Fitzpatrick's 33-yard sprint to the end zone on Cleveland's first possession. That gave the Steelers a quick 10-0 lead they never came close to squandering, extending their home winning streak over the Browns to 17 years and counting.

From start to finish.

The Browns (4-2) were unable to get anything going against a defense that gave Mayfield little time to throw or running back Kareem Hunt any space to maneuver. Cleveland managed just 75 yards on the ground -- 113 below its season average -- and was basically forced to abandon its gameplan after falling behind by 24 points in the first half.

"We just got outplayed today," said Mayfield, who completed 10 of 18 passes for 119 yards to go with a touchdown and the 2 interceptions before being taken out to protect his tender ribs. "That's what happens when you don't execute. Great teams capitalize on your mistakes and they did."

Fitzpatrick, an All-Pro last season, collected his first true "splash" play of 2020 when he stepped in front of a Mayfield pass and sprinted into the end zone. Mayfield never saw Fitzpatrick coming. The same could be said for the rest of the Browns. The franchise's best start since 1994 ended with a thud in a stadium where they haven't won since Mayfield was in elementary school.

A week after allowing Philadelphia to convert 10 of 15 third downs in a closer than expected victory over the Eagles, the Steelers held Cleveland to 1 of 12 on third downs and 0 for 3 on fourth downs, an afternoon of dominance that began with Fitzpatrick's Pick-6.

"I think it sent a message to them that you know, third down wasn't going to be easy sledding today, and we needed it," Tomlin said. "Minkah is an A-player. It was a significant play. He's capable of delivering those type of plays and we'll keep snapping the ball and watching him do it."

First-year Browns Coach Kevin Stefanski has given Cleveland a sense of stability. He shouldered the blame for failing to come up with a plan that could protect Mayfield, and acknowledged the key now will be making sure one loss doesn't mushroom -- not the easiest thing for a team that hasn't reached the playoffs since 2002.

"Calling it sobering is probably a good word," Stefanski said. "We lost this game and we have to react to this one and figure out how we can do better." 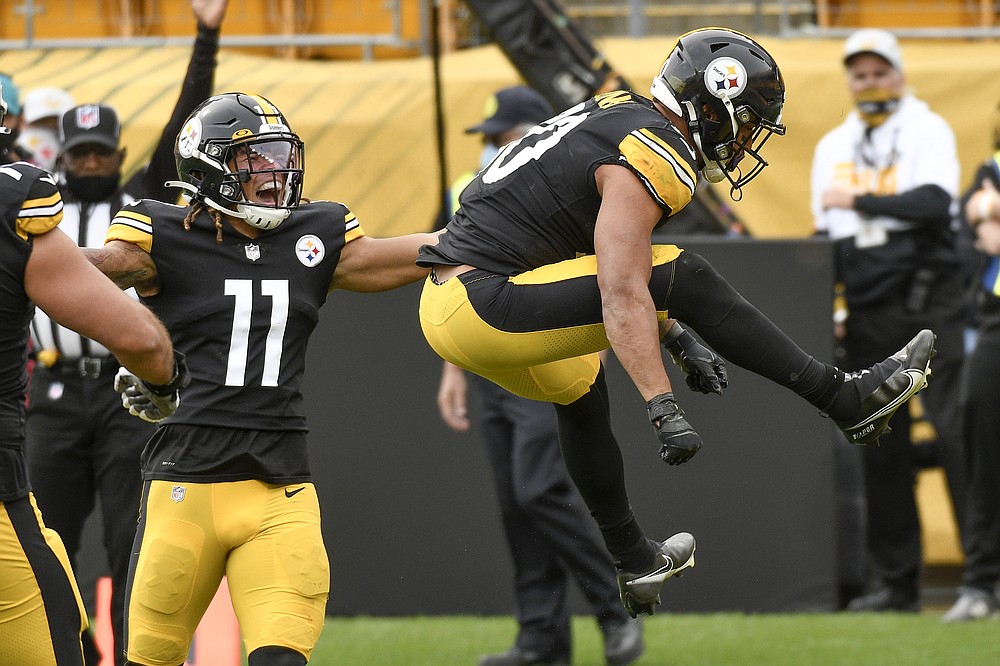 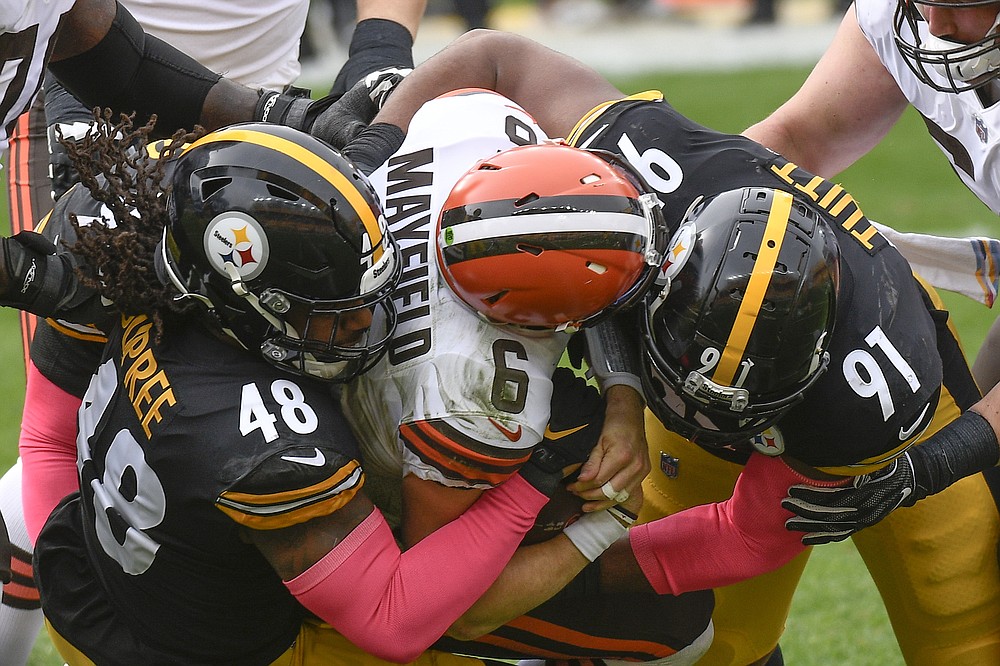 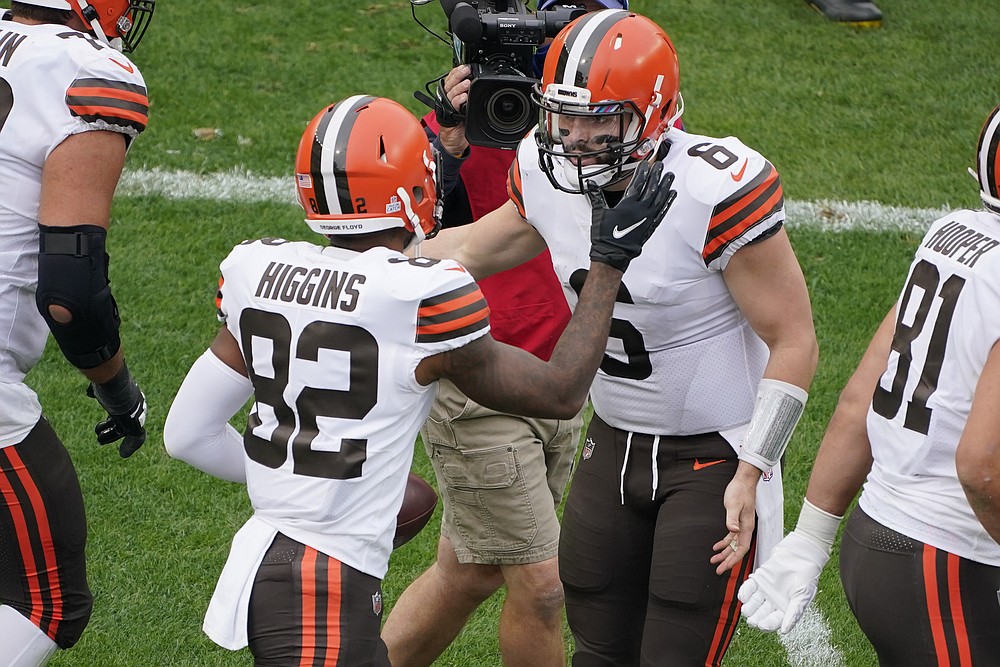 Cleveland Browns wide receiver Rashard Higgins (82) celebrates with quarterback Baker Mayfield (6) after the two connected for a touchdown during the first half of an NFL football game against the Pittsburgh Steelers in Pittsburgh, Sunday, Oct. 18, 2020. (AP Photo/Gene J. Puskar) 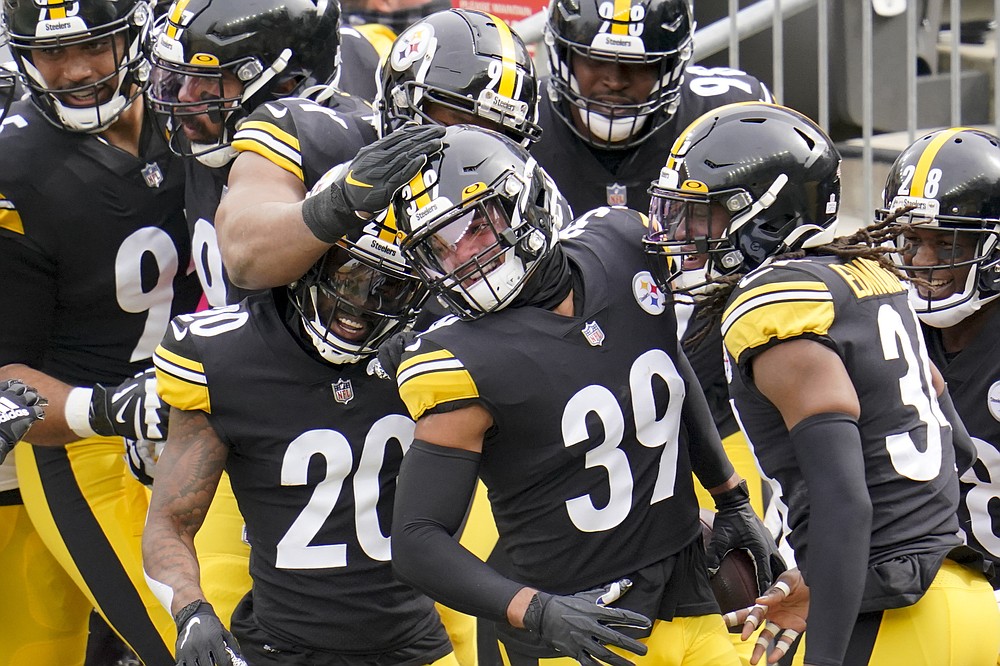 Pittsburgh Steelers free safety Minkah Fitzpatrick (39) is greeted by teammates in the end zone after intercepting a pass buy Cleveland Browns quarterback Baker Mayfield (6) and taking it in for a touchdown during the first half of an NFL football game, Sunday, Oct. 18, 2020, in Pittsburgh. (AP Photo/Gene J. Puskar)
ADVERTISEMENT