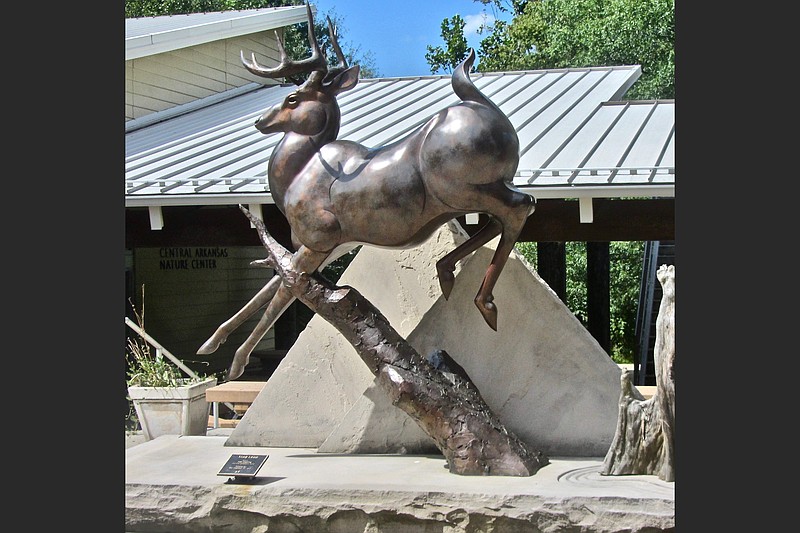 “Stag Leap,” by Tim Cherry, stands outside the nature center. (Special to the Democrat-Gazette/Marcia Schnedler)

Aptly located just a robust pebble's toss from the Arkansas River, Little Rock's fish-flavored visitor attraction is open again in the River Market District behind the Museum of Discovery.

Assorted species inhabiting Natural State waters swim past viewers in the segmented aquarium that stretches nearly the length of the exhibit area at Witt Stephens Jr. Central Arkansas Nature Center. The opposite wall is packed with hundreds and hundreds of colorful lures and other fishing gear.

Reptiles and amphibians also inhabit the aquarium area. On the main gallery's floor, exhibits more appealing to hunters deal with mammals and bird life. The history of human impact on nature in Arkansas is another theme.

Operated by the Arkansas Game and Fish Commission, the 16,230-square-foot center sees its mission as "introducing the public to the importance of conservation education in Arkansas."

The attraction opened in 2008 thanks to funding from the Amendment 75 Conservation Sales Tax passed by voters in 1996. It is one of four such sites, along with Gov. Mike Huckabee Delta Rivers Nature Center in Pine Bluff, Forrest L. Wood Crowley's Ridge Nature Center in Jonesboro, and Janet Huckabee Mississippi River Valley Nature Center in Fort Smith.

The Witt Stephens Center's aquatic focus reflects the fact that nearly one out of six Arkansans has a fishing license. A posting at one end of the aquarium lists the largest catches for a few dozen species. Some weights for the top lunkers are astonishing.

Visitors can be awed at the notion of a striped bass weighing 64 pounds, 8 ounces. Or an 80-pound flathead catfish. Or a brown trout tipping the scales at 40 pounds, 4 ounces. Or, egad, a 215-pound alligator gar — weighing a bit more than this story's author.

Thanks to taxidermy, visitors can check out two black bears along with a bald eagle and a golden eagle. Youngsters may ask their parents why these black bears are actually brown in color. An immediate answer is unlikely to be forthcoming. But you could look it up.

Likely to frighten small children or timorous adults is another piece of taxidermic work. It's a hulking alligator snapping turtle, looking as fearsome as a relic from "Jurassic Park." An adult male's weight can surpass 200 pounds, while life span is believed to reach 100 years.

Visitors heading inside the center pass "Stag Leap," a balletic outdoor sculpture of a deer by Tim Cherry. To the north, a walkway to the riverfront offers opportunities for birding and hiking. Beds of native plants include varieties welcoming to wildlife.

For now, the center has reduced its opening days to Wednesday through Saturday. Closed to visitors is the theater that previously showed a 10-minute movie focused on conservation. The adjoining replica of a trapper's cabin can be glimpsed from behind a barrier but not entered.

Even with the closings, the aquarium and its denizens are well worth a visit. And if watching all those fish swim by whets your taste for seafood, the popular Flying Fish restaurant is just a stroll away on President Clinton Avenue.