Early voting off to a fast start in Northwest Arkansas 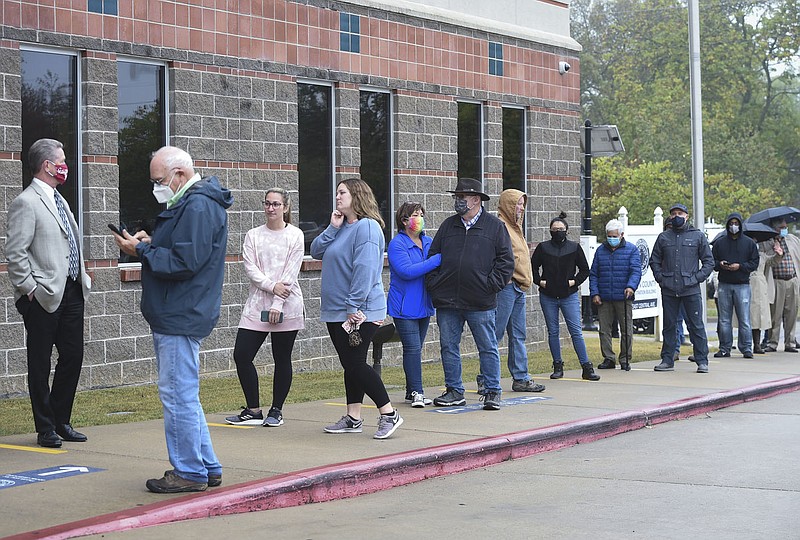 Voters stand in line under a light mist Monday at the Benton County Administration building in Bentonville. Early voting started Monday. The expanded and renovated Quorum Courtroom is being used as a early voting site. Go to nwaonline.com/201020Daily/ for today's photo gallery. (NWA Democrat-Gazette/Charlie Kaijo)

"I've never been more eager to vote in my life," said Jeff Ratcliff of Bentonville.

Ratcliff and his wife, Denise, were among 9,388 people -- or 5.5% of registered voters -- who cast ballots in Benton County on the first day of early voting for the Nov. 3 elections. The county has 169,257 registered voters.

The number shattered the county's 2016 first-day early vote total for the 2016 presidential election. The county had 5,539 early votes, or 3.8% of registered voters, cast ballots on the first day that year, according to information provided by Dana Caler, Benton County Clerk's Office elections administrator/voter supervisor.

For up-to-date voting information, including where and when to vote early this election season, visit our NWA Vote page: nwaonline.com/nwavote.

A small mall in west Fayetteville with several storefronts closed during the pandemic sees few cars in its parking lot on a normal day. On Monday, the lot at the corner of Wedington Drive and Double Springs Road was mostly full. A line of 28 voters wrapped around the corner at noon, approaching the early voting location inside the Diamond Dance Studio. More voters were inside.

Without exception, the waiting voters wore face masks. They stood in the foggy, seeping moist air in a line that took about 30 minutes to get through to vote.

"I've been voting since 1972. I've never missed an election. I think this is by far the most important one I've ever voted in," said Steve Shoemaker of Fayetteville. "Democracy itself is at stake." Any concerns about covid-19 are less important than that, he said.

Ariel McPherson of Fayetteville owns a small business. She said she came early to vote because local races are as vital as national ones.

"Those directly impact my business," she said.

Kristen Blanks of Fayetteville said only about 20% of the country's population votes regularly.

"I want my voice heard," she said.

Nick Stewart of Prairie Grove said he was glad to vote in person. "I'm just happy to exercise the right," he said. "There's no time to wait."

"It's about the only freedom left we have," she said.

Dave Webb of Fayetteville said he voted in person rather than go on Election Day or absentee vote because it was the best way to make sure his vote counted.

In Washington County, about 11,000 absentee ballot applications have been processed and mailed, and 5,400 ballots returned as of Friday morning, said Deputy Clerk Jamie Williams. Washington County has 140,085 registered voters.

Benton County processed and mailed 14,372 absentee ballot applications and received 7,959 ballots back as of Friday morning, Caler said. The county has 169,257 registered voters. The voter registration deadline was Oct. 5.

Ratcliff said he and his wife never considered voting absentee. They voted at the County Administration Building in downtown Bentonville.

They wore masks and said they had concerns about covid-19.

Denise Ratcliff said she was impressed other people wore masks and practiced social distancing. She was also pleased styluses were provided when voting.

"I wanted to get out and get it over and get out of the way of other people," she said.

Snoxhill said she considered voting absentee, but didn't keep up with the dates, so she came out to vote in person.

Mark and Kristi Conner of Bella Vista also voted early Monday. They made two trips to the County Administration Building. The first time a line of voters wrapped around the building. They returned later and voted.

Benton County Clerk Betsy Harrell said voting was "going pretty quickly once they get in the building."

The early voting site at the County Administration Building is in the Quorum Courtroom on the building's third floor.

"We knew today was the first day, and we would give it a shot whether it took two or three days or we saw a line that we could jump into," Mark Conner said.

"I don't know what that process looks like," he said. "You know the concept of voting in person is really what we want to do. We like the idea of the validation piece of it as well."

The weather should be better for waiting outside to vote today, according to the National Weather Service in Tulsa, Okla. There is a chance of rain, but temperatures should warm into the low 70s. 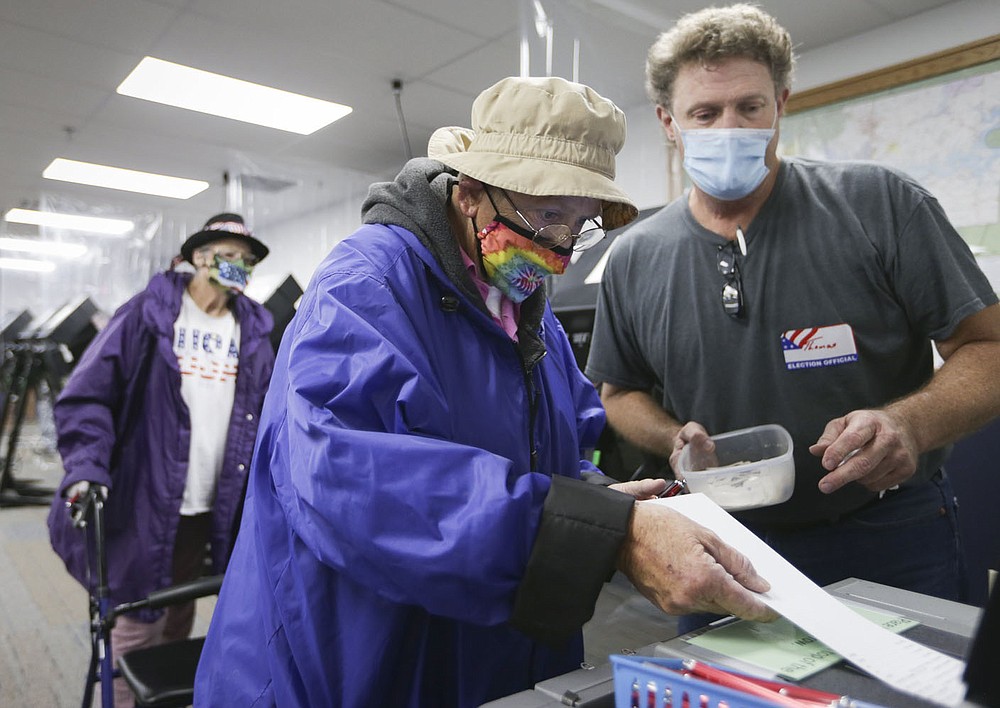 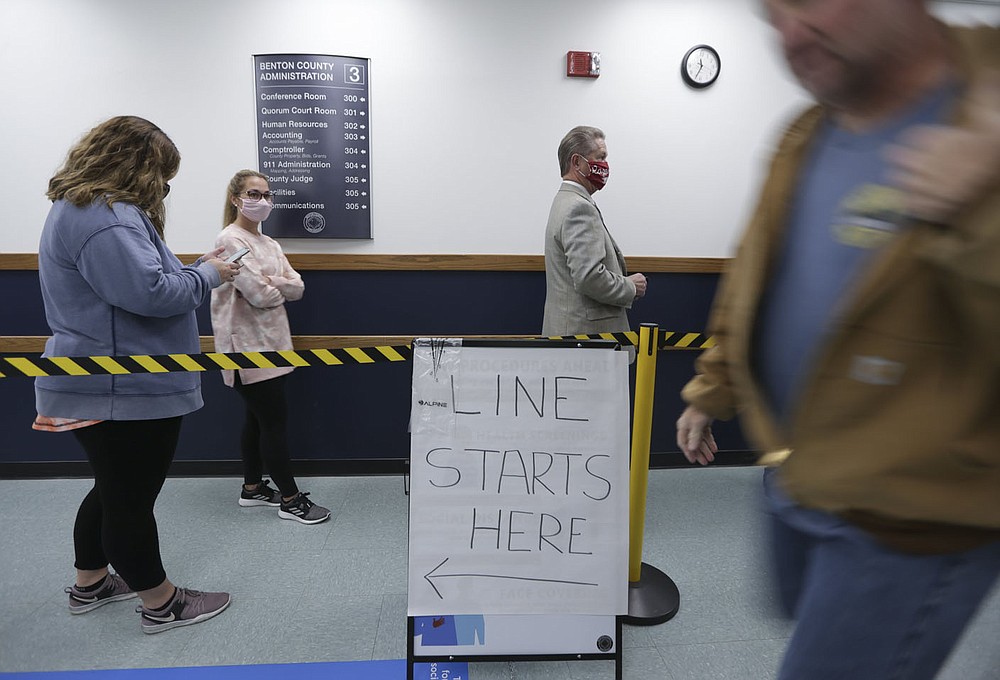