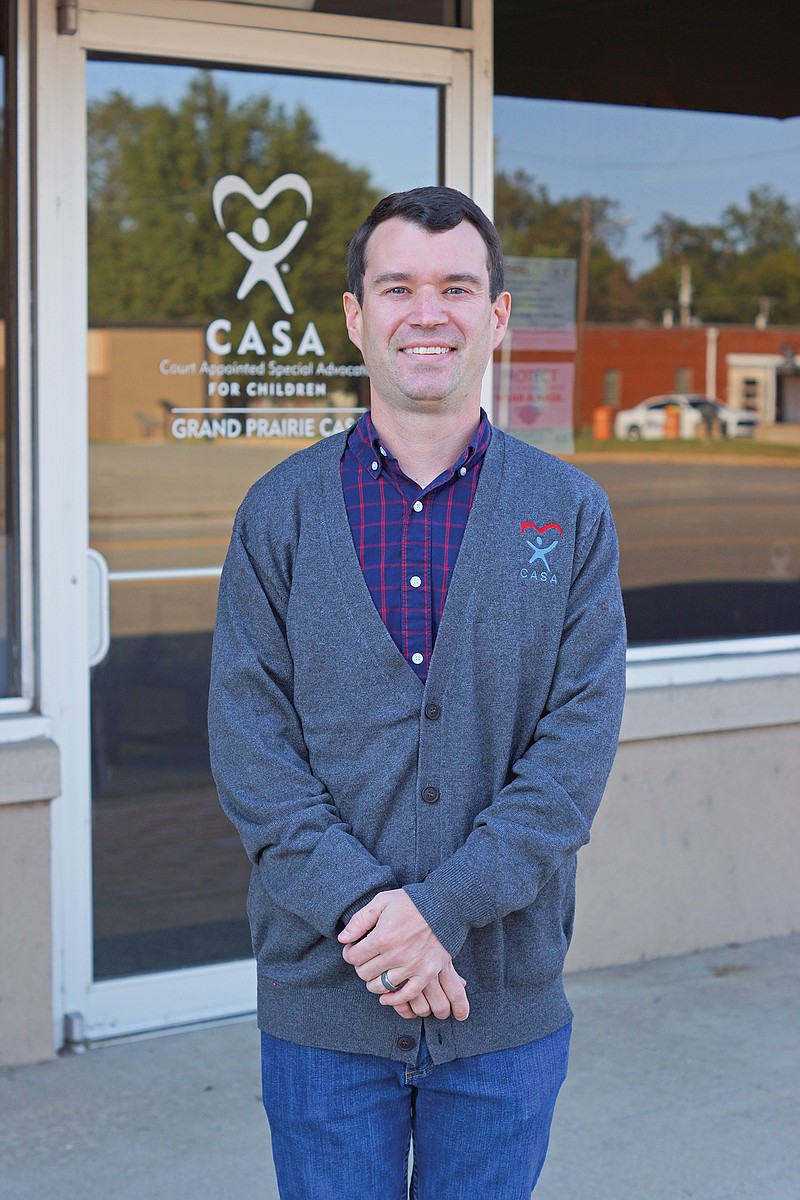 When Cory Spruiell was in high school, he attended Cabot Church of Christ, where his youth minister, Leo Bratcher, pushed Spruiell toward going into the ministry, and Spruiell said he ended up doing that because of Bratcher’s influence. That man is now Spruiell’s father-in-law.

“I didn’t major in business in college because I feared doing meaningless work,” Spruiell said. “He pushed me into ministry, and I went that direction.

Spruiell is the new executive director for the Grand Prairie Court Appointed Special Advocates, or CASA, in Lonoke County. He replaces former director Shelton Walker, who was hired in September of last year. Walker is now executive director of the Open Arms Shelter, a nonprofit in Lonoke that provides care for victims of abuse and neglect in Arkansas.

“Whenever my wife found the job for CASA, we were talking to some friends that were interested in doing foster care and unsure if they wanted to do it,” Spruiell said. “We saw that the executive-director position was open, and she thought I should apply.”

Pat Mahan, president of the board of directors for Grand Prairie CASA, said Spruiell was well-prepared in the interview process.

“Grant funding is one of our major deals, as it is for any nonprofit, and Cory knew that was a weakness of his,” Mahan said. “But he had answers for us, as far as what he was going to do.

“I have never interviewed anybody that has surprised me with his preparedness as much as Cory did. … We are more than pleased with the process he has made in helping us go forward with everything.”

Mahan said that even though Spruiell had never served as an advocate, he thought Spruiell’s strength as a former youth minister and Spruiell’s standing in the community were advantageous.

“We just felt like his passion and the way he talked about CASA and what he had done in his previous job more than made up for his [lack of] experience with CASA,” Mahan said. “Everybody that we talked to about Cory gave us nothing but great reviews.”

Spruiell graduated from Vilonia High School in 2008 and has lived in Cabot since May 2012. He earned a bachelor’s degree in religion from Harding University in Searcy in 2012 and a master’s degree in theology from Harding this past May.

Spruiell and his wife, Ashley, were married in March 2011. Initially, the couple considered being foster parents and, eventually, possibly adopting a child. The couple opened their home to fostering in March 2016.

“I think we just wanted to make a difference and, at the time, we were getting started in our lives and careers and were talking about starting a family,” Spruiell said. “Our home opened to fostering within a couple of weeks of applying, but soon, we found out we were having our first son, so that made things interesting.”

Spruiell and his wife were foster parents from March to November 2016. In that time, they had just one foster child over the eight months. It was during that time when Spruiell got to experience CASA firsthand.

“We had an advocate who was assigned to the child that we fostered, and it really struck me how involved she was in the life of that child,” Spruiell said. “She would color with him or bring him an Easter basket.

“The advocates are the only person who remains the same in a foster child’s case, talks to everyone involved with the child’s life and gives the judge the full picture. … Those are some of the things that really struck me about the program. That’s what I really like about it.”

One of the things that also stood out to him was the fact that, with CASA, “you can be involved with foster care without being a foster parent, which is the category that I feel like I fell into,” Spruiell said. “I had intended to become an advocate but never did. Within the life of a kid who is in foster care, on the case, the volunteer advocate is the only person who remains the same.

“There might be changeover with [the Department of Human Services], attorneys or foster parents, but the CASA representative remains the same from the beginning to the end. I really like that about it.”

Grand Prairie CASA serves Arkansas, Lonoke, Monroe and Woodruff counties. Spruiell said there are roughly 15 cases in each of those counties in which the children don’t have advocates assigned to them. Spruiell said the biggest challenge right now is recruiting.

Typically, CASA recruits for advocates at festivals such as Cabot Fest and the Wings Over the Prairie Festival. Spruiell said CASA also hosts coffee meetings, where they invite people to learn about CASA and what it means to be an advocate. As a result of COVID-19, CASA 101s have switched to virtual meetings at noon and 6 p.m. on the second Thursday of each month. The next information session is scheduled for Nov. 12.

He said that right now, CASA is asking its advocates to visit their children in every environment they are in, including supervised visits with the biological parents, day care and schools.

“That hasn’t stopped. We have just had to make adjustments, including social distancing and masks,” Spruiell said. “We are continuing that, just trying to do it in a safer way.

“We have adjusted in some cases, when the need has arisen, to use FaceTime or Zoom visits with children. But for the most part, we are back to making visits as usual.”