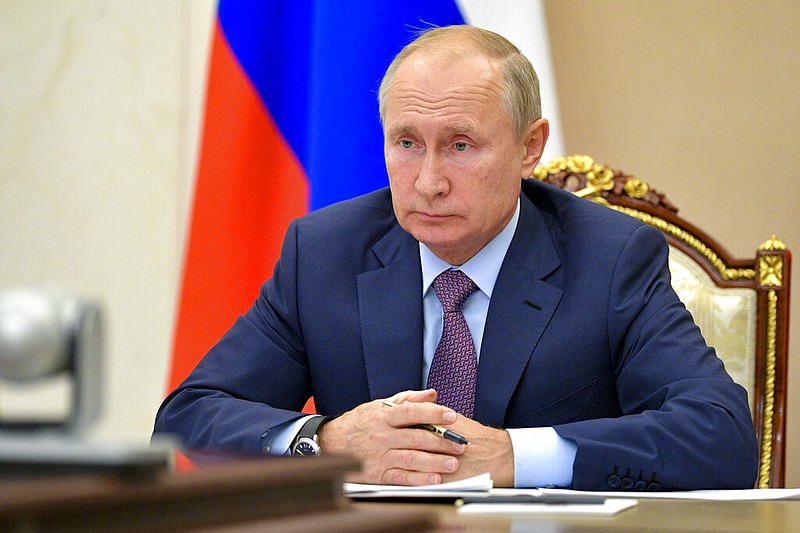 MOSCOW — Russia said Tuesday it's ready to accept a U.S. proposal to freeze the number of nuclear warheads and extend the two nations' last arms control pact for one year and Washington responded that it's prepared to make a quick deal.

U.S. State Department spokeswoman Morgan Ortagus welcomed the Russian offer and said that the U.S. is ready to quickly clinch an agreement.

"We appreciate the Russian Federation's willingness to make progress on the issue of nuclear arms control," Ortagus said in a statement. "The United States is prepared to meet immediately to finalize a verifiable agreement. We expect Russia to empower its diplomats to do the same."

The statement from the Russian Foreign Ministry marked a shift in Moscow's position after Russia and the U.S. rejected each other's offers regarding the New START treaty that expires in February.

The ministry noted that it's ready for a deal if the U.S. does the same and doesn't put forward any additional demands, the statement read.

The New START treaty was signed in 2010 by then U.S. President Barack Obama and Russian President Dmitry Medvedev. The pact limits each country to no more than 1,550 deployed nuclear warheads and 700 deployed missiles and bombers, and envisages sweeping on-site inspections to verify compliance.

After both Moscow and Washington withdrew from the 1987 Intermediate-Range Nuclear Forces Treaty last year, the New START is the only remaining nuclear arms control deal between the two countries.

Russia has offered its extension without any conditions, while President Donald Trump's administration initially pushed for a new arms control agreement that would also include China.

It recently modified its stance and proposed a one-year extension of the 2010 treaty, but said this must be coupled with the imposition of a broader cap on U.S. and Russian nuclear warheads. The cap would cover warheads attached to battlefield weapons, which are limited by the New START treaty that only restricts strategic nuclear arsenals.

Russia has agreed to a one-year extension but resisted a broader cap on warheads until Tuesday.

Lavrov also noted that Moscow wouldn't accept the U.S. demand to have intrusive verification measures like those that existed in the 1990s when inspectors were positioned at missile factories. Moscow appears to still resist the deeper inspections, which aren't envisaged by the New START.

Daryl Kimball, executive director of the Arms Control Association in Washington, said that "a one year politically binding warhead freeze could be a useful confidence-building measure if combined with a one year New START extension, with the option of an additional extension adding up to a total of five years."

"It would be a step in the right direction that would avert, for now, an all-out arms race," Kimball said, adding that it would give Washington and Moscow more time for further talks on a new deal to cut their nuclear arsenals.

In the closing days of his reelection bid, Trump has looked for ways to boost his foreign policy record, and although he says he favors nuclear arms control, he has called New START flawed and unfavorable to the U.S. Last year, he withdrew the U.S. from the INF treaty with Russia, and he waited until this year to begin engaging with the Russians on the future of the New START deal.

Hans Kristensen, a nuclear weapons expert at the Federation of American Scientists, tweeted that President Vladimir Putin was offering a deal that would fall far short of the Trump administration's original demands, including its insistence that China becomes part of a new treaty.

"For Trump, accepting Russian position would constitute astounding walk-back: No "fix" of New START, no improved verification, no inclusion of "outside" weapons, no China," Kristensen said.

Democrat Joe Biden, who was vice president when New START was negotiated during the Obama administration and ratified by the Senate, has said he wouldn't hesitate to agree to Putin's original proposal for a five-year extension of New START. That would be followed by negotiation of a follow-on deal.