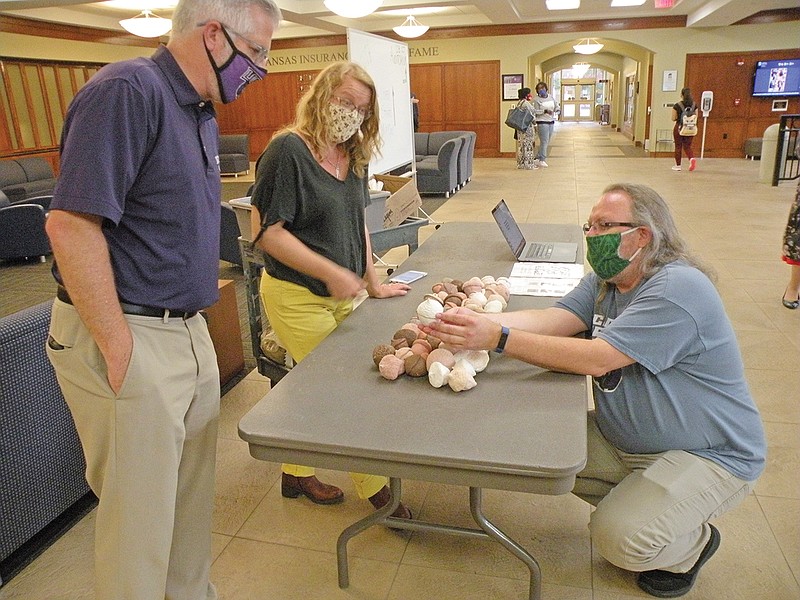 CONWAY — The University of Central Arkansas continues its celebration of the ratification of the 19th Amendment, which made it illegal to discriminate on the basis of sex when voting. The Centennial Suffrage Celebration began Aug. 26 with the opening of a fiber-arts exhibit, Threads Through Time, at the Baum Gallery of Fine Arts and continues throughout October with a variety of events.

Liz Smith, UCA associate professor of ceramics and associate chairwoman of the art department, has been working on the Acorn Project for several months with UCA students and various community collaborators to create a large-scale representation of the U.S. flag made with ceramic acorns. Smith said the acorns are made of “eight different colors of clay, representing a variety of skin tones that represent the diverse population of our country.”

Smith said the flag made of acorns is a “visual metaphor for the importance of a representative voting system that includes equal access for all of the diverse constituents that make up the whole of the United States.”

“Just as women were once denied the right to vote, still in our country, every person does not have equal access to voting,” she said. “Disenfranchised voters impact all of us by not allowing for the creation of a representative government.”

Smith said she chose the acorn “because it is a seed that grows into an oak tree … something that is strong and lasting, just as each vote counts toward policy decisions in our government that have significant and lasting outcomes. These enduring policies require that all voices are part of the decision-making process so all voices are represented.”

Smith visited several groups, including those at College Square and Independent Living Services, to demonstrate how to sculpt an acorn before the pandemic hit in March, but then made a YouTube demonstration video to send to others, along with the materials needed for the project. Once the acorns were crafted, Smith collected them and fired them in a kiln.

Smith was able to meet recently with members of the UCA women’s softball team to demonstrate how to make the acorns. That workshop was facilitated by Rio Sanchez, a senior UCA student from Erie, Colorado.

“I heard about the Acorn Project through my professor Dr. Brown (Riva R. Brown, associate professor of public relations) during my Writing for Public Relations class,” Sanchez said.

“I thought it was a great project that I personally would like to get behind and possibly get some of my teammates involved in. At the end of practice, I asked my coach if I could make an announcement about an opportunity we could volunteer to be a part of. When I explained it to my teammates and coaches, they all liked the idea,” she said.

“My coaches were really excited to be a part of it. My head coach, David Kuhn, has a passion for voting and civil rights, so he took it upon himself on the spot to reach out to Liz personally, schedule a day for us to make acorns and canceled practice to be able to devote our time to the project,” Sanchez said.

“The team was excited to be able to take part in such a unique but powerful project. They loved the idea and the individual care it took to help create so much art with such a strong statement while also being able to have fun with it and enjoy making their own acorns,” she said.

“My coach was happy to take time out of practice to discuss why the project was important. He used to be a social-studies teacher and loves to teach or provide the tools to help the girls learn more than just softball,” Sanchez said. “He is also a veteran, so that just adds to the importance of the project for him.

“Personally, I felt like this was a very powerful project that I would be proud to get behind and be a part of. I love art, so the idea of making so many acorns for a massive flag immediately resonated with my love for art. I strongly support voting rights, and I really liked the idea of showing support through Liz Smith’s vision.”

Jordan Johnson, a junior from Paola, Kansas, said, “It was nice for all of us girls from different backgrounds to come together and do a project that focused on voting rights for women as a whole, along with people of color. Each of us forming the acorns to represent all people was really cool to see and be a part of.”

Jaylee Engelkes, a junior from Greenbrier, said, “I liked the idea of how diverse each acorn was, coming from different girls on my team. The process was special because not one acorn was the same.”

Reagan Sperling, a senior from North Little Rock, said, “It was really unique that every acorn was different, just like every person, and all got the same treatment to be a part of the big picture.”

Smith reached out to others on campus as well. Employees in the offices of the president, provost and chief financial officer participated in the Acorn Project.

“I serve in a number of roles in Delta, but one role is as campus adviser to the Lambda Upsilon chapter at UCA,” Sharkey said.

“For the acorn project,

Dr. Seymour (Gayle Seymour, associate dean of the College of Arts, Humanities and Social Sciences and organizer of the Suffrage Centennial Project) asked whether the UCA chapter would be interested in working with Professor Smith to make acorns,” Sharkey said.

“When she told me how many they needed for the entire project, I reached out to Deborah Bland, who is the Arkansas state coordinator for Delta, to determine whether it was feasible to get several Delta chapters from across the state to participate. I thought this would be a great project for our members because of our history and connection to the suffrage movement,” Sharkey said.

“Once the idea was approved, we had a Zoom meeting with the Arkansas Social Action Committee chair, Cheryl Powell, several Delta chapters, Dr. Seymour and Professor Smith. After that meeting, presidents and other leaders from Delta chapters across the state coordinated with Seymour and Smith to drop off the acorn supplies at a designated location and pick them up once they were done,” Sharkey said.

“The importance of voting was always stressed to me by my parents, the late Joe and Wilma Stiffin,” said Sharkey, who joined Delta Sigma Theta in 2009. “They made sure my sisters and I were registered to vote, got educated on the issues and voted.”

Smith recently made a trip to Forrest City to pick up 500 acorns made by Delta Theta Sigma members across the state.

“Delta chapters made more than 1,000 acorns in total,” Smith said. “They were a real saving grace for this project.”

Sharkey said Delta Sigma Theta was organized in 1913, and many of its early members supported the suffrage movement.

“Delta women and so many others worked to allow all women to find their voice … a seat at every table,” Sharkey said Aug. 26 during the kickoff of the Suffrage Centennial Celebration at UCA. “All have a place in the room, but there is still work to do. We cannot afford not to vote.”

The Acorn Project will be installed on campus at Alumni Circle in front of Old Main and will be available for public viewing at a reception at 1:40 p.m.

“Since this [reception] is a short outdoor event, it is open to the public,” Seymour said. “However, we will have strict requirements for social distancing, and masks are required. Staff volunteers will be standing by to enforce these requirements.”

Seymour said a Community Suffrage Centennial Sing-Along and Persona Poetry, with projections by Sharon Louden, will also be presented at 6:30 and 7:30 p.m. Oct. 20 at Alumni Circle.

Additional events at Alumni Circle include a public performance by Core Dance titled Nevertheless, She Persists, with spoken word provided by The Writeous Poets and transparent fashions by Jillian Gregory at 7 and 8:30 p.m. Oct. 22.

Sharon Louden will present a public lecture, Living and Sustaining a Creative Life During a Pandemic, via Zoom with livestreaming on Facebook. The Zoom link is https://uca-edu.zoom.us/j/91288002964?pwd=M1A5Q2tTYmpUcDQreWRWelArMTVPUT09. The meeting ID is 912 8800 2964, and the passcode is 080425.

Masks will be required, as will social distancing, for all public events.

For more information on any of these events, visit uca.edu/cahss/suffrage-centennial.