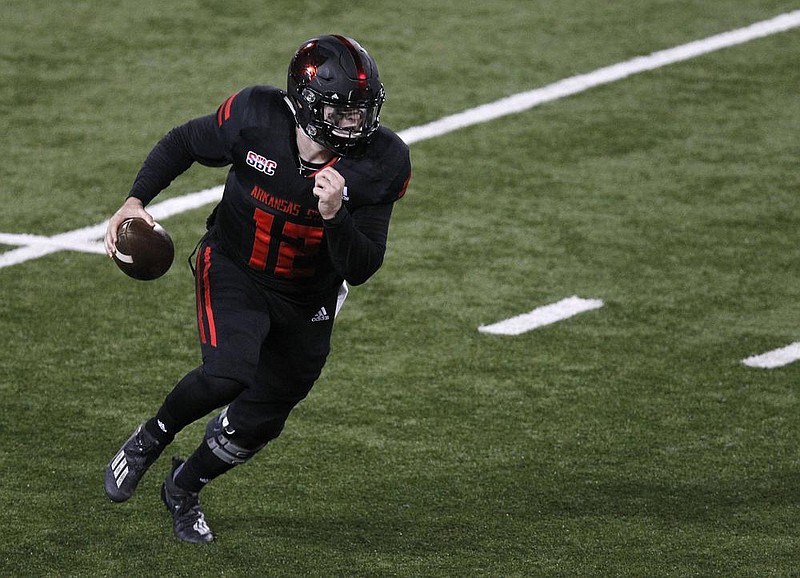 Arkansas State quarterbacks Logan Bonner (left) and Layne Hatcher have put together a quarterback rotation that has put up big numbers for the Red Wolves this season, despite the belief by many that platooning the position rarely works. “For Logan and Layne to be so similar and for the offense to not change when either goes in, to me, is the remarkable part,” ESPN color analyst Mike Golic Jr. said. (Arkansas Democrat-Gazette/Thomas Metthe) ( Arkansas Democrat-Gazette / Thomas Metthe)

Green often is not alone in asking that question. With junior Logan Bonner and sophomore Layne Hatcher rotating at quarterback through Arkansas State University's first five games, fans, media, players and even ASU's head coach have wondered the same thing.

"I don't know who's out there," Coach Blake Anderson has said several times this season, including after ASU's 59-52 win over Georgia State on Thursday. "I truly don't."

Bonner and Hatcher have become sort of a college football phenomenon over the past few weeks. Sure, plenty of teams have attempted the two-quarterback rotation or a variation of the "QB platoon." But few teams have been as successful as Arkansas State, at least through five games.

The saying goes that "if you have two quarterbacks, you have none," which applies to the majority of quarterback rotations that typically fail within the first half of a season. But not for Arkansas State, which is reinventing the wheel.

"Honestly, no one has given it that long of a shot," said Riley Nelson, who went through a similar quarterback rotation at BYU in 2011. "I think Arkansas State has a chance to be the first to give it an honest look and work the kinks out. I'm not ready to definitively say it can or cannot be successful because no one has given it a true faith effort.

"If Arkansas State does and it works, it could be the next step forward in the evolution of offense for all of football."

Bonner and Hatcher are on pace to become the third quarterback duo to each throw for over 2,000 yards in the same season. They would join Texas Tech's Baker Mayfield and Davis Webb (2013) and Arizona State's Rudy Carpenter and Sam Keller (2005). But both those duos accomplished the feat because of injuries, not by using a rotation format.

When you add Bonner and Hatcher's stats together through five games, they're nearly equal to or better than the past three Heisman Trophy winners at the same point in their seasons:

That's not to say "Logan Hatcher" or "Layne Bonner" -- which has become a fan-favorite way to refer to the rotation -- is going to win the Heisman Trophy, but it certainly illustrates the unprecedented season the duo is putting together.

In many ways, one could simply switch Bonner's No. 12 for Hatcher's No. 3 and few would notice.

Bonner has thrown for 938 yards, 11 touchdowns, 3 interceptions and has a 63.9% completion percentage.

Hatcher has thrown for 896 yards, 10 touchdowns, 1 interception and has a 63.3% completion percentage.

"For Logan and Layne to be so similar and for the offense to not change when either goes in, to me, is the remarkable part," said Mike Golic Jr., who called ASU's game against Georgia State on ESPN. "Because of their skill set, they're so comparable. I mean, the offense doesn't have to change. Everyone else can go out there and keep playing the same way. I think that's the remarkable part is that they almost seem to be carbon copies of each other."

The secret to the rotation's success can be explained in three factors.

First, it starts with the other 10 guys around them.

"When you look at the receivers, running backs and the O-line, we knew we were going to be successful on offense this year," Hatcher said. "And we never thought it revolved around the quarterback."

Secondly, it's the simplicity of the rotation that offensive coordinator Keith Heckendorf has designed.

And finally, it's the mindsets of the two quarterbacks -- a do-whatever-it-takes-to-win mentality, which includes helping the other quarterback.

"Some of it is I'll go in and I'll see what type of coverage they're in, and I'll tell [Hatcher] when I come out that this certain play will probably work," Bonner said. "And he'll go in there, call that play and score. So it's all for the benefit of the team. If I don't say something, we might miss a shot to go down the field and score, and we might lose."

The two-quarterback system has worked to varying degrees for prominent teams in the past.

The most notable would be Nebraska winning the 1970 national championship with Van Brownson and Jerry Tagge, and Florida doing the same in 2007 with Chris Leak and Tim Tebow. The difference between those rotations and ASU's is that the previous ones were used in only special packages to accommodate a more mobile quarterback.

Arizona, though, did something similar to Arkansas State in 1998, rotating Keith Smith and Ortege Jenkins every quarter. Like Bonner and Hatcher, Smith and Jenkins were similar quarterbacks, accounting for a combined 3,112 total yards and 23 touchdowns while leading Arizona to a 12-1 record.

"You've got to have a unique group of guys or two guys to be able to do it," Jenkins said. "You've got to have a great head coach and coaching staff that are bought into the dynamic of what we're trying to do with the 'two-headed monster.' We were all bought in because we were winning games. So you've definitely got to have guys that are unselfish, you've got to have a coach that says it's about the team and not the individual, and if you can get that, it works.

"We did it. We went 12-1 and almost won the national championship. The longevity of it? I don't know. But it can work."

Most of the time, teams don't stick with the system either because it doesn't work, one quarterback separates himself from the other or because of an injury. And in a season where one quarterback could test positive for covid-19 on any given week, the rotation benefits Arkansas State, Heckendorf and Anderson have said.

The Nelson and Heaps rotation exemplifies why rotating two guys can often benefit teams if there's an injury, but Nelson admits there's a lot of obstacles with the system.

"Mike Leach talked a few years ago how QBs should be like pitchers that can be used situationally," Nelson said. "Tough thing about that is that the mound is the same height, slope and distance from home plate. Every look a QB gets has the possibility to be the first time they have ever seen that look, so it's imperative for them to get a ton of volume of reps.

"The demise of every two QB situation is impatience. Implicitly, each member on the staff has their bias and while they hold that bias close to their chest to not offend their boss, when adversity hits -- tough opponent or a player slumping -- that bias comes out and people start subtly pushing for one or the other."

That hasn't happened at Arkansas State through five games. And a big reason why, Bonner and Hatcher said, is because of the coaching staff's belief in the system.

Heckendorf has experience doing this, most famously rotating Marquise Williams and Mitchell Trubisky at North Carolina in 2015. Williams ended up winning the battle after a few games, and the Tarheels went 11-3. Two years later Trubisky was drafted 2nd overall by the Chicago Bears.

Heckendorf, now in his second season at ASU, said he's learned from the rotations he had at North Carolina that it can work effectively with the right players and right system.

"I think we're in a unique situation because we've got two guys with a lot of experience," Heckendorf said. "Most programs around the country, they're trying to find one quarterback or they have guys that are talented on their roster, but they have no game experience.

"I think we're in a unique situation, and instead of just following the traditional mold of we have to name one starter because everybody thinks that's what you have to do, we've just allowed those guys to play, and I think what we're seeing is two really talented kids that are helping this football team.

"I think they're both chomping at the bit at their opportunity every series they get."

That's what makes it go -- Bonner and Hatcher's competitiveness with each other combined with their willingness to put the team first.

When that mentality goes away, that's when the rotation will no longer work, Heckendorf said. Right now, it's working on all cylinders.