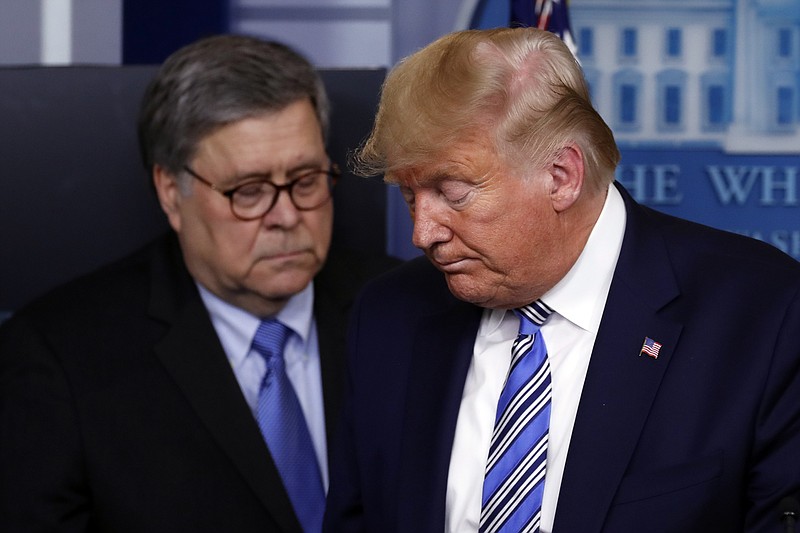 FILE - In this March 23, 2020, file photo President Donald Trump moves from the podium to allow Attorney General William Barr to speak about the coronavirus in the James Brady Briefing Room in Washington. The relationship between President Donald Trump and top ally Attorney General William Barr is fraying over the lack of splashy indictments so far in the Justice Department’s investigation into the origins of the Russia probe, according to people familiar with the matter. (AP Photo/Alex Brandon, File)

With just two weeks to go before Election Day, Trump for the first time explicitly called on Barr to investigate the Bidens and even pointed to the nearing Nov. 3 election as reason that Barr should not delay taking action.

"We've got to get the attorney general to act," Trump said in an interview on "Fox & Friends." "He's got to act, and he's got to act fast. He's got to appoint somebody. This is major corruption, and this has to be known about before the election."

Julian Zelizer, a presidential historian at Princeton University, suggested that Trump's pressure campaign on Barr has moved into uncharted territory for presidential politics.

"The question is, Does Barr erode the guidelines and reforms from the post-Watergate era and move forward with this?" Zelizer said. "We are seeing a total politicization of the justice system in the final stages of an election."

The president has been referring to a New York Post report published last week that cites an email in which an official from Ukrainian gas company Burisma thanked Hunter Biden, who served on the company's board, for arranging for him to meet Joe Biden during a 2015 visit to Washington. The Biden campaign has rejected Trump's assertion of wrongdoing and noted that Biden's schedule did not show a meeting with the Burisma official.

Trump has yet to specify what crime he believes the Bidens have committed, and he has suggested to voters that Biden belongs in jail.

The Justice Department did not respond to requests for comment on the president's call for an investigation.

In addition to his call for a Biden probe, the president has become frustrated with Barr over the pace of the Justice Department's investigation into the origin of the Russia probe, which will not be completed by Election Day.

Trump and his allies had high hopes for the probe, led by Connecticut U.S. Attorney John Durham, betting it would expose what they believe is wrongdoing when the FBI opened a case into whether the Trump campaign was coordinating with Russia to sway the 2016 election.

But a year and a half in, there's been only one criminal case: a former FBI lawyer who pleaded guilty to altering a government email about a former Trump campaign adviser who was a target of secret FBI surveillance.

Trump's hasn't hidden his frustration. He recently retweeted a photo of Barr with the caption "for the love of GOD ARREST SOMEBODY." During a rally in Arizona on Monday, he suggested that Biden would be in prison if Barr wasn't such "a very nice man."

"I know people that would have had him locked up five weeks ago," Trump said. "Bill Barr is a very nice man and a very fair man. And in many ways, it doesn't make some of us happy."

Although Barr is broadly in agreement with Trump on the need to investigate the origins of the Russia probe, he's bemoaned Trump's lack of understanding about the intricacies of the legal system and the steps that need to be taken to complete an investigation.

Barr was in Florida on Tuesday speaking at a law enforcement conference.

He has remained relatively quiet after U.S. attorneys announced charges against a group of men accused of plotting to kidnap Michigan Gov. Gretchen Whitmer, a Democratic ally of Biden's.

"He's toned it down, but it's hard to know what else might be going on behind the scenes," Carl Tobias, a constitutional law expert at the University of Richmond, said of Barr.

While Barr has kept a lower profile in recent weeks, he has publicly sided with Trump on election matters. He said foreign nations could print counterfeit ballots, something intelligence officials say there's no evidence of and would be nearly impossible to do.

After Trump encouraged North Carolina voters to vote twice to try to test the system, Barr declined to definitively say it was illegal, instead saying he wasn't familiar with the laws in every state.

Trump's call for a Justice Department investigation of the Bidens came just one day after 11 GOP House members sent a letter to Barr calling for a special prosecutor to look into whether Biden received foreign money during his tenure in the Obama administration and if he allowed Hunter Biden "to peddle access to his father with foreign business entities."

R. Michael Cassidy, a legal ethics expert at Boston College's law school, said the push might be at odds with the department's historical resistance to getting involved in shaping elections, but he added that Barr -- much like the president who appointed him -- has demonstrated a willingness to bend norms.

"Remember, this is the same attorney general who said that stay-at-home orders imposed at the state levels were the greatest intrusion on civil liberties since slavery," Cassidy said. "He is a norm breaker. He's not a traditional attorney general."

Information for this article was contributed by Mike Balsamo and Deb Riechmann of The Associated Press. 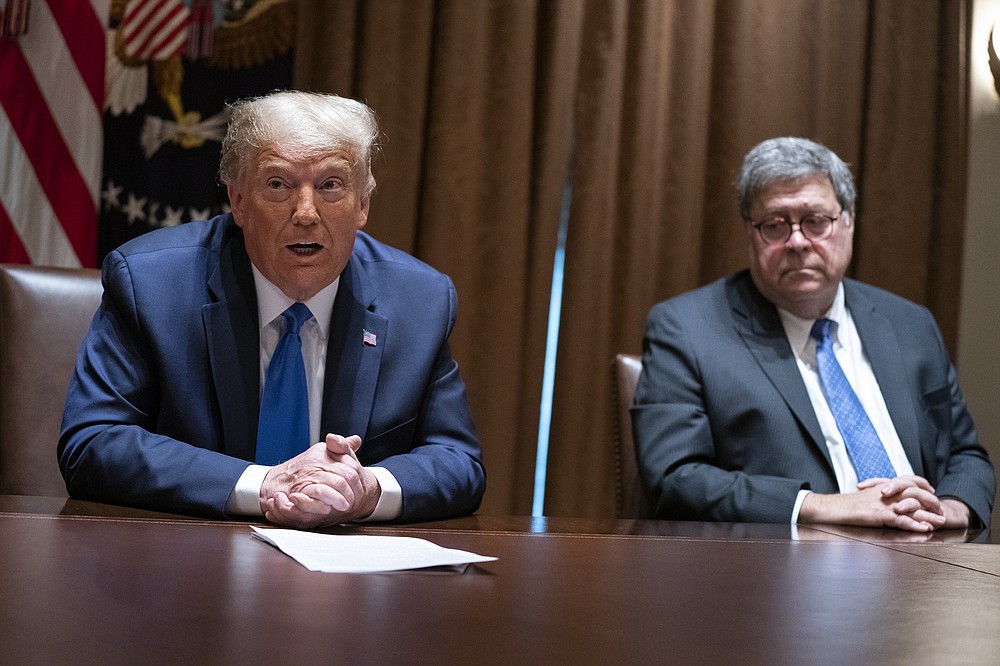 FILE - In this Sept. 23, 2020, file photo Attorney General William Barr listens as President Donald Trump speaks during a meeting with Republican state attorneys general in the Cabinet Room of the White House in Washington. The relationship between President Donald Trump and top ally Attorney General William Barr is fraying over the lack of splashy indictments so far in the Justice Department’s investigation into the origins of the Russia probe, according to people familiar with the matter. (AP Photo/Evan Vucci, File)
ADVERTISEMENT