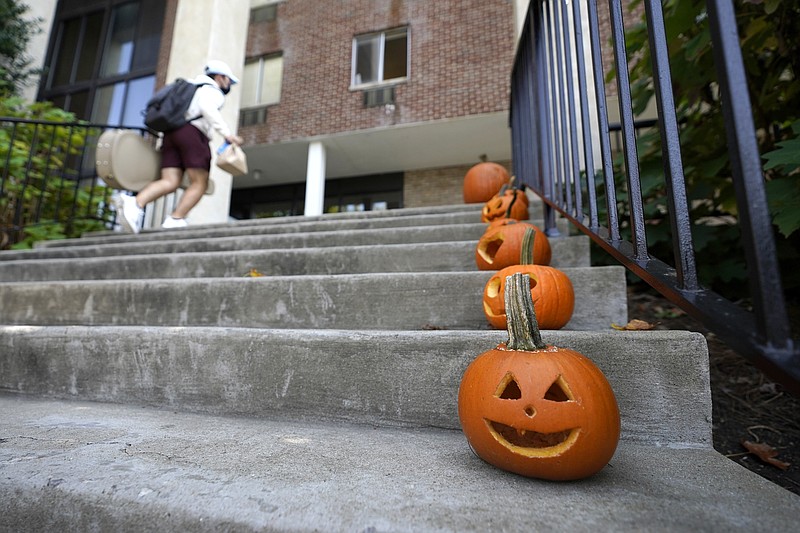 A man wears a face mask to protect against COVID-19 while walking near Jack-o'-lanterns line up on steps at Belmont University, the site of the final presidential debate between Republican President Donald Trump and Democratic candidate former Vice President Joe Biden, Tuesday, Oct. 20, 2020, in Nashville, Tenn. The debate is scheduled for Thursday, Oct. 22. (AP Photo/Julio Cortez)

WASHINGTON -- President Donald Trump headed for another of his big rallies Tuesday, two days ahead of the final presidential debate, while former Vice President Joe Biden holed up for debate preparation.

In the lead-up to Thursday's face-off in Nashville, Tenn., Trump appears to be trailing in polls in most battleground states. Also trailing in fundraising for campaign ads, Trump is increasingly relying on his signature campaign rallies to deliver a closing message to voters and maximize turnout among his GOP base.

Three weeks of wrangling over the debate format and structure appeared to have subsided Tuesday after the Commission on Presidential Debates unveiled a rules change intended to reduce the interruptions that plagued the first Trump-Biden encounter last month.

[Video not showing up above? Click here to view » https://www.youtube.com/watch?v=kyEi6I5uO-M]

For Thursday's debate, Trump and Biden will each have his microphone cut off while his rival delivers an opening two-minute answer to each of the six debate topics, the commission announced. The mute button will not be in use during the open discussion portion of the debate.

Trump's team is calling for a more in-depth focus on foreign policy in the debate, believing it to be a strong suit for the incumbent, but there is not expected to be any shift away from the announced topics, which include a segment devoted to national security.

Trump held a rally Tuesday evening in Erie, Pa., part of the state instrumental in his victory four years ago, when he was the first GOP candidate since Ronald Reagan to carry the county.

Before leaving the White House, Trump taped part of an interview with CBS' "60 Minutes." On Twitter, the president declared his interview with Leslie Stahl to be "FAKE and BIASED," and he threatened to release a White House account of it before its Sunday airtime. He also sat for a town-hall session with news conglomerate Sinclair that is to air today.

Erie County, which includes the industrial city in Pennsylvania's northwest corner, went for former President Barack Obama by 5 points in 2012 but broke for Trump by 2 points in 2016. That swing was replicated in small cities and rural areas, and helped him overcome Hillary Clinton's victories in the state's big cities.

Vice President Mike Pence, meanwhile, was holding tele-rallies intended to boost Republican Senate and House candidates, and he was leading a meeting of the White House coronavirus task force.

Trump was to have been joined in Erie by first lady Melania Trump, in what was to be her first public appearance since she and the president were sickened with covid-19, but her chief of staff, Stephanie Grisham, said Tuesday that Mrs. Trump has a lingering cough and would not accompany the president.

On Monday, the president said he'd be at a disadvantage to Biden in Thursday's debate.

Biden was meeting Tuesday at his lakeside home in Wilmington, Del., with senior adviser Ron Klain, who is in charge of debate preparation. Also on hand was a group of aides that the campaign has purposely kept small to reduce the risk of spreading the coronavirus.

Biden, who also taped an interview with "60 Minutes" on Monday at a theater near his home, had no public events planned for Tuesday or today, and wasn't scheduled to travel except to the debate Thursday. His running mate, California Sen. Kamala Harris was out campaigning, and Biden was expected to receive a late boost from Obama, who was to host an event today in Philadelphia.

About every two days, Biden is tested for the coronavirus and has never been found to be positive.

Biden has been tight-lipped about his preparation for the Nashville debate, saying only that he has focused on watching Trump's past statements on key issues. Biden's advisers see the final debate as a chance to discuss foreign policy, which they see as one of their candidate's strengths.

Biden has praised the Trump administration for helping to broker deals that the Persian Gulf states of Bahrain and the United Arab Emirates signed recognizing Israel, but otherwise he has accused the president of shunning allies and making foreign relations more volatile at most points around the globe.

Combined with mail-in votes that have already been returned, about 3 million Floridians have already voted, two weeks before Election Day. That's nearly 21% of registered voters.

The numbers are the best estimate of Monday's totals, as the counties continuously update the numbers as they come in.

Democrats also slightly outpolled Republicans statewide, with about 150,000 Democrat ballots cast to about 149,000 for the GOP. About 53,000 non-party-affiliated voters also went to the polls Monday.

Cowles said part of the reason early-voting numbers didn't quite reach record highs in the county could be because of the shift by Democrats to mail-in voting.

"How many people who voted by mail normally vote early?" Cowles said, adding that thunderstorms that rolled through Monday also might have affected the numbers.

In Wisconsin, voters lined up Tuesday to cast their ballots on the first day of early in-person voting in the presidential battleground state, marking the beginning of the final push to Election Day in two weeks.

Locations and times to vote Tuesday varied across the state, but lines were reported in Milwaukee, Madison, Green Bay, Kenosha and Sheboygan. Voters can also drop off completed absentee ballots at locations around the state, including in specially installed drop boxes in some larger cities.

A coalition of local and national Black leaders, including the Rev. Jesse Jackson and Justin Blake, the uncle of Jacob Blake who was shot by Kenosha police in August, began a 33-mile march early Tuesday morning from Kenosha to Milwaukee. The rally was to mark the first day of early voting along with calls for justice against police violence, organizers said.

In Michigan, a top election official said Tuesday that the presidential battleground state's 1.5 million people with absentee ballots still in-hand should put them in a drop box or take them to their local clerk's office rather than risk sending them by mail with two weeks to go until Election Day.

Secretary of State Jocelyn Benson said hand-delivering a ballot will ensure that it arrives by 8 p.m. on Election Night and will be counted. She also urged people who still want absentee ballots to request them in person from their clerk instead of by mail.

"We want to ensure that every valid vote counts and is received on time," Benson, a Democrat, told reporters.

As of Tuesday, more than 3 million absentee ballots had been requested in the state, and more than half of those had been returned. People can vote absentee for any reason under a 2018 constitutional amendment approved by voters.

Separately, the Supreme Court will allow Pennsylvania to count mailed-in ballots received up to three days after the Nov. 3 election, rejecting a Republican plea in that state.

The justices divided 4-4 Monday, an outcome that upholds a state Supreme Court ruling that required county election officials to receive and count mailed-in ballots that arrive up until Nov. 6, even if they don't have a clear postmark, as long as there is not proof it was mailed after the polls closed.

Republicans, including Trump's campaign, have opposed such an extension, arguing that it violates federal law that sets Election Day as the first Tuesday after the first Monday in November and that such a decision constitutionally belongs to lawmakers, not the courts.

The state Republican Party chairman, Lawrence Tabas, said the party disagrees with the decision and, noting the 4-4 decision, "it only underscores the importance of having a full Supreme Court as soon as possible."

"To be clear, the Supreme Court decided not to grant a stay -- which does not mean the actions of the Pennsylvania Supreme Court would withstand a legal challenge to their judicial overreach should the court hear the case," Tabas said. 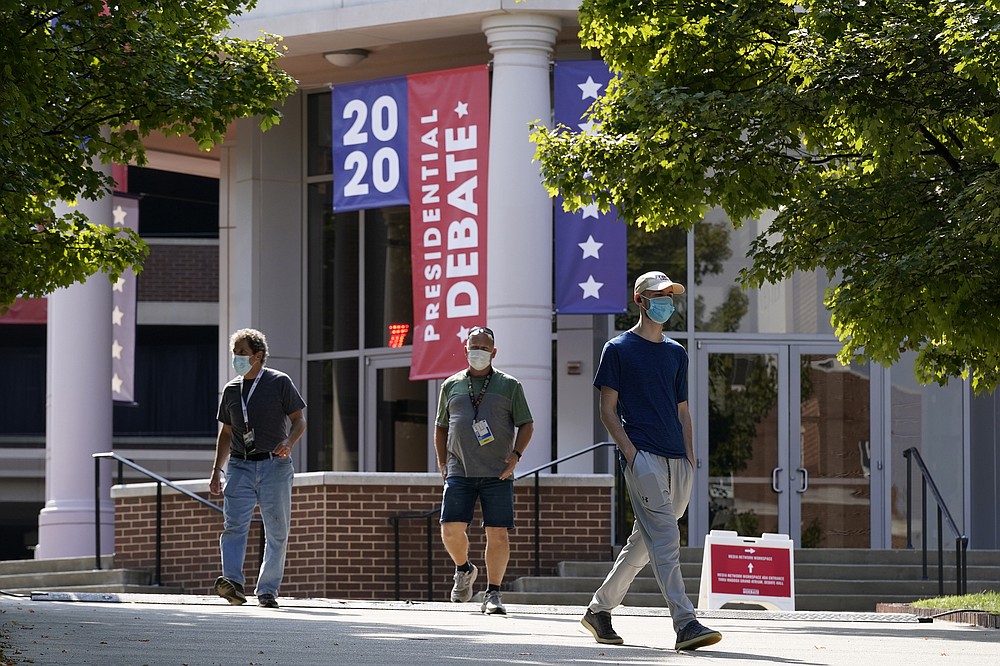 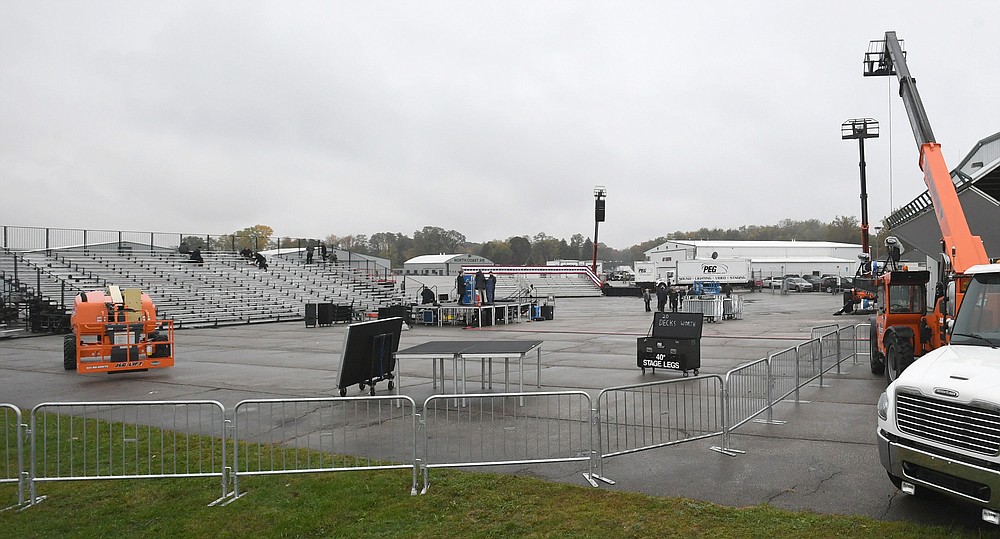 In advance of a rally for President Donald Trump, the stage and seating are shown, Monday, Oct. 19, 2020, being set up near a North Coast Air plane hangar, at right, on the tarmac near the northwest corner of the Erie International Airport in Millcreek Township, Erie County, Pa.Trump's rally is scheduled for Tuesday evening, Oct. 20. (Christopher Millette/Erie Times-News via AP) 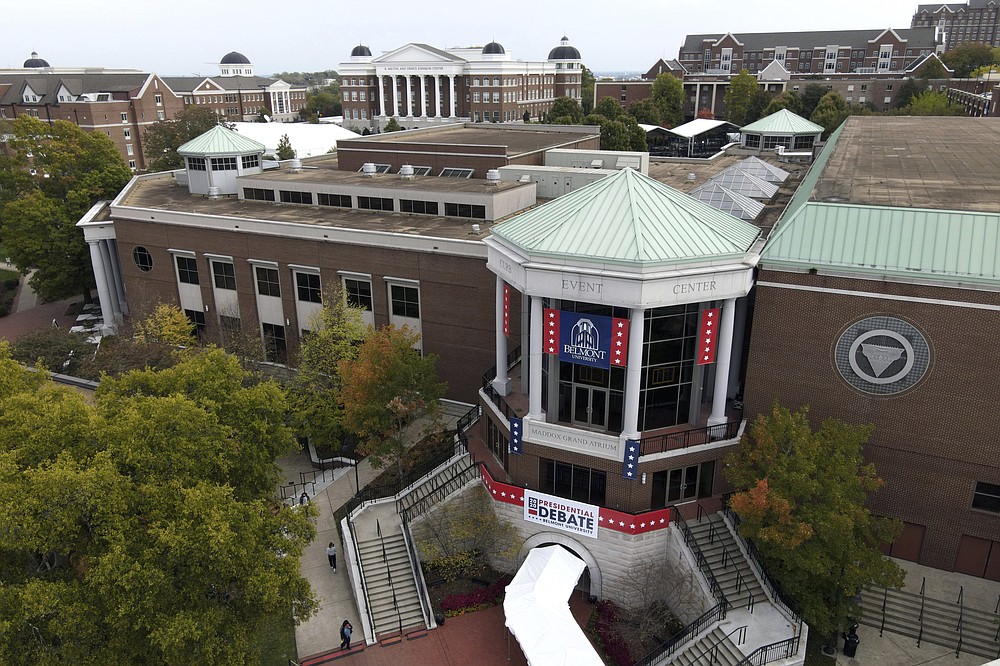 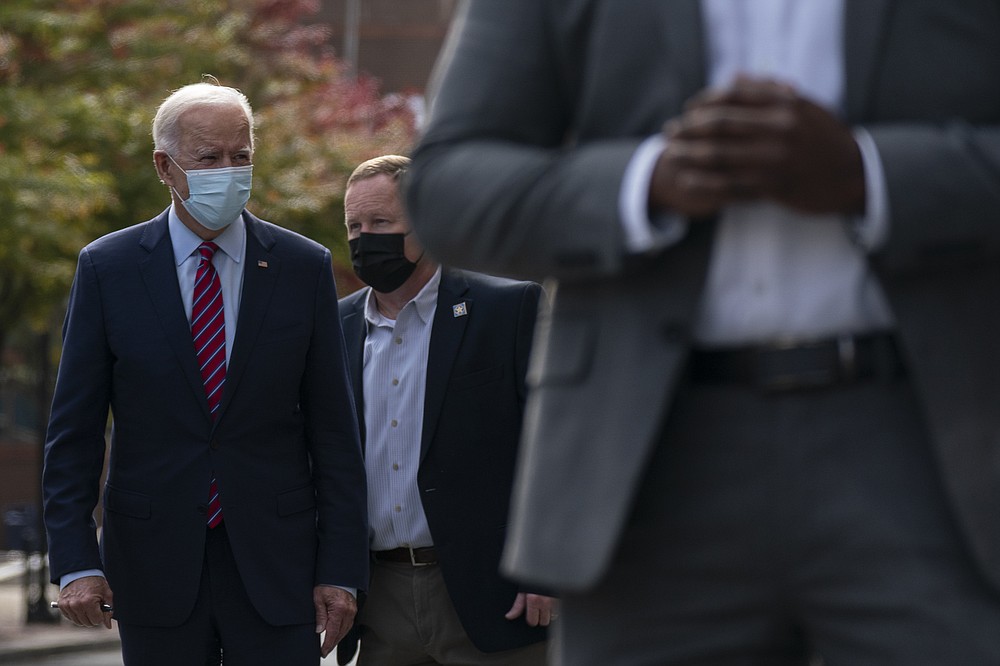 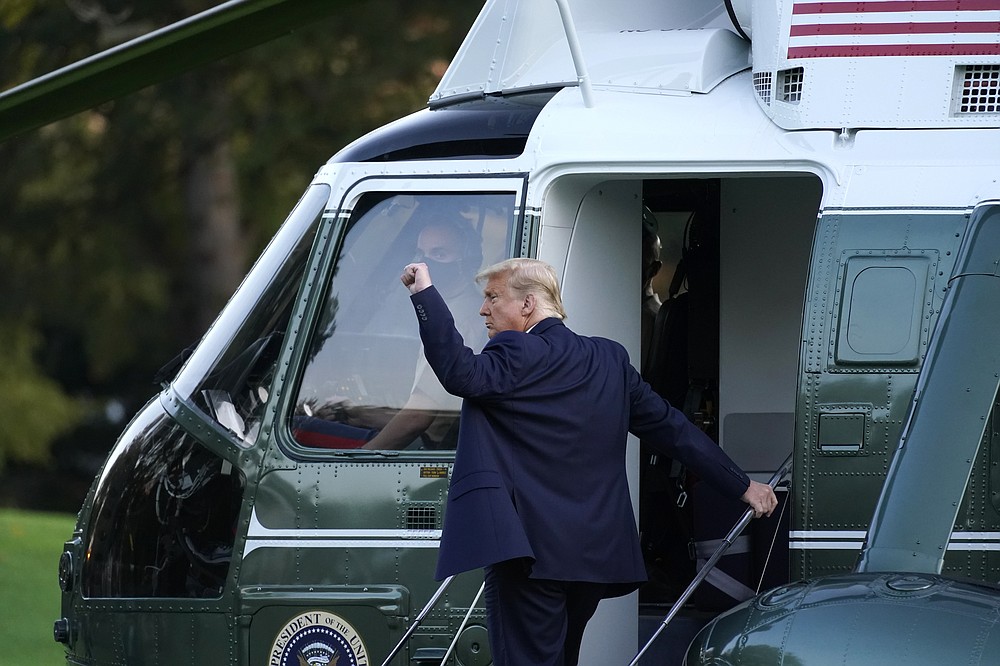 President Donald Trump boards Marine One at the White House in Washington, Tuesday, Oct. 20, 2020, for a short trip to Andrews Air Force Base, Md., and then on to Erie, Pa. for a campaign rally. (AP Photo/Andrew Harnik) 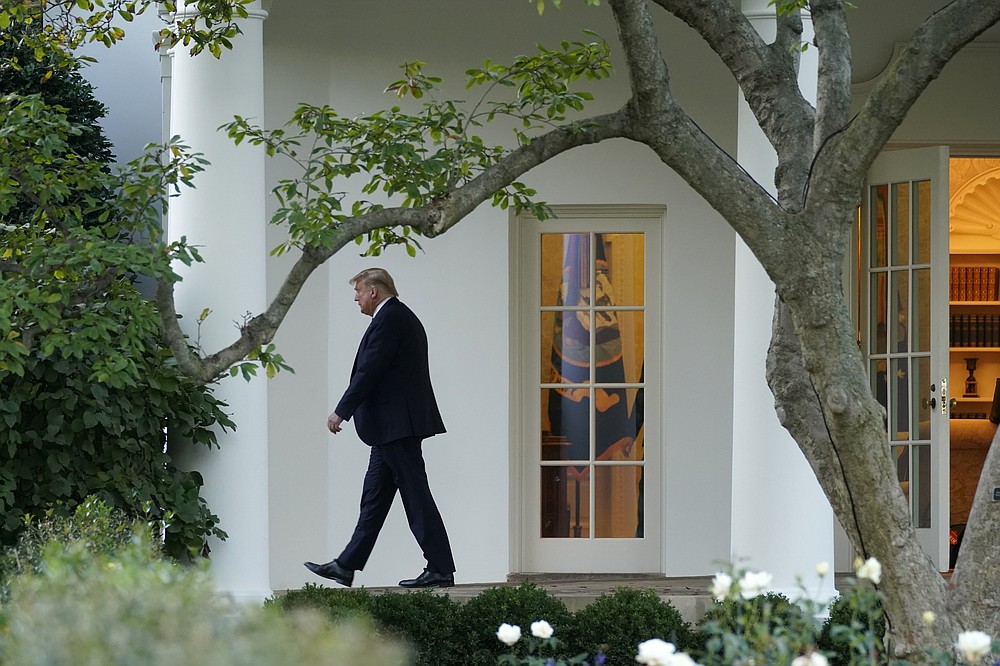 President Donald Trump leaves the Oval Office as he walks to board Marine One at the White House in Washington, Tuesday, Oct. 20, 2020, for a short trip to Andrews Air Force Base, Md., and then on to Erie, Pa. for a campaign rally. (AP Photo/Andrew Harnik)
ADVERTISEMENT