RESTAURANT TRANSITIONS: Festival off but pick up Greek food 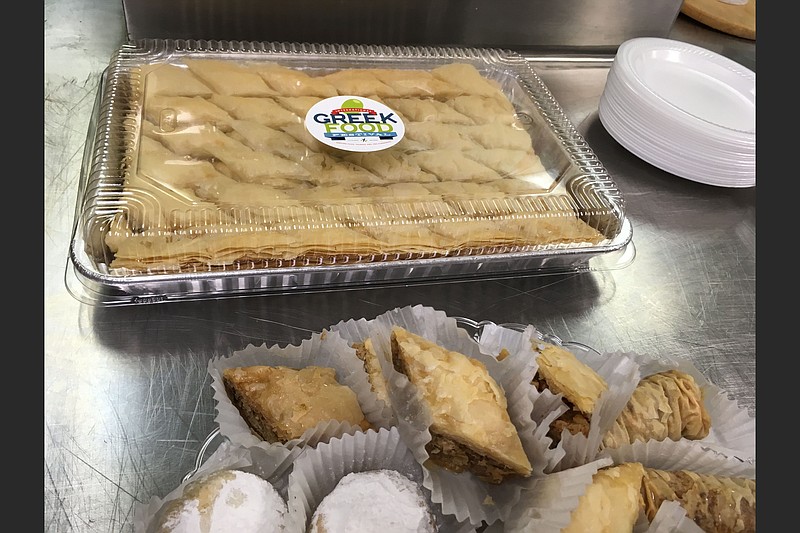 Covid-19 has quashed the entertainment and international market for the annual Greek Food Festival, but you can still pick up baklava Friday and Saturday at Little Rock’s Annunciation Greek Orthodox Church. (Democrat-Gazette file photo)

As with just about everything else, the pandemic has forced changes to the annual International Greek Food Festival, but it hasn't forced a total cancellation. There won't be any entertainment, music or cultural market this year, but you can order food online — gyros, baklava and chocolate baklava, wedding cookies, a Spanakopita Platter (spanakopita and Greek salad) and a Greek Platter (add pastitsio) — for drive-thru pickup, 11 a.m.-7 p.m. Friday-Saturday at the Annunciation Greek Orthodox Church, 1100 Napa Valley Drive, Little Rock. Visit greekfoodfest.myshopify.com. As has been the case for the past 35 years, proceeds benefit eight area nonprofits; see the complete list and get more information at greekfoodfest.com or call the church at (501) 221-5300.

We're standing by for Friday's opening of Cannibal and Craft's new Little Rock branch in the former Ernie Biggs space in the River Market, 307 President Clinton Ave. Hours are to be 3-11 p.m. Tuesday-Wednesday, 3 p.m.-2 a.m. Thursday-Saturday. The phone number is (501) 414-8870; the Facebook page is facebook.com/cannibalandcraftlr.

Jason Reynolds is taking over as executive chef and spearheading a new menu at Petit & Keet, 1620 Market St., Little Rock. Most recently a sous chef at 501 Prime in Hot Springs, Reynolds' credits include two Shreveport, La., restaurants: He was sous chef at Wine Country Bistro and executive chef at Zocolo Eatery. The menu will continue to feature a few of P&K's signature dishes, including the bone-in Berkshire pork chop and miso salmon; Reynolds is adding duck gumbo, crab manicotti and a prosciutto-wrapped sea bass. See the full menu at PetitAndKeet.com. 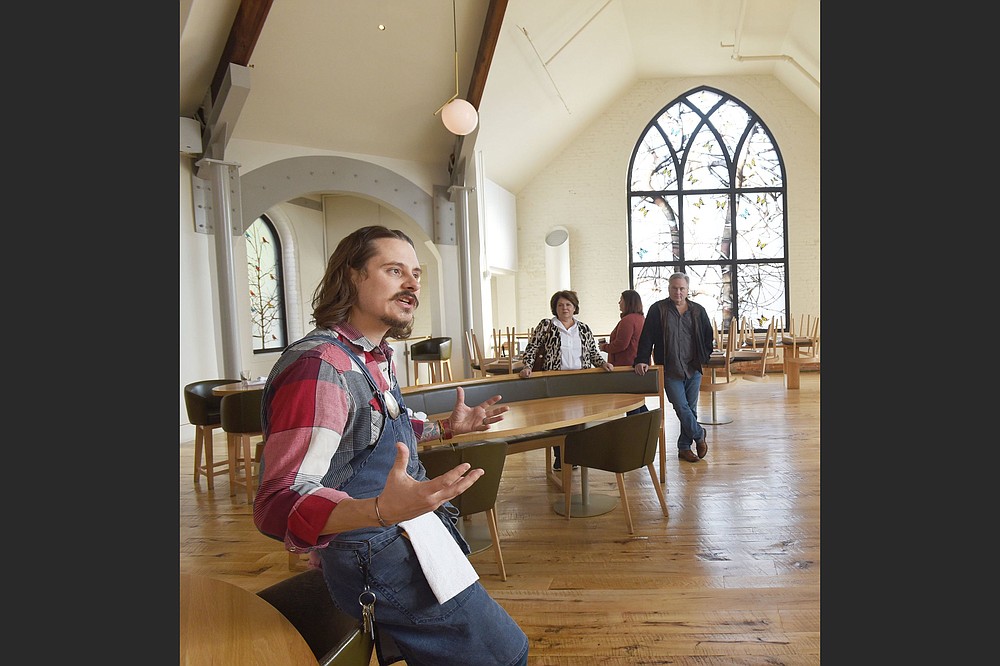 Matthew Cooper is stepping down Dec. 12 as executive chef at The Preacher’s Son in Bentonville. (Northwest Arkansas Democrat-Gazette file photo)

And speaking of chef changes, Matthew Cooper will be stepping down Dec. 12 as executive chef of Bentonville's The Preacher's Son to pursue what a news release describes as "a new project," which it does not define. You may recall that Cooper had previously worked at Aquariva in Portland, Ore., and the Chenal Country Club and Lulav in Little Rock before he became the initial executive chef and general manager of Little Rock's Cache. He left that position at the end of 2014 to take over at what at the time was called The Belfry, in a historic church on Bentonville's A Street, and subsequently also brought along his spice shop, called Dandelion. The restaurant got its current name because Cooper really is the son of a preacher. Cooper's Preacher's Son successor is to be "announced shortly," according to the news release. A "special event" is in the planning stages to honor Cooper's departure that will involve "some of Chef Cooper's signature dishes that regulars and locals have come to love," with further details to be announced "in the coming weeks." The restaurant's hours are 5-10 p.m. Monday-Saturday. Call (479) 445-6065 or visit thepreachersson.com.

What used to be Arbela Middle Eastern Grill, in the Catlett-Prein Tower, 323 Center St., Little Rock (long-time downtowners will remember that this was the second location of Your Mama's Good Food, and the address was 250 W. Fourth St.), has had a change of ownership and name. It's now Maryam's Grill, and the menu, though restructured, is similar: gyros, shawarma, falafel, beef kababs, hummus, baba ghanoush and baklava, plus a slightly larger range of salad options. Hours are 11 a.m.-2 p.m. Monday-Friday, 10 a.m.-3 p.m. Saturday-Sunday (with a separate brunch menu that includes eggs, crepes, pancakes, breakfast burritos and fule — beans cooked with spices, onion, garlic, tomatoes and olive oil). The phone number is (501) 374-2633 ; the website is maryamsgrill.com and the Facebook page is facebook.com/MaryamsGrill.

Arkansas' fourth Chicken Salad Chick, "the nation's only Southern inspired, fast casual chicken salad restaurant concept," will have its grand opening Wednesday at 2235 Dave Ward Drive, Conway. The first 100 guests — properly distanced and returning at a designated time to spread out the numbers throughout the day (show up between 7-10 a.m. to get checked in; you must be 16 or older) — will receive free chicken salad for a year. There will be other grand-opening-week specials and giveaways. Franchisee Melissa Hardcastle also operates one in Jonesboro; there's one in Benton, which opened June 9 at 20370 Interstate 30 North (the franchisees are Emily Gray and Hudson Sandefur). And there's also one in Fayetteville. Hours are 10 a.m.-8 p.m. Monday-Saturday. The phone number we've been given is (501) 382-7899, though as of deadline that takes you to the corporate offices in Auburn, Ala.; the website is chickensaladchick.com and the Facebook page is facebook.com/ChickenSaladChickConwayAR.

We received a routine notice from the Little Rock Police Department that Mama Tana Bar, 7515 Geyer Springs Road, Little Rock, applied to the state Alcoholic Beverage Control Division at the end of August for a license to serve beer on the premises, notifying the community in case neighbors have concerns or would like to contest the application. Owner Ruth Fuentes says she's looking at a target opening date of Nov. 6, and yes, it's the same Mama Tana that was briefly open at 5501 MacArthur Drive, North Little Rock, as Mama Tana Salvadorian Restaurant, and before that she operated a restaurant of the same name at one time at 10308 Chicot Road, Little Rock. Fuentes explains that she moved to North Little Rock in December but shut down in March "because of the covid." Her new establishment will be more of a bar than a restaurant, but she will offer a limited Salvadoran menu. Tentative hours will be 11 a.m.-midnight Wednesday-Sunday. The new place doesn't yet have a phone number.

By the way, Google lists the Geyer Springs street address as the former location of a Professor Bowl. And while we were digging, we encountered on the ABC's most recent list, Sept. 28-Oct. 2, an application that Maurice Mahmoud filed for a restaurant mixed drink maximum permit for Charlie's Place, 8624 Interstate 30, which fronts on Geyer Springs Road, and which used to be Professor Bowl South. Hmmm.

Hot Springs' Mid-America Science Museum is planning an online fundraising event called "Hello Taste," which it describes as a take on the meal delivery box subscription service, 7 p.m. Nov. 19. Chef Ozzie Oseguera from Hot Springs' Bleu Monkey Grill will prepare his signature Bleu Monkey Shrimp in a cooking class, live via Zoom, and demonstrate how to prepare pre-packaged boxed meals. Participants will receive all the necessary ingredients the day before the event. Cost is $150 per box (contains two meals, total of 50 boxes available) through the museum's website, midamericamuseum.org; call (501) 767-3461. The museum's education director, Casey Wylie, will demonstrate the science of cooking. Dessert will come from Kilwins of downtown Hot Springs with beverages from Tri-Lakes Liquor.

And Conway-based Tacos 4 Life, which donates a meal for every meal its customers purchase, came up with 37,676 donated meals at all of its locations on World Food Day, which was Friday exceeding its 30,000-meal goal.