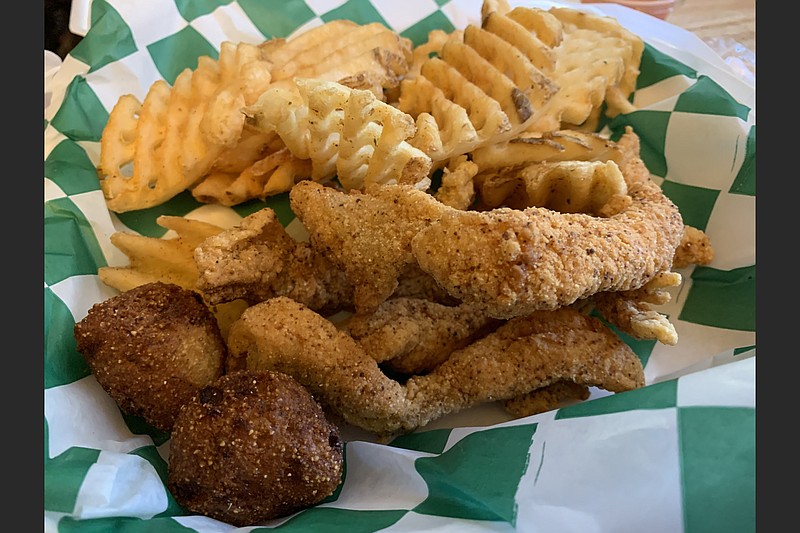 We paid for the two-piece Faith’s Fish Plate at Rock City Kitchen but actually got a third piece of fish. It comes with a side of waffle fries (shown) and slaw (withheld by request). (Arkansas Democrat-Gazette/Eric E. Harrison)

Home, as they say, is where the heart is. And, during the pandemic, for most of us, where the stomach is as well.

As these weeks have stretched into months, we’ve been lucky enough to be able to make pinpoint raids on area dining establishments, snatching up our orders and hastening home with them.

As usual, we’ve mostly stayed within a 15-minute radius so our food will still be hot, or at worst warm, when we get it to our table. We’ve generally avoided chains — another exception this week because the chain is locally owned — to concentrate on local businesses. And we’ve continued our firmly embedded practice of paying for all meals upfront.

HOW IT WENT: The cafe is on the ground floor of a state office building opposite the state Capitol and signs on the doors indicate it’s closed to the general public, but we wandered around to the back side of the building, where there’s patio seating available, and looked hungry through the window; one of the counter folks took pity and let us in. We placed and paid for our order over the counter and it took about 10 minutes to come out of the kitchen. RCK, as it’s logo-ized on just about everything, right down to the bottles of hand sanitizer, is actually pretty fancy for such a small place. The decor features little pots of succulents all around the windows. Seating includes a large central hand-made bench-and-table setup that isn’t exactly practical for social distancing but it’s really cool. The menu focuses on home cooking and soul food, and you’ll have to do a little digging to find the daily specials, which include ribs and soul food plates on Monday; tacos, burritos and quesadillas on Tuesday; wings on Wednesday, Asian plates on Thursday and fish on Friday. There is also apparently a daily pasta.

HOW IT’S GOING: A few customers, apparently all workers in the same office, were awaiting lunch orders when we arrived. Another customer arrived to place an order as we were leaving. 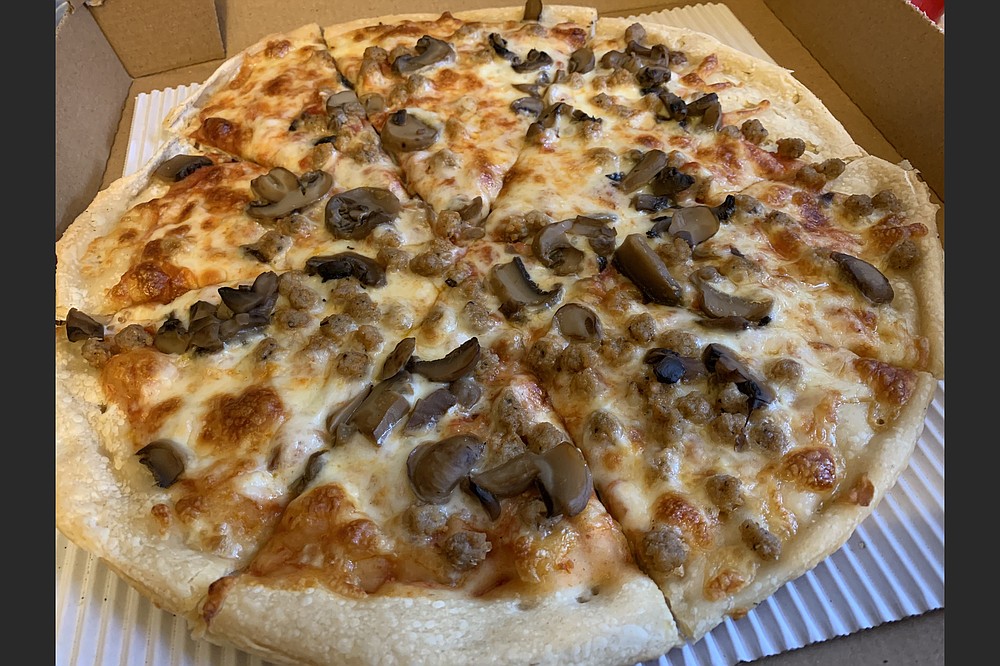 Consistency is a constant at U.S. Pizza, including their headquarters location in Hillcrest, and including this medium sausage and mushroom pizza. (Arkansas Democrat-Gazette/Eric E. Harrison)

U.S. Pizza serves up the epitome of the American-style pie, with a thin, crisped-to-cracker crust — possibly the reason it takes 20-25 minutes to bake — and a nice balance between sauce, cheese and toppings. And consistency has always been one of this Arkansas-based chain’s strong points: You know you can depend on getting the same pie done the same way in any of what are now a couple of dozen restaurants every time. This pizza was no exception — including the 20-minute baking time. The toppings melted into the cheese layer, so the more slightly spicy sausage bits and mushrooms met the tongue than initially met the eye. The crust was crisp right out to the rim.

HOW IT WENT: The dining room is open (so is the patio), so we placed and paid for our off-peak order at the front register, then sought a socially distanced bar stool for our 20-minute wait.

HOW IT’S GOING: There were two other gentlemen at the bar, a few occupied tables in the dining room and a few more on the patio. The parking lot, which was nearly full when we arrived, was nearly empty when we left. 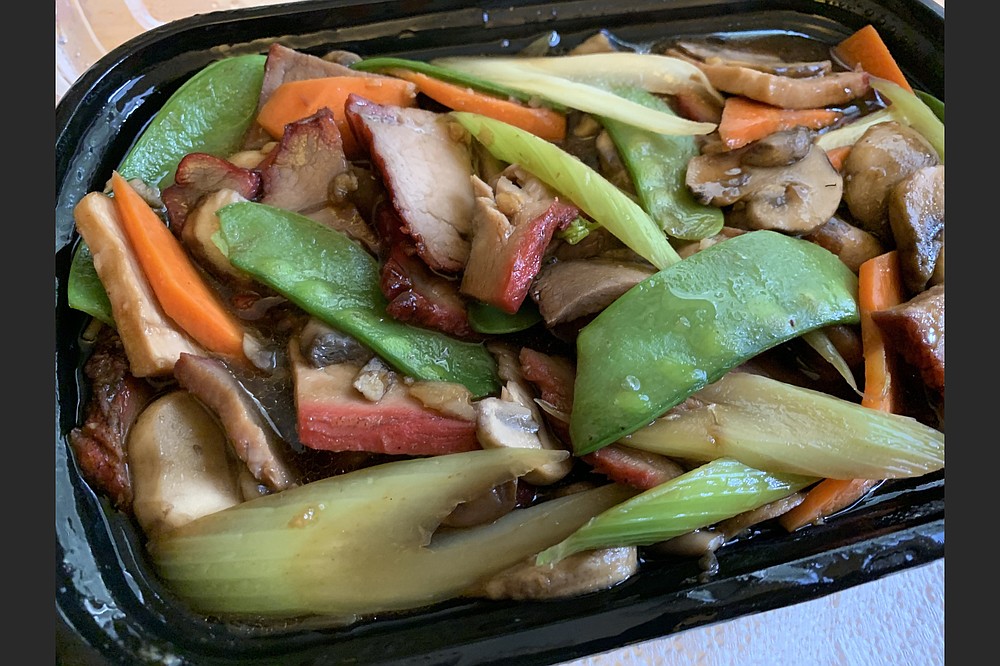 We visited Asia Buffet a few times pre-pandemic, including visits for a review almost exactly four years ago, and found its buffet to be adequate if not terribly exciting. (As with most Chinese buffets, fried stuff and chicken dishes predominated.) Now that the dining room has reopened, so has the buffet. But for the first time, we decided to hit up what for a buffet place is a fairly expansive menu. Our entree featured an ample portion of reddish-edged Cantonese-style roast pork in a rich, slightly sweet brown sauce with snow pea pods, carrots, celery, bamboo shoots — all vegetables we like, so we didn’t leave any of them by the wayside (hint: zucchini). Steamed rice was the right choice (fried is the other option) because we used much of it to sop up the remaining sauce. We also indulged in Asia Buffet’s hot and sour soup, which we had previously enjoyed from the buffet. It’s moderately spicy, though it could use a bit more vinegar, and there’s plenty of tofu, pork and other goodies suspended in the somewhat gelatinous broth.

HOW IT WENT: We placed and paid for order online, and it was waiting for us in the promised 20 minutes.

HOW IT’S GOING: There were perhaps nine or 10 occupied tables, decently spaced out, at the peak of the lunch period, but no other to-go orders pending when we arrived. 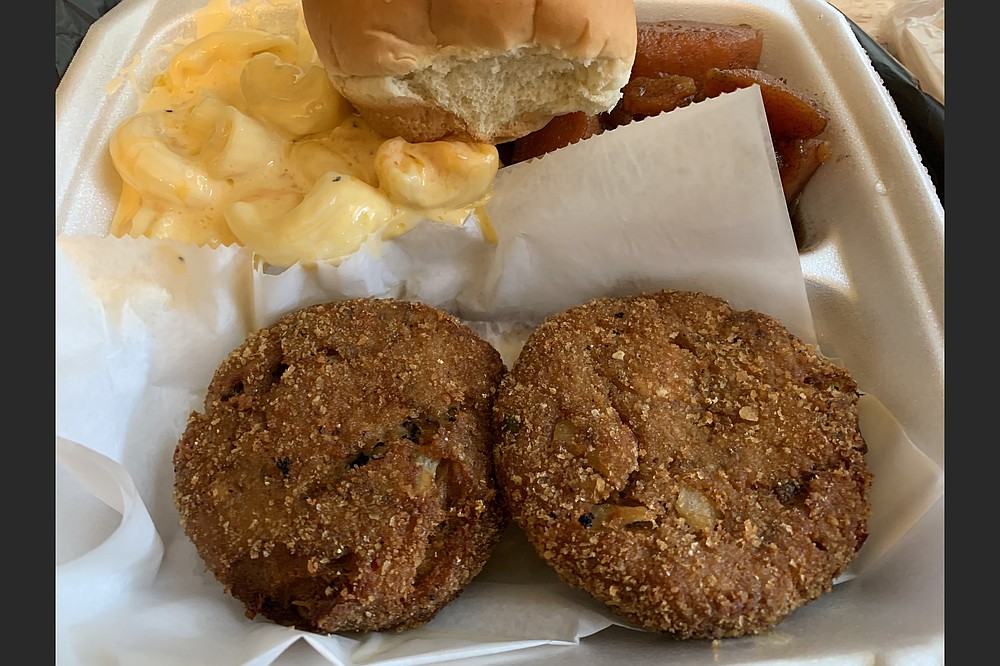 Two huge salmon croquette patties with side yams and mac & cheese made us so full at So Full Cafe. (Arkansas Democrat-Gazette/Eric E. Harrison)

WHAT WE GOT: Double salmon croquettes ($10)

We have a soft spot for salmon croquettes, a childhood favorite of which we just haven’t seen much in recent days. So Full does them up wonderfully: Patties, really, rather than the cone-shaped versions we remember, huge ones, salmon bound up with not too much bread-y filler, charged with herbs, spices and bits of red bell pepper. We ordered the double — two patties — but we would probably have been so full with just the one, especially since we got two sides in more than ample portions: yams and quite possibly the cheesiest mac and cheese we’ve seen in a long while.

HOW IT WENT: One of our colleagues, Business reporter Stephen Steed, turned us on to this place, and we’re glad he did. If you say the name of the place rather quickly, you get a good idea of its nature — “so full” and “soulful” sound a lot alike. The croquettes are among the on-menu, to-order dishes (the place also does daily plate lunches), and there are several signs explaining to customers that to-order items will take 5-7 minutes longer to prepare. We placed our order by phone and arrived 15 minutes later as we were instructed to do. However, we might as well have waited to place the order until we got there because it hadn’t even been started; the people behind the sneeze guards were so nice and sweet that we didn’t really mind the additional 15-minute wait.

HOW IT’S GOING: They’re really not open for dine-in, but several customers were ordering at the front register as well as picking up call-in orders during a recent lunch period. 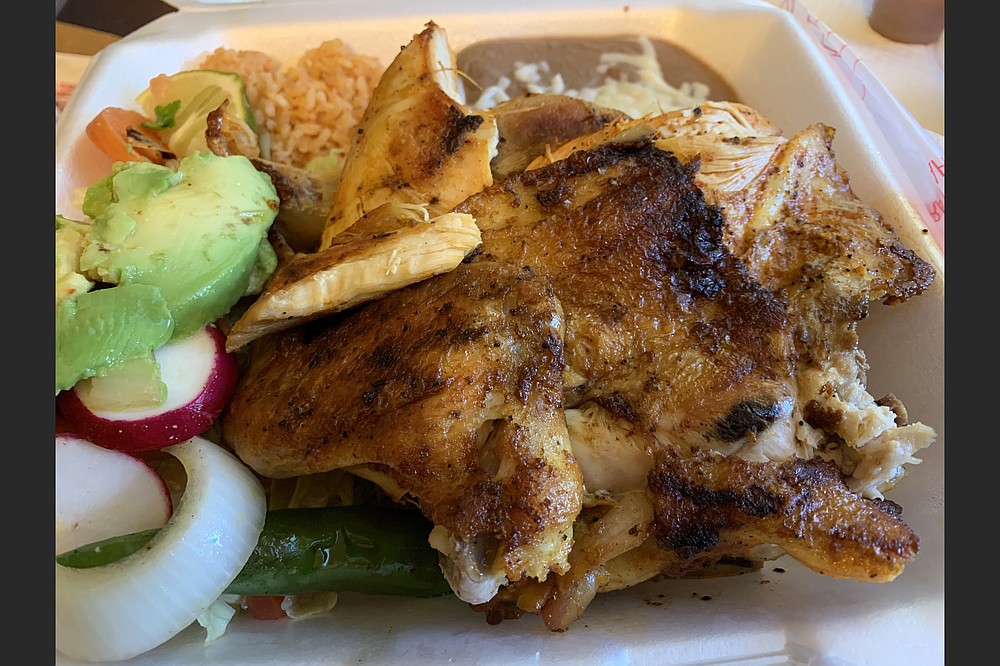 The Pollo Asado from Los Agaveros on South University Avenue is almost a whole chicken for $8. (Arkansas Democrat-Gazette/Eric E. Harrison)

We don’t remember the last time we got so much food for our money as Los Agaveros’ Pollo Asado — if it’s not a whole chicken, it’s darn close. Most of it was still on the bone and fairly moist; a couple of breast chunks were a bit drier. But it was all tasty. It came with a side salad topped with fresh avocado, plus some mildly flavorful rice and a cheese-topped puddle of refried beans. We were almost too full to take on the excellent ceviche, chunks of marinated shrimp with onions, tomatoes, parsley and cilantro, topped by more fresh avocado and three lime wedges, with four crisp tostadas packaged separately in aluminum foil.

HOW IT WENT: The taqueria occupies an “island” in the parking area on the north side of a strip center that over the years has housed a number of establishments of varying duration, including a Baskin Robbins outlet and, most recently, a Chicago-style gyros-and-steak operation. There’s a limited walk-in option, but little parking, so we placed our order in the drive-thru and waited at the window for it to come out — somewhere between five and 10 minutes. The folks inside missed the ceviche part of the order, so adding that at the window may have contributed to the delay. And in any case, it does take time to grill chicken, especially that much chicken.

HOW IT’S GOING: We were the only drive-thru customers at an off-peak afternoon hour.