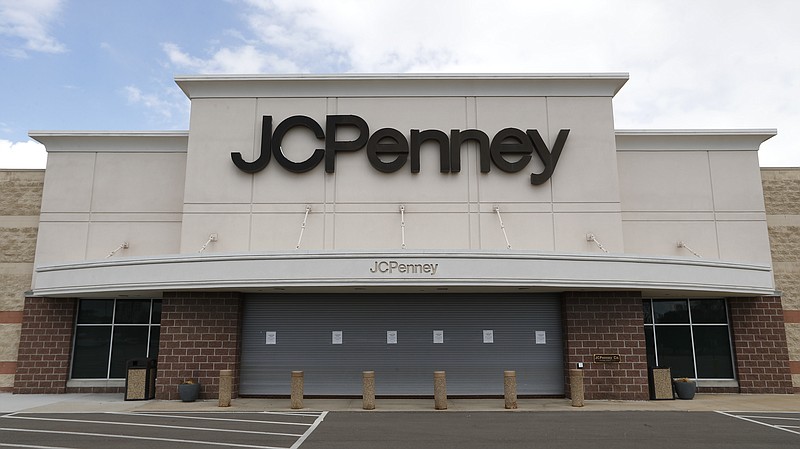 FILE - In this May 8, 2020 file photo, a parking lot at a JC Penney store is empty in Roseville, Mich. J.C. Penney anticipates being out of bankruptcy protection before the December holiday season. The retailer said Wednesday, Oct. 21 that it filed a draft asset purchase agreement under which mall owners Brookfield Asset Management Inc. and Simon Property Group will acquire substantially all of its retail and operating assets through a combination of cash and new term loan debt. (AP Photo/Paul Sancya, File)

NEW YORK -- J.C. Penney believes it will emerge from bankruptcy protection before Christmas under a new ownership agreement that would save tens of thousands of jobs.

The beleaguered, century-old retailer said Wednesday that it has filed a draft asset purchase agreement with the two biggest mall owners in the U.S. Substantially all of J.C. Penney's retail and operating assets will be acquired by Brookfield Asset Management Inc. and Simon Property Group through a combination of cash and new term loan debt.

Details of the deal that is supposed to save roughly 70,000 jobs and avert a total liquidation first emerged last month during a bankruptcy hearing.

J.C. Penney, which even before the pandemic had struggled to compete with the likes of Amazon.com, Target and Walmart, became one of the largest retailers to file for Chapter 11 bankruptcy protection this year amid a wave of store closures forced by the spread of covid-19 infections in the U.S.

More than two dozen retailers have filed for bankruptcy protection since the pandemic closed stores, restaurants, gyms and other businesses across the country.

The Plano, Texas, retailer will shed nearly a third of its stores in the next two years as it restructures, leaving just 600 locations open.

On Tuesday, the company also disclosed for the first time that the new owners of the 118-year-old department store chain will turn over Penney's defined benefit pension plan to the federal program that insures it. Other retiree medical and life insurance benefits were also rejected under the sale agreement.

The move affects more than 52,000 current and future retirees who are vested in the plan.

At the end of last year, the plan had $3.467 billion in assets, and its accumulated benefit obligation was $3.2 billion. Penney's defined benefit plan is fully funded and is insured by the Pension Benefit Guaranty Corp., which will assume the plan's assets and the responsibility for paying benefits to retirees.

The federally chartered guaranty corporation has caps on monthly pension payouts, but it's not clear based on various formulas how the Penney monthly pension will be affected. Some formerly highly paid executives could see a reduction in their monthly pension checks.

The plan rejection was not a big surprise, but it's one more area of concern for Penney retirees and employees. Penney had lucrative retirement benefits, including supplemental plans that aren't insured by the corporation. Current and former employees have filed claims with the bankruptcy court over those uninsured retirement funds.

Separately, 160 stores and six distribution centers that Penney owns are going to its secured lenders led by H/2 Capital. Another group of debt-holders led by Aurelius Capital Management also may be making a bid for those real estate assets.

Penney will lease back the 160 stores and six distribution centers in what the U.S. Bankruptcy Judge David Jones referred to as "one of the longest, most complex lease agreements known to man."

The court has scheduled a confirmation hearing for two days before Thanksgiving on Nov. 24.

Information for this article was contributed by staff members of The Associated Press and by Maria Halkias of The Dallas Morning News.