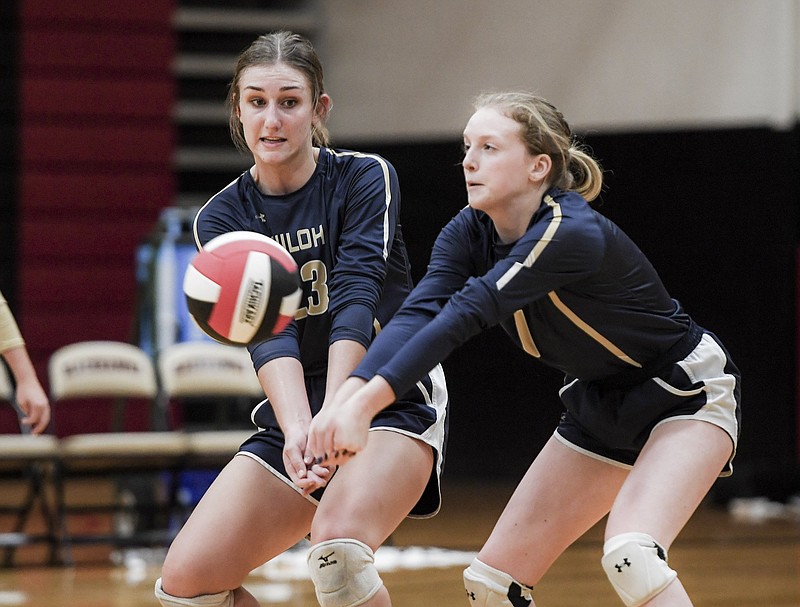 SPRINGDALE -- Shiloh Christian was minus three starters on Wednesday night, but the Lady Saints still moved on to the 4A-Northwest Conference volleyball tournament finals with a big assist from Savvy Williams.

Williams, playing in her first high school varsity match of the season, put Farmington back on its heels early with a hard driving serve and helped the Lady Saints put it away late with the 25-11, 25-15, 26-24 semifinal victory.

The 5-foot-2 freshman got Shiloh Christian started, serving up the first eight points -- including three aces -- as the Lady Saints (19-2) jumped to a 15-1 lead in the opening set and never trailed in the first two sets.

Farmington (9-9) pushed back in the third set and even led 24-22. But a pair of kills by sophomore Rylee Kallesen, including the clincher, helped the Lady Saints score four straight and close out the match.

The Lady Saints will play host to second-seeded Harrison in the tournament finals at 6 p.m. tonight.

Shiloh Christian coach Nathan Bodenstein couldn't have been prouder of how his team performed under the circumstances.

"I thought we came together and did a great job minus three starters," Bodenstein said. "Savvy was playing in her first varsity match. She had six aces and we had 20 points off her serve. Avery Porter stepped up like a senior should."

Bodenstein said starters Rylee Odell, Emerson Traweek and Ryan Russell all did not play because of a coach's decision. But they will all be available for tonight's tournament finals, he said.

Farmington coach Greg Pair said his team started slow after a big win over Berryville on Tuesday that punched its ticket for next week's state tournament. The Lady Cardinals had lost two earlier meetings to Berryville during the regular season.

"They came out and punched us in the mouth pretty good there," Pair said. "You don't want to have that hangover. Granted Shiloh is a very good team and they are well coached, but we just didn't play the way we're capable."

Farmington will travel to Pea Ridge tonight to play in the third-place match.

Reese Ricketts hammered 10 kills and Olivia Ditmanson added seven to lead the Lady Goblins into tonight's 4A-Northwest tournament finals with a 25-12, 25-18, 25-23 win over the Lady Blackhawks.

Bentonville will travel to Springdale Har-Ber for the third-place match tonight. Rogers High will also host Bentonville West in the fifth-place match.

Southside (14-2) trailed 2-1 after three sets and 10-5 in the fifth set, but clawed back to take the final set and match. It was the second time in eight days the Mavericks defeated the Lady Wildcats (8-4) in five sets.

Mississippi State commit Avery Fitzgerald put together a double-double with 23 kills and 11 digs to go with four aces for Southside. Arkansas commit Hannah Hogue dished out 49 assists, while Toree Tiffee also had a big night with 18 kills and nine digs.