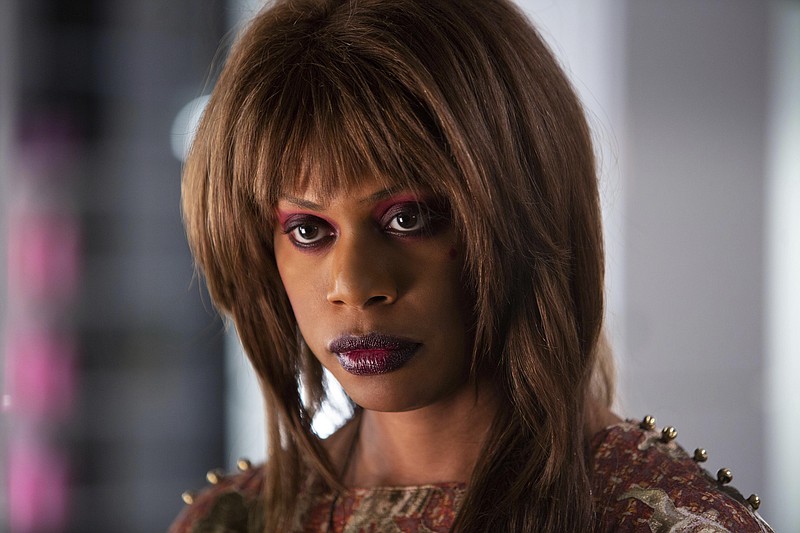 Laverne Cox stars in “Bad Hair,” a comedy-horror about woman trying to rise in the late-80s music business who gets a demonic weave. The film premieres Friday on Hulu. (Hulu via AP/Tobin Yellan)

Here's a collection curated by The Associated Press' entertainment journalists of what's arriving on TV, streaming services and music platforms this week.

◼️ You have to admire the moxie of Netflix and director Ben Wheatley for taking on Daphne du Maurier's "Rebecca," which already has a masterpiece Alfred Hitchcock adaptation to its name. But even with the less than stellar reviews, the prospect of watching stunners Lily James and Armie Hammer fret around Manderley in period clothes is still just too alluring to deny. And if "Rebecca" doesn't satisfy the need for voyeuristic beauty, the streamer is also getting Todd Haynes' "Carol" back in its ranks today.

◼️ Following his critically acclaimed turn as activist Abbie Hoffman in Aaron Sorkin's "The Trial of the Chicago 7," Sacha Baron Cohen is returning to the mockumentary character Borat. The Kazakhstani television host is back with "Borat 2" or "Borat Subsequent Moviefilm: Delivery of Prodigious Bribe to American Regime for Make Benefit Once Glorious Nation of Kazakhstan." The film is being kept mostly secret until it hits Amazon Prime Video premiere Friday, but we can expect some election and pandemic antics.

◼️ "Dear White People" filmmaker Justin Simien takes a big swing with his latest, "Bad Hair," a comedy-horror about woman trying to rise in the late-80s music business who gets a demonic weave. Critics have been mixed on the tonal mishmash, but you can decide for yourself when it hits Hulu on Friday.

◼️ "Emma": Autumn de Wilde's enjoyable adaptation of Jane Austen's "Emma" got a little lost in the early days of the pandemic, in theaters for about a week before jettisoning to VOD amid the shutdown. But it's finally coming to HBO on Saturday. Edgier than the (also great) Gwyneth Paltrow version, Anya Taylor-Joy takes on the role of the matchmaker extraordinaire this time.

◼️ Recorded at his home studio in New Jersey, rock legend Bruce Springsteen will release his 20th album on Friday. "Letter to You" reunites Springsteen with the E Street Band and includes 12 tracks, including three The Boss, 71, wrote in his early 20s: "Janey Needs a Shooter," "If I Was the Priest" and "Song for Orphans." The album was recorded in just five days and that portion was filmed — fans will get to see Springsteen and his bandmates do what they do best in the Apple TV+ documentary film "Bruce Springsteen's Letter to You," which also premieres Friday.

◼️ Billie Eilish was on the road for just three days before she had to cancel her worldwide tour due to the coronavirus pandemic in March. But thankfully on Saturday, the Grammy-winning star will host her first global livestream concert. "Where Do We Go? The Livestream" will be available on Eilish's website as well as the interactive video streaming platform Maestro. It will air live from Los Angeles at 5 p.m. and tickets cost $30.

◼️ "The Queen's Gambit," based on Walter Tevis' 1983 novel of the same name, follows a chess prodigy who competes in a male-dominated realm as she battles her scarred past and present. Orphaned Beth, played as a young woman by Anya Taylor-Joy, finds solace in the game and escape in the substance abuse that could undermine her life and dazzling success. Annabeth Kelly, who plays Beth as a child, Marielle Heller and Thomas Brodie-Sangster co-star in the series directed and written by two-time Oscar nominee Scott Frank ("Out of Sight," "Logan"). It debuts Friday on Netflix.

◼️ HBO's "The Undoing" boasts A-list talent in front of and behind the camera. Nicole Kidman and Hugh Grant star, David E. Kelley ("Big Little Lies") is the writer and Susanne Bier ("The Night Manager") directs the limited series debuting 8 p.m. Sunday. Grace and Jonathan (Kidman, Grant) have a charmed family life until it's revealed to be otherwise, forcing Grace to switch into crisis mode. Donald Sutherland, Edgar Ramirez and Noah Jupe also star in the adaptation of Jean Hanff Korelitz's 2014 novel, "You Should Have Known."

◼️ Eva Longoria, Gloria Estefan and Ricky Martin host a celebration of Hispanic culture airing 8 p.m. Monday on CBS and streaming on CBS All Access. "Essential Heroes: A Momento Latino Event" uses music, comedy, short documentaries and celebrity appearances to explore the Latino experience. While essential workers, Latinos among them, have drawn praise for their efforts during the pandemic, Latinos have "been the backbone of this country for hundreds of years" and deserve recognition, Longoria said. Momento Latino is a coalition of advocates for the community.