Ribbing by UA gets Kiffin nod 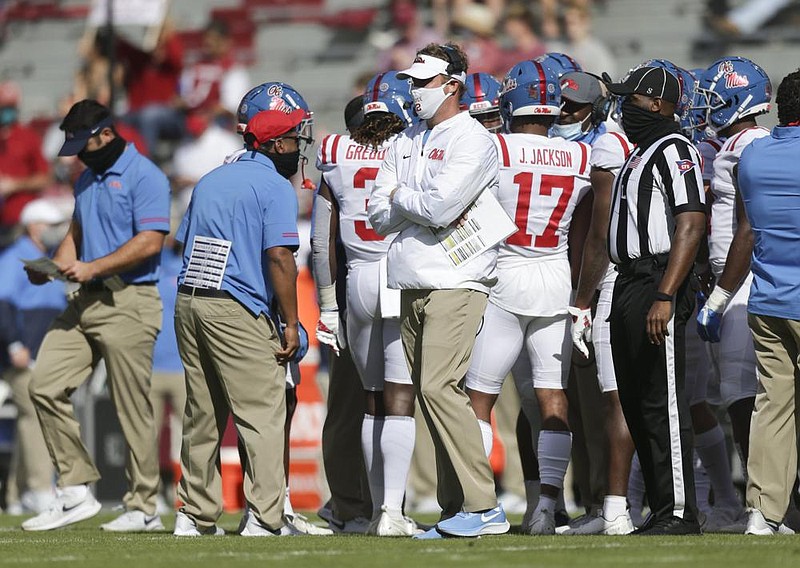 Ole Miss Coach Lane Kiffin instructs a receiver during the Rebels’ loss at Arkansas on Saturday. Kiffin took ribbing he received from the Razorbacks’ Twitter account in stride after Arkansas’ victory over his team. (NWA Democrat-Gazette/Charlie Kaijo)

2(2);Georgia;3-1;Bulldogs lose another lead against Alabama

3(3);Texas A&M3-1;Aggies have open date to get ready for Razorbacks

Jones will guide Alabama against Tennessee as the SEC's leader in total offense, averaging 375.2 yards. He has completed 90 of 115 passes for 1,518 yards and 12 touchdowns with 2 interceptions.

There hasn't been a noticeable drop-off in quarterback production with Jones after the loss of Tua Tagovailoa, the No. 5 overall pick in the NFL Draft by Miami.

CBS is showing the Alabama-Tennessee game, but the Crimson Tide are favored by 20 points. It will be another case of Alabama Coach Nick Saban beating one of his former assistants for the millionth time.

Auburn is a 4-point favorite against Ole Miss in what should be a much more intriguing game.

The heat on Tigers Coach Gus Malzahn and offensive coordinator Chad Morris already has been turned up after a lopsided loss to Georgia, controversial victory over Arkansas and a loss at South Carolina.

Auburn desperately needs to beat Ole Miss to get its season turned around, while the Rebels will try to bounce back from a loss at Arkansas in which quarterback Matt Corral threw six interceptions.

$830,000 -- Buyout owed to Jimmy Brumbaugh, who was fired as Tennessee's defensive line coach by Jeremy Pruitt four games into this season. Brumbaugh had a two-year contract worth $650,000 annually.

22-0 -- Alabama Coach Nick Saban's record against coaches who were his former assistants. He'll look to stay perfect against Tennessee's Jeremy Pruitt on Saturday.

72.2 -- Yards Georgia is being penalized per game.

– LSU Coach Ed Orgeron on what quarterback Myles Brennan has been doing this week with an injury to his abdomen.

"This is probably the best Alabama offense I've ever seen since I've been alive."

"We didn't play our best game, but we played our best opponent."

Ole Miss Coach Lane Kiffin didn't get upset when the University of Arkansas football program's Twitter account had some fun at his expense after the Razorbacks beat the Rebels 33-21 last week.

The Arkansas football account on Saturday night tweeted a video of a toy train -- with an Ole Miss mask on the front like the one Kiffin wears -- going off the tracks in reference to the Razorbacks' defense forcing seven turnovers to derail "The Lane Train."

Kiffin also responded to a tweet by the SEC Network after Arkansas Coach Sam Pittman said Monday on the radio show "SEC This Morning" that redshirt freshman walk-on cornerback Hudson Clark will be placed on scholarship in January after he had three interceptions against Ole Miss.

"Happy we can help kids out @RazorbackFB congrats!!!" Kiffin tweeted.

Kiffin's good-humored responses to the Arkansas tweets aren't what you'd expect from a coach after a tough loss.

"I don't think like a lot of coaches, as I think you probably know," Kiffin said Wednesday on the SEC coaches teleconference. "I just think you should be real. What would you do if you weren't a coach if you saw something neat like [the train video]?

"I joke about things on Twitter, so if you dish it out, you'd better be able to take it. I thought it was pretty funny what they did with the train and the mask."

Kiffin said he truly is happy Clark earned a scholarship.

"I thought that was just a really cool story for the kid," Kiffin said. "I know most coaches would be too pissed about the game, but the kid played a great game, did a great job and got a scholarship. That's pretty neat."

LSU is taking away eight scholarships over a two-year period and reducing recruiting visits, evaluations and communication as self-imposed penalties because of booster payments to a player's father, Sports illustrated reported on Wednesday, citing unnamed sources.

Cleveland Browns receiver Odell Beckham, a former LSU star, also is being banned from the Tigers' facilities after he distributed $2,000 in $100 bills on the field after the Tigers' beat Clemson in the College Football Playoff title game last season, according to the report.

Robert Munson, LSU's senior associate athletic director, said in the statement to Sports Illustrated that LSU officials worked in cooperation with the NCAA to identify and self-report violations within the football program, and that they believe the sanctions are appropriate.

Florida Coach Dan Mullen called into the SEC coaches teleconference Wednesday from his house, where for now he's limited to his bedroom and adjoining office.

Mullen announced Saturday he tested positive for covid-19, so he's quarantining at home.

"I'm doing fine, but I'm isolated and staying away from my family," Mullen said. "My wife had to move out of the bedroom unfortunately for her."

Mullen said his wife, Megan, and the couple's two children are well.

"They're healthy," he said. "They've had multiple negative tests."

The SEC announced Oct. 14 that Florida's home game scheduled against LSU for last Saturday was being postponed to Dec. 12 after the Gators had more than 20 players test positive for covid-19.

"The majority of our guys had very minor symptoms," Mullen said.

As a precaution, Florida shut down all football activities Oct. 13 and plans to resume Monday. Florida's game at Missouri scheduled for Saturday has been moved to Oct. 31.

South Carolina Coach Will Muschamp said the Gamecocks do the best they can to social distance on the team plane, in the hotel and on buses when they play on the road. But South Carolina and other road teams can't do anything about cramped visiting locker rooms.

"Some of the visitors' locker rooms are not exactly the finest accommodations in the country," Muschamp said on Wednesday's SEC coaches teleconference. "Maybe we ought to look at that as a league and actually have a little bit better situation to walk into.

"And the one we're going to this weekend [at LSU] ain't worth a d*, either. But they're not really about how the visitors are.

"Our visitors' locker room here actually is really nice. You can spread out and have you a nice time."

The Crimson Tide will look to make it 29 in a row over the East when they play at Tennessee, a team they've beaten 13 consecutive years.

Alabama Coach Nick Saban is 15-1 against the Vols, including 2-1 when he was at LSU.

Texas A&M, like Arkansas, has an open date Saturday before the teams play Oct. 31 in College Station, Texas.

Aggies Coach Jimbo Fisher said the team is working on preparations for Arkansas as well as spending time on fundamentals.

"We have some sessions set for Arkansas, some other teams we play in the league [later this season] that we have already broken down, and things we had from last year that we know there's a couple issues we want to introduce to our players so when game week comes," Fisher said, "it makes them aware of what we do."

Texas A&M (3-1) has won its past two games against Florida and at Mississippi State since losing at Alabama.

"We were starting to play well and it's good to keep playing, but it's also not bad to regroup," Fisher said. "It's how you take it and how you come back out and play.

"I mean, I have concerns sometimes, 'Do we need a break when we get momentum?' That's the hand you're dealt and the situation you're in and you have to do it."

Brennan hasn't been able to practice since suffering a torn muscle in his abdomen in LSU's 45-41 loss at Missouri on Oct. 10.

"We don't think that Myles Brennan is going to be able to play," Orgeron said Wednesday on the SEC coaches teleconference. "He's still not 100% yet. He's very questionable."

Orgeron said true freshmen quarterbacks TJ Finley and Max Johnson are splitting first-team reps this week. Neither has played in a game yet.

"TJ and Max have looked very good in practice," he said. "We'll make a decision at the end of the week."

"I'm not saying he won't," Orgeron said. "Some miraculous thing may come up. But for right now, we're planning on going with either TJ or Max."

Missouri Coach Eliah Drinkwitz said that in the last week his staff has prepared for three different opponents.

On Oct. 12, the Missouri-Vanderbilt game scheduled for Saturday was postponed because the Commodores didn't have enough players available due to covid-19 positive tests.

Drinkwitz said the Missouri staff was putting the finishing touches on its game plan for Vanderbilt, but then began preparing for Florida. Then the Missouri-Florida game scheduled for Saturday was postponed because of a covid-19 outbreak among the Gators.

Last Friday, the SEC announced it was moving Missouri's game against Kentucky scheduled for Oct. 31 to Saturday.

"We really had to shift our mindset three different times," Drinkwitz said. "Fortunately for us, we never installed any of those plans with our players. It's like I've told our staff, we have to be flexible."

Missouri is now scheduled to play Florida on Oct. 31 and Vanderbilt on Dec. 12.

"We're going to play all those opponents," Drinkwitz said of the games against Vanderbilt, Kentucky and Florida being moved around. "So it's never wasted work."

The Vols have scored just seven points over the past six quarters in losing to Georgia 44-21 and Kentucky 34-7, but Tennessee Coach Jeremy Pruitt decided defensive line was his team's biggest problem.

Word leaked Sunday that Brumbaugh, who was at Kentucky, Maryland and Colorado the previous seven season, had been fired.

Pruitt confirmed the news Monday at his weekly news conference.

"Coach Brumbaugh has done a really nice job for us," Pruitt said. "He worked his tail off. Sometimes from a philosophical standpoint, things are just not a fit and it just didn't work out for us."

Pruitt, a former defensive coordinator at Georgia and Alabama, said he will now coach the defensive line.

"If it's not working out, it's better to just do it right now," Pruitt said when asked about the timing of firing Brumbaugh. "Jimmy and I had a really good conversation. Unfortunately, probably because of the covid-19 circumstances, when you're a new coach and you don't have a chance to be around your players in March, April and May and then a limited amount in June, it puts you at a disadvantage.

"This is no knock on Jimmy as a coach whatsoever. He is one of the most knowledgeable guys I've been around and he'll do a good job wherever he goes. It's just something that I felt like we needed to do and we did it."