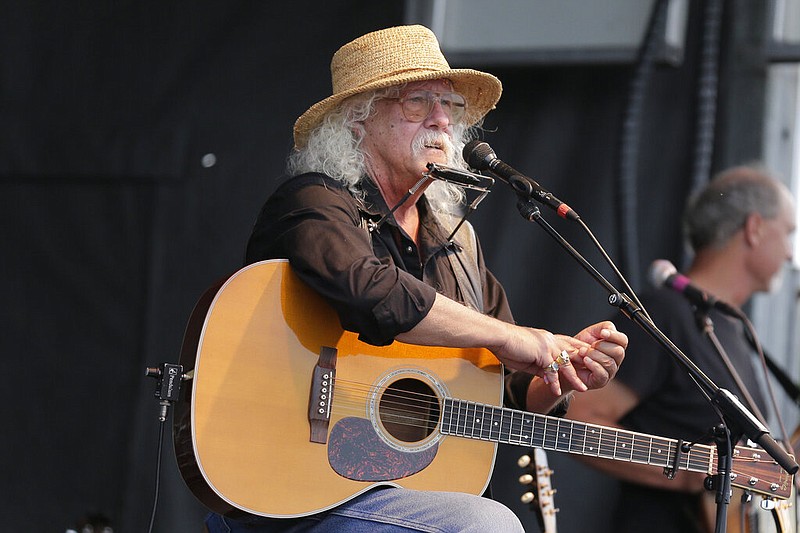 Arlo Guthrie talks during a concert at a Woodstock 50th anniversary event in Bethel, N.Y., in this Aug. 15, 2019, file photo. The 73-year-old folksinger announced Friday, Oct. 23, 2020, that he is retiring from performing, effective immediately. (AP / Seth Wenig )

LOS ANGELES — You can get anything you want at Alice’s Restaurant. But it appears we’ve seen Arlo Guthrie tell us that in person for the last time.

In lengthy posts on his Facebook page and website, the 73-year-old folksinger announced Friday he is retiring from performance immediately. He’s canceled numerous shows he had planned around the country for the next year and said he won’t be booking any more.

“It’s been a great 50-plus years of being a working entertainer, but I reached the difficult decision that touring and stage shows are no longer possible,” he said in the statement titled “Gone Fishing.”

Guthrie did not respond to email and phone messages asking to elaborate, but he indicated in his statement that health issues played a major role. He said he’d suffered two strokes in recent years, including a serious one that hospitalized him for several days last year.

The son of folk music legend Woody Guthrie rose to overnight fame in 1967 with the release of “Alice’s Restaurant Massacree,” a hilarious 18-minute talking blues ballad about how his Thanksgiving Day 1965 arrest for littering kept him out of the Army during the Vietnam War.

As he finger-picked a maddeningly memorable tune over and over on his acoustic guitar, Guthrie related how he’d mocked the local police chief who arrested him, appeared before a blind judge who couldn’t see the photos submitted as evidence against him and berated his draft board for concluding he “wasn’t moral enough to join the Army and burn women and kids’ houses and villages after being a litterbug.”

He’s gone on to record more than 30 albums, write several children’s books and occasionally appear in television shows and films, including playing himself in the 1969 movie “Alice’s Restaurant.”

“A folk singer’s shelf life may be a lot longer than a dancer or an athlete, but at some point, unless you’re incredibly fortunate or just plain whacko (either one or both) it’s time to hang up the ‘Gone Fishing’ sign,” he wrote Friday.

Guthrie, who frequently declined to play “Alice’s Restaurant Massacree” for audiences over the years, had planned to perform it at next year’s shows. He had played it at New York’s Carnegie Hall in 2019 at what he’d previously announced would be the last of his 50 Thanksgiving weekend shows at that venerated music hall.

But the day before, ironically on Thanksgiving, he suffered the second and more severe of his strokes. Two days later he was in the hospital and later underwent several days of physical rehabilitation.

By the next year, he was back on his feet and back on tour when the coronavirus pandemic struck. He estimated Friday he’d recovered about 80 percent of his health by then, but after months of idleness from the road, he decided it was time to stop.

In July he released a new song, Stephen Foster’s “Hard Times Come Again No More,” and indicated Friday that his retiring from the stage doesn’t mean he’ll go away completely.

“In fact, I hope to be a thorn in the side of a new [presidential] administration pretty soon,” he said.