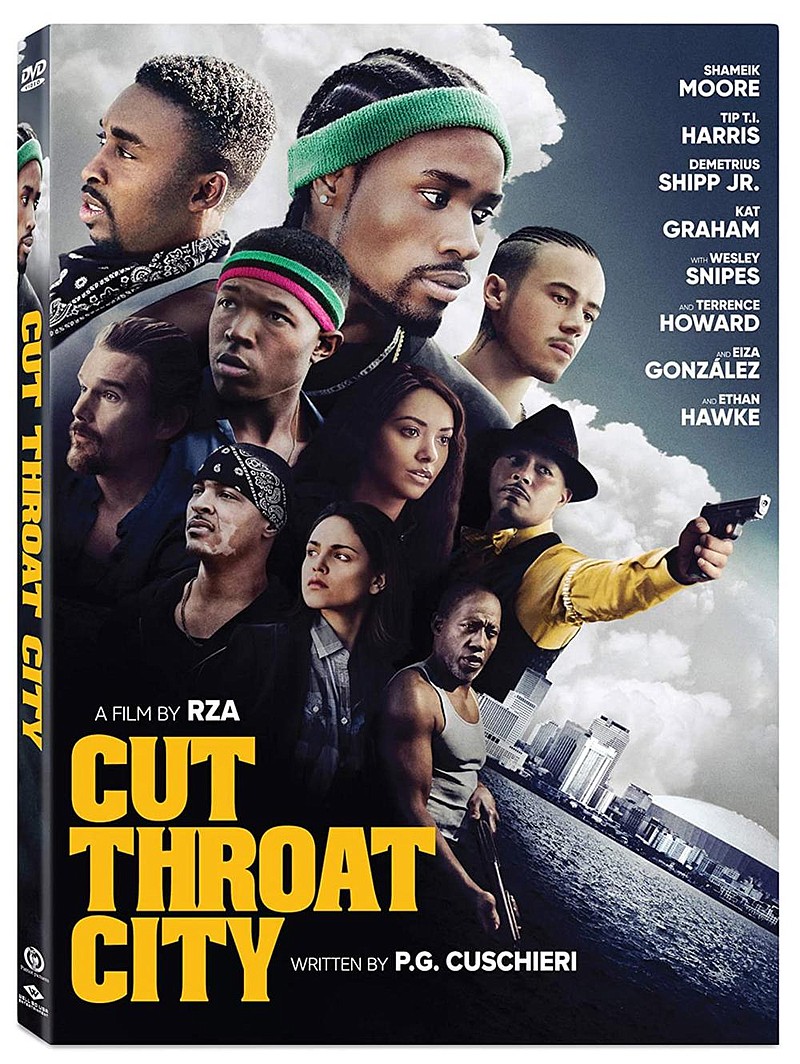 Some movies can be filmed anywhere against an anonymous suburban strip-mall backdrop. Not this one.

There’s nothing that quite resembles the Lower Ninth Ward of New Orleans, where the action of “Cut Throat City” takes place. And the time period — it’s set in the terrible days after Hurricane Katrina — is well suited to a gangster heist actioner that has much to say about racism, inequality, government bumbling and political corruption.

Although the plot has too many elements spinning off in all sorts of directions to be truly coherent, and the backdrop deserves a bigger role than it’s given, the big-time cast is worth the audience’s focus. With Wesley Snipes, Ethan Hawke, Shameik Moore, Terrence Howard, Isaiah Washington, Eiza González; directed by the Wu-Tang Clan’s RZA.

(not rated, 1 hour, 38 minutes) This engagingly realistic and intermittently scary sequel to 2007 cult favorite “Black Water” focuses on five friends who, while exploring a remote cave system in Northern Australia, encounter a hungry crocodile. And a downpour is threatening to flood the cave. Now what? With Jessica McNamee, Luke Mitchell, Amali Golden; directed by Andrew Traucki.

“Fishbowl” (not rated, 1 hour, 25 minutes) An indie thriller set in a small town where three school-age sisters are forced to cling to one another in the wake of their mother’s death and their damaged father’s increasing obsession with

The Rapture he believes is imminent. With Khali Addair, Ken Arnold, Mackenzie Astin; directed by Alexa and Stephen Kinigopoulos.

“The Owners” (not rated, 1 hour, 32 minutes) A gruesome they-had-it-comin’ horror-thriller in which three young thug friends plan to invade a luxurious mansion with a safe full of cash in the basement. But when the owners, an elderly couple, come home in the midst of the attempted heist, the tables are suddenly turned. With Maisie Williams, Sylvester McCoy, Rita Tushingham; co-written and directed by Julius Berg.

“The Secrets We Keep” (R, 1 hour, 37 minutes) In post-World War II America, a Roma woman (Noomi Rapace) who was brutally tortured and raped by Nazi soldier during the war believes she recognizes a neighbor (Joel Kinnaman) as one of those soldiers. So what to do?

It’s a quandary, but of course, she’s going to kidnap the man and tie him up in her basement while she tries to convince her husband (Chris Messina), who knows nothing of her wartime traumas, that she’s not crazy.

“Spree” (not rated, 1 hour, 33 minutes) An aggressive, sadistic found-footage social media satire (you’re either a fan or these, or you’re not) told via cellphone videos and CCTV street recordings in which a ride-share driver who, despite having nothing to offer, really, really wants to create an online following for himself, at any cost. With Joe Keery, Sasheer Zamata, David Arquette, Mischa Barton; directed by Eugene Kotlyarenko.

“Scare Package” (TVMA, 2 hours, 24 minutes) A comedic fantasy in which the owner of a creepy video store explains to an unsuspecting job applicant with graphic and gory tales the rules of the horror genre. With John Bloom, Diana Prince; directed by Austin Jennings.

“The Vanished” (not rated, 1 hour, 35 minutes) A cross-country family RV trip turns horrific when a 10-year-old girl disappears after an overnight stop in a park filled with odd characters, all of whom seem likely suspects. A solid middle-level cast with Thomas Jane, Anne Heche, Jason Patric, John D. Hickman and Peter Facinelli, who also directed.