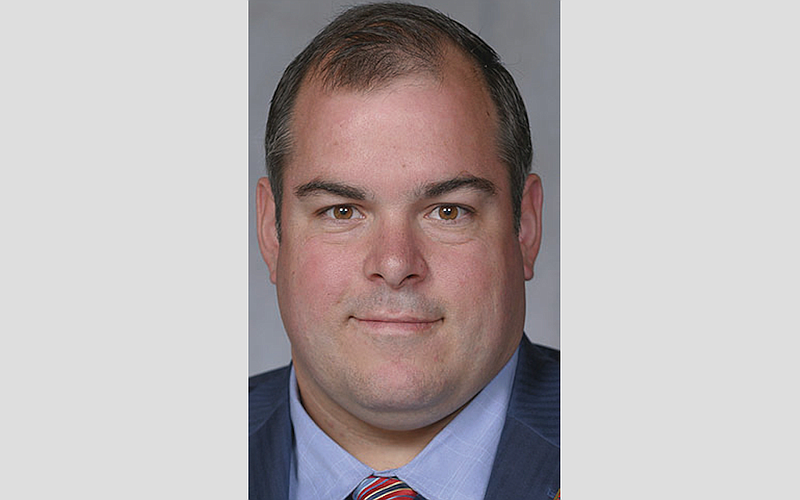 The story of Beckham having worn the Klan outfit was first reported earlier this week by the Arkansas Times, which spoke to five of Beckham's former classmates at the Mississippi School for Mathematics and Science.

When asked about the Arkansas Times report Tuesday, Beckham not only denied the allegations but assailed the people making them.

"First of all, I unequivocally denounce the KKK and any like minded hate group," Beckham said in an email to the Democrat-Gazette on Tuesday. "It is sad that the Democrats will do anything and say anything to try to win. The accusations that have been made about me are not only baseless and false, but disgusting."

On Wednesday, however, the Hinds County Circuit Court in Jackson provided records from a lawsuit Beckham's family filed after Beckham's dismissal. The records largely corroborate the Times' story.

Told Thursday that the Democrat-Gazette had obtained court records confirming the incident, Beckham repeated in an emailed statement that the allegations were "baseless and false," but then conceded to making "mistakes" as a teenager.

"I do sincerely apologize for any angst or grievances that I have caused anyone as a minor, as that is not the man that I am today," Beckham said. "I continue to unequivocally denounce the KKK and any like minded hate groups and the rumors that I am or have ever been part of the KKK are absolutely ridiculous. I am a Christian, a husband to my loving wife of 8 years as well as a father of two and am proud of the life that we have built in McNeil, Arkansas."

The Democrat-Gazette also spoke with eight of Beckham's former classmates -- including three quoted in the Times' story -- who said they witnessed the incident at the residential high school for gifted students in Columbus, Miss.

According to the court records and the former students, the incident occurred in October 2000 during Beckham's senior year.

Beckham, who was known as "Bubba" at the time, originally wore camouflage pants and a white T-shirt with fake blood on it for a Halloween costume contest hosted by the school, according to a written account by the Mississippi State Board of Education, which was later included in the court record.

After the costume contest, however, Beckham and two other students changed into Klan outfits to go trick-or-treating, according to the record.

"The costumes consisted of white bed sheets that were sewn into the form of robes with a patch on the chest area and pillowcases that were cut into hoods," the record stated. "The costumes were worn to school-sponsored Halloween activities that consisted of 'trick or treating' in the girls' dormitory."

"They weren't sheets. They looked to me to be real robes," said Haskel, who is white. "I remember seeing a Black classmate and the look of pain on his face."

Another senior at the school that year, Eric Seymour, recalled that school policy at the time largely forbade students from mingling in the dormitories of the opposite sex, but on Halloween, the rules were relaxed so that students could trick-or-treat around campus. That gave Beckham "unprecedented access" to the girls' dorm, where Seymour said he remembers seeing Beckham dressed as a Klansman, along with Black students who were "terrified in the moment."

"This was not just a prank, this was something that was very insidious and intentional," said Seymour, who is white.

Alana Nichols, a junior at the school that year who is Black, recalled being "petrified" as she watched the three youths dressed as Klansmen marching past her on their way to the girls' dormitory.

"When I think about memories of high school, this is at the forefront, and that's unfortunate," said Nichols, who now lives in Birmingham, Ala. "My initial thought was, 'What's going to happen? Am I going to die? Is there going to be a rally?'"

The record produced by the Mississippi State Board of Education also details the distress done to students, two of whom told the board that they witnessed their classmates "crying, shaking and even fearing for their safety."

According to the records, Beckham and the two other classmates wearing the KKK outfits were caught by school staff members and immediately given three days of in-school suspension. After further review, the school's director dismissed Beckham, a decision that was upheld by the Mississippi Board of Education.

The records do not say what happened to the other two students, but Beckham's classmates said they recalled those students returning to the school a short time later.

Beckham's family filed a notice of appeal to the Hinds County Circuit Court in January 2001. However, court records indicate that the family did not pursue the case much further.

A response from the Mississippi Board of Education to the lawsuit details the family's arguments during the administrative appeal of his dismissal.

"Bubba further contends that there was no physical or emotional harm caused by his actions," the record states. "There were several students testifying on behalf of Bubba that stated the costume worn by Bubba was in poor taste or immature, but they felt it was nothing more than a costume."

The lawsuit was dismissed by Circuit Judge W. Swan Yerger in November 2001.

Other records from the lawsuit state that Beckham returned home to Pascagoula, Miss., to complete high school. Beckham told the Democrat-Gazette last month that he graduated from Pascagoula High School before attending Mississippi State University.

When reached for comment Thursday, Maloch said he had read the Times' earlier story, "hoping that it wasn't true or that it was overblown."

"It's sad," Maloch said after viewing the corroborating information. "Character and integrity matter, I've been vetted by folks down here my entire life."

Megan Jourdan, another former classmate of Beckham's, said she was disappointed to read Thursday that Beckham had originally denied the incident.

URGED TO DROP OUT

In a news release Thursday, the Democratic Party of Arkansas called on Gov. Asa Hutchinson, U.S. Rep. Bruce Westerman of Hot Springs and the Republican Party of Arkansas to denounce Beckham and call on him to drop out of the race.

"This behavior was not a harmless prank," Democratic Party Chairman Michael John Gray said in a statement. "Further, when asked about it Beckham failed to express regret or even blame it on youthful stupidity. Instead, he vehemently denied it. This kind of behavior and failure to hold oneself accountable has no place in leadership. It certainly has no place in the Arkansas Senate."

Doyle Webb, the chairman of the Republican Party of Arkansas, released a statement Thursday condemning Beckham's actions after an earlier version of this article came out. Webb did not call on Beckham to drop out of the race.

Hutchinson also condemned Beckham's actions, but didn't suggest that he drop out of the race.

"20 years ago, while as a student in high school, Charles Beckham did something reprehensible and outright stupid. When inquiring about this matter Charles at first denied the allegations but has since admitted to the mistakes of his youth surrounding a Halloween party in 2000," Webb said in a statement. "Let me be clear, the Party of Lincoln & Rockefeller has no place for bigotry, intended as a joke or otherwise."

Safira McGrew, a junior at the school in 2000, said her former classmates began reconnecting earlier this year to discuss the nationwide protests after the death of George Floyd in Minnesota, and the conversation soon turned to the Halloween incident and Beckham's Senate campaign.

McGrew said she did not personally witness the incident. However, she remembered having to console friends who did, and the fear she felt afterward as a Black student on campus. She said she did not even tell her mother about the incident, for fear that she would be pulled out of school.

"It was very stressful," McGrew said. "I really did not know how to process it, I just felt stuck and very afraid."

After weighing whether to speak out, a few of the classmates said they began posting about their experience on the Beckham campaign's social media pages, only to have their comments promptly deleted. One told the Democrat-Gazette that they wished Beckham would drop out of the race, while others said they wanted Beckham to explain his actions to voters.

Nichols, Beckham's Black classmate who recalled feeling "petrified" at the sight of the Klan outfits, was asked Thursday what she would want to hear from Beckham if they met 20 years later. She said she did not wish to speak to him.

"He didn't look at me when he cowardly walked past me to go into the dorms," Nichols said. "And I wouldn't want him to look at me now either."