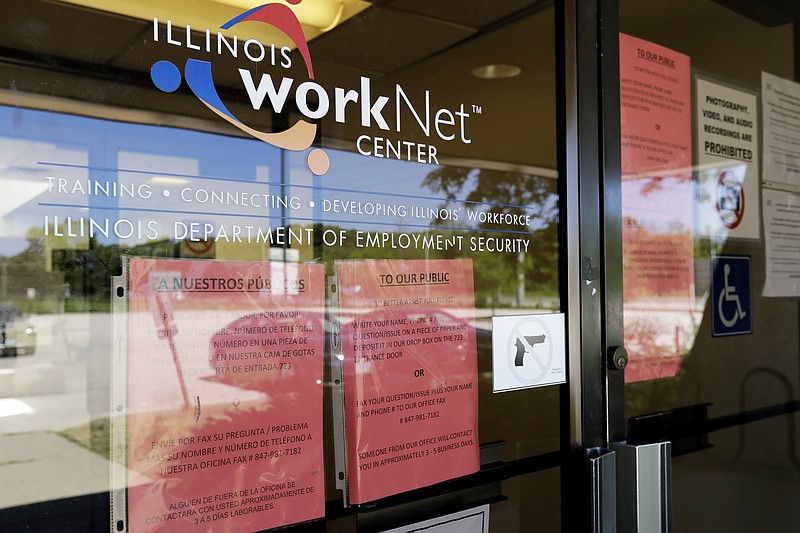 FILE - In this June 11, 2020, file photo, information signs are displayed at the closed Illinois Department of Employment Security WorkNet center in Arlington Heights, Ill. U.S. employers advertised for slightly fewer jobs in August while their hiring ticked up modestly. The Labor Department said Tuesday, Oct. 6, 2020, that the number of U.S. job postings on the last day of August dipped to 6.49 million, down from 6.70 million July. (AP Photo/Nam Y. Huh, File)

WASHINGTON -- The number of laid-off Americans seeking unemployment benefits fell last week to 787,000, a sign that job losses may have eased slightly but are still running at historically high levels.

Last week's figure was down from 842,000 the previous week, the Labor Department said Thursday. The government also revised down the number of people who sought aid in the two weeks before that. The revised total for the week that ended Oct. 3 was 767,000, the fewest since the viral pandemic surged in March, though still more than three times the levels that preceded the pandemic.

Economists welcomed the declines as evidence that the job market is still recovering from the pandemic recession. But some cautioned that the improvement could prove short-lived. With confirmed infections having neared 60,000 in the past week, the most since July, consumers have been unable or reluctant to shop, travel, dine out or congregate in crowds -- a trend that has led some employers to keep cutting jobs. Several states are reporting a record number of hospitalizations from the virus.

"We doubt it will continue as covid infections spread rapidly, pushing down demand for discretionary consumer services, especially in the hospitality sector," said Ian Shepherdson, chief economist at Pantheon Macroeconomics, referring to the portion of the economy that includes hard-hit hotels, restaurants and bars.

The downward revisions in applications for unemployment aid reflect a sharp decline in California, which in recent months has accounted for one-fourth of the nation's total jobless claims. California stopped processing new applications for two weeks while it implemented anti-fraud technology and sought to process a big backlog. The state's workforce agency is now reporting a 30% drop in the number of new applications compared with its earlier levels.

A drop that sharp suggests that the state's previous figures had overstated layoffs and jobless claims in California. Many economists have grown skeptical of the accuracy of the government's weekly figures.

That's because of fraud and the concern that some states may be double-counting applicants in their regular unemployment programs and in a new program that made contractors and gig workers eligible for jobless aid for the first time. In many states, contractors and gig workers must apply for aid under both the regular program and the new program to determine their eligibility.

Applications fell broadly last week across the country, not just in California, declining in 39 states while rising in 11. They dropped nearly 12,000 in Florida, 10,000 in New York and 5,800 in Washington state.

Thursday's report also said the number of people who are continuing to receive unemployment benefits tumbled by 1 million to 8.4 million. The decline shows that some of the unemployed are being recalled to their old jobs or are finding new ones. But it also indicates that many jobless Americans have used up their state unemployment aid -- which typically expires after six months -- and have transitioned to a federal extended benefits program that lasts an additional three months.

Many jobless recipients are now receiving only regular state unemployment payments because a federal weekly supplement of $300 has ended in nearly all states. And a $600-a-week federal benefit expired over the summer.

The still-elevated number of jobless claims underscores that a full recovery from the pandemic recession remains far off. Job growth has slowed for three straight months, leaving the economy still 10.7 million jobs short of its pre-pandemic level. The unemployment rate remains high at 7.9%.

And some major companies keep announcing layoffs. Aramark, a food services contractor that provides concessions at sports stadiums, said Wednesday that it would lay off 975 workers in Denver, most of whom worked at Coors Field, home of the Colorado Rockies. The company is also cutting 550 jobs in Kansas City. Most major league baseball games this season were played with limited or no crowds, thereby reducing the need for concession workers.

Amtrak said at a congressional hearing Wednesday that it would have to cut 2,400 jobs unless Congress approves emergency aid as part of another stimulus bill.

Negotiations in Congress over another round of financial aid have largely stalled, with little prospect for a deal before Election Day. Democratic House Speaker Nancy Pelosi and Treasury Secretary Steven Mnuchin are continuing to negotiate. But Republican Senate Majority Leader Mitch McConnell has warned the White House against agreeing to a large package that would be opposed by most Senate Republicans.

Unless Congress can agree on a significant new rescue aid program, most economists expect growth to slow in the final three months of the year from a rapid rebound in the July-September quarter. That would mean a more prolonged recovery of the jobs and output that the economy lost to the coronavirus.

Congress' failure to extend aid would also deepen the hardship for many of the jobless, who are struggling to pay bills with unemployment checks that, on average, replace just one-third of their previous earnings. Nearly one in six renters -- 11.8 million people -- are behind on their rent payments, according to an analysis of census data by the Center on Budget and Policy Priorities.

The number of people whose state benefits have expired and are now receiving aid for an additional 13 weeks from federal and state extended benefit programs rose 600,000 last week to 3.7 million, the government said.

An additional 345,000 people applied for jobless aid under the separate program that made the self-employed, contractors and gig workers eligible for unemployment benefits for the first time. Those figures aren't adjusted for seasonal trends, so they are reported separately.