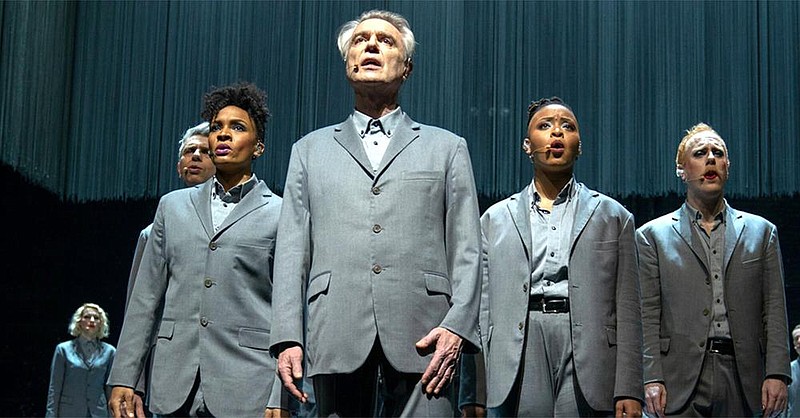 In this business, you ought to be careful with superlatives.

When people ask me what the "best" concert films are, I'll say it's a short list. Most rock concert films are meant as consolations or souvenirs, offering those who missed an experience a simulacrum, and those who caught it a chance to relive fond moments. However good a concert film is, it's not the same thing as the live experience.

Still, the short list would include Prince's "Sign O' The Times" (1987), Martin Scorsese's "The Last Waltz" (1977) and Sydney Pollack and Alan Elliott's "Amazing Grace" (2018). "Gimme Shelter" is a great film but it's not really a concert movie; Michael Wadleigh's "Woodstock" is an interesting time capsule, but a little short on visceral excitement. "Springsteen on Broadway" might qualify, though I'd rather just watch him in concert with the E-Street Band.

The best concert film is probably Jonathan Demme's "Stop Making Sense" (1984), if only because of its purity. It offers no behind-the-scenes pieces, interview segments or anything else that would disrupt the momentum of the music. It eschews special effects, MTV-style jump cuts and between-song banter. "Stop Making Sense" is 88 minutes of unadulterated music by the Talking Heads, augmented by guest musicians.

Like "Stop Making Sense," Spike Lee's film for HBO, "David Byrne's American Utopia," begins with Byrne alone on stage. He's sitting at a folding table, barefoot in a monochrome suit, holding a model of a human brain as he begins to sing his song "Here," the final cut on his 2018 album "American Utopia."

So right away we should understand that Lee's film is not exactly the film version of the theatrical presentation of Byrne's album, though the stage presentation did -- as Byrne tells us during the show -- grow out of the concert tour organized to support that album.

The "American Utopia" has a loose narrative about a disassociative creature searching for connection. (Byrne has acknowledged that it's somewhat autobiographical, though this is nothing like "Springsteen on Broadway.") While in "Stop Making Sense" Byrne performed, with the help of a boombox, the initial number "Psycho Killer" solo, here it's not long before he's joined on stage by two singing dancers, Tendayi Kuumba and Chris Giarmo, the latter in glinting silver eye shadow.

Kuumba and Giarmo each wear a variation of the suit Byrne is wearing, but the effect is not of a uniform but of a commonality. Soon the stage is busy with 11 musicians, tightly choreographed and banging drums or pressing keys or plucking strings. They are all individuals, all with their own brand of beauty, but they are also part of the machine.

You can wonder where such talent can be found -- they're all playing, dancing, singing at extraordinary levels -- but then you think, oh, this is Broadway, and talent is not scarce. Humans can do remarkable things, if they break it down step by step and practice. The choreographer Annie-B Parson has worked with these people for years, they have drilled and played these parts hundreds of times. They are doing what a focused community can do, and part of that is evolving.

So the show includes a number of familiar songs from the Talking Heads catalog -- "This Must Be the Place (Naïve Melody)," "I Zimbra," "Slippery People," "Once in a Lifetime," "Road to Nowhere" -- along with a stirring version of Janelle Monáe's protest song "Hell You Talmbout." (That the show was filmed in February, before the pandemic took root and before George Floyd was killed, feels eerie and discomfiting -- incontrovertible evidence that, yes, we did know there was something deeply wrong even before we were forced into house arrest.)

There's a touching earnestness about the show that's underlined by Byrne's occasional monologues, where he comes off as a cross between Jerzy Kosinski's Chance the Gardener and '70s comedian David Steinberg, TED-Talky little interludes that allow audience members (and probably more importantly, the musicians) a chance to catch their breath. If you know Byrne and the Talking Heads' music, you will hardly be surprised by the insistent poly-rhythmic beats or loopy lyrics hung on swoopy melodies, but you might be surprised by the sheer power and precision of Byrne's singing, which sounds -- feels -- of a better quality than the prep rock affectations of the early Talking Heads days.

Byrne, to hear his old bandmates (and why would they lie?) tell it, is not always an easy person to work with, and maybe he relates better to Sony Trinitrons or the light fixtures he takes for dance partners both here and in "Stop Making Sense." But I believe him when he tells us he's been working on himself as well as his dancing, that he understand he needs to get better.

Which might be the point of the stripped-down set, empty but for the band and their instruments (and though Byrne allows he has no problem with prerecorded tracks and playback, he insists they are playing every note onstage).

"Objectively, I could never figure out why looking at a person should be any more interesting than looking at any other thing," he says. "Like, say, a bicycle, or a beautiful sunset, or a nice bag of potato chips. But yeah, looking at people: That's the best."

At least it feels that way in this new normal where we stay six feet away from each other with our faces partially covered.

But Byrne was saying that back in February, and it sounds like he's trying to convince himself.

Luckily, as he says, we're not "fixed" in the sense that we haven't stop developing. We can still change, still repair some of those connections that were foreclosed to us early on. We can get better, we can transcend.

It might take some unlikely alliances, like Spike Lee and David Byrne and their collaborators, who together have made one of the two or three greatest concert movies ever.

Streaming on HBO and HBO Max