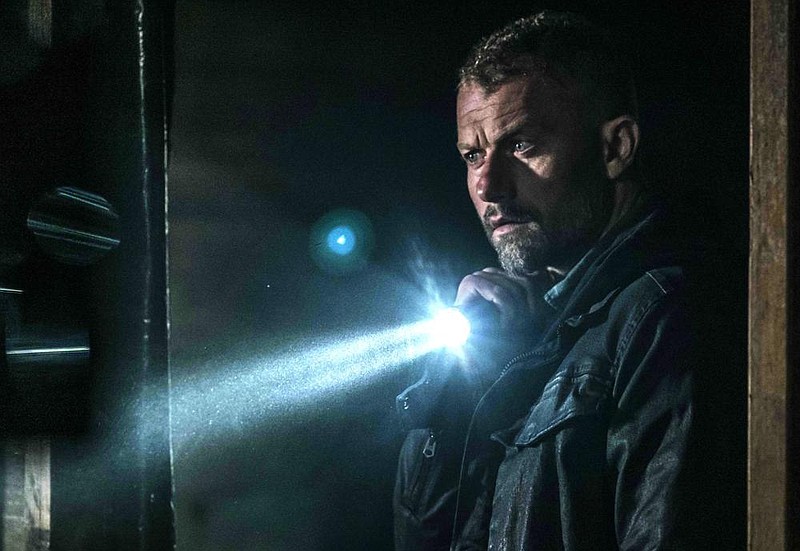 James Badge Dale is an ex-cop investigating the disappearance of a group of missing teenagers in “The Empty Man,” a film that looks like a typical spooky season horror movie.

I'd never heard the term "spooky season" applied to October before this year. But Halloween is coming up, though even before the pandemic the holiday seemed to be getting stale. At least it's not like when we were kids, when we ran wild in the streets with real knives and cherry bombs, demanding candy from strangers at the point of our rapiers, and bit deeply into our caramel apples without first checking for razor blades.

What October usually means to a movie critic is that "For Your Consideration" screeners are starting to arrive in the mail and budget horror movies are showing up in the cineplexes. But this being no ordinary year, no FYC screeners have arrived (and the critics' organization I belong to has pushed back voting on 2020's best films until February) and the only budget horror movie in sight is "The Empty Man," which has some potential. (Though it would have more potential if the producers provided us with the means to screen the film in advance.)

While horror is definitely not my thing, I know that some discriminating consumers of the genre were impressed by the graphic novels on which the film is based, and there are a couple of recognizable cast members (the always enjoyable Stephen Root and James Badge Dale).

Still, horror movies are -- in a normal year -- a consistent draw, and the lack of reviews (as of Wednesday morning, there were none on RottenTomatoes.com or Metacritic.com) is more indicative of the distributor's marketing strategy than its opinion of the movie's quality. Reviews can help independent dramas and arty foreign language movies, but hardcore horror fans probably don't need them to remind them of what's coming out.

And as far as influencing potential ticket buyers, reviews have about as much effect on potential audiences that editorial page endorsements have on political campaigns. Not very many people are going to be swayed by either one.

Still, there are reasons not to show your movie to critics; just look at what the meanies are doing to "After We Collided," opening theatrically in Arkansas today. In Variety, Jessica Kiang writes of the sequel to 2019's "After":

"'This is a story you've heard before,' drones the toneless opening voiceover, but we really haven't, because this is not a story. It is a numbingly repetitive series of manufactured minor dramas between two terminally self-involved, staggeringly uninteresting protagonists of the first film, which sets the bar so low it has to be the result of special effort that the sequel fails to clear it. 'After' is merely awful. 'After We Collided' is atrocious. Naturally, it's proving an enormous pandemic-era hit."

So far it's at 0% on the Rotten Tomatoes site. But to be fair, only a handful of reviews have been counted. But it will be someone's favorite movie.

Meanwhile, there's a concert film -- "Stevie Nicks 24 Karat Gold The Concert" -- in theaters tonight and Sunday night (go to stevienicksfilm.com for details) and it's pretty good. (I have it playing in a window on this laptop as I write this. The modern world is full of wonders.)

I've been watching a lot of music films recently -- I write about HBO's "David Byrne's American Utopia" elsewhere in this section, and in my Sunday Critical Mass column I write about Bruce Springsteen's "Letter to You" which starts streaming on Apple Music + today.

In the video OnFilm column, you can click on elsewhere in this section, I spend a lot of time talking about both those movies. Springsteen's is a valentine to his fans (and to his band and collaborators) and one's enjoyment of it might be directly proportionate to how much one has invested in Springsteen's music over the past 45 years.

On the other hand, "American Utopia" is a film anyone's great-grandmother might enjoy. It might even be better if you know absolutely nothing about David Byrne and his old band Talking Heads.

Also, note Borat is back this week. I've never been a fan but admire the audacity and courage of his creator, Sacha Baron Cohen. And a late entry, Werner Herzog's latest documentary, "Nomad: In the Footsteps of Bruce Chatwin," about the British novelist and travel writer -- a close friend of Herzog's who died in 1989 -- makes its debut on the usual video-on-demand streaming sites on Oct. 27.