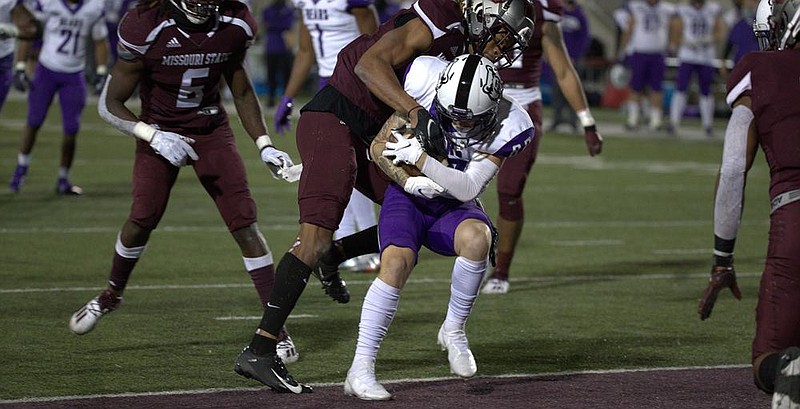 Mitchell Perkinson, here making a touchdown reception in the second quarter Saturday against Missouri State, was a secondary receiver who stepped up to help the Bears pull out a 33-24 victory. (Photo courtesy University of Central Arkansas)

There was no panic on the faces of the University of Central Arkansas players when big-play wide receiver Lujuan Winningham was ejected from last week's game at Missouri State.

The Bears have been there before – just not under those circumstances.

UCA adjusted and got a lift from other wideouts that opened the door for a road victory. Yet, that win may not have been possible if not for the contributions the Bears got from secondary targets Mitchell Perkinson and Tobias Enlow.

The two combined to catch 10 of quarterback Breylin Smith's 18 completions, with Perkinson also hauling in a touchdown pass in the second quarter. Their output didn't catch UCA Coach Nathan Brown off guard, though. According to him, the pair is taught to stay prepared.

"Regardless of the position, that's the way we coach our guys," he said. "When your number is called, take advantage of it. It's your job to not look back when you get that opportunity. I think that's what Mitchell Perkinson has done, and I think that's what Tobias Enlow has done.

"The bottom line, though, is that both of those guys have had really good receivers ahead of them in the depth chart. But they're still able to go out and get the job done, and they did that when we absolutely needed them to last week."

Perkinson's and Enlow's production was even more noteworthy because of the position the Bears were in.

UCA (3-3) was already without backup wide receiver Jarrod Barnes, who'd caught 12 passes this season as well as their top three tight ends in Sam Camargo, Jack Short and Josh Nix. The Bears were even more shorthanded when Winningham was tossed late in the first quarter.

The junior, who averages 14.1 yards per reception and has a team-leading eight touchdown catches, was booted from the game for an unsportsmanlike flagrant personal foul for making contact with an official with less than three minutes to go in the quarter.

Winningham and Jeremy Webb, Missouri State's top defensive back, had been jawing with one another up until that point. Brown said afterward that his players occasionally let the back and forth with Missouri State get under their skins, which led to excessive penalties.

That ejection not only left a gaping hole in UCA's receiving unit, but it also allowed Missouri State to send extra help toward the Bears' leading pass-catcher Tyler Hudson. Perkinson said there was no hesitation in what his next step would be after Winningham's departure.

"When he was ejected, I kind of gathered the receivers together," he explained. "I told them it was just like last year when he got hurt, and [Hudson] and those other guys just stepped up. So we said we were going to do the same thing.

"Different guys stepped up for us, and we were able to come out with a win."

After Winningham went down in Week 8 last year with a season-ending broken arm, Hudson moved to the forefront and posted gaudy numbers that helped him ultimately earn Southland Conference Freshman of the Year honors. Winningham is back, but that's not to say Perkinson and Enlow, two guys who transferred to UCA after stints at Oklahoma State and Arkansas, respectively, won't continue to produce when they have to.

"We've got to stay ready," said Perkinson, whose 10-yard touchdown catch in the second quarter against Missouri State gave UCA a 17-14 lead. "We've got to have that next man up mentality so whenever our number is called, we're ready to go. We're tuned into the game regardless of what's happening or who's in there.

"As long as you keep that mindset, it's easy to make plays."

If injuries or other unfortunate events, like the one involving Winningham, continue to surface, UCA is going to need even more from those two over its final four games.

"If you at the depth chart of our wideouts to begin the season out with, three of the five top guys are out or injured," Brown said. "For Mitchell and Tobias to step up like they have. ... we knew they had talent, we knew they had ability. But to be consistent and to have Breylin's trust and rapport is huge.

"That helps us not skip a beat. We're going to have to continue to have big things come out of those two guys. People do key on Lujuan, and people do key on Tyler. That's going to be important for our other receivers to step up and keep making plays."

WHEN 2 p.m. Central on Saturday