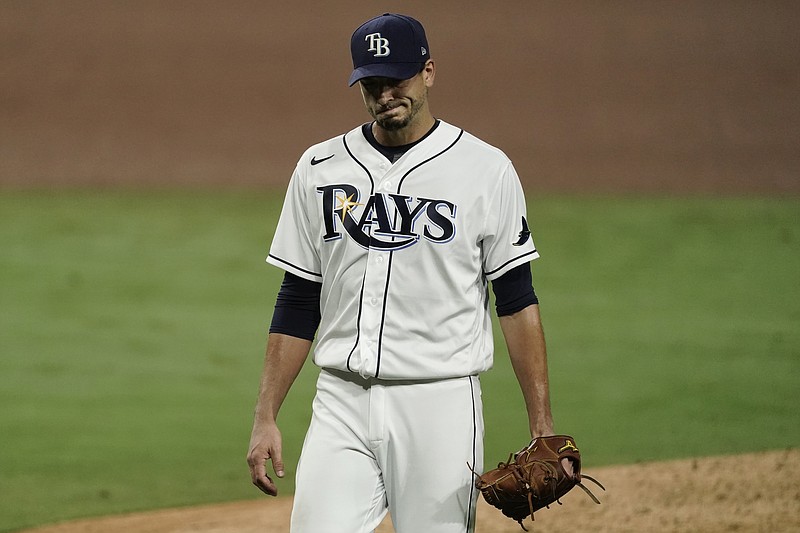 Tampa Bay Rays starting pitcher Charlie Morton walks off the mound after being relieved during the sixth inning in Game 7 of a baseball American League Championship Series against the Houston Astros, Saturday, Oct. 17, 2020, in San Diego. (AP Photo/Ashley Landis)

ARLINGTON, Texas -- Charlie Morton has slowly and quietly become one of the most dominant postseason pitchers ever.

He starts World Series Game 3 for the Tampa Bay Rays tonight with a chance to tie Orlando Hernandez's record of eight consecutive winning postseason decisions, according to the Elias Sports Bureau. By beating the Los Angeles Dodgers and winning his sixth consecutive postseason start, he would move within one of Bob Gibson's record.

How unlikely for a pitcher traded by Pittsburgh for a minor leaguer five years ago, a right-hander who turns 37 in three weeks and didn't make his first All-Star team until 2018,

"I do not wake up in the morning and say it's my time to shine. I would say that I wake up in the morning and I question if I've done what I was supposed to do to get ready for what I've been asked to do," Morton said. "I wake up with the humble recognition that what I'm about to do is an opportunity that not many people get to experience, and I try to prepare for it just like that."

Walker Buehler starts for the Dodgers, who won the opener 8-3 and were beaten 6-4 in Game 2. While there is no travel in the first neutral-site World Series, the teams had the day off, giving bullpens some recovery time.

Both teams decided against full workouts, though some players threw in Globe Life Field's outfield under the closed roof and a few pitched off mounds in the bullpens.

Morton beat Houston on Saturday in Game 7 of the AL Championship Series at San Diego, allowing two hits in 5 2/3 scoreless innings to become the first pitcher with victories in four winner-take-all games. He pitched Houston over the New York Yankees in Game 7 of the 2017 ALCS and the Dodgers in Game 7 of the 2017 World Series, then signed a $30 million, two-year contract with the Rays after the 2018 season and defeated Oakland in the 2019 AL wild card game.

"He's definitely a postseason stud," Rays Manager Kevin Cash said. "I think it's the approach, the demeanor that he takes. You don't see any difference. You don't see any anxiety. It's very much a been-there, done-that approach. And if you see anything, it's that he has a knack for finding that extra gear."

He was 46-71 through his first nine big league seasons with Atlanta, Pittsburgh and Philadelphia, overcoming Tommy John surgery in 2012 and hip operations in 2012 and 2015. He is 47-18 since.

Morton was limited to four starts in 2016 by a torn left hamstring, then signed a $14 million, two-year deal with Houston, which noticed his average sinker velocity had increased by about 2.5 mph to nearly 95 mph. The Astros encouraged him to increase fastball use from less than 5% to about 30%, and he went 29-10 with a 3.36 ERA for Houston and made the All-Star team twice. He entered Game 7 of the 2017 Series at the start of the sixth inning, struggled with his first four batters, then retired the final 11 Dodgers in order in a 5-1 win.

Morton's weakness during the regular season was tiring his third time through a batting order. Opponents' OPS against him increased from .710 the first time through the order this year to .744 the second to 1.006 the third. Cash pulled him after 66 pitches on Saturday.

"All season long it was a little bit of a struggle for Charlie to maintain his stuff deep in games," Cash said. "Through 70 pitches or whatever it was, the stuff never wavered. And that gives us a lot of reason to feel positive that he's going to be able to go out there and give us every opportunity to win."

Lanky and understated, Morton lives in Bradenton, Fla. He has talked about possibly retiring if the Rays decline his $15 million option for next season.

"They care about each other every single day," he said of the organization. "And if a team like that wants me back next year, I would be completely honored and privileged to continue to play. And needless to say, we live 40-something miles away from the Trop. Being out here in this bubble, yeah, I've grown to appreciate my situation even more with the Rays."

Buehler, pitching with a blister on his pitching hand that caused two trips to the injured list this year, has thrown more cutters of late to compensate. The 26-year-old right-hander is 1-0 with a 1.89 ERA in the postseason, striking out 29 and walking 11 in 19 innings. His demeanor is more laid back than that of Clayton Kershaw, his intense rotation mate.

"If he came in like Clayton on his start day, I'd be a little bit more concerned," Dodgers Manager Dave Roberts said. "Walker just kind of comes in and kind of ramps up his focus. But early on, he's just jovial."

Buehler said failure has taught him not to be so hard on himself. His only previous World Series start was in Game 3 two years ago, when he pitched two-hit ball for seven shutout innings only for Kenley Jansen to allow Jackie Bradley Jr.'s tying home run in the eighth. The Dodgers went on to an 18-inning victory, their only win in the Series against Boston.

"I think just kind of maturing a little bit as a person has for sure helped," he said, "understanding more that you can bounce back or you're not always going to be successful and learning from it instead of letting it kind of consume you." 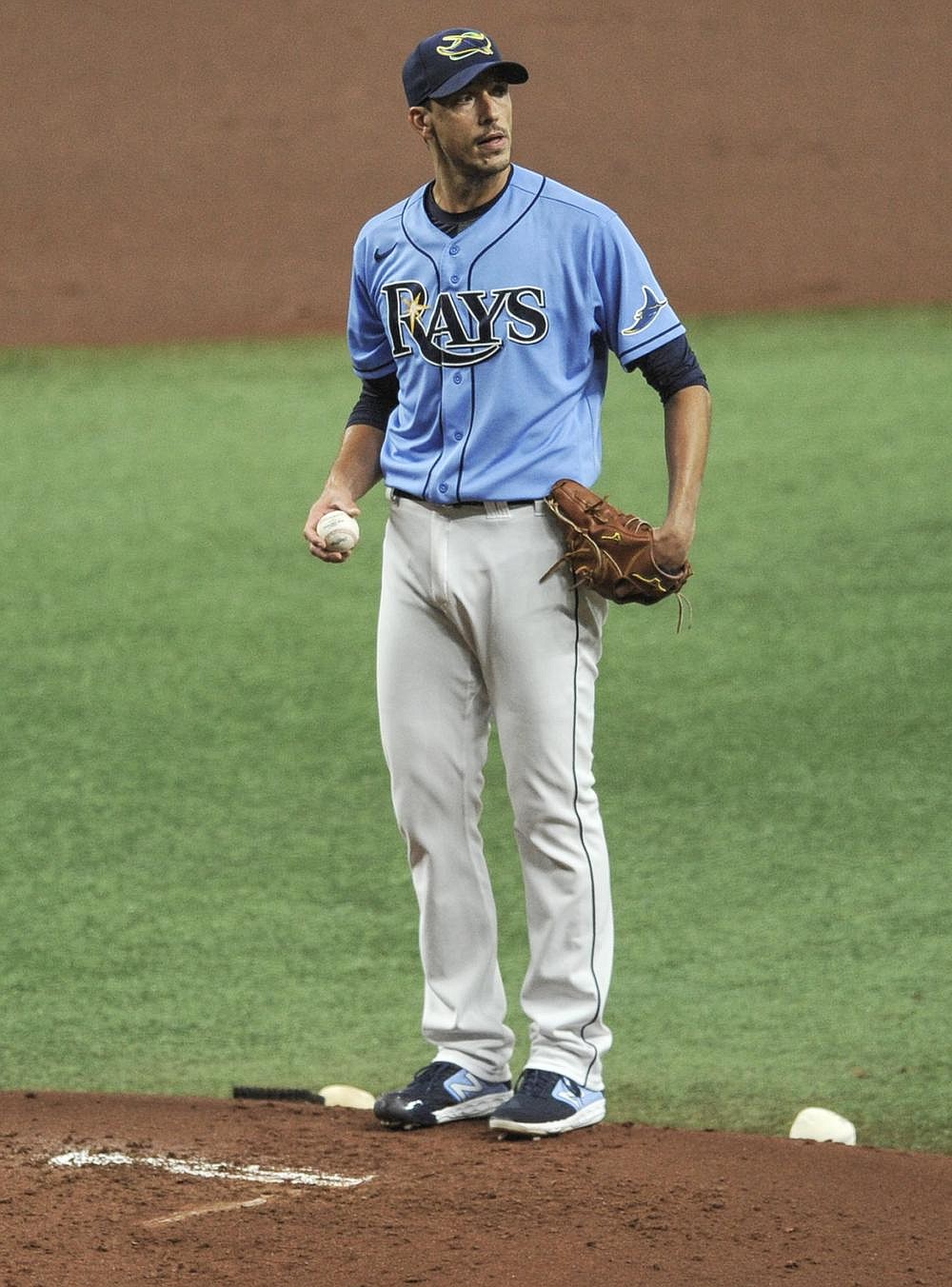 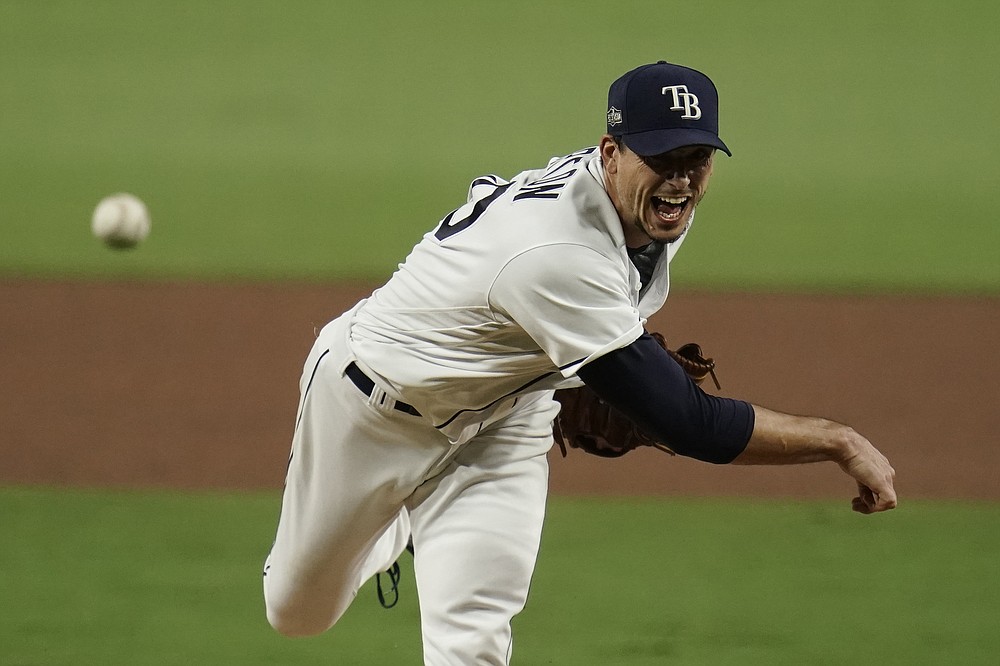 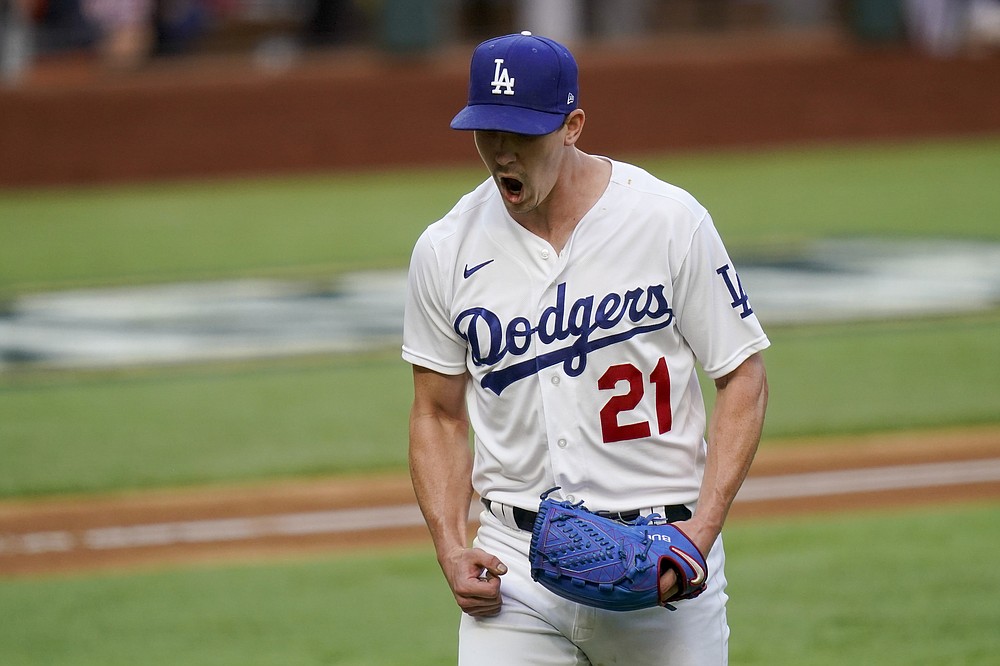 All games on Fox