Republican U.S. Rep. Bruce Westerman, the only congressman in the country with a graduate degree in forestry, has represented Arkansas' heavily wooded 4th Congressional District for three terms.

William Hanson, who returned to his native state last year after more than three decades in the West, is the Democratic nominee. A native of Camden, Hanson, 66, now lives in Hot Springs.

Westerman, 52, has sparked the White House's interest with his Trillion Trees Act, legislation calling for the U.S. to join in a worldwide tree-planting effort; the U.S. would aim to complete one-tenth of the task -- 100 billion trees -- over the next 30 years.

Since the U.S. already plants roughly 2.5 billion trees annually, the nation would need to increase its tree-planting by 800 million per year to meet the goal.

President Donald Trump touted the Trillion Trees initiative during his State of the Union address in February, and mentioned it during both presidential debates.

"It's kind of surreal to be sitting in your easy chair at home in Hot Springs, Ark., watching the presidential debate and the president talks about a piece of legislation you've drafted," Westerman said.

Forest-related legislation disproportionately affects Westerman's district, which stretches across all or parts of 33 counties.

Overall, 87% of the land is forested, Westerman added.

Ever since his arrival on Capitol Hill in 2015, Westerman has worked to pass legislation overhauling federal forest management practices.

His Resilient Federal Forests Act, which would streamline environmental analyses and make it harder for environmental activists to block forest plans in the courts, passed the House in 2015 and 2017, only to die in the U.S. Senate.

With Democrats controlling the House, Westerman's latest version of the bill has stalled. A Republican sweep in November would change things, he said.

"I think there's going to be some surprises on Election Day," he said.

Westerman, who serves on the House Natural Resources Committee, has let his colleagues know that he'd like to be its next chairman. Or, in the event Democrats retain control, its ranking Republican.

Throughout his time in office, Westerman has opposed the Patient Protection and Affordable Care Act, sometimes referred to as Obamacare.

In 2017, he voted to repeal the landmark health care law. Since then, he has introduced legislation of his own, dubbed the Fair Care Act, aimed at overhauling the nation's health care system.

If passed, hospitals would be required to publish the costs of common medical procedures, a move Westerman said would increase transparency as well as competition.

The legislation also would create a government-funded "high-risk pool" program and would give states greater flexibility to administer health care programs, while also eliminating penalties on employers that fail to provide their employees with health insurance.

"This bill doesn't repeal Obamacare. It fixes it, if you want to use that term," he added.

With Trump in the White House, Westerman has been a reliable ally, and he gives the administration high marks overall.

"I think on policy and fighting for the American people, I think he's done a great job," Westerman said.

Trump has also been "a voice for the people," Westerman said, adding, "A lot of them I talk to they feel like they haven't had a voice in a while."

If reelected, Westerman will continue to advocate for a "conservative, free market approach to solving problems," not the "big government approach" he said Hanson favors.

"I certainly don't mean to disparage my opponent. He seems like a nice guy and I think he believes in the things he's pushing, but I just don't believe that [his philosophy] aligns with what the voters in the 4th District expect," Westerman added.

The 4th Congressional District, which was represented by Democrat Mike Ross from 2001-13, has gone Republican the past four congressional elections.

Tom Cotton beat James Lee Witt, former director of the Federal Emergency Management Agency, in 2012 to secure the seat. After Cotton's election to the Senate, Westerman filled the vacancy.

Hanson, a self-described "community organizer," hopes to reverse that trend.

An attorney and a former law school professor with a juris doctorate from Columbia University, he is running a low-budget, largely self-funded campaign.

While Westerman had $1.1 million in his campaign account at mid-month, Hanson had $4,936, according to his Federal Election Commission reports. He has lent his campaign $69,200.

Interviewed briefly after participating in the Oct. 13 Arkansas PBS debate, Hanson stressed the importance of a Democratic victory on Nov. 3.

"Democrats won't be able to stop this nomination, probably, but I'm not as concerned, probably, as most people," he said.

"In my career, I had the great pleasure of serving as a judicial clerk for a Republican, conservative justice of the Colorado Supreme Court and what that job taught me was that judges do, in fact, interpret laws as they are written. The real problem is that sometimes laws are written bad. The only time cases get to the Supreme Court is where there are gaps, conflicts or ambiguities in the law," he said.

"I think what Democrats, we need to do, is we need to elect Joe Biden president, we need to make Mitch McConnell the minority leader and maintain control in the House, and then we need to pass laws that the American people want us to pass and do them in a way where, if they hit the Supreme Court, justices really don't have much choice but to interpret the law," he said.

While conservative Republicans have dominated Arkansas politics in recent years, Hanson said there are progressive currents in the state as well.

"The ACORN [Association of Community Organizations for Reform Now] Project that Republicans talk about all the time? That started here in Arkansas. The Elaine Race Riots started because farmers, black farmers, were trying to unionize," he said. "We have a history of activism here, and what I want to be able to do, what I hope my campaign will do, is get young people in place to take their seat at the table because that's really what we need right now."

In addition to Westerman and Hanson, voters will have a third option.

In the Arkansas PBS debate, Gilbert promised he would put the interests of constituents first, if elected.

"I'm not beholden to any political party," he said. "I do not have large donors, no special interest groups have their hooks in me."

After the debate, Gilbert expressed concern about the direction of the country.

He singled out Portland, Ore., where a Trump supporter was gunned down in August by a self-identified antifa supporter. The killing followed two homicides at a protest in Wisconsin.

"It worries me that extremists on both sides are going out armed at night and killing each other. I don't care what the issue is, when you start shooting people in the streets, something is bad wrong," Gilbert said.

The perennial candidate, who has participated in previous Arkansas PBS debates, suggested this won't be his final run for public office, telling reporters as he departed: "See you in a couple of years." 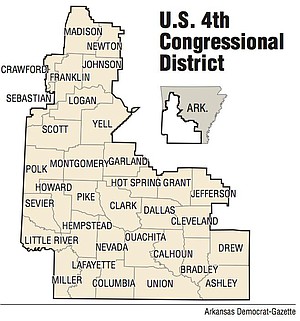