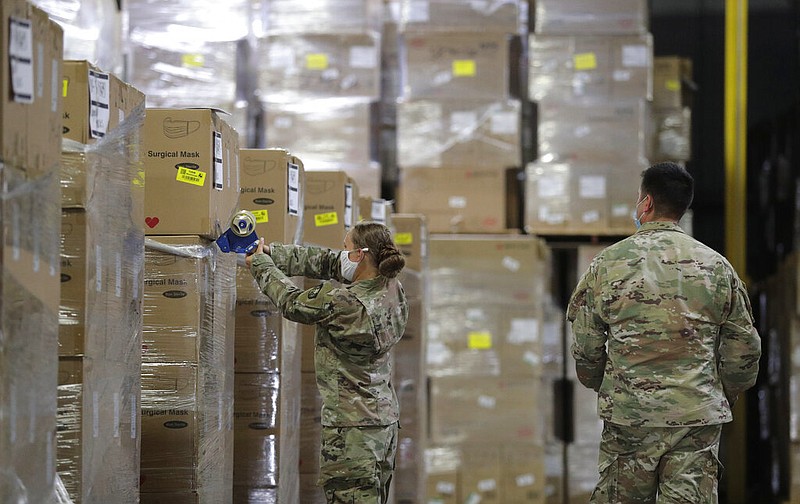 A total of 39 guardsmen are on active duty providing pandemic assistance -- and more than half are assisting the Youth Challenge program with training and logistical support, according to the Arkansas National Guard.

Twenty soldiers from the 39th Infantry Brigade Combat Team at Camp Robinson are assigned to the program while another 14 soldiers are assisting the state Department of Health with case management, Guard spokesman Bob Oldham said.

Five more guardsmen are helping with the distribution of medical supplies.

Guardsmen and airmen have been on state orders without pause since since March 15, when the first set of medics was assigned to the Health Department's operational center.

"The National Guard has been a true lifesaver during the last seven months of the pandemic," Gov. Asa Hutchinson said through a spokeswoman late Friday.

Oldham said the Guard has had as many as 77 on duty across the state during the pandemic. That total was reached in early May.

"Our numbers have fluctuated up and down since [the beginning]," Oldham said. "The Arkansas National Guard stands ready to be of assistance to the state's whole-of-government pandemic response. We assume a support role to augment civil authorities, where needed and directed by the governor, to help in a crisis."

Those additional five solders who are helping with the distribution of personal protection equipment are from the 77th Combat Aviation Brigade, according to the Guard. They are providing warehouse assistance for the Division of Emergency Management.

The Guard has been sent across the state and assigned a variety of duties. It's members have been assigned to provide landscaping assistance at the Veterans Cemetery in North Little Rock and to help with contact tracing at Washington Regional Medical Center's call center in Fayetteville.

Hutchinson said he calls on the National Guard whenever there is an obvious need, and he looks to bring in soldiers who are best suited for the required jobs.

"I generally try to use the Guard in areas of service that relate to their training and areas of expertise," Hutchinson said. "The Guard has also been a key part of our planning for surge capacity for our hospitals."

Most recently, soldiers have been needed at the Guard Youth Challenge program. Some of the full-time cadre and staff members are in quarantine, so the Guard had to fill the void, Oldham said.

The mission of the program, where 20 guardsmen have been assigned, is to "reclaim the lives" of young people ages 16, 17 and 18, according to its website.

The civilian program was created by Congress in 1993. It authorized the secretary of defense to use the National Guard Bureau to put together a program aimed at helping at-risk youngsters.

The program is on the Camp Robinson campus in North Little Rock.

On Friday, Arkansas set a one-day record for coronavirus cases, 1,337.

Hutchinson said Friday that he wasn't sure when the time would come when he wouldn't need the services of the National Guard during the pandemic.

"As to the future, it would be my hope that the Guard could be returned to normal duty, but the course of the pandemic has not yet been set and their service may be called upon again," he said.