ASU looks to fix leaks with its faulty offense 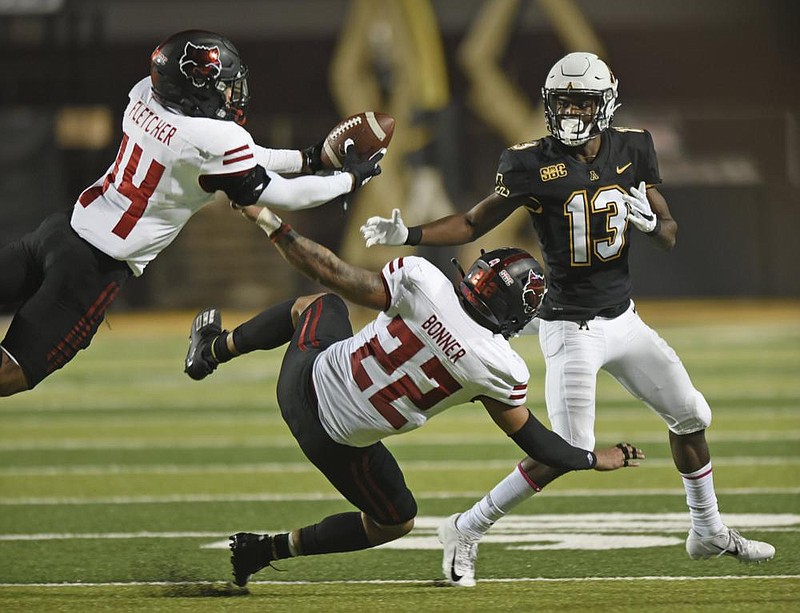 Trailing Appalachian State 31-7 early in the second half, the Red Wolves started the third quarter with a three and out on defense, added a 34-yard field goal and recovered an onside kick.

The defense was finally making stops, and special teams had come up with a couple of big plays to flip the momentum in Arkansas State's favor.

But it was the next three offensive plays that summed up ASU's night.

First and 10: Sophomore quarterback Layne Hatcher was sacked for a 5-yard loss.

Second and 15: Hatcher was sacked for a 7-yard loss.

While the defense was nothing to write home about, squandered opportunities by the offense gave ASU little chance of staying in the game Thursday night in Boone, N.C., that turned into a 45-17 loss.

"Offensively, when you look at the fact that the defense gave them two turnovers, we had [an] onside kick that [we] recovered -- so basically three turnovers and we get zero points out of those three. First and goal at the 1, and we end up with no points there," ASU Coach Blake Anderson said. "That kind of tells you the story. We can't have that kind of night offensively."

Arkansas State's defense, which was playing in its first game since the firing of defensive coordinator David Duggan on Oct. 16, gave the Red Wolves' offense a few chances to stay in the game. Junior safety Antonio Fletcher intercepted a pass in the second quarter after an ASU turnover, and senior safety Elery Alexander forced a fumble on the next Appalachian State possession.

Neither was turned into points.

"It's frustrating, but I've got to trust in those guys," Fletcher said of the offense's missed opportunities. "I know it's the same on defense. Everybody's going to make mistakes. It's not perfect. I know we've got the tools to do it, so it is a little bit frustrating."

Arkansas State's biggest weakness was up front, allowing a season-high six sacks and only rushing for 73 yards on 35 attempts. Before freshman running back Lincoln Pare broke off a 48-yard touchdown run with two minutes left in the third quarter, ASU had zero rushing yards for the game.

ASU has been without starting left guard junior Andre Harris for the last two games, and senior left tackle Jarrett Horst left part way through Thursday's game due to injury, causing the Red Wolves to make adjustments to its offensive line. But Anderson said the team was concerned about its lack of physicality up front all the way back in the spring.

"We do have some injuries and have got some guys that are missing, so there's some continuity issues that we're dealing with, but clearly physically we just got handled," Anderson said. "That was our concern going into the spring, that's why we did spring early was to have a great, solid offseason in the weight room to try and put on 10, 15 pounds of muscle for games like this where we can hold up and covid kind of robbed us of that opportunity. We just didn't get to do that and it showed tonight. They were bigger and more physical than us and it showed."

Arkansas State currently ranks 69th in the country out of 76 teams in rushing offense, averaging 105.3 yards per game on the ground. The Red Wolves are tied for 68th in sacks allowed, with 21 opponent sacks that have totaled 153 yards loss -- the most in the country.

Meanwhile, Arkansas State's passing attack has remained one of the best in the country, ranking third as it averages 384.2 yards per game and has accounted for 23 out of the offense's 27 touchdowns. A big part of that is senior wide receiver Jonathan Adams Jr., who recorded his third consecutive 100-yard game against the Mountaineers, catching 6 passes for 134 yards. Adams, though, wasn't happy with the offense's performance against Appalachian State.

"It was definitely disappointing," Adams said. "We just didn't block very good. The quarterbacks didn't have enough time. Everybody made mistakes, but the majority was we just weren't able to give the quarterbacks enough time to do what they needed to do.

"They played more physical and stuff. We didn't come out and play more physical than they did. We knew it was going to be a dog fight and they came out and did what they're supposed to do."

Adams is hopeful the offense can get back to its normal self against Troy next week, knowing that every game in the Sun Belt is going to be a challenge.

And as a leader not only for the offense but the entire team, Adams said that's going to be his message this week. Move on and improve.