Biden, Trump out on trail post-debate 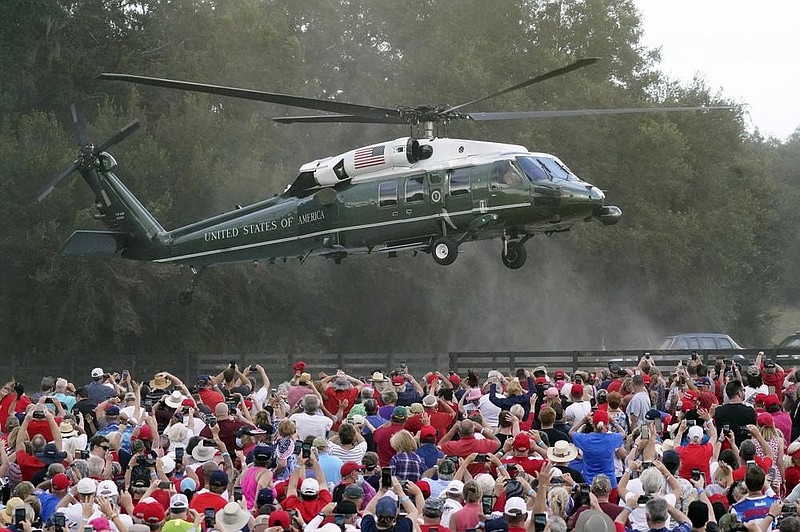 Supporters cheer as President Donald Trump arrives in Marine One for a campaign rally Friday in The Villages, Fla. (AP/John Raoux)

PENSACOLA, Fla. -- President Donald Trump and his allies fought for support in pivotal battleground states Friday after a debate performance that gave new hope to some anxious Republicans.

Former Vice President Joe Biden, campaigning close to home, tried to clean up a debate misstep while urging voters to stay focused on the president's inability to control the worsening pandemic.

The surge of activity with just 11 days remaining in the 2020 contest highlighted the candidates' divergent strategies, styles and policy prescriptions that are shaping the campaign's closing days. More than 52 million votes have already been cast, with an additional 100 million or so expected before a winner is declared.

The coronavirus debate has pushed Trump onto the defensive for much of the fall, but for the moment it is Biden's team that has been forced to explain itself.

[Video not showing up above? Click here to view » https://www.youtube.com/watch?v=ujm3BQk4dDc]

In the final minutes of Thursday night's debate, the former vice president said he supports a "transition" away from oil in the U.S. in favor of renewable energy. The campaign released a statement hours later declaring that he would phase out taxpayer subsidies for fossil fuel companies, not the industry altogether.

After the debate, Biden told reporters that he would not "ban" fossil fuels or move away from them for "a long time."

Republicans see Biden's comments as potentially damaging to Democrats in states that rely on the oil and gas industry. Trump has sought to make hydraulic fracturing, a process of oil and natural gas extraction, a key issue in Pennsylvania.

Trump, campaigning in Florida, repeatedly seized on the issue.

"That could be one of the biggest mistakes made in presidential debate history," he said at a rally at The Villages, a sprawling retirement community in Florida, where thousands of people gathered outdoors on a polo field.

"It looked like he made it, it looked like it was going to be OK. He got off the stage, going back to his basement, and then they hit him with the energy question. They hit him with a thing called oil," he told the crowd that appeared to be one of the largest of his campaign to date.

"Let's be really clear about this: Joe Biden is not going to ban fracking," Harris said. "He is going to deal with the oil subsidies. You know, the president likes to take everything out of context. But let's be clear, what Joe was talking about was banning subsidies, but he will not ban fracking in America."

Biden said the same after the debate, but he did not address his energy policy in a speech Friday that focused on the coronavirus.

As for Biden and oil, while ending the nation's reliance on fossil fuel is popular among many liberals, the idea could hurt him among working-class voters in swing states such as Pennsylvania, Ohio and Texas who depend on the industry, and fracking in particular, to make a living.

"I would transition away from the oil industry, yes," Biden said in the debate's closing minutes under peppering from Trump. "The oil industry pollutes, significantly. It has to be replaced by renewable energy over time."

As part of his plan to fight climate change, Biden has said he would ban new gas and oil permits -- including fracking -- on federal lands only. The vast majority of oil and gas does not come from federal lands.

Still, Biden's comments could add headaches for Democrats in oil-heavy states. Rep. Kendra Horn, an Oklahoma Democrat who flipped a Republican seat in 2018, tweeted that she disagreed with him.

"We must stand up for our oil and gas industry. We need an all-of-the-above energy approach that's consumer friendly, values energy independence and protects OK jobs," she wrote.

In Florida, Trump made several claims before his retirement community crowd, painting Biden as the one who would harm them. Biden's election, the president said, "would mean that America's seniors have no air conditioning during the summer, no heat during the winter and no electricity during peak hours."

Trump told the crowd that he would always "love, protect and defend our seniors."

Trump and Biden both see Florida as crucial to victory in the election, and both candidates are trying to shore up support with senior citizens, who historically break for Republicans.

In 2016, Trump carried The Villages and other Florida exurban areas by a wide margin over Democrat Hillary Clinton, helping him win the state. But this year, polls suggest that older Americans are not backing Trump nearly as much as they did in 2016, which could make The Villages vote the deciding factor in who wins Florida and its 29 Electoral College votes.

In a warm-up speech, Florida Gov. Ron DeSantis said a victory for Biden would lead to nationwide lockdowns to combat the virus, and he offered up Florida as a model for the country, despite a recent surge in positive cases.

"We will not let Joe Biden lock this country down," DeSantis said.

Two hours before the event began, nearly every folding chair was occupied in the barricaded off portion of the venue. Much of the mostly older crowd sat shoulder to shoulder, and fewer than half were wearing masks.

Golf carts, some decked out with Trump signs and the occasional plastic skeleton, rivaled the number of cars arriving.

Diane Salutare, 62, and her friend Mark Wiley, 64, were among the early arrivals to the rally in a golf cart featuring a Trump cardboard cutout and a plush Wile E. Coyote wearing Trump's face on a T-shirt.

Salutare said it was important for her to attend the rally after watching the final presidential debate the night before, which she said was "done in great taste and form."

"[I wanted] to be part of this exciting time that we're living in," she said. "Even though we are also living in dire times, there's a light at the end of the tunnel."

Neither Salutare nor Wiley were wearing masks. Salutare said the virus didn't concern her.

Wiley said he approves of Trump's policies but does not like the president personally.

"He's a liar, he's a misogynist, guess what? I am [too]," he said. "I could point to a lot of men over there that would tell you the same thing: When men get together after golf, it's locker room talk. You cannot judge a man by the way he talks about women. You judge a man by what he does."

Biden criticized the president even before the rally began.

"Floridians deserve a president who understands this challenging time we're living through, and has a plan to get us out of this pandemic and build back our economy," Biden said in a statement. "Ask yourself: what exactly does Donald Trump bring to Florida today to help your family get through this pandemic?"

Though Biden supporters were scarce on the polo grounds, a single plane flew overheard early in the afternoon trailing a banner reading: "Trump will take away health care, Biden 2020."

Both campaigns predictably claimed a boost from the televised debate that drew an audience of tens of millions. But with roughly one-third of expected ballots already cast through early voting, it is unclear how much the face-off could alter the course of the campaign.

The pandemic was a major focus of Thursday's debate, and it was the sole focus of Biden's only public appearance Friday close to his home in Delaware, which is hardly a swing state.

During the debate, Trump predicted that the pandemic, which is escalating in several states, will "go away." Biden countered that the nation was headed toward "a dark winter." The former vice president reiterated that theme Friday in Wilmington, Del., as he outlined his plans.

Biden vowed to work with Congress to enact a new economic relief package for hard-pressed individuals, businesses and states by the end of January after seeking input from Republican and Democratic governors. He also promised to encourage state leaders to implement mask mandates. Should they refuse, Biden said he would lean on municipal leaders to require universal mask wearing in their communities.

Trump insisted that Biden was being too pessimistic.

"We're not entering a dark winter," he said. "We're entering the final turn and approaching the light at the end of the tunnel. That's how I look at it."

Information for this article was contributed by Steve Peoples, Jill Colvin, Will Weissert, Kathleen Ronayne, Ellen Knickmeyer, Kevin Freking, Zeke Miller and Bill Barrow of The Associated Press; and by Ryan Gillespie and Katie Rice of The Orlando [Florida] Sentinel. 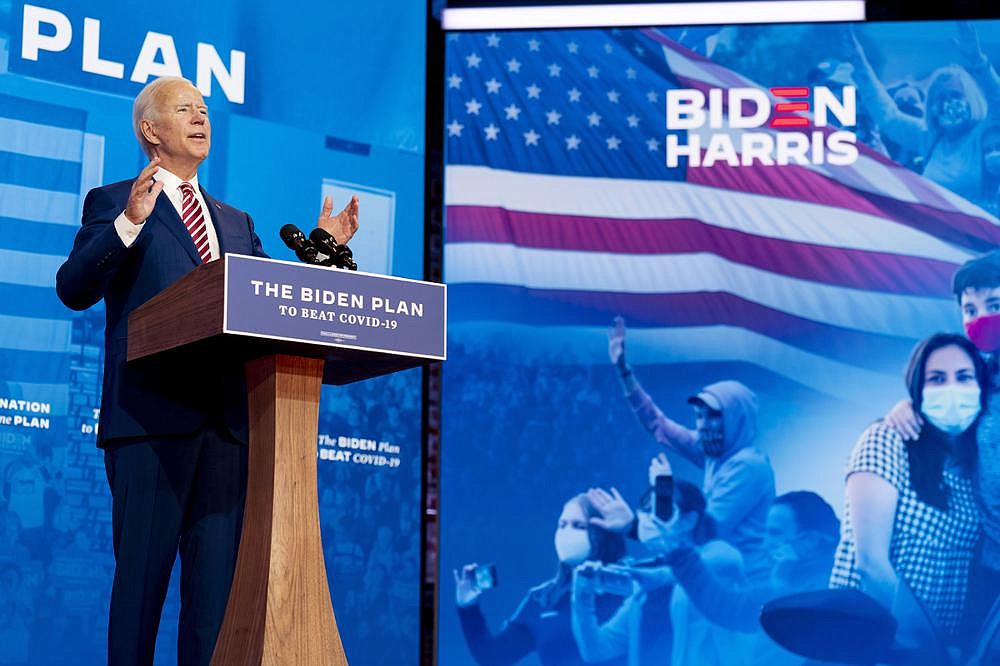 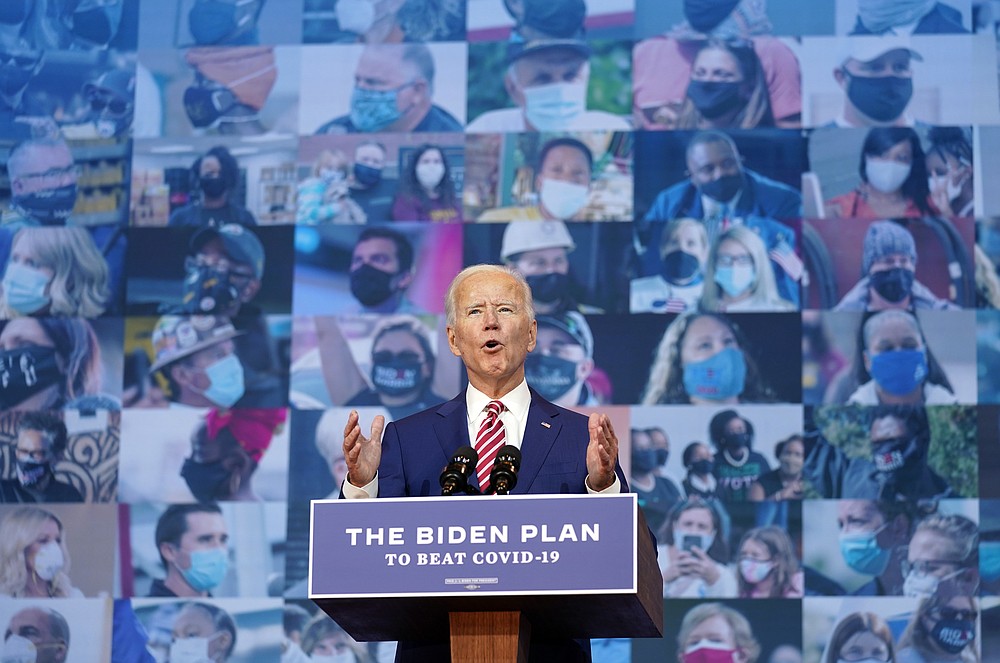 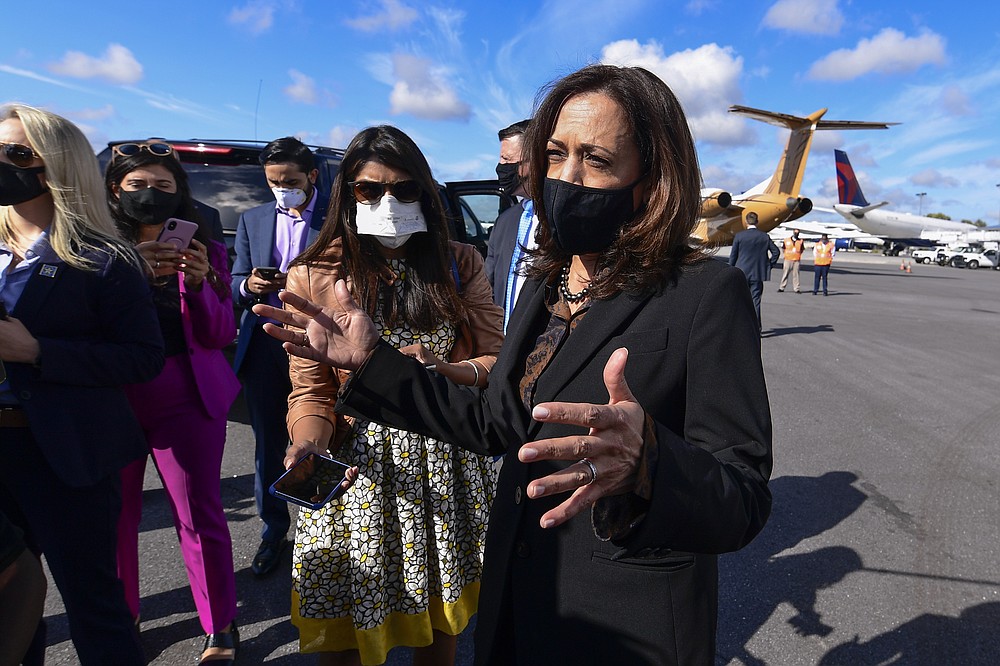 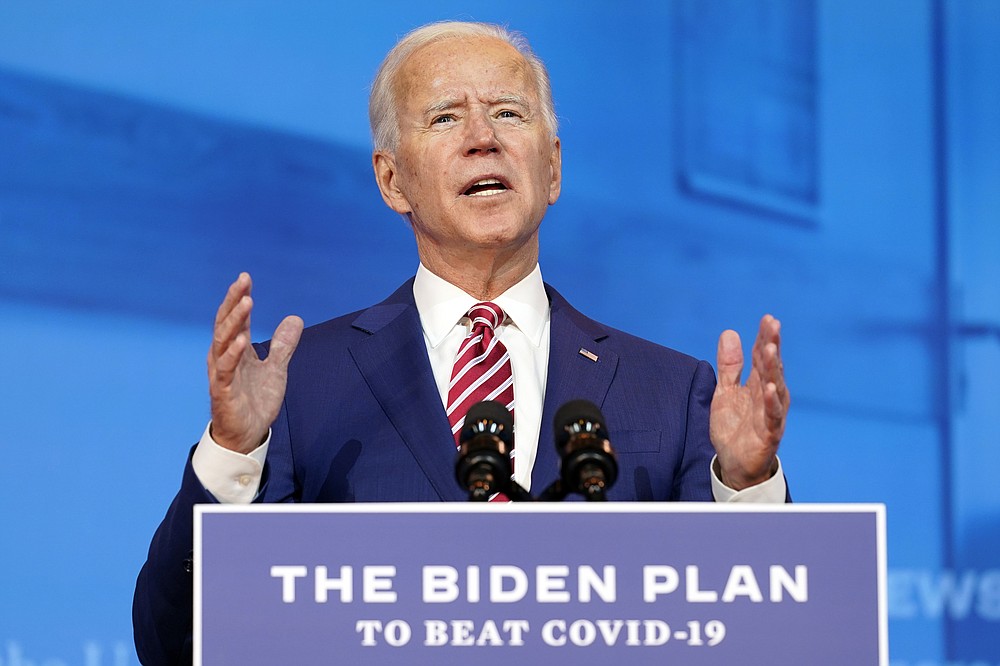 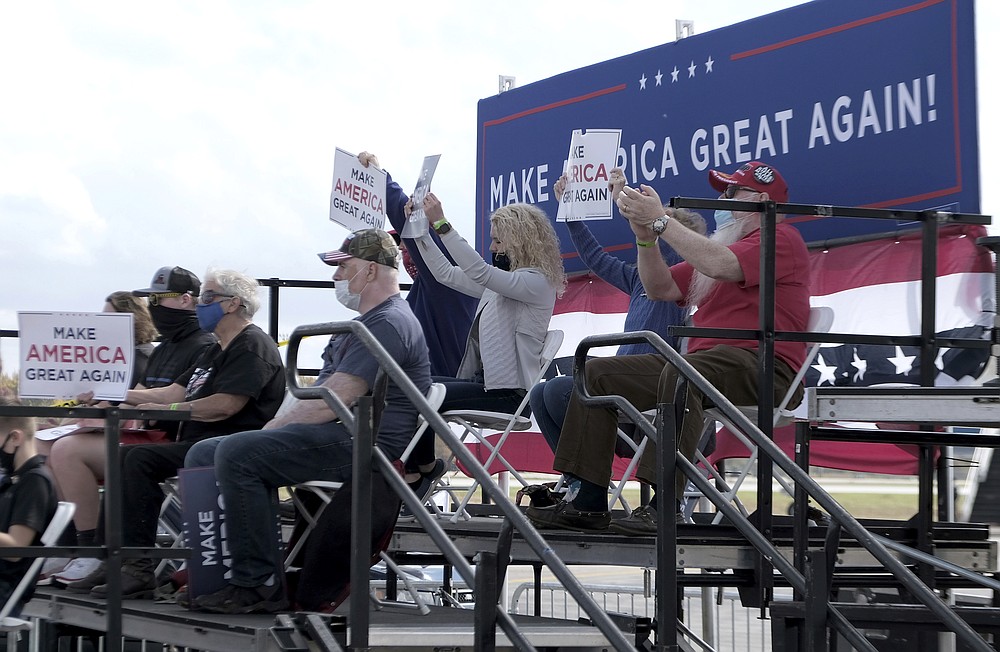 Supporters of Vice President Mike Pence hold up signs during his rally at the Grand Aire hanger of the Eugene F. Kranz Toledo Express Airport in Swanton, Ohio on Friday, Oct. 23, 2020. (Lori King/The Blade via AP) 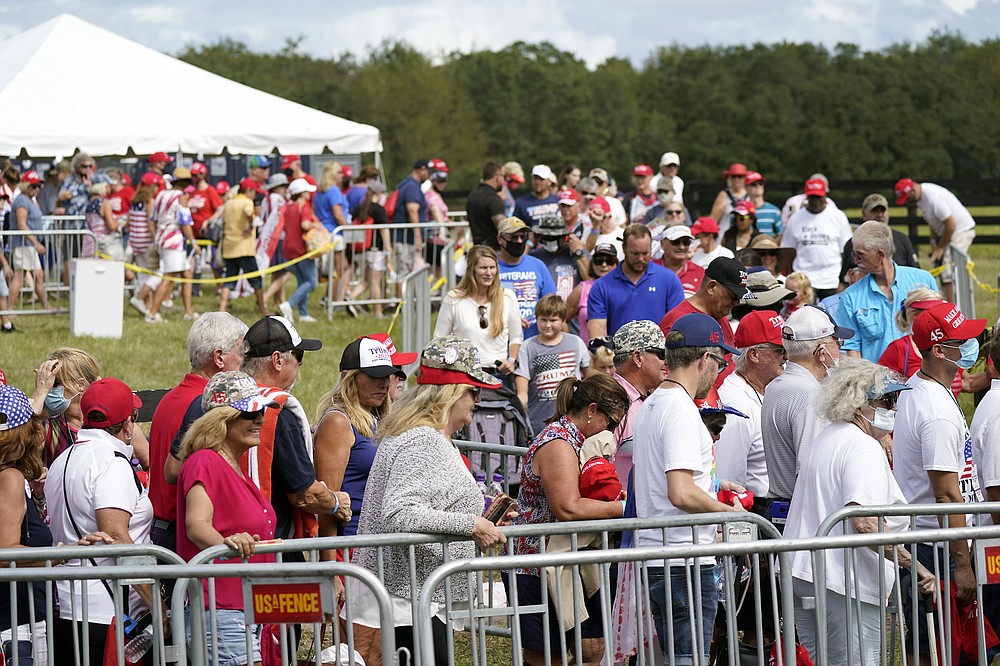 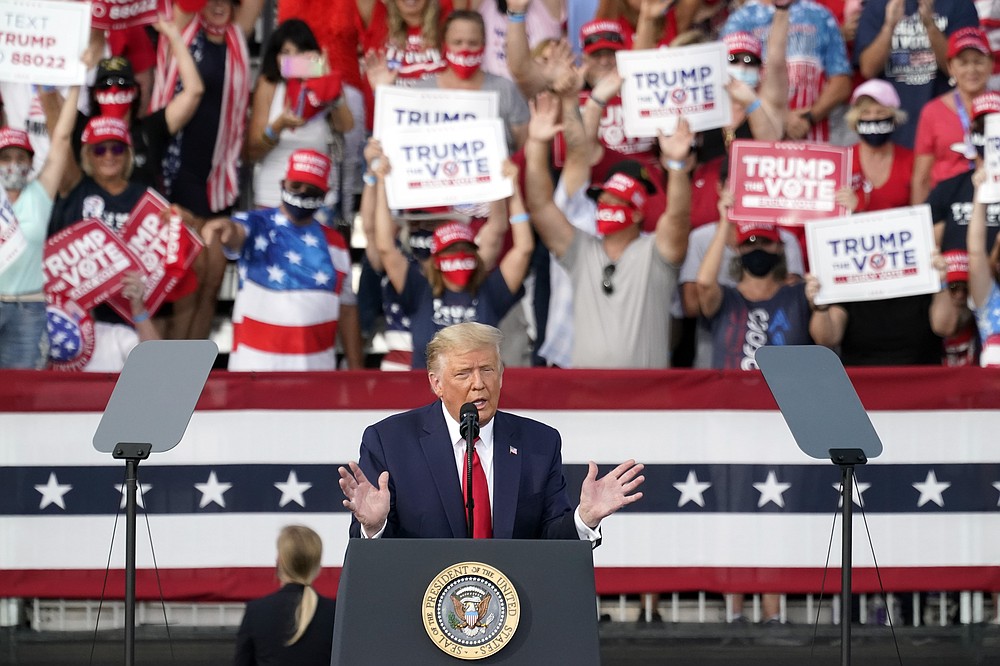 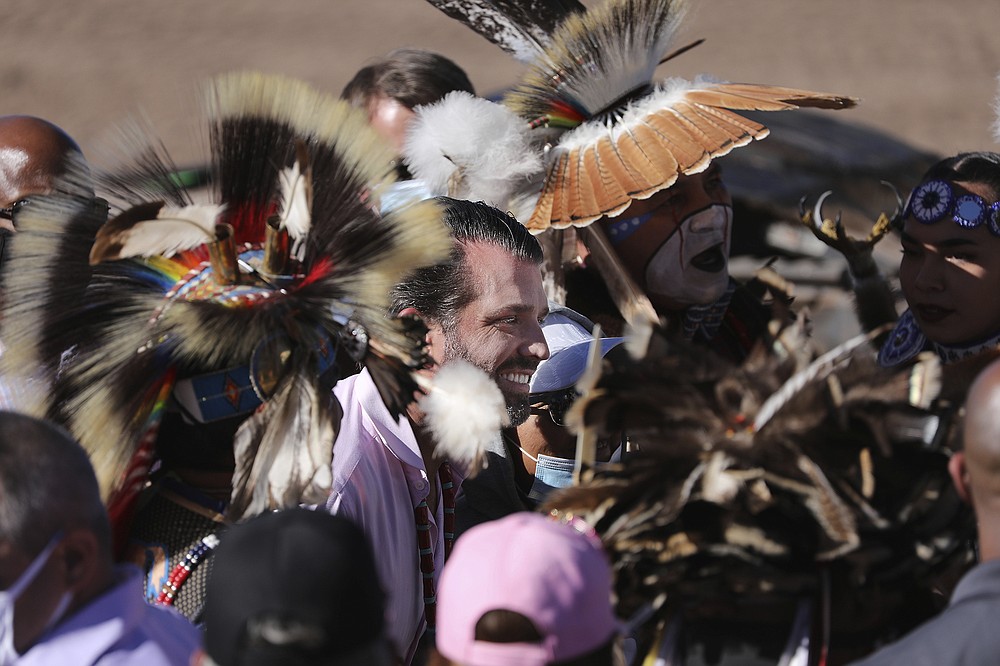 Donald Trump Jr. greets people who attended a rally Thursday, Oct. 15, 2020, in Williams, Arizona, that served as the launch of the Native Americans for Trump coalition. (Jake Bacon/Arizona Daily Sun via AP)
ADVERTISEMENT