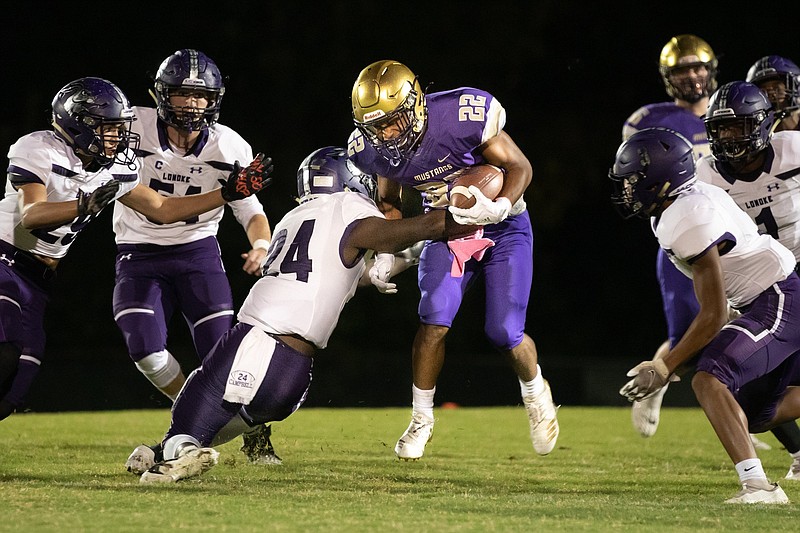 As the final seconds wound down on the Central Arkansas Christian Mustangs' 49-34 victory over the Lonoke Jackrabbits at Mustang Mountain in Little Rock on Friday night, CAC Coach Tommy Shoemaker spoke to a game official near the edge of the field.

Including Stuttgart, CAC (8-0, 5-0) remains one of two undefeated 4A-2 Conference schools. It has two regular-season games left, including a home-field and potential championship contest with Stuttgart on Nov. 6.

Shoemaker said he expected a defensive struggle with Lonoke, but the game evolved into a second-half shootout highlighted by a senior from CAC and a freshman from Lonoke.

"He's going to be a big-time talent," Lonoke Coach Harry Wright said. "He's still young, but he played really well. To be a freshman and play in this type of game and to play the way he did, I'm proud of him."

CAC senior quarterback Palmer Gilbrech completed 15 of 25 passes for 235 yards and 4 touchdowns. He directed a drive that gave CAC a 42-28 lead on junior running back Tyler Williams' 2-yard touchdown run with 6:20 left in the game.

"It was a game of big plays on both sides," Shoemaker said. "Fortunately we made a couple more than they did."

Another touchdown pass from Allen had Lonoke within 42-34, but Williams' 35-yard run completed the scoring with 1:45 left.

"I told [Williams] at halftime, 'Hey dude, you're going to have to take this thing home for us,' " Shoemaker said. "He showed up big-time in the second half."

Williams rushed for 110 yards and 2 touchdowns on 22 carries.

CAC started the scoring with a screen pass from Gilbrech that Williams carried 29 yards for a touchdown with 6:35 left in the first quarter.

Lonoke answered on the next play from scrimmage with a 48-yard touchdown run by senior running back Jacoree Womack to tie the score at 7-7.

CAC's lead was 14-7 after Gilbrech's 13-yard touchdown pass to Jackson Richmond with 1:29 left in the first quarter. The score was set up by senior defensive back Ty Bahnks' fumble recovery at the Lonoke 30.

An 11-yard touchdown pass from Gilbrech to senior receiver Cole Shoemaker gave CAC a 20-7 lead with 7:21 left in the second quarter.

After a CAC punt, Lonoke was at its 4 with 3:01 left in the first half but responded with a 13-play drive, completed by Allen's 7-yard touchdown run at the halftime horn, and Lonoke was within 20-14.

"CAC doesn't make mistakes," Wright said. "They don't beat themselves. They're disciplined and they're well-coached. They make you earn it."