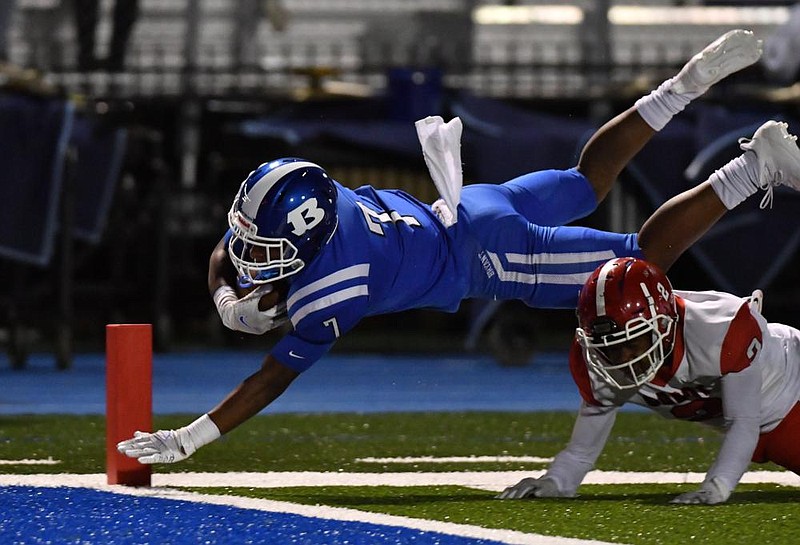 Bryant receiver Cory Nichols dives over Cabot cornerback Tyler Parks to score a touchdown during the top-ranked Hornets’ victory over the No. 6 Panthers on Friday in Bryant. More photos available at arkansasonline.com/1024cabotbryant. (Special to the Democrat-Gazette/Jimmy Jones)

Quarterback Austin Ledbetter threw three of his four touchdowns in the first half as top-ranked Bryant strolled to a 42-14 victory over Cabot on a windy, brisk homecoming at Hornet Stadium.

Ledbetter completed just eight passes, but all of them seemingly had a lasting effect for Bryant (7-0, 4-0), which beat its 7A-Central Conference rival for the fifth time in a row and ran its overall winning streak to a state-best 23 games.

"I really thought he threw the ball well," Bryant Coach Buck James said of Ledbetter, who completed 8 of 11 passes for 183 yards. "He kept plays alive by moving around in the pocket and made good decisions when he threw it. And then the way our offensive line played and gave him time to find some guys open, I was really pleased with that."

Only one of Ledbetter's completions went for less than 10 yards while five others covered 24 yards or more. But James' praise for his offensive front didn't end with their steady play in the passing game.

The Hornets rushed for more than 250 yards, led by running back Xavier Foote. The senior carried 13 times for 147 yards and scored on a 3-yard run early in the second quarter.

Senior tailback Jamarien Bracey rushed for 82 yards on 15 carries with a touchdown for the Hornets.

"We did a good job of blocking and running the football," James explained. "Xavier and Jamarien both ran the ball hard. The line played well – they just had too many holding calls."

Senior quarterback Tyler Gee finished 13-of-26 passing for 276 yards with a touchdown for Cabot (5-2, 1-2), which was playing its first game since losing a 52-49 decision to Conway on Oct. 9. Junior wide receiver Braden Jay caught 4 passes for 170 yards and a touchdown.

Bryant scored touchdowns on all five of its first-half possessions and led 35-7 at halftime.

"Their quarterback made some plays against us that were big," Cabot Coach Scott Reed said. "And when they got in space, their team speed showed. We had a hard time tackling them and catching them. You can see why they're the No. 1 team in Arkansas.

"But we are getting better. A couple of our guys made some plays in space, too. I thought our kids stayed in there and played hard all night. We know we've got some work to do."

Ledbetter put Cabot in a bind early when he connected with sophomore wide receiver Cory Nichols for a 41-yard touchdown with 8:42 left in the first quarter. He found him again for a 37-yard score a little more than five minutes later to give the Hornets a 14-0 lead.

The Panthers struck quickly following Nichols' second touchdown. On the second play of the ensuing drive, Gee rolled to his right and found Jay streaking down the right sideline for an 80-yard touchdown.

But the Hornets hit back, moving 73 yards in eight plays, with Foote scoring at the 11:55 mark of the second quarter.

Bracey had an 8-yard touchdown run on Bryant's next series to polish off a 7-play, 52-yard drive to push its advantage to 28-7. Ledbetter's 24-yard scoring toss to sophomore wide receiver Jordan Knox with 1:53 to go in the period eventually allowed the Hornets to hold their 28-point lead at halftime.

Knox would haul in another 24-yard touchdown pass from Ledbetter with 5:36 left in the third quarter to extend Bryant's lead to 42-7. Sophomore wide receiver Ethan Kemp added a 7-yard score for the Panthers midway through the fourth quarter.

With the victory, Bryant can now shift its focus to next week's battle with unbeaten North Little Rock, which blistered Fort Smith Northside 45-7. The Charging Wildcats (7-0, 4-0) have won four of their past five games by 35 points or more and was the last team to beat the Hornets (34-28 in 2018).

"We're not going to always get the chunk yards like we did [Friday]," James said. "Cabot's a young, inexperienced defense. We're fixing to play some guys here who are straight dogs that will play hard and run to the football. 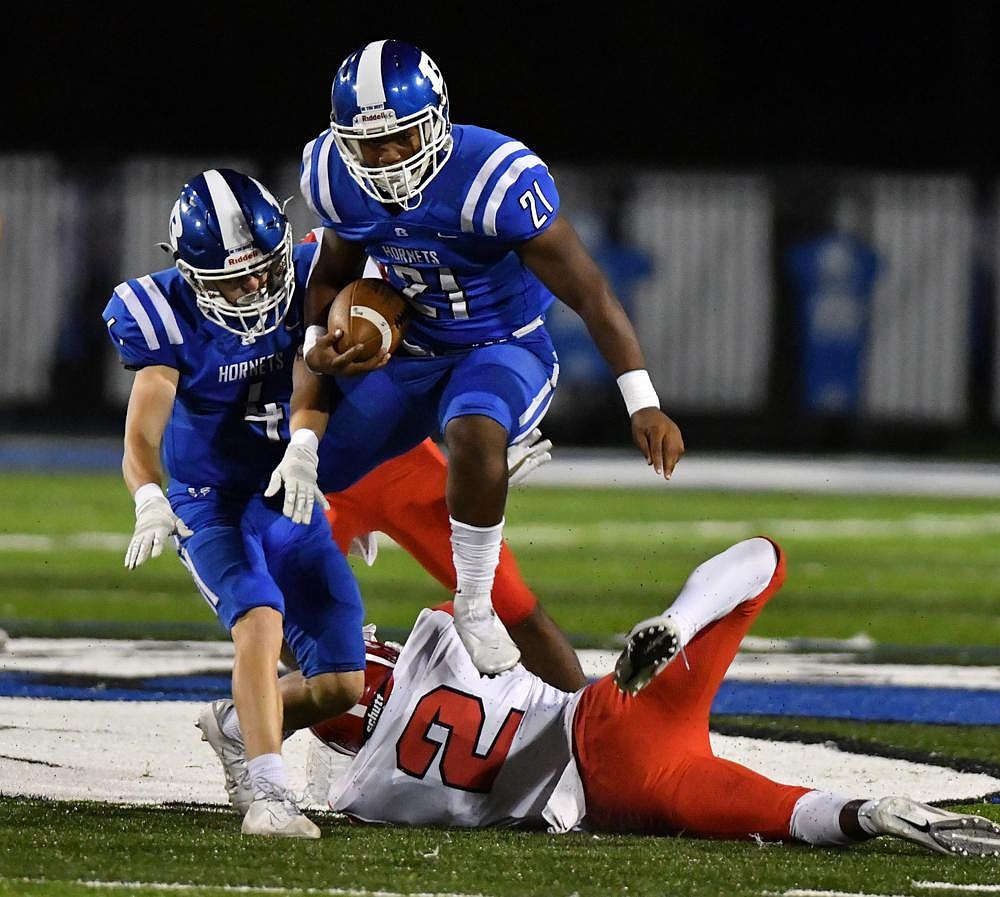 Bryant running back Xavier Foote (21) hurdles Cabot cornerback Tyler Parks during the Hornets’ 42-14 victory Friday at Hornet Stadium in Bryant. Foote carried 13 times for 147 yards and scored on a 3-yard run early in the second quarter. More photos at arkansasonline.com/1024cabotbryant/ (Special to the Democrat-Gazette/Jimmy Jones)
ADVERTISEMENT