Colonels next up for Bears 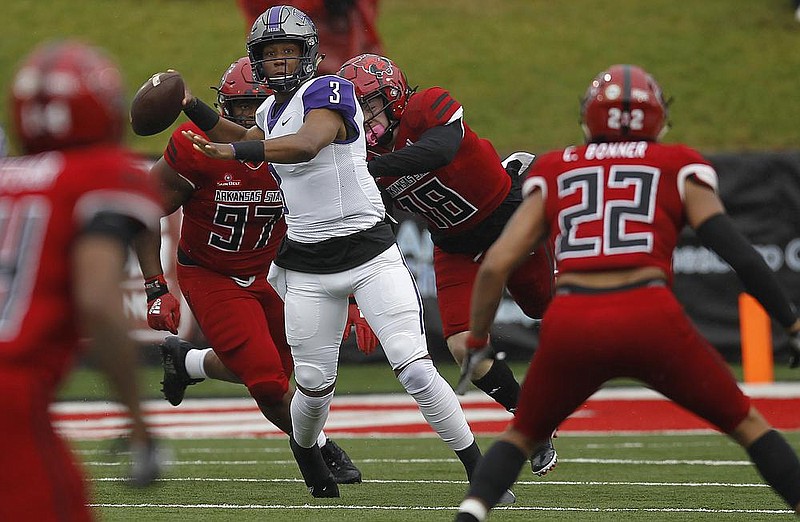 One home-and-home series done, one more to go.

The University of Central Arkansas achieved a rare two-game regular-season sweep of Missouri State last week. Today, the Bears will embark on the first of another in-season twinbill when they challenge Eastern Kentucky of the Ohio Valley Conference at Roy Kidd Stadium in Richmond, Ky.

"It's our sixth road trip in seven games, and that's unique in itself," said UCA Coach Nathan Brown, whose team had only three home games scheduled this year because of challenges caused by covid-19. "It'll be our longest one of the year, too, so that's to factor in. But this team we're about to face continues to improve each week. I mean, yeah, they only have one win on the season, but you can see their improvement from week to week.

"Their record isn't really indicative of just how good they really are."

The overall mark for Eastern Kentucky (1-4) may indicate things haven't gone its way through five games, but a deeper look at just who the Colonels have competed against explains a lot.

Eastern Kentucky, like UCA, has played a daunting schedule, highlighted by back-to-back blowout losses at Conference USA foe Marshall (59-0) and Big 12 program West Virginia (56-10) to open the year. The team has fared better in their past three games, and that's got Brown on alert.

The Colonels held The Citadel to 36 yards passing in a 37-14 victory, then had their next two opponents on the ropes before falling short.

Eastern Kentucky piled up nearly 500 yards against Southland Conference member Houston Baptist before losing 33-30 when its potential game-tying extra-point attempt was blocked and returned for two points late in the game.

In addition, the size of two of the Colonels top three wideouts is notable. Wide receiver Keyion Dixon, a 6-3, 185-pound senior, leads the FCS in receiving yards while junior teammate Jacquez Jones is seventh. Another Colonel, Jackson Beerman (6-5, 210), ranks eighth.

"We're going to have our hands full," Brown said about Eastern Kentucky. "They want to throw deep, and they take a lot of shots. They've got two really big receivers who are maybe not quite the caliber of receiver that Arkansas State has but are similar in size. The 6-foot-3 kid has NFL-type talent.

"The quarterback is solid who's coming into his own. And then they've got a big running back that's built like Jerome Bettis. That's who he looks like. You're not going to be able to lunge at that kid, arm tackle him or ride him."

UCA (3-3) is riding a wave of confidence after its victory over Missouri State. The Bears' defense forced six turnovers, including one that was returned for a touchdown, and came away with seven sacks. Defensive end Logan Jessup accounted for 3.5 of those sacks to help UCA erase an 11-point, second-quarter deficit.

"When the team needs it, it just means a little more when the defense is able to come through," said Jessup, who's played three different defensive positions because of injuries. "Sometimes the offense has to pick us up, but whenever it's our turn to pull our end of the rope, I think we do a good job of doing so.

"I've got to credit our coaches for getting us ready to play each and every week. I think we had a beat on [Missouri State] for sure, having played them once already."

Another defensive effort like the one the Bears put forth a week ago and UCA will likely be one up on Eastern Kentucky before the two meet again Nov. 14 in Conway.

"That's a good team that should've had a win over an FBS team last week," Jessup said. "But as far as us go, we've had good days of preparation. We've got to understand and execute our game plan.

"We know what they're going to do. They've got a pretty mobile quarterback, a big ol' running back and their offensive line is pretty good. But we're looking forward to the challenge."