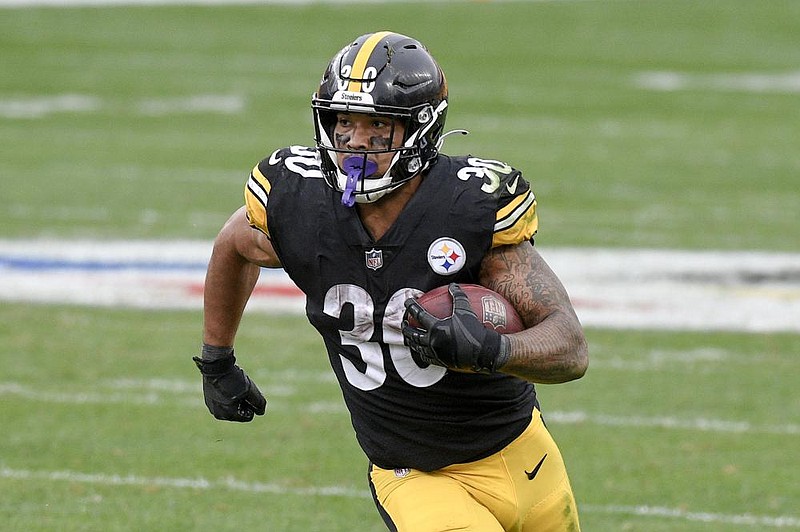 Spurts of success amid injuries have defined Pittsburgh’s fourth-year running back James Conner, but he has proven to be a key reason why the Steelers are off to a 5-0 start this year as they prepare to face a Tennessee Titans team with the same record Sunday. (AP/Don Wright)

PITTSBURGH -- James Conner's Pittsburgh Steelers teammates insist he's having a good time, that the fourth-year running back has never been happier or more engaged.

Not that you'd know it by talking to him. Asked Friday why he seemed so sullen when the subject was raised of his strong start for the unbeaten Steelers (5-0), Conner offered an answer that made up for in sincerity what it lacked in joy.

"Because this isn't football," the fourth-year pro said.

It's hard to blame him for being less than expansive.

The 25-year-old has spent the last half-decade being defined by things off the field that's overshadowed at times what he's done on it. The cancer diagnosis in 2015 while playing at the University of Pittsburgh. The inspiring recovery that culminated in Conner getting drafted by the Steelers in the spring of 2017. Spending 2018 as the replacement while Le'Veon Bell sat out amid a contract dispute. Flashes of excellence tempered by nagging injuries that have made consistency elusive.

And there's the mixed messages from General Manager Kevin Colbert during the offseason. Colbert stressed repeatedly the team believed in Conner, while at the same time declining to offer him a new deal, effectively turning 2020 into a "prove it" year with free agency potentially looming.

Conner has dutifully addressed everything through the years, though he knows words can only do so much. He's tired of it, to be honest, and more than eager to have his ever-evolving game do the speaking instead.

Conner shook off an ankle sprain in Week 1 against the New York Giants that stirred talk of "here we go again" to top 100 yards in three of the last four games, including an efficient 20-carry, 101-yard performance Sunday in a 38-7 demolition of Cleveland.

"I think his game right now is at an all-time high," quarterback Ben Roethlisberger said. "He's picking up blitzes. He's catching the ball out of the backfield when we need him to, and he's getting the tough yards when we need that as well. The thing I keep telling him is to just have fun. When he has fun, he plays great football."

The Steelers will likely need Conner to be great when they visit Tennessee (5-0) on Sunday. The Titans are led by the NFL's hottest back in Derrick Henry, a marvel of size and speed who is just as comfortable racing 94 yards for a touchdown as he is bulling over three defenders for a first down.

There was a time not long ago when Conner was much the same. He left Pitt as the Atlantic Coast Conference's all-time touchdown leader, a violent runner who enjoyed dishing out punishment. Not so much anymore. While Conner is still more than willing to lower his shoulder, he's become far more capable of using a quickness that wasn't readily apparent during his college career.

"Spent a lot of time at the Ben Roethlisberger footwork camp just really improving on his footwork," Roethlisberger said with a laugh. "But I just think he is playing with confidence and he's having fun playing the game. It's not like all of a sudden he is this new running back. He's James Conner."

More precisely, he's the James Conner who dazzled during the first half of 2018. While Bell went jet skiing in Florida after declining to sign his franchise tender, Conner helped make sure Pittsburgh's offense kept right on humming, averaging 135 yards from scrimmage and scoring 10 touchdowns over the season's first eight weeks. Defenses, however, adjusted. A lower-leg contusion forced him to miss three weeks.

Last year wasn't much better. Defenses loaded up to stop the run after Roethlisberger went down at halftime of Week 2 with a right elbow injury. Conner went over 100 yards rushing just once in 2019.

Though Benny Snell Jr. showed flashes during his rookie season and the team used a fourth-round pick in the 2020 draft on Anthony McFarland Jr., Coach Mike Tomlin stressed Conner remained "the bell cow."

One that offensive coordinator Randy Fichtner is doing his best to not overuse. Conner has been somewhere between 18-22 touches during each of Pittsburgh's last four games, a range Fichtner considers just right.

"James has done nothing to come off the field," Fichtner said. "But knowing and given the circumstances that when he is fresh, he is a bull and that is awesome."