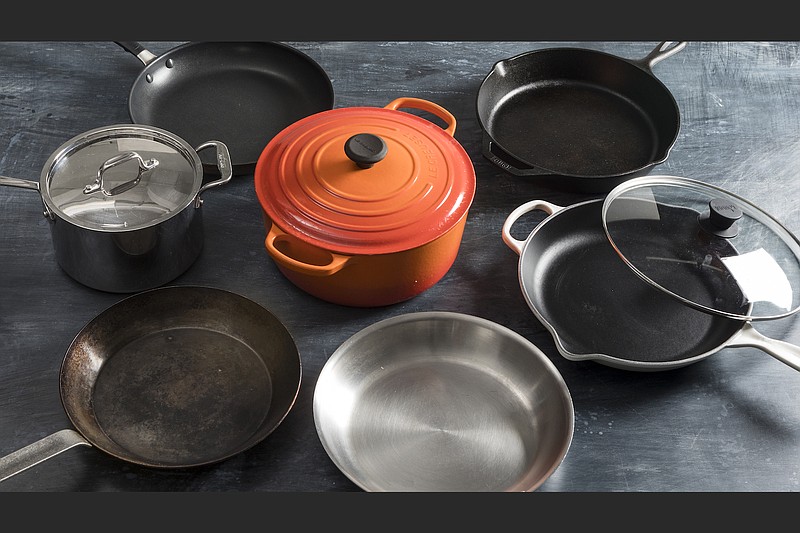 Cooking Basics — Investing in a few decent pieces of cookware will make cooking easier and your food better. America’s Test Kitchen expert says every kitchen should have a Dutch oven, two large skillets and a large saucepan. (Courtesy of Kevin White/ATK)

Until a few weeks ago, I thought I was an OK cook. I was wrong. In fact, I probably have no business writing about cooking, but since when has lack of knowledge stopped me.

Recently, during a two-hour conversation with America's Test Kitchen's executive reviewer Lisa McManus, who really does know what she's talking about, I learned that my kitchen, though it contains plenty of cookware, is in fact ill-equipped. Of the four essential pieces of cookware McManus says every kitchen should have I had only two. I was lacking a Dutch oven and a cast-iron skillet.

No wonder my cooking isn't better!

Now, as a compulsive home organizer and improver, I pride myself on having only what I need and no more, and on buying household goods once and buying them right. However, in my kitchen, not only do I not have the right basics but what I do have is subpar.

"What are you doing?" my husband asked when he found me in the kitchen with our pans all over the counter.

"Our pans are all wrong."

"What's wrong with our pans?"

"The nonstick surfaces are shot. The handles are plastic. The metal is too thin."

"What are you telling me?"

"If you want better dinners, we have some pan purging and purchasing to do," I said. While normally DC would question the need to buy more of anything, the prospect of better meals prompted him to hop online.

"Since the pandemic, folks are cooking more at home and turning to us," McManus said. A multimedia company, America's Test Kitchens teaches cooking basics through public TV shows and magazines.

McManus had her work cut out with me. I told her about my cookware, an assortment of 10 pots and pans. "That's typical of people who buy sets," McManus said. The four pans I do use are nonstick, not her first choice, and, I learned, they were also well past their prime, if they ever had a prime. The surface of a nonstick pan only lasts a few years, and mine were going on 10. Because good pans are a household staple and an investment, McManus tells home cooks to buy pans one at a time based on what they cook and can afford. Start with a few durable, flexible workhorses that will earn their keep. Here are four pieces every well-equipped kitchen should have, and the brands ATK recommends:

A Dutch oven. These high-sided, cast-iron, enamel-coated cookers can go from stovetop to oven and can be used to steam, deep fry, braise, bake or roast. Choose round over oval because round fits burners better, and get the 7-quart size. Cooks universally agree that Le Creuset makes the winning Dutch oven, but it's expensive at (cough) around $375. However, McManus also recommends a best-buy runner up, the much less expensive Cuisinart Chef's Classic Enameled Dutch Oven Casserole.

A four-quart saucepan with lid. A high-walled saucepan that can handle gravies, soups and puddings is another kitchen must. At ATK the category winner is the All-Clad tri-ply stainless saucepan. "You can always cook a small amount of food in a large pan, but you can't cook a large amount in a small pan," McManus said. So start large and get smaller pans later.

A 12-inch stainless-steel skillet. Again, the ATK team favorite is the All-Clad D3 stainless-steel frying pan with lid, which sells for around $120. "That may sound like a lot, but these are the hardest workers in your kitchen," McManus said.

A 12-inch cast-iron or carbon steel skillet. Lodge makes the winning cast-iron skillet, which, for a change, fits most budgets. "This is the one pan to get if you're broke," she said. Last week, I found a Lodge 12-inch cast-iron pan at Home Goods for $15. I have cooked in it every night since, and dinners are markedly better. Carbon steel offers the same benefits of cast iron but is lighter. The ATK team favorite is the Matfer Bourgeat Black Steel round frying pan. When properly cared for and seasoned, both materials develop nonstick surfaces naturally, and never need replacing.

After you have your core set, the following items fall in the would-be-nice-to-have category:

A generous stockpot (eight to 12 quarts), a two-quart saucepan, a 10-inch skillet, and an 8-inch skillet.

Although nonstick pans are easy to clean and inexpensive, don't make them your first purchase, McManus said. The coating goes downhill fast, so they need to be replaced every few years. With wear, the coating, usually made of polymerizing tetrafluoroethylene, or PTFE, (popularly known as Teflon), blisters, peels and gets in food, which has raised health concerns. Though alternate nonstick surfaces are available, you'll be better off starting your recipe with a little oil in a regular pan.

My worn-out nonstick cookware is panned and banned. A Le Creuset and a tri-ply stainless frying pan are on the way, and my cast-iron skillet and I are making beautiful meals together.

Join me next week to find out how to care for your cookware, so your investment lasts a lifetime.

Syndicated columnist Marni Jameson is the author of five home and lifestyle books, including "Downsizing the Blended Home — When Two Households Become One."