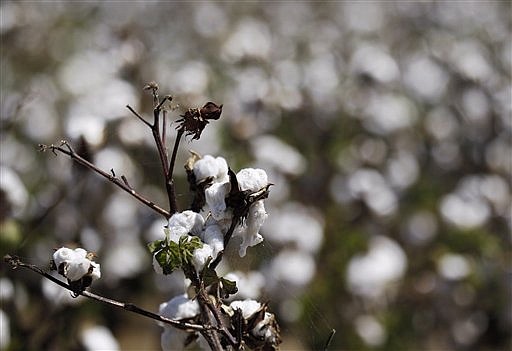 Cotton grows in a field near Coy in this September 2012 file photo. (AP / Danny Johnston )

Winds and rain from Hurricane Delta, the 25th named storm of 2020, blew through much of southeastern Arkansas recently and again slowed harvest efforts in much of the state.

The effects were particularly pronounced in the half-dozen counties that occupy the southeastern corner of Arkansas.

According to the National Weather Service in Little Rock, winds as high as 47 mph were recorded in Drew County, and as high as 48 mph in Jefferson County on Oct. 10.

Most areas in the southeast corner of the state saw 3-4 inches of rain during the 48-hour period beginning Oct. 10. The Bradley County sheriff's office reported a downed power line and other wind damage in Warren.

"Soybeans took a large hit ... as well," he said. "After looking around the county, lots of soybean fields ended up on the ground after 4 inches of rain and high winds. Always a worry this time of year is frequent rainfall holding farmers out of the field and damaging crops the longer they sit out in the field."

While harvest efforts have been a battle for most commodities in the state, cotton growers have seen a particularly tough month. On Oct. 5, the U.S. Department of Agriculture reported that only 13 percent of the state's cotton acreage had been harvested.

The following week offered a ray of hope, however, as producers more than doubled their progress, bringing the harvested acreage to 30 percent of the cotton planted in the state. While still well behind the five-year average of 47 percent for this point in the season, the harvest appeared to be picking up steam.

After Delta came "a pretty good day for cotton and peanut harvest," but then "showers and cloudy weather shut things down again," he said. "We're hoping to be able to start back," Robertson said recently. "We'll need a little extra drying time."

Ryan McGeeney is with the U of A System Division of Agriculture.