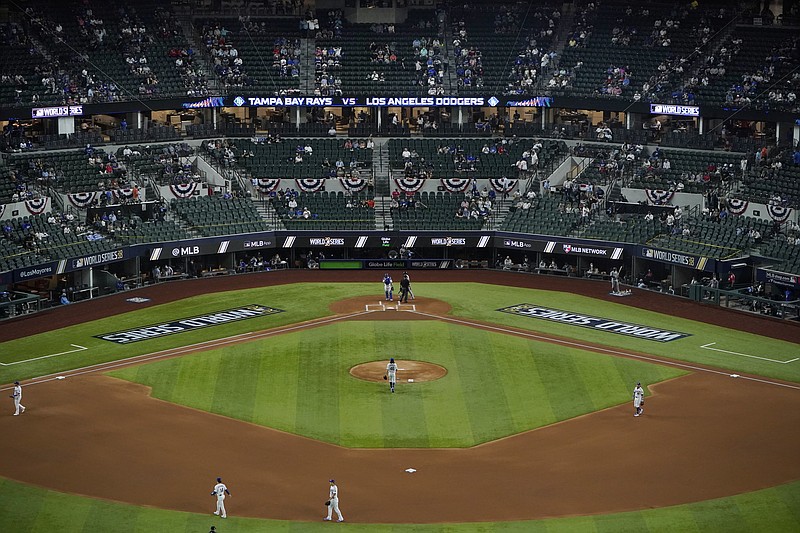 A limited number of spectators watch the Los Angeles Dodgers play against the Tampa Bay Rays during the first inning in Game 2 of the baseball World Series Wednesday, Oct. 21, 2020, in Arlington, Texas. (AP Photo/Sue Ogrocki)

In the midst of a pandemic, one can't be too picky.

Major League Baseball is less than a week away from completing its truncated season, and given the odds it faced at the beginning of this perilous, three-month-long journey, that's quite an accomplishment.

So, we're surely not going to complain about a World Series between teams from opposite coasts being played in a sparsely populated stadium in the heart of Texas.

That said, let's hope this is a one-and-done.

Any thought of transforming the World Series into some sort of Super Bowl-like spectacle -- played in a single city that is chosen years in advance -- should not be part of a much-needed discussion on modernizing the game.

Scott Boras, the most prominent agent in baseball, has been pushing this idea for at least a decade, long before anyone could've envisioned it would become necessary to help navigate through a pandemic.

He brought it up again this week in an interview with The New York Times, coinciding with the start of a World Series between the Los Angeles Dodgers and Tampa Bay Rays that is being played in Arlington, Texas.

When Boras speaks, it's certainly worth listening. He wields enormous influence within the game, and anything he is proposing is surely with a well-honed eye toward increasing revenue.

"We have to be forward-thinking about how we create a game that has attention above all other sports," Boras told the Times. "It's already given us an indication of what the current, traditional approach has provided, and that is that baseball does not receive the attention of the Super Bowl."

No one can deny the Super Bowl is the 800-pound gorilla that dominates the American sporting landscape, and it's mere folly to think the World Series could ever approach its popularity.

But, in Boras' view, that doesn't mean baseball shouldn't at least make the effort. And considering the ratings for the first two games of the World Series were the lowest in history, we'll listen to him a little more.

"Let's create a product that does receive the attention of the Super Bowl," he said, "and let's create something that allows for a World Series week, and brings commerce and corporate interaction and all those things that come to a city for the Super Bowl -- but we can actually deliver four to seven games as opposed to one."

But here's the problem.

By having just one game, the Super Bowl has masterfully created a model that culminates with a huge swath of the nation gathering around their TV sets to watch what has become much more than two teams playing for the title.

A best-of-seven World Series, it would seem, hardly allows enough free time for the sort of extracurricular activities that helped transform the Super Bowl into a de facto national holiday. And one doesn't even know if it will go seven games.

Also, the Super Bowl's most glaring drawback is the lack of crowd atmosphere inside the stadium for the game. The seats are largely doled out as high-priced perks to the league's biggest corporate backers.

Instead of a raucous stadium, the game is usually played before a largely disinterested crowd that seems mostly concerned with being seen at the biggest game of the year rather than who wins.

At a neutral-site World Series, that would only be magnified over a long series.

"I totally understand why they're doing it this season, and it seems to be working well," Tampa Bay Manager Kevin Cash said before Game 3 Friday night. "Saying that, I personally would feel really crummy for our Bay Area fans if we didn't have an opportunity to play games at home."

In this shortened season, baseball gave a test drive to such radical proposals as seven-inning doubleheaders, putting a runner at second base to start extra innings, expanding the playoffs to 16 teams, and adding the designated hitter in the National League.

After initial skepticism, all of those changes have generated such widespread approval that they could be part of the game going forward.

But a neutral-site World Series is not such a Super idea. 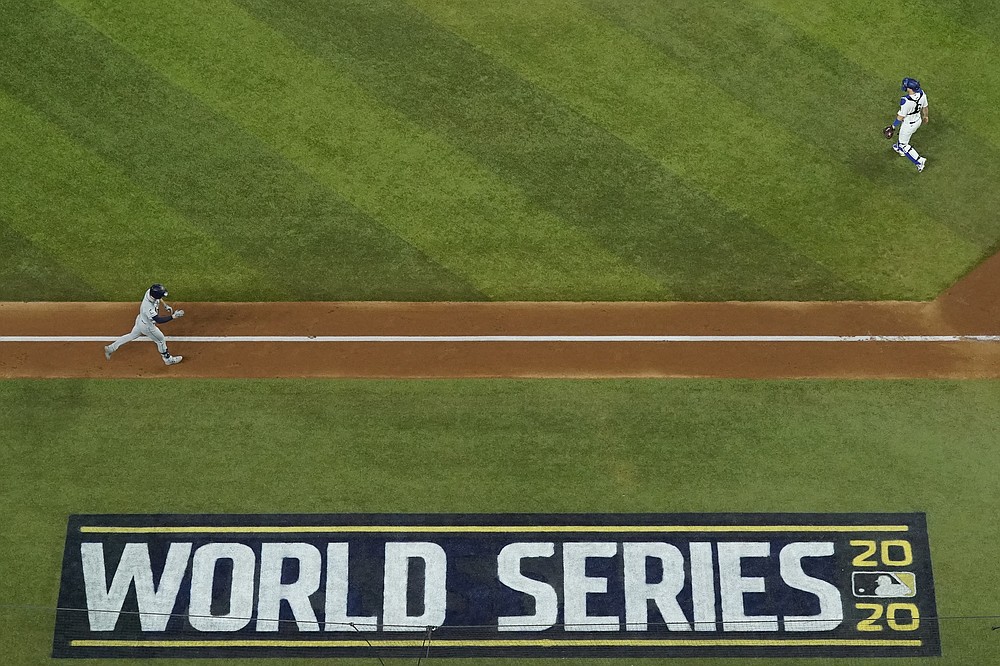 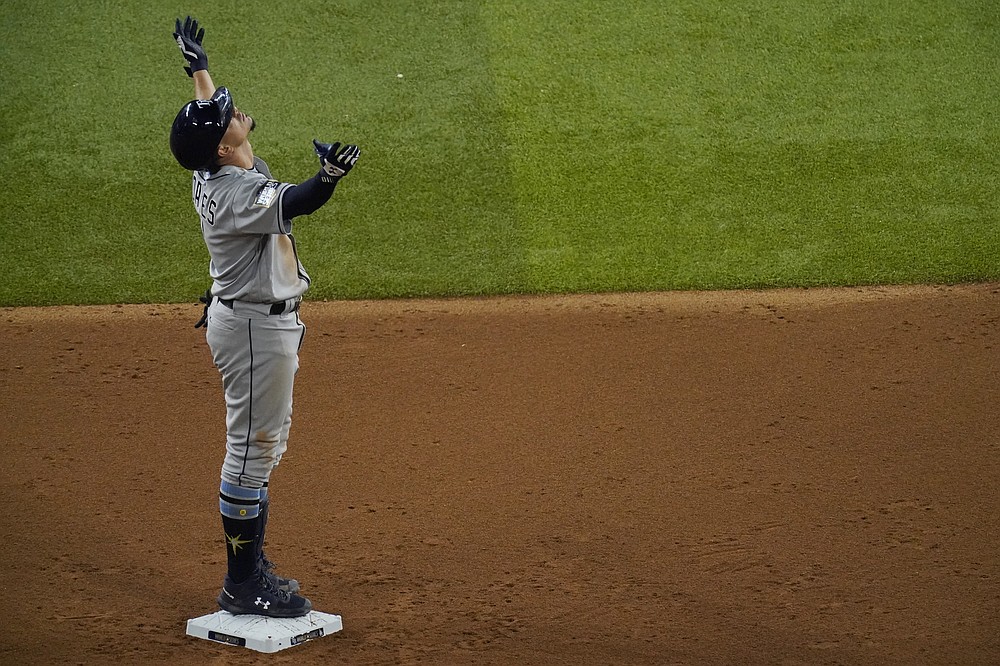 Tampa Bay Rays' Willy Adames celebrates after a double against the Los Angeles Dodgers during the seventh inning in Game 2 of the baseball World Series Wednesday, Oct. 21, 2020, in Arlington, Texas. (AP Photo/Sue Ogrocki) 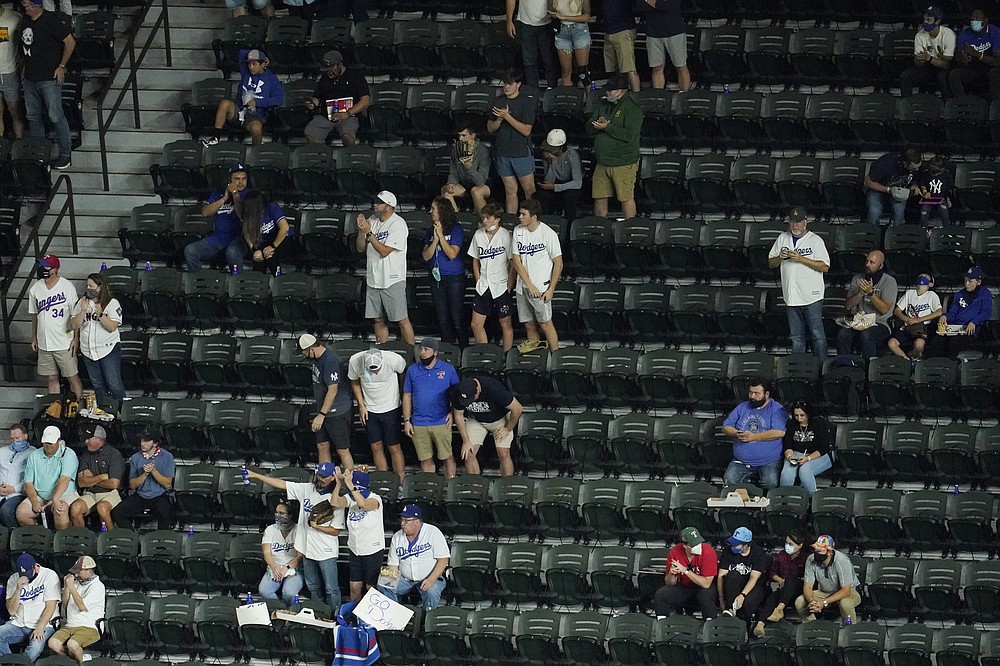 Fans watch during the fourth inning in Game 2 of the baseball World Series between the Los Angeles Dodgers and the Tampa Bay Rays Wednesday, Oct. 21, 2020, in Arlington, Texas. (AP Photo/David J. Phillip) 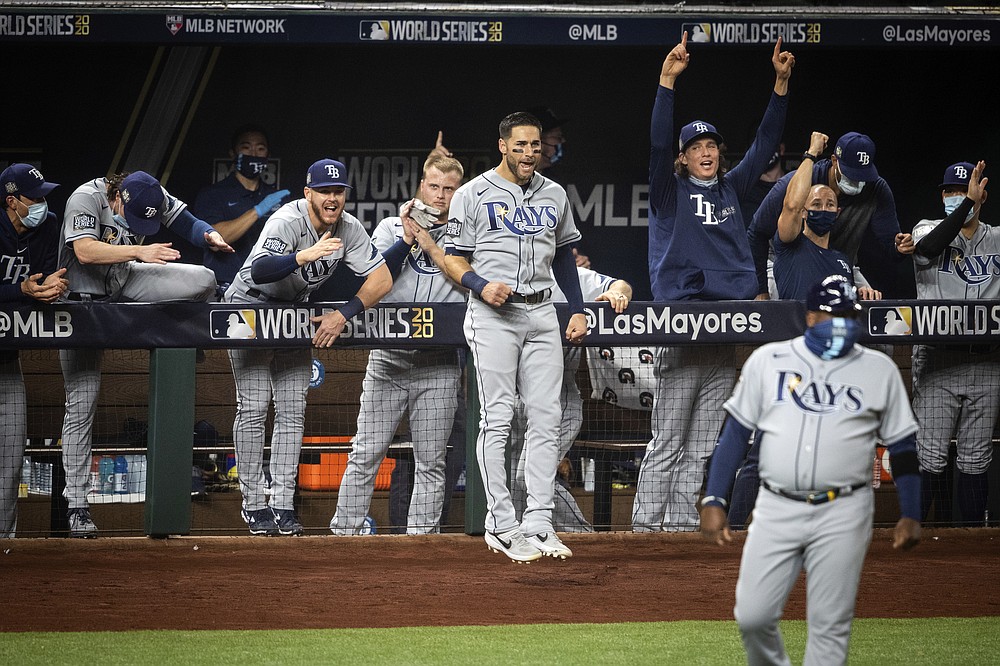 The Tampa Bay Rays celebrate after a home run against the Los Angeles Dodgers during Game 2 of the baseball World Series, Wednesday, Oct. 21, 2020, in Arlington, Texas. (Yffy Yossifor/Star-Telegram via AP) 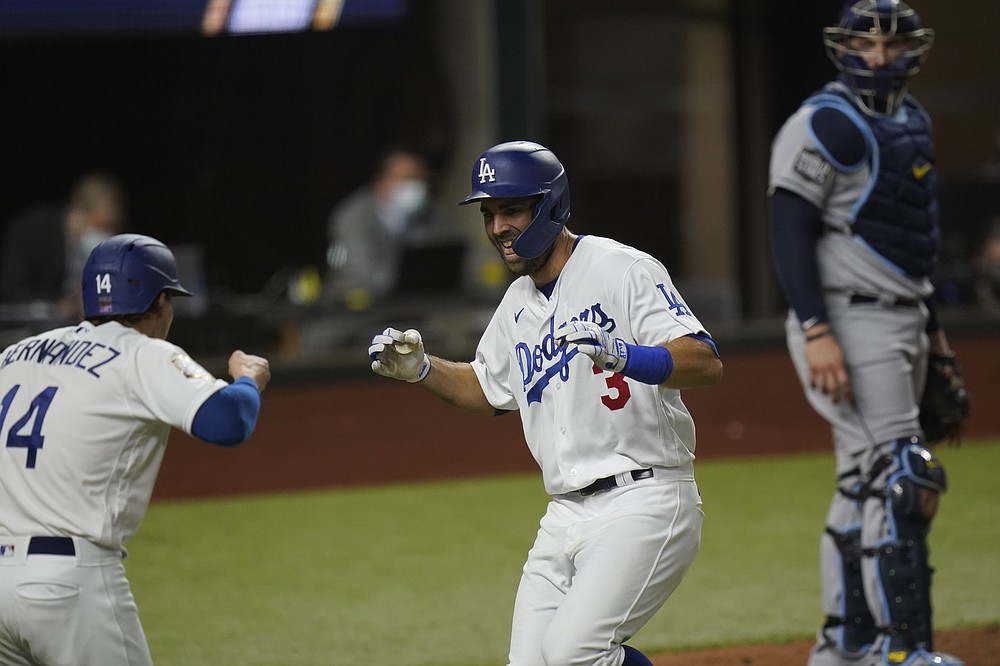 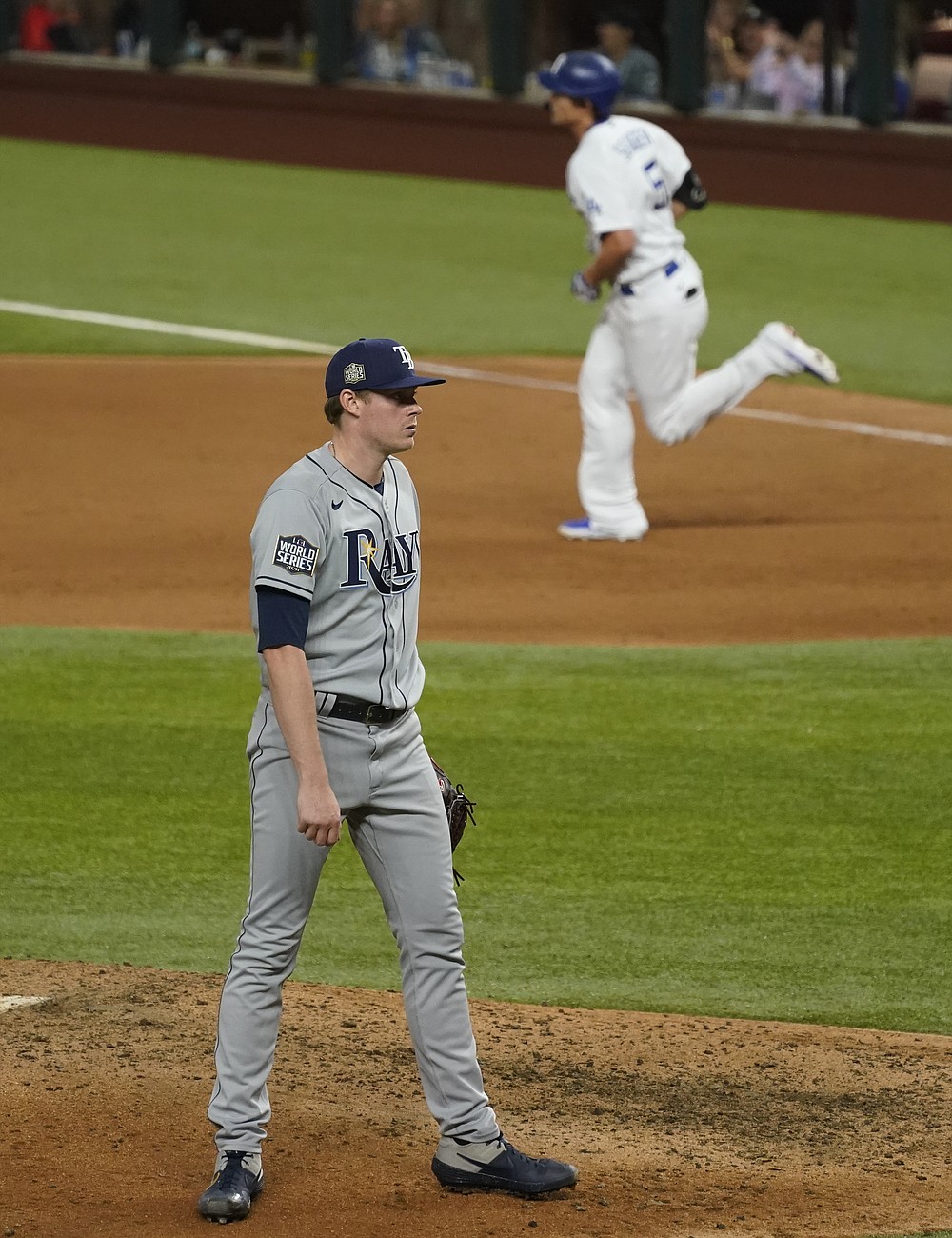 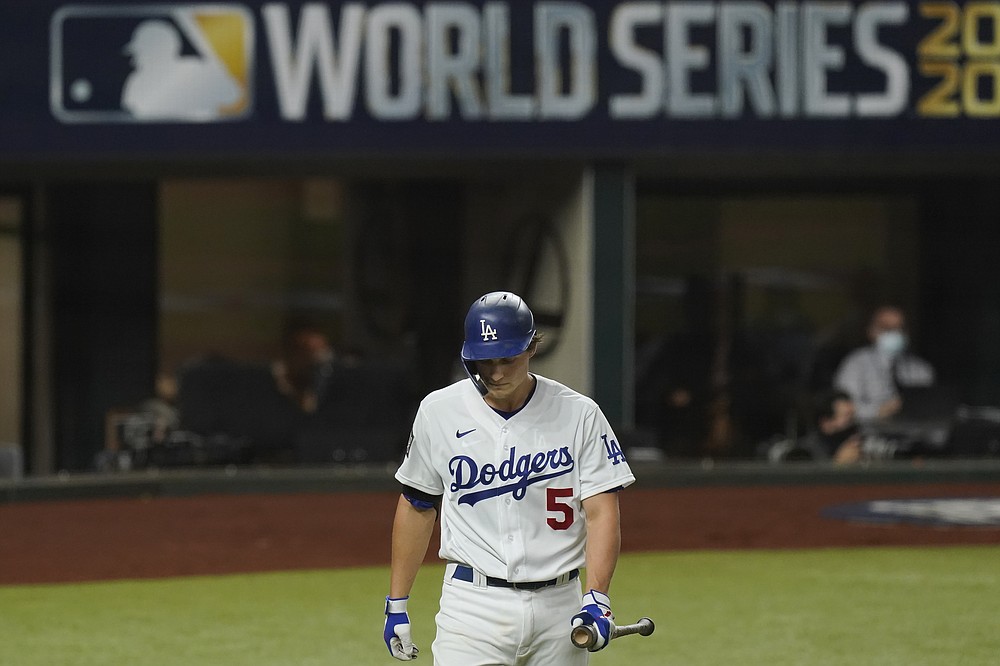