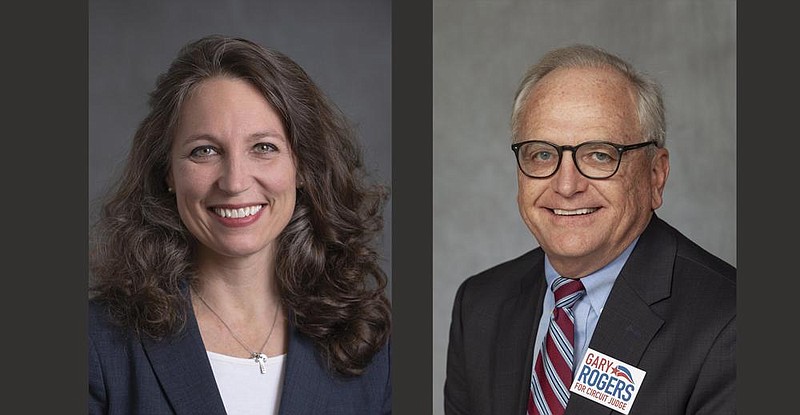 Shown from left are Amy Dunn Johnson and Gary Rogers

LITTLE ROCK -- In Gary Rogers and Amy Dunn Johnson, voters in Pulaski and Perry counties have candidates with different backgrounds to choose from to replace retiring Circuit Judge Richard Moore in the Nov. 3 election.

Moore, 72, a family-court judge first elected in 2002, is one of the six judges in the 6th Judicial Circuit of Perry and Pulaski counties who are retiring. It's the largest turnover on the that bench in at least 18 years.

The official title of the position is Circuit Judge District 06, Division 15, Subdistrict 6.2, and Moore's successor will take over a court that focuses mainly on family law but includes probate and mental health.

Johnson, 46, is executive director of the legal aid program Arkansas Access to Justice Commission and its complementary foundation, which funds the state's two civil legal-assistance organizations, the Center for Arkansas Legal Services and Legal Aid of Arkansas.

A lawyer for 18 years, the Little Rock resident said she has devoted the bulk of her career toward ensuring Arkansas courts work for everyone.

"I've spent more than 11 years working with judges, court staff, attorneys, and those who are representing themselves to improve how the system works for everyone," she said. "I've helped write court rules that make legal representation more affordable for everyday Arkansans and advocated for initiatives to improve health, co-founding Harmony Health Clinic and advising on the creation of the state's first medical-educational-legal partnership."

Johnson said she will bring two important qualities to the bench, an interest in innovation to make the court process more accessible and the experience of someone who's had to appear before the bench herself.

"When covid-19 struck, the need for courts to modernize became quickly apparent, and most courts have adapted with broader adoption of e-filing and remote video appearances," Johnson said. "Still, there is a lot more that can be done to make the process faster, easier, and more transparent. I am eager to utilize new technologies and new processes to accomplish this.

"I'm also a single mom of three school-age girls and a volunteer guardian for a developmentally disabled adult, so I have personal experience with family court and the life-changing impact of the decisions that judges make."

In a career that has seen her work in the private and public sectors, with clients ranging from large hospitals to litigants too poor to pay a lawyer, Johnson said she's developed communication skills that bridge barriers.

"I am adept at meeting people where they are," she said. "A successful judge should be empathetic and culturally competent in order to ensure that people who come to court and are struggling with disabilities, limited literacy, generational poverty, or other social disadvantage still have a meaningful opportunity to get their legal problems solved. Judges cannot be advocates for one side or the other, but they can level the playing field by using plain language, by explaining court rules and procedures, by asking questions, and by listening."

Johnson has contributed to programs that address racial disparities and promote legal service in the rural communities. She's been recognized nationally for her efforts to take free health care to poor, uninsured residents of Pulaski County through the Harmony Health Clinic, and has been recognized by the Bowen School of Law as an outstanding alumni.

Rogers, 63, is a member of Dover Dixon Horne firm in Little Rock where he has been an award-winning "Best Lawyers" family-law attorney as recognized by his peers for several years.

"My passion for helping families stems from my dedication to always put children first," he said. "As family-court judge, I will always ensure children are the priority and will hold parents accountable for the well-being of their children."

Rogers of North Little Rock said his 21 years as a Prairie County district judge in Hazen give him "unmatched" experience for not merely working in a courtroom but also the skills to manage one.

"My experience in hearing countless cases in the courtroom sets me apart as a candidate because it has provided me insight to know how to best serve the people who come into the courtroom," he said. "I understand the importance of listening and holding people accountable, while making decisions that are the most appropriate for each individual involved. As district court judge, my reputation was that I was always fair and worked to protect innocent victims."

That experience further translates into another important attribute, patience, he said. Coupled with empathy, patience can be a judge's most important asset in a legal field that regularly becomes a crucible of emotion.

"Emotions can run high in family cases, so I believe one of my greatest personal attributes is my ability to ascertain the truth amid those emotions and family accusations," he said. "I believe that my ability to listen, be patient and empathize with these families helps me identify all underlying issues, allowing me to make the best decisions or recommendations for everyone involved and to always remember that those decisions will impact every family member for a lifetime."

Rogers, who's served as a special Supreme Court justice by gubernatorial appointment, said his life's ambition is to follow the example set by his father, who ran their family owned grocery store in Hazen. It was a life lesson in compassion and fairness.

"I watched him make a real difference in his customers' lives by serving his community," Rogers said. "I strive to serve my own clients in a similar way. My desire to work with families and use my experience, knowledge and resources to help them and their children is a lifelong passion that I try to apply in both my professional and personal life."

The married father of two said he's also been influenced by his years of coaching youth baseball, football and basketball.

"That has given me invaluable insight about life and how one person can have a positive impact on a young person's life," he said. "When children are having problems or struggling with family issues, the influence you can have on a child's life can truly be life-changing for them, so I tried to bring as much encouragement, support and positivity to the children I coached -- to benefit them during the game or in their personal lives."

Arkansas judicial candidates compete in nonpartisan races that are decided in March elections, unless no candidate wins a clear majority.

Johnson and Rogers are in a runoff because they were the top-two vote-getters in the original race, a three-way competition that saw Johnson capture about 49% of the vote to Rogers' 29%. The third-place finisher was Jay Shue, the former Arkansas Medicaid inspector general, who received about 22% of the balloting.

Rogers said he is not looking at the current race as an attempt to come from behind but rather an opportunity to educate voters about why his experience makes him the superior candidate.

"My strategy for this election is to ensure voters are aware of the depth and breadth of my experience in family law and as a district court judge," he said. "I also want them to know my personal ideals and the priorities that I value in my career -- for myself and for those whom I serve."

Receiving the most ballots does not mean Johnson can rest on her 7-month-old laurels, she said, especially because meeting voters in person is so difficult during the pandemic.

She said she's attracted a broad base of support that includes retired judges, Supreme Court justices, community and faith leaders and former lawmakers but that she can't take a chance that her judicial race will be overlooked.

"I'm fortunate to have a dedicated base of volunteer support, and their efforts have allowed me to maintain and expand my reach through email, social media, and online events, as well as phone calls, postcards, and contactless canvassing," she said. "For nonpartisan races in particular, direct contact is crucial to winning the support of voters who might otherwise overlook judicial candidates."

According to the latest figures from the secretary of state's office, Johnson has topped Rogers in donations but he has substantially outspent her.

Johnson reports $115,369 in contributions with expenditures of $80,551. Her five largest contributors are William Johnson and Graham Catlett with $2,800 apiece, followed by Suzanne Dunn with $2,000, then Dustin McDaniel and Jim Dunn, each with $1,500, according to the office.

Six of the circuit's most experienced judges are retiring from the 17-member bench this year, five of them because of a 55-year-old law that requires circuit judges who are elected after reaching age 70 to give up their retirement benefits.

There's a lot at stake for judges who must serve eight years before becoming vested. Judges are required to pay 5% to 6% of their pay into the program, which is complemented with a 12% contribution from the state. Full vestment takes 25 years and can result in an annual payout of 80% of annual salary.