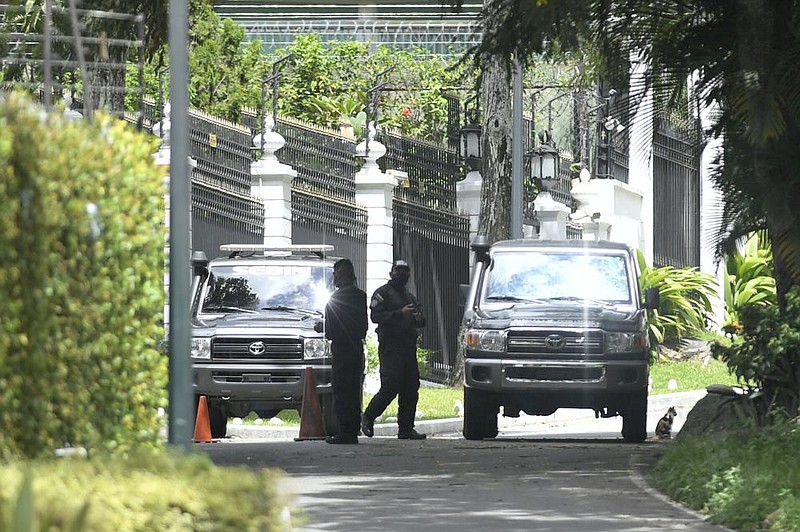 Members of the SEBIN intelligence police guard the perimeter Saturday of the Spanish ambassador’s residence in Caracas, Venezuela, where opposition leader Leopoldo Lopez had been a guest after participating in a failed military uprising. (AP/Matias Delacroix)

The 49-year-old former Caracas-area mayor has been holed up at the ambassador's residence since a failed military uprising he led in April 2019 aimed at ousting President Nicolas Maduro. He has been jailed, under house arrest or in a foreign embassy refuge for nearly seven years.

In a statement from Popular Will, the party Lopez founded, leaders confirmed he had left the country to continue his work from abroad in a decision they deemed "best for the country and the fight for Venezuela's freedom."

"After seven years of persecution and unjust imprisonment inside Venezuela, Leopoldo Lopez is still not totally free, like all Venezuelans, so long as there exists a dictatorship that violates the human rights of the people," the party said.

It is unclear how Lopez left the ambassador's residence, given the heavy state security presence permanently stationed outside the property. Travel by land has grown increasingly difficult because of widespread fuel shortages. Filling up a vehicle with gas can take hours if not days, and checkpoints manned by security forces have proliferated across the country.

In a message directed to Maduro on Twitter, U.S.-backed opposition leader Juan Guaido said his political mentor had gotten out of Venezuela by "evading your repressive apparatus." He added that Lopez's efforts to remove Maduro would continue from abroad as part of the opposition strategy to garner international support.

There was no immediate reaction from Venezuelan authorities.

Lopez was sentenced in 2015 to nearly 14 years in prison after being convicted of inciting violence during anti-government protests in which three people died and dozens were wounded. He was released from prison and placed under house arrest after more than three years in a military jail.

Even from his confines, Lopez has remained an influential figure in Venezuela's opposition, advising Guaido, who claims he is the country's interim president because Maduro's 2018 reelection was not legitimate.

But after drawing tens of thousands of people to the streets last year, the opposition has struggled to regain momentum. Maduro remains firmly in control of the nation's military and nearly all other government institutions.

Lopez's flight is likely to be held up by the government as a trophy as it prepares to retake control of the National Assembly in December legislative elections that Guaido has vowed to boycott. Lopez had long stubbornly refused to leave even when his wife and children fled to Spain last year.

He joins dozens of anti-government politicians who have fled Venezuela over recent years, many leaving covertly to avoid potential persecution or jail time.

"It's probably the clearest sign that the continued opposition effort to unseat Maduro has floundered that a committed stay-in-Venezuela leader like Lopez has chosen to finally leave," said Raul Gallegos, a Colombia-based analyst at Control Risks consultancy.

Lopez pursued a strategy in 2014 known as "The Exit," consisting of street protests months after Maduro was elected. The strategy failed and ultimately divided the opposition. That combativeness led to his arrest and conviction on insurrection charges branded a sham by human rights groups.

His hard-line stance, backed by Washington, ultimately came to dominate the fractious opposition, which rallied behind Guaido. A follower of Lopez, he had become congressional president and is now recognized by more than 50 countries as Venezuela's rightful leader.

The years Lopez spent at a military prison, during which he read the works of Nelson Mandela and kept up a rigorous exercise regimen, solidified his image as a man willing to risk his own skin to rid the country of Maduro.

He sought allies among his former jailers in the military, and in 2019 reappeared on a highway overpass with a small band of national guardsmen calling for an uprising against Maduro. The putsch was easily quashed, and Lopez took refuge in the ambassador's residence.

Since then, Lopez has struggled to maintain the same leadership. While Guaido named him his Cabinet chief, many in the opposition coalition, envious of his influence in Washington, sought to quietly undermine him, accusing him of having a messiah complex and failing to build consensus.

His departure comes just days after Spain's Ambassador Jesus Silva -- who has been the dean of Caracas' dwindling diplomatic community -- was recalled by Spain's leftist government to Madrid after serving for four years.

Silva, a career diplomat, was a firm backer of Lopez. But as a holdover from previous Spanish administrations who was once expelled by Maduro, he was less effective an interlocutor when Spain's socialist government took power.

Even as his whereabouts remained unknown, some opposition leaders were praising Lopez's decision to flee.

"We await you in the diaspora to continue fighting for the freedom of all of Venezuela," said Antonio Ledezma, a former Caracas mayor who himself fled in a risky trek by land out of the nation in 2017 after being briefly jailed on charges of plotting to oust Maduro. 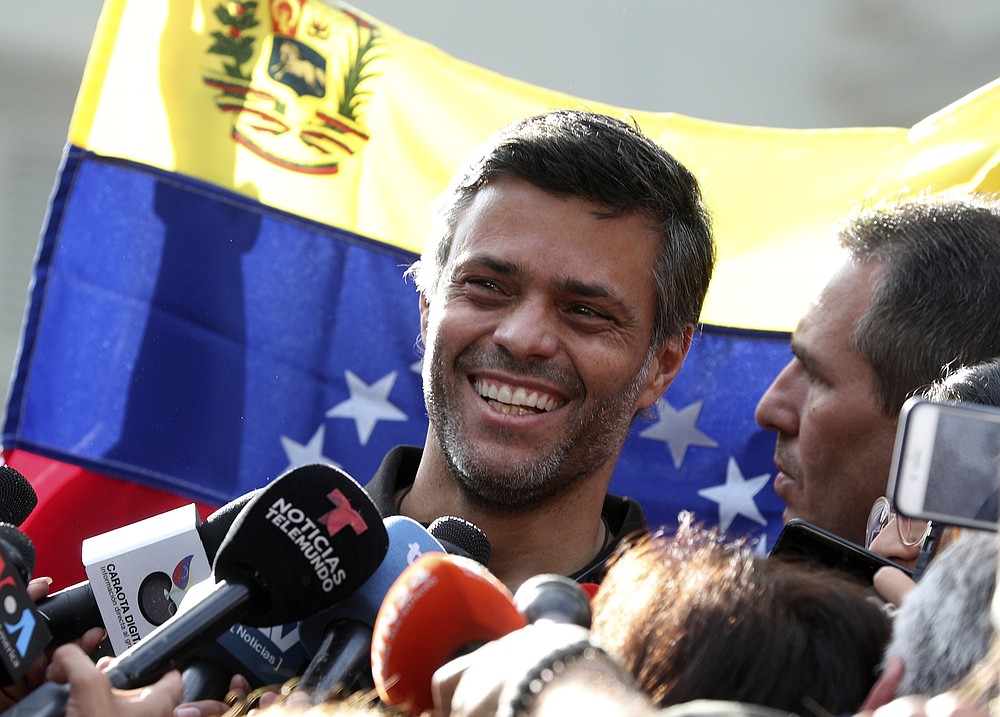 FILE - In this May 2, 2019 file photo, Venezuelan opposition leader Leopoldo Lopez smiles during a press conference at the gate of the Spanish ambassador's residence in Caracas, Venezuela. Lopez left the residence where he had been a guest since April 30, 2019 and is leaving Venezuela people close to the opposition leader said on Saturday, Oct. 24, 2020. (AP Photo/Martin Mejia, File)
ADVERTISEMENT