Murkowski says she will vote for high court nominee by LISA MASCARO AND MARY CLARE JALONICK THE ASSOCIATED PRESS | October 25, 2020 at 3:49 a.m. 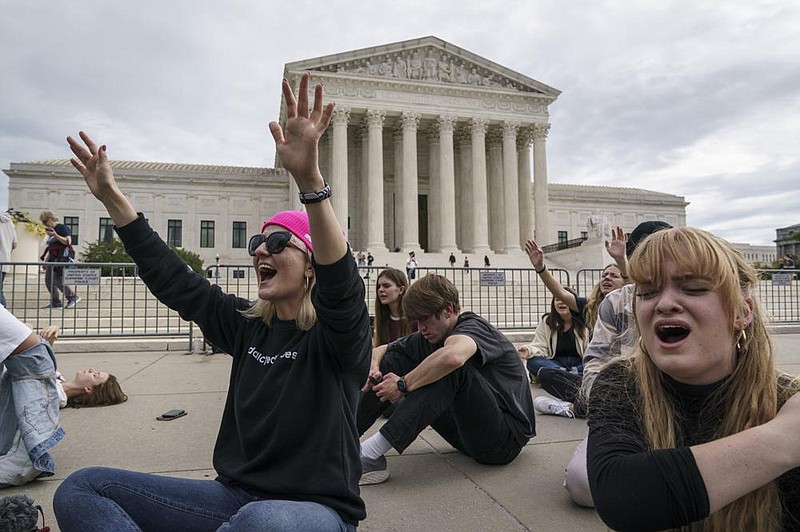 Evangelical Christians pray Saturday outside the Supreme Court in Washington as Republicans in the Senate work in a rare weekend session to advance the confirmation of Judge Amy Coney Barrett for the high court. More photos at arkansasonline.com/1025barrett/ (AP/J. Scott Applewhite)

Sen. Lisa Murkowski, R-Alaska, said during Saturday's session that while she opposed her party's decision to push ahead with the nomination process so close to the Nov. 3 presidential election, she supported Barrett's confirmation.

Barrett already appeared to have enough votes for confirmation from Senate Republicans who hold the majority in the chamber. But Murkowski's nod gives her a boost of support. Only one Republican, Sen. Susan Collins of Maine, is now expected to oppose the conservative judge.

"While I oppose the process that has led us to this point, I do not hold it against her," Murkowski said.

Democrats mounted more procedural hurdles during the day, but the party has no realistic chance of stopping Barrett's advance. Barrett, a federal appeals court judge from Indiana, is expected to be confirmed Monday and quickly join the court.

"Our recent debates have been heated, but curiously talk of Judge Barrett's actual credentials or qualifications are hardly featured," McConnell said. He called her one of the most "impressive" nominees for public office "in a generation."

Democrats call the fast-track confirmation process so close to a presidential election a "sham" and say the winner of the election should name the nominee to fill the vacancy left by the late Justice Ruth Bader Ginsburg.

Democratic leader Chuck Schumer of New York warned Republicans that the only way to remove the "stain" of their action would be to "withdraw the nomination of Amy Coney Barrett until after the election."

But Republicans countered that they were taking as much time on Barrett's nomination as the average for Supreme Court confirmation. Sen. John Cornyn, R-Texas, dismissed the stall tactics as "frivolous."

With the nation experiencing a surge of covid-19 cases, Democrats were expected to force a series of votes on coronavirus relief legislation, including the House-passed Heroes Act that would pump money into schools, hospitals and jobless benefits and provide other aid.

Majority Republicans were expected to turn aside the measures and keep Barrett's confirmation on track, which would lock a 6-3 conservative majority on the court. Senators planned to stay in session Saturday and today.

Barrett, 48, presented herself in public testimony before the Senate Judiciary Committee as a neutral arbiter of cases on abortion, the Patient Protection and Affordable Care Act, and presidential power -- issues soon confronting the court. At one point she said "it's not the law of Amy."

Trump said last week that he is hopeful the Supreme Court will undo the health law when the justices take up a challenge to it Nov. 10.

At the start of Trump's presidency, McConnell engineered a Senate rules change to allow confirmation by a majority of the 100 senators, rather than the 60-vote threshold traditionally needed to advance high court nominees over objections. With a 53-47 GOP majority, Barrett's confirmation is almost certain.

Sen. Lindsey Graham, the chairman of the Senate Judiciary Committee, acknowledged the partisan nature of the proceedings but said he could not live with himself if the Senate failed to confirm someone he said was such an exceptional nominee. Graham, R-S.C., called Barrett a "role model" for conservative women and for people with strongly held religious beliefs.

Democrats said Barrett would undo much of what was accomplished by liberal Justice Ginsburg.

Barrett was a professor at Notre Dame Law School when she was tapped by Trump in 2017 for an appeals court opening. Two Democrats joined at that time to confirm her, but none is expected to vote for her in the days ahead.

Information for this article was contributed by Meg Kinnard and Becky Bohrer of The Associated Press. 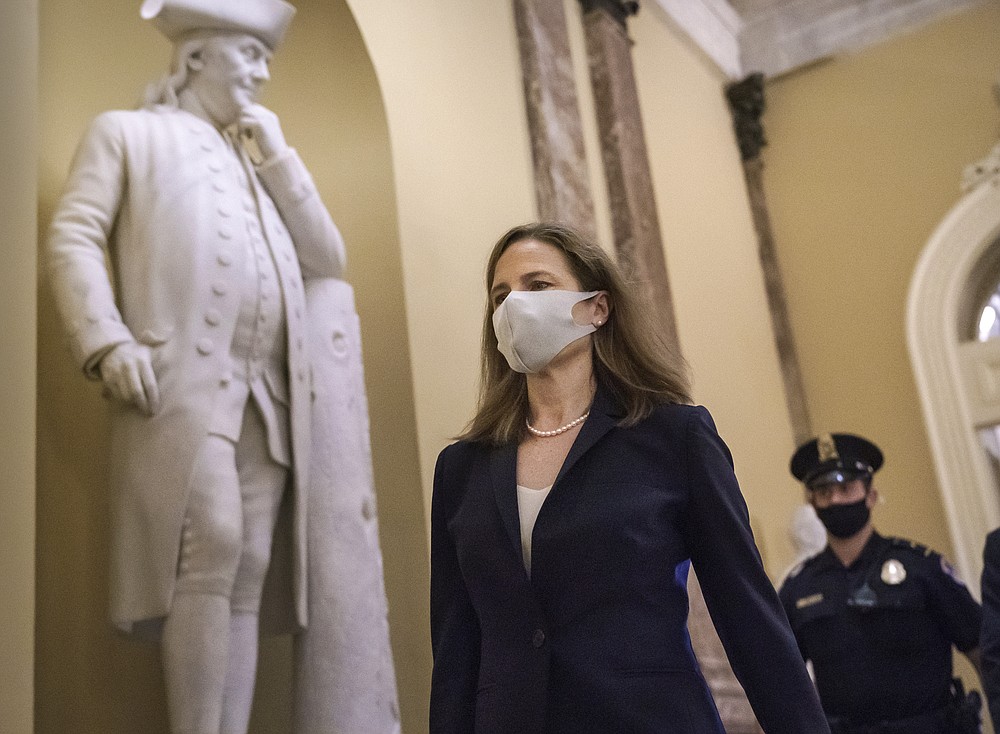 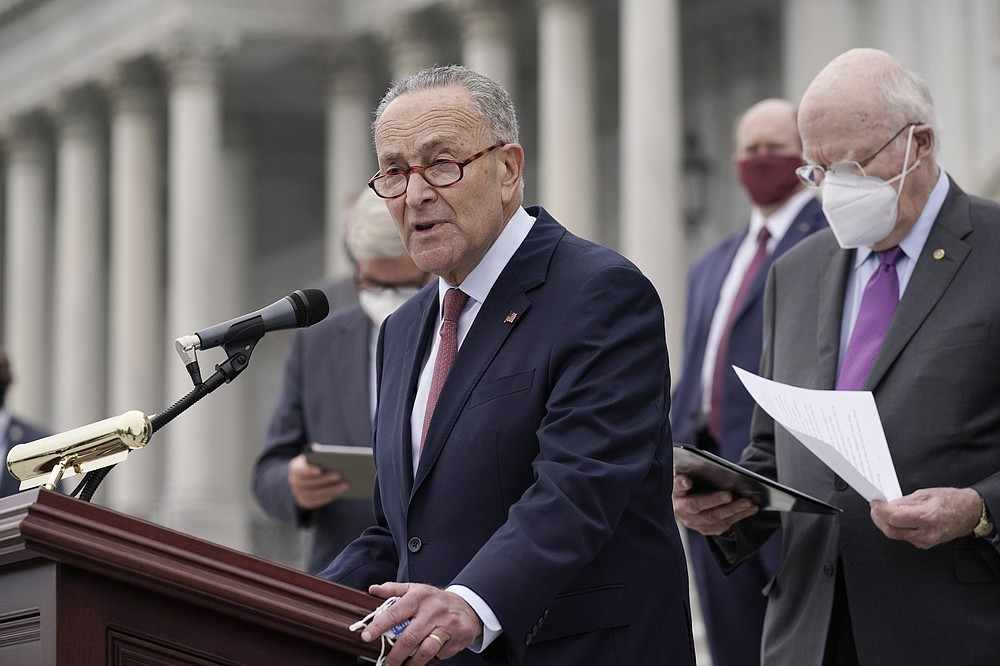 Senate Minority Leader Chuck Schumer, D-N.Y., and Democratic members of the Senate Judiciary Committee hold a news conference after boycotting the vote by the Republican-led panel to advance the nomination of Judge Amy Coney Barrett to sit on the Supreme Court, Thursday, Oct. 22, 2020, at the Capitol in Washington. (AP Photo/J. Scott Applewhite) 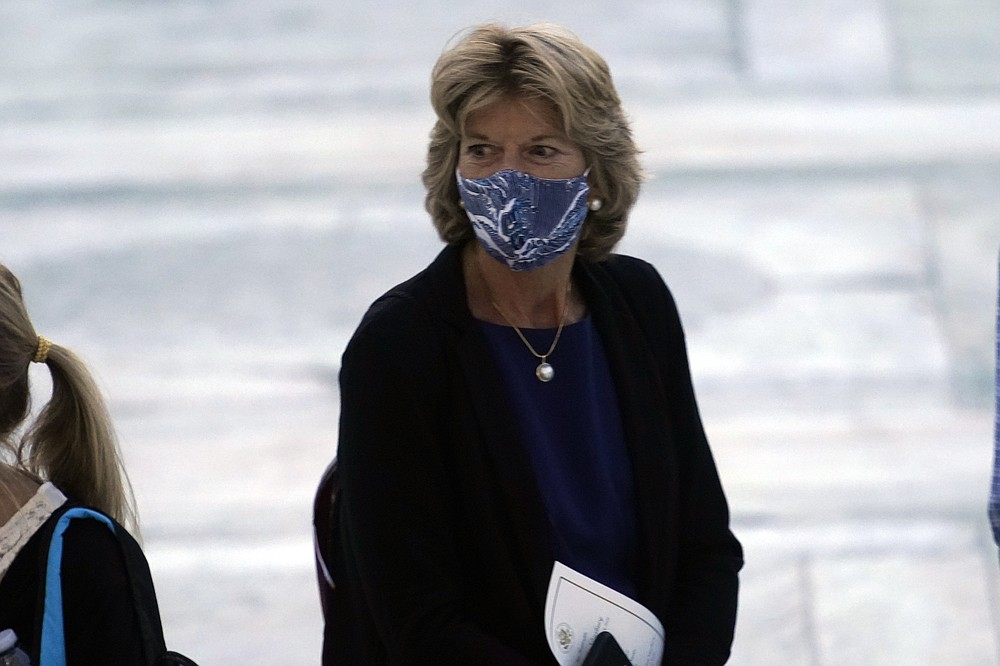 Sen. Lisa Murkowski, R-Alaska, pays respects as Justice Ruth Bader Ginsburg lies in repose under the Portico at the top of the front steps of the U.S. Supreme Court building on Wednesday, Sept. 23, 2020, in Washington. Ginsburg, 87, died of cancer on Sept. 18. (AP Photo/Andrew Harnik, Pool)
ADVERTISEMENT