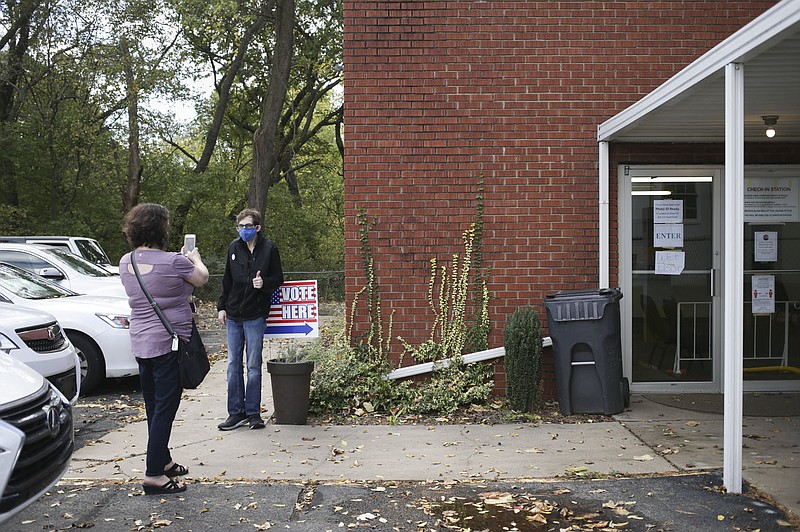 Nicole Brown of Roger takes a picture of Caleb Brown after voting, Thursday, October 21, 2020 at the Sunnyside Baptist Church in Rogers. "I mostly wanted to make sure my vote counted," said Nicole Brown. "I was going to do absentee but with everything going on with USPS and the mail system, I decided to vote in person." Check out nwaonline.com/201022Daily/ for today's photo gallery. (NWA Democrat-Gazette/Charlie Kaijo)

No election is flawless, and holding a vote during a pandemic comes with a raft of considerations, but two counties in Northwest Arkansas are pulling it off pretty well, according to watchdog groups and people at the early-voting stations.

So far in Washington and Benton counties, the closest comments resembling complaints have come from voters who in previous years escaped the Election Day crowds by voting early. Now, they're having to stand in line.

But, at least the lines move, early voter Jerry Blakemore of Prairie Grove said Tuesday while waiting at the fire station to cast his ballot.

"Typically, there's less of a line, but I just want to get in and get it done," he said.

Voters are taking precautions and changing their patterns this year in ways they never imagined they'd do before the pandemic.

Springdale voter Jodi Vanbecelaere said that as a mother of a small child, she has to vote whenever she gets the chance. She voted Tuesday.

She said she probably wouldn't have had the time to go to campaign events or take advantage of other opportunities to meet the candidates, even without the pandemic. So the fact that such events were scarce this election season didn't affect her much. Instead, she sought out information about local candidates online.

Two other voters -- Victoria Kimbell and Nancy Bostian, both of Springdale -- said they go the polls early every election. They noted little difference in the process this year compared with the past, other than the obvious virus precautions such as plastic panels between voters and poll workers, and everyone wearing masks.

Mask use was nearly universal among voters at polling sites in Benton and Washington counties. One voter seen leaving a polling site in Fayetteville without a mask said he wore it while voting and pulled it down to his chin only when leaving.

Bostian said she did have concerns about voting in person. "My father was in two wars, World War II and Korea," she said. "He always told us it was very important to vote." That helped her overcome her covid fears and cast her ballot, she said.

"I'm just so tired of all the hubbub," she said. "I'm tired of the negativity" of elections this year.

For some voters, casting ballots in person was a precaution.

Donna Scott of Rogers and other voters interviewed said they were casting early and in person so they could straighten out on the spot any problem. They didn't want to risk their ballots being tossed by voting absentee, they said.

Scott researched candidates online before deciding who to support, she said.

On Thursday, Tom Sauer cast his first ballot in Arkansas, having moved here from Texas in January. He said he was impressed at how easy it was to vote early.

Normally he doesn't vote early, he said. "I wanted to make sure I got to vote this year, and there's just so much confusion over absentee voting," with some political groups claiming it is fine and others saying it isn't. Voting in person seemed the best way to avoid any error and any possibility of fraud, he said.

"The only thing that threw me was my state representative's race," Sauer said.

The House District 96 race was the subject of a Benton County Election Commission meeting Thursday and again Friday. An unopposed special election to fill an unexpired term was on the electronic ballot with no notice of it being a special election. It appeared alongside the contest for the same seat to be filled full term.

The commission had placards on voting machines in English to try to explain the situation. On Friday, it decided to add placards in Spanish.

Enrique Murillo of Rogers, a first-time voter, said he considered voting absentee by mail but decided to vote at election commission offices in his city, instead.

"I thought that if my signature, for instance, was off by just a little bit, my [absentee] ballot could be thrown out," he said of the matching signature verification process. "So, I thought the secure way to do it" was to vote in person.

State members of the Democratic and Republican parties are monitoring the voting and fielding voter complaints, spokesmen said.

Few complaints are coming in so far, spokesmen for both parties said.

On Friday, state Democratic Chairman Michael John Gray announced that a help line had been set up for Spanish speakers so that anyone, regardless of political preference, could call to report problems.

Most of the more than 300 calls to that help lines have been people asking questions before going to vote, said Hannah Burdette, a voter protection specialist for the state Democrats. She said a few complaints have involved people with disabilities having difficulties accessing polling sites around the state.

Seth Mays, a spokesman for state Republicans, said in an email Friday: "We continue to receive calls around the clock from voters all across the state, but still have not received any calls outside of ordinary election questions."

Mireya Reith of Fayetteville -- founder of the nonprofit Arkansas United, an immigrant advocacy group -- said election officials in the region and in Washington County, in particular, are to be commended for efforts to get bilingual poll workers for Spanish speakers and Marshall Islanders.

So far, the group has not seen any problems with voting at polls, she said. 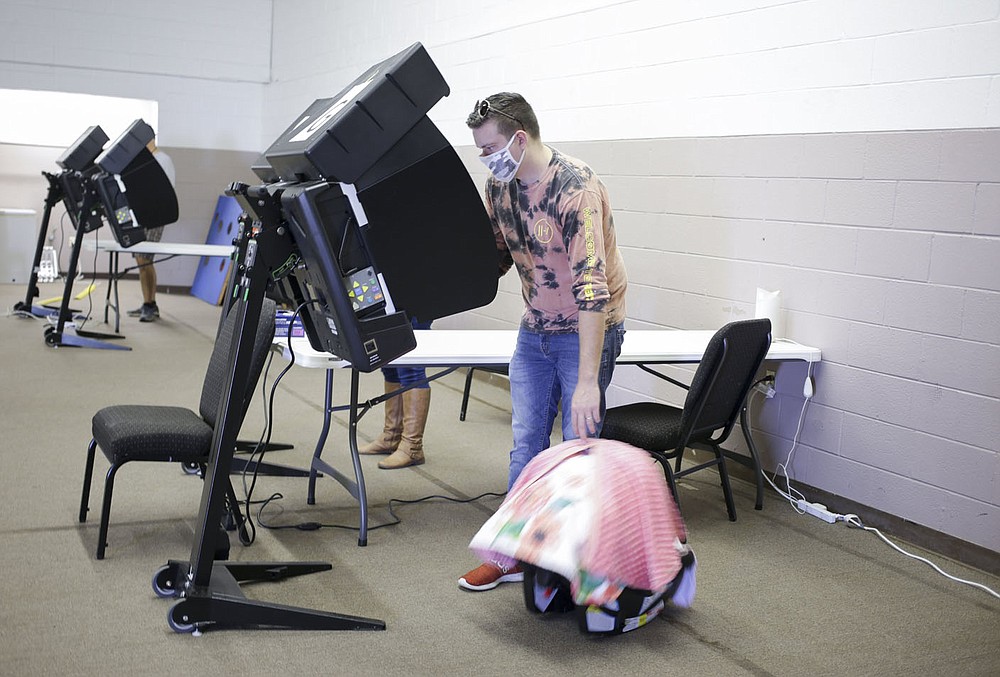 Kyler Woodell of Rogers rocks his six-week old baby while voting, Thursday, October 21, 2020 at the Sunnyside Baptist Church in Rogers. "I just kind of figured we'd avoid the hazard of voting on November 3rd," he said. Check out nwaonline.com/201022Daily/ for today's photo gallery. (NWA Democrat-Gazette/Charlie Kaijo) 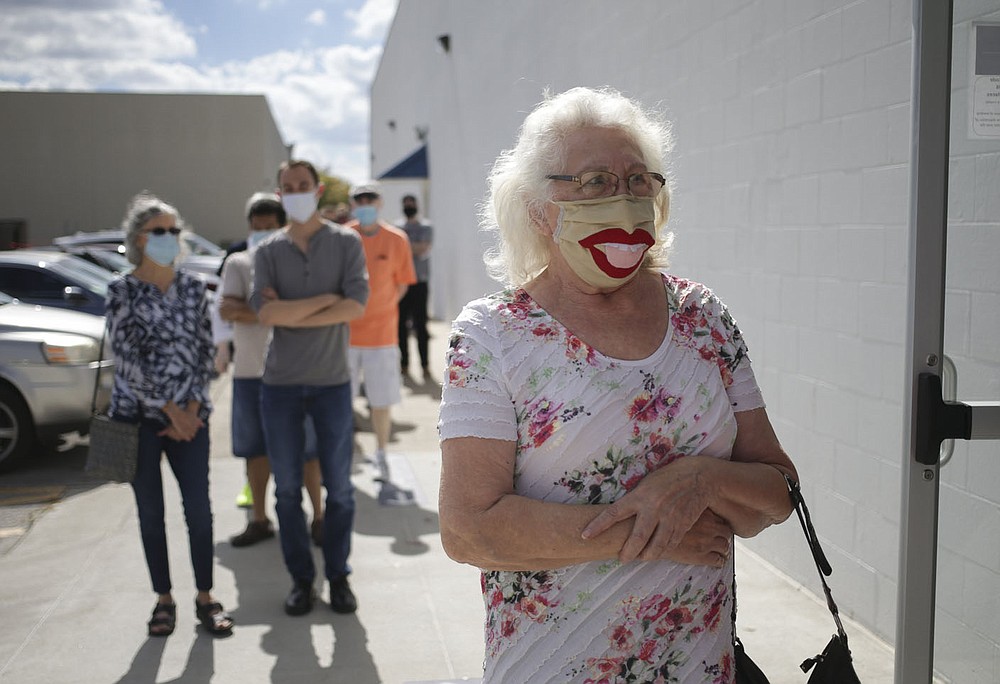 Both the state’s major parties say their voter help lines are open for all callers, despite their political preference: