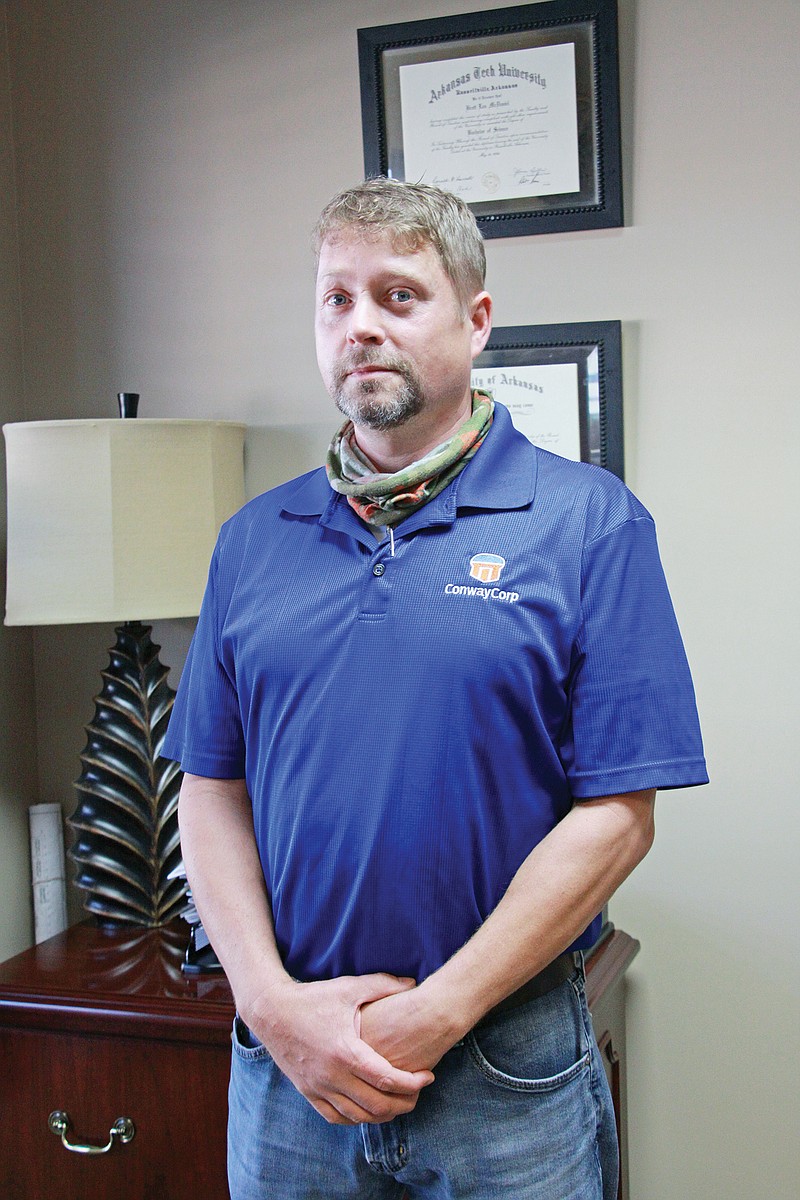 Brett McDaniel is the new president for the Conway Kiwanis Club. He has been with the club for 14 years, but this is the first time he has served as president. He replaces former President Amanda Horton. ( Sam Pierce)

CONWAY — The core value of the Conway Kiwanis Club is to serve the children in the community. In years past, the club did this by providing Breakfast With Santa, donating money to the Boys & Girls Club of Faulkner County or sending food baskets to families in need at Christmastime.

“It does a look a little bit different now, but service in the community is important to me,” said Brett McDaniel, newly elected Kiwanis Club president. “Our mission is to simply serve the children in the community, and we are going to find ways to do exactly that.”

He did say that as of now, the club is still planning to host Breakfast With Santa in December, but with social distancing and certain guidelines in place. He said the Kiwanis are currently looking at doing photos with Santa with benches on either side of him and allowing cars to drive up and let children get their photo taken with Santa. McDaniel said club members also want to provide food boxes for those in need. The club may have fewer resources to distribute boxes this year because it has not been able to hold fundraisers, but members are still making plans for this annual contribution to the community.

McDaniel began his term as the newly elected president of the Conway Kiwanis Club at the first October meeting. He has been with the club for 14 years, but this is his first time to serve as president. He said that in almost 100 years of the club’s existence, no one has been president more than once.

“I am pleased to have this opportunity to serve at this capacity,” McDaniel said. “We have a pretty strong club here in Conway with almost 100 members, and for a civic club in a town like Conway, that is a pretty good membership.”

The club meets in person at noon every Wednesday at Larry’s Pizza in Conway and virtually through Zoom. As a result of COVID-19 guidelines, in-person attendance is limited to 35 people, and everyone is properly spaced and masked.

“We do ask our members to RSVP for the meeting, and we limit the number of people at the facility,” he said.

McDaniel first got involved with the Conway Kiwanis Club in 2006 when he was working for Garver. He said that on Wednesdays, he would volunteer at Arkansas Children’s Hospital. He currently works as the manager of engineering and planning for Conway Corp.

Crystal Kemp, chief marketing officer for Conway Corp and a member of the Conway Kiwanis Club, has known McDaniel since he came on staff. She said he has been an officer in the club, served on the board and was named Kiwanian of the Year in 2009.

“He is very dedicated to the club and takes it very seriously and provides some good direction for his team,” Kemp said.

After joining the Kiwanis in 1994, Kemp served as club president in 2000 and said she and McDaniel had a discussion at the beginning of the month about what he should expect in his new role.

“He has done that with a lot of the former presidents,” she said. “He set his goals for the year and what he would like to accomplish, and he has looked at [past presidents’] involvement and what they had in mind for the club.

“However, we are in a club year unlike any other. … It is a completely different time than any of us have experienced.”

Kemp’s role with the club is to help coordinate and assist those who are using Zoom to attend the club’s meetings. She said the first couple of weeks were kind of tough, as a lot of people were in the early stages of understanding the process, “but now everybody has caught on really well.”

“It has given us a great way to keep people connected,” she said. “We have been meeting back in person for about a month, but from March to September, we met through Zoom. … We try to make it really interactive, with things like Kiwanis trivia, no matter who is on those meetings.”

She said one bonus of having the meetings through Zoom is that it has allowed members who couldn’t make it to the meetings in person because of their jobs to be able to attend.

“It has ended up being a really good thing for us,” she said.

McDaniel grew up and attended high school in Millington, Tennessee. He went to Arkansas Tech University in Russellville and earned a bachelor’s degree in engineering in 1994. In 2004, he received a master’s degree in operations management from the University of Arkansas at Fayetteville. He said he moved to Arkansas because he has had a lot of family in the state going back generations.