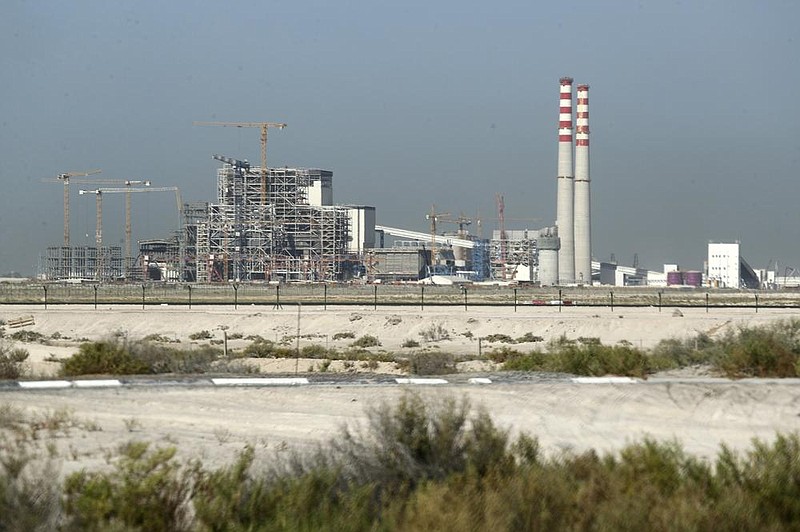 The coal-powered Hassyan power plant is under construction in Dubai in the United Arab Emirates. (AP/Kamran Jebreili)

DUBAI, United Arab Emirates -- A new wonder is rising in the southern desert of Dubai against the backdrop of Persian Gulf beaches, but it's not another skyscraper to grace the futuristic sheikhdom. Instead, it's one of mankind's oldest power sources gaining its own space on the oil-rich Arabian Peninsula -- a coal-fired power plant.

The construction of the $3.4 billion Hassyan plant in Dubai appears puzzling, as the United Arab Emirates hosts the headquarters of the International Renewable Energy Agency. It's also building the peninsula's first nuclear power plant and endlessly promotes its vast solar-power plant named after Dubai's ruler. Dubai has also set the lofty goal of having the world's lowest carbon footprint by 2050 -- something that would be affected by burning coal.

The coal plant's arrival comes as Gulf Arab nations remain among the world's hungriest for energy and during political concerns over the use of natural gas imported from abroad, concerns underscored by a yearslong dispute with gas-producer Qatar, which is boycotted by four Arab nations, including the UAE.

"Dubai was really saying we're far too exposed on gas imports, those could be interrupted by all kinds of things, the cost is very high and so we have to do something else to diversify our fuel supply and bring down the total cost," said Robin Mills, CEO of Qamar Energy, a Dubai consulting company. "They got a very competitive offer on the coal plant ... and so the decision was made."

"If they were making the decision today, would they make the same decision? Probably not, to be honest," Mills said. "But once it was committed and once it was substantially down the road, then they had to see it through."

The Dubai Electricity and Water Authority, the sheikhdom's state-run utility, did not respond to requests for comment.

Dubai, a one-time pearling port, first had an electrical power company in 1961, some 10 years before it would join others to form the United Arab Emirates. In the time since, Dubai has experienced rapid growth, fueled in part by allowing foreigners to purchase private property. Skyscrapers sprung up, soaring into a sky soon filled by aircraft of the state-owned long-haul carrier Emirates. Flashy malls enticed tourists, including one with its own ski slope.

All these wonders -- plus plants to desalinate the water needed to green its desert dunes and air-condition its interiors -- fuel Dubai's voracious appetite for electricity. In 2012, Dubai produced 36,297 gigawatt hours of electricity, according to the electricity and water authority. In 2019, that number jumped by over 10,000 gigawatt hours to 46,704 -- more power than the entire country of Bulgaria generates. That's a lot of energy, as 1 gigawatt can power roughly 300,000 homes in the West.

The demand is the same across across the Gulf Cooperation Council states, which include Bahrain, Kuwait, Oman, Qatar, Saudi Arabia and the UAE. Electricity demand across these countries is "considered to be among the highest in the world," according to Saudi Arabia's King Abdullah Petroleum Studies and Research Center.

For years in Dubai, nearly 100% of all power came from natural gas. While the new Mohammed bin Rashid Al Maktoum Solar Park provided just over 3% of demand last year, it still leaves the city-state dependent on gas -- much of it from Qatar. In February, the UAE announced finding a natural gas field containing 2.27 trillion cubic meters, or 80 trillion standard cubic feet, of gas between Abu Dhabi and Dubai, though that has yet to start producing commercially. The Emirates' new nuclear power plant remains years behind schedule.

Enter the coal plant. The Hassyan plant is being built in part by China, which describes it as a "major engineering project of the Belt and Road Initiative," a project that seeks to expand its influence in Africa and Asia. China anticipates that the plant, which has General Electric Co. involved in its construction, will meet 20% of Dubai's electrical demand.

But its construction comes as the world is warming, mainly from rising levels of carbon dioxide and other greenhouse gases in the atmosphere, according to the vast majority of peer-reviewed studies, science organizations and climate scientists. By far, most of the increase in temperature is the result of human activity, which includes burning coal, oil and natural gas. Those warming temperatures fuel extreme weather, such as powerful storms.

China says the Hassyan plant has high-tech equipment to limit its emissions, but carbon dioxide still will be emitted. Coal use has slowed in the West over environmental concerns and public protests. But in Dubai, a hereditarily governed sheikhdom where Sheikh Mohammed wields absolute power, the coal plant was approved relatively quickly.

At the time, "coal looked much cheaper than other sources of energy," said Aisha al-Sarihi, a research associate at the King Abdullah Petroleum Studies and Research Center. "Now the renewables are much cheaper than the coal itself."

Al-Sarihi warns that new costs could loom as well. Dubai's coal will need to be imported, possibly from Australia or Indonesia. Possible carbon taxes could be put on the coal, pushing down demand that in turn sees less of it mined -- further raising prices. China and India remain the world's top coal consumers.

But for now, the Paris-based International Energy Agency predicts an 8% decline in worldwide coal demand this year, the largest drop since World War II, as demand for electricity has fallen due to the economic slowdown caused by the coronavirus pandemic.

"The use of coal in power generation is squeezed by low-carbon generation, including hydro, wind, solar and nuclear power, which have been less affected by the COVID-19 crisis," the agency said. 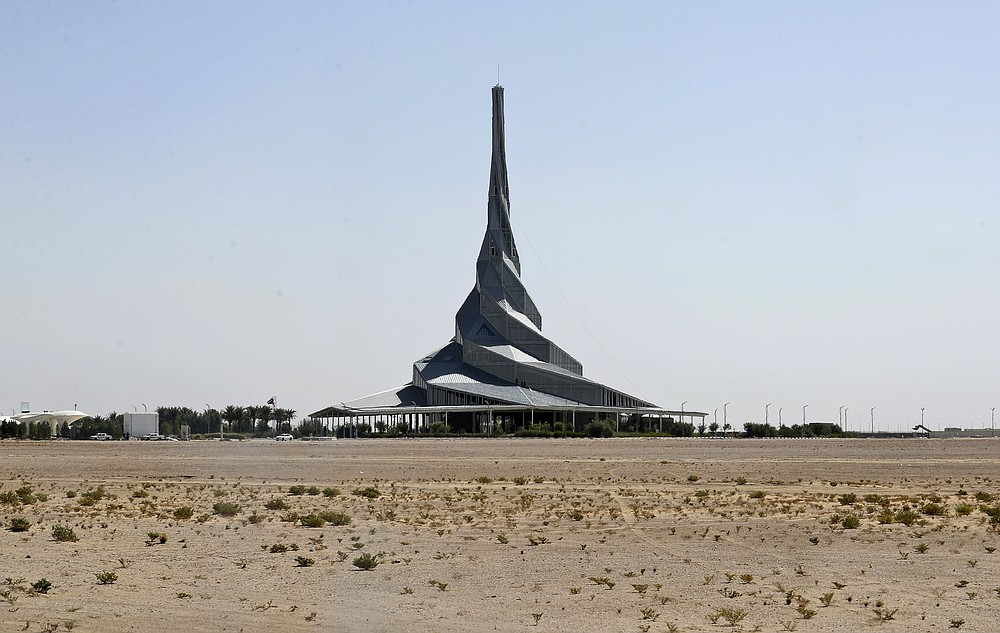 The Solar Innovation Center at the Mohammed bin Rashid Al Maktoum Solar Park marks the skyline about 50 kilometres south of Dubai, United Arab Emirates, Wednesday, Oct. 14, 2020. In the oil-rich UAE, an unusual sight is rising in Dubai -- a coal-fired power plant, a first for the region. The $3.4 billion Hassyan power plant in Dubai appears puzzling as the UAE hosts the headquarters of the International Renewable Energy Agency. (AP Photo/Kamran Jebreili) 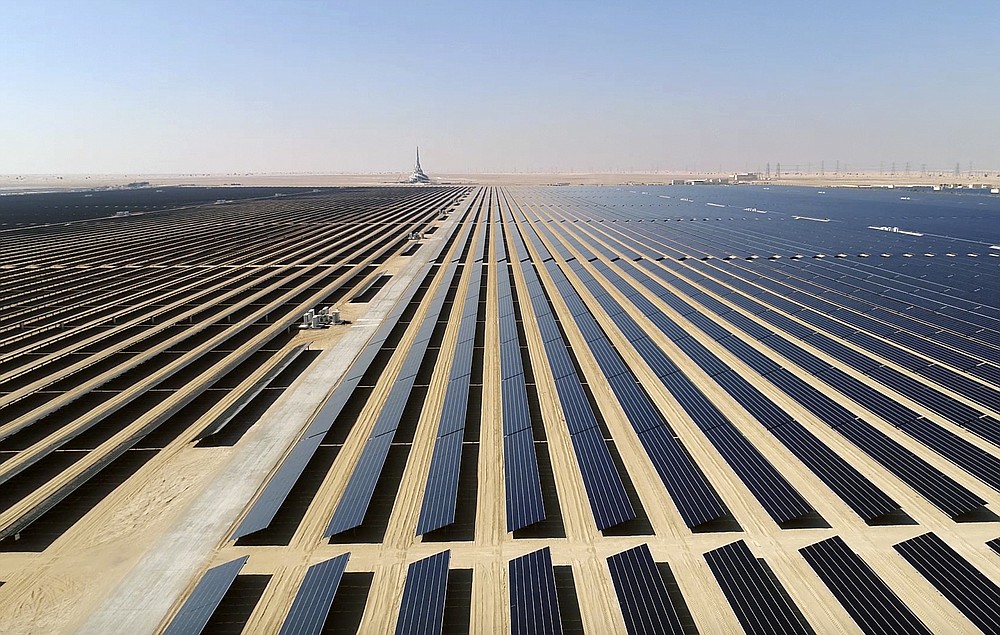 This screenshot from undated footage released by Strategy & Government Communications of Dubai, shows the Mohammed bin Rashid Al Maktoum Solar Park, about 50 kilometres south of Dubai, United Arab Emirates. In the oil-rich UAE, an unusual sight is rising in Dubai -- a coal-fired power plant, a first for the region. The $3.4 billion Hassyan power plant in Dubai appears puzzling as the UAE hosts the headquarters of the International Renewable Energy Agency. (Strategy & Government Communications of Dubai via AP)
ADVERTISEMENT